This Fantasy Warrior battle featured a father-daughter team as a League of Nil-ith Horn Orc relief force ordered to the Vangen capital of Kednvald. They were attacked en route by a rebellious Great Northern Hertog urog and myself, his unaffiliated urog ally. 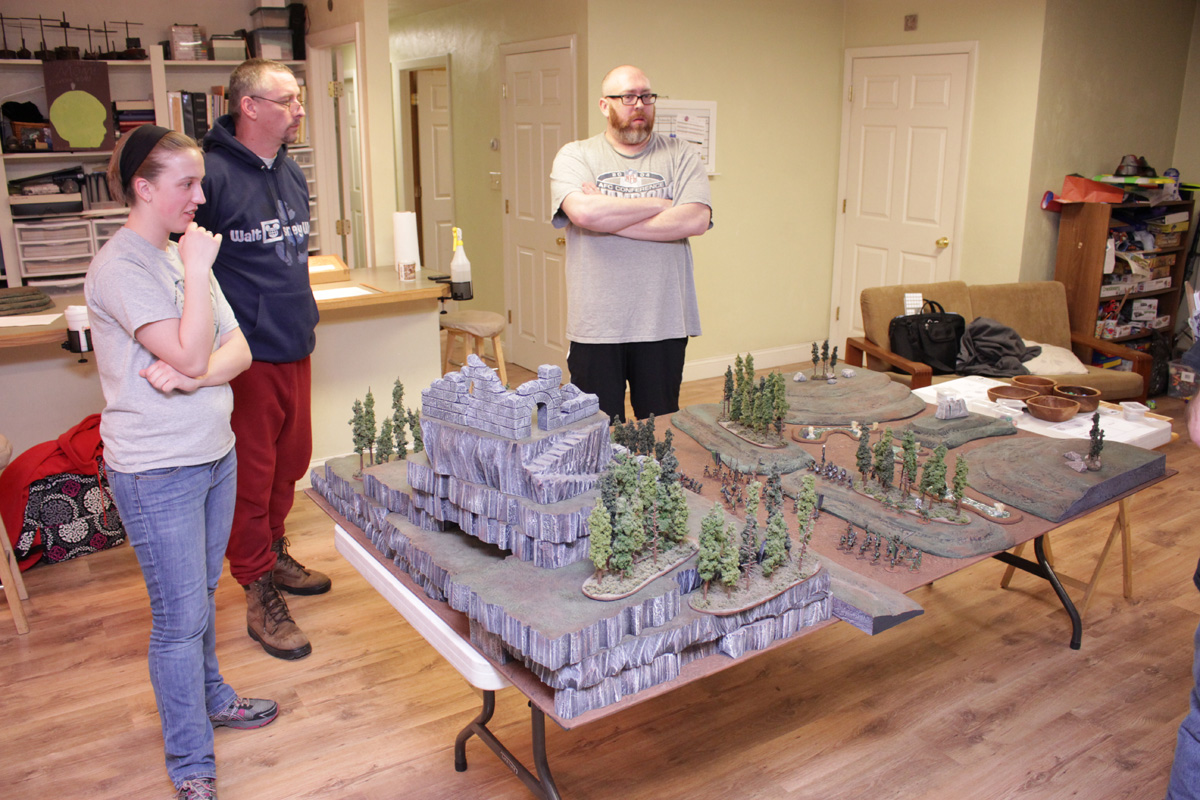 Scouting rolls decided that the League orcs form their units anywhere in the middle 2 foot stretch of the 6-inch-wide road. The Great Northern Orcs could deploy no closer than 12 inches to either side of the road. Daughter commanded a unit of elite medium infantry armed with pikes, an elite orc hero, and a unit of veteran smerdi heavy infantry with spears and shields. Father played the elite warlord, a unit of veteran medium infantry with swords and shields, and a second unit of veteran smerdi . They marched up the road: Daughter’s elite unit and hero in the front, followed by Father’s veteran unit and Warlord, his smerdi, then her smerdi followed. 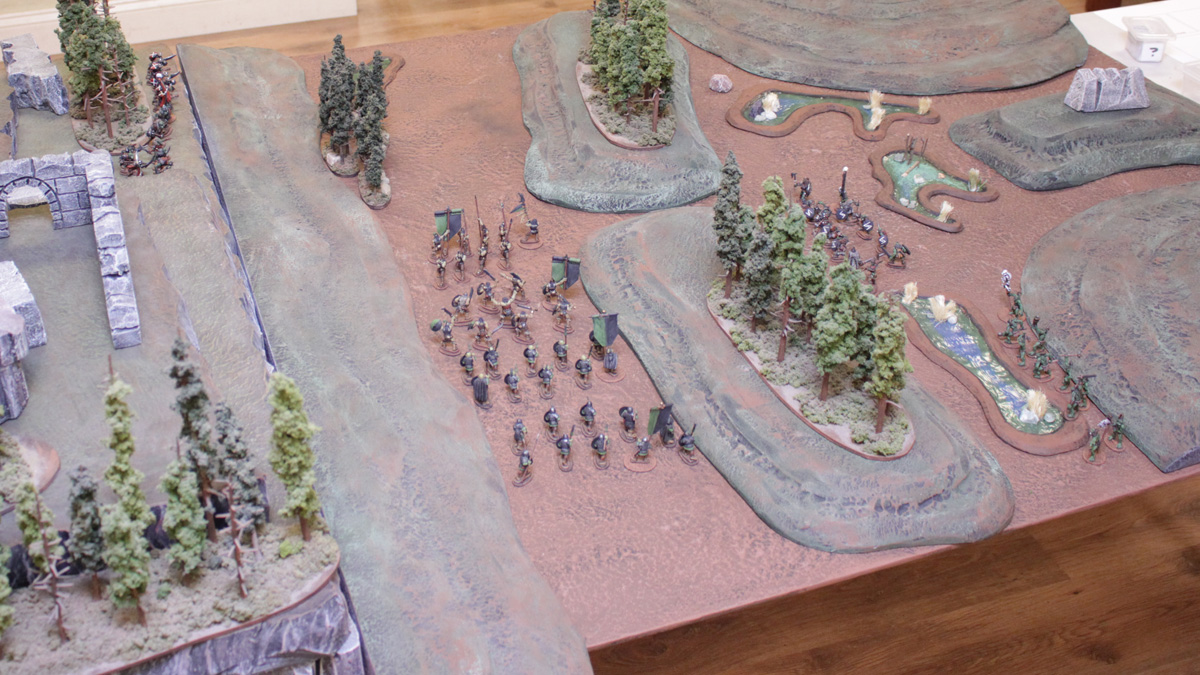 The Great Northern Hertog urog warlord had his units hidden in the woods ahead of the League of Nil-ith Horn column. A unit of elite urog valdgrafs with shields and heavy armor fought for the Hertog, along with another urog hero and his unit of orc reavers with 2-handed weapons and medium armor. I commanded an urog warlord with a unit of veteran reavers who bore shields and wore heavy armor, and an urog heroine and her unit of elite orc ambushers. 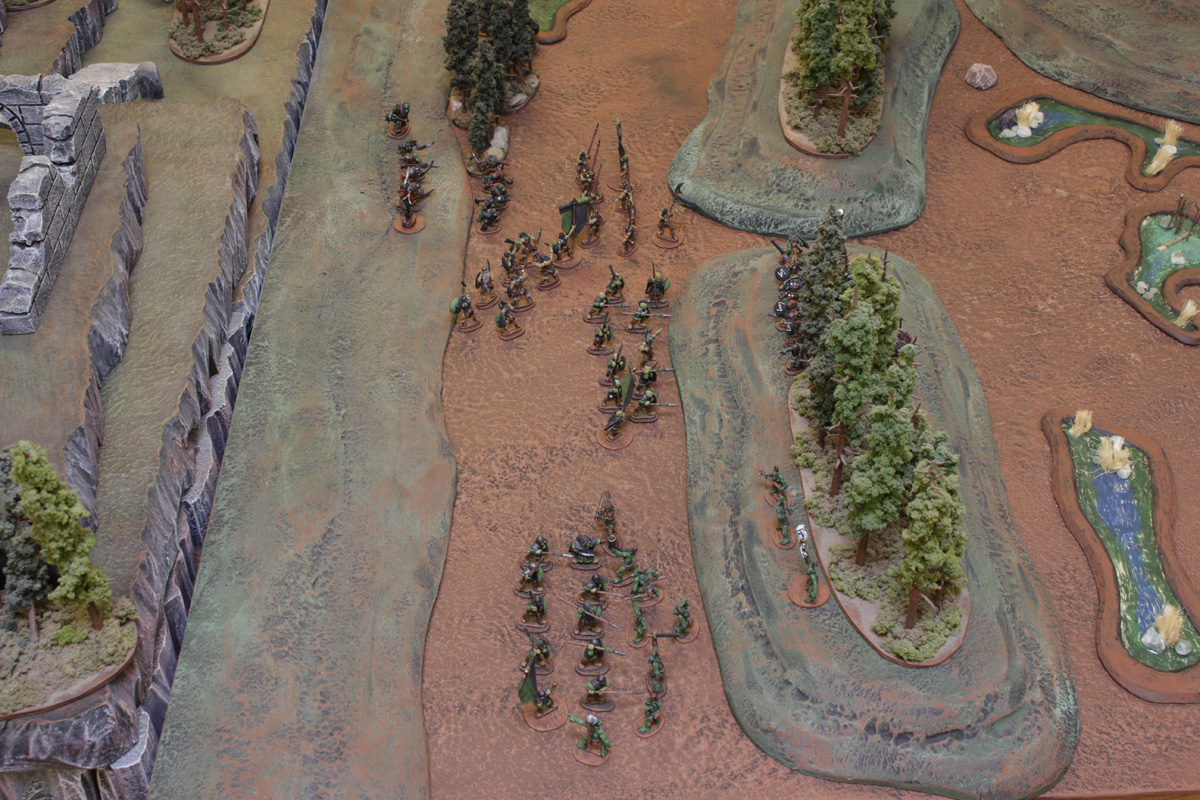 My warlord and reavers climbed the ridge for a more threatening position of the road. The elite orc ambushers displayed uncanny speed as they and the heroine attacked the unit of smerdi at the rear. There was a great clash, but few casualties. The Hertog brought his unit of elite heavy infantry around the woods and bogs, while he attacked the League of Nil-ith Horn medium unit in the road with his reavers.  Father answered the reavers in the road with his veteran shield unit, and attacked my reavers on the ridge with his smerdi infantry. Daughter sent her elite pike unit up the road at the Hertog and his elite heavy infantry. 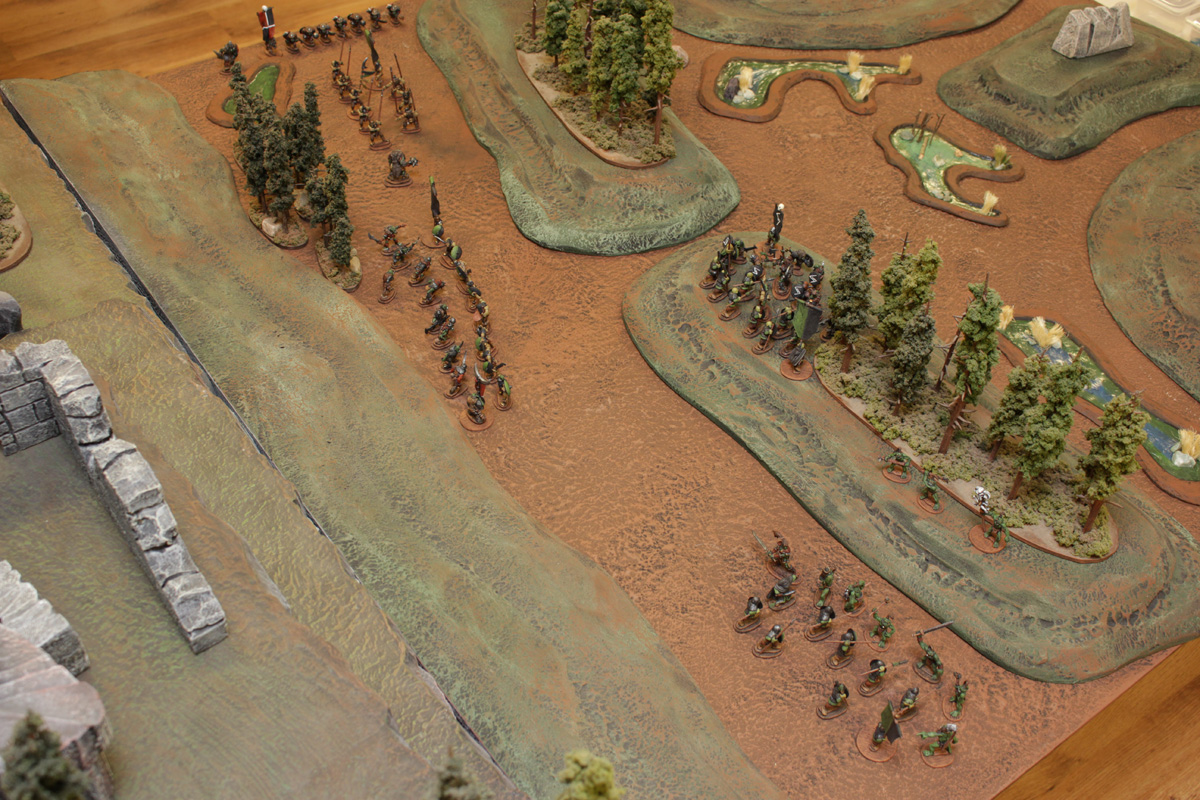 The orcs fought furiously and soldiers began to fall.

Daughter found her elite unit wiped out quickly, save for the bannerman. When he fell, the Hertog and his valdgrafs continued down the road towards Father’s unit. Father’s smerdi proved more efficient killers as they eliminated my reavers on the ridge, then rushed down the hill to support his hand and shield unit. 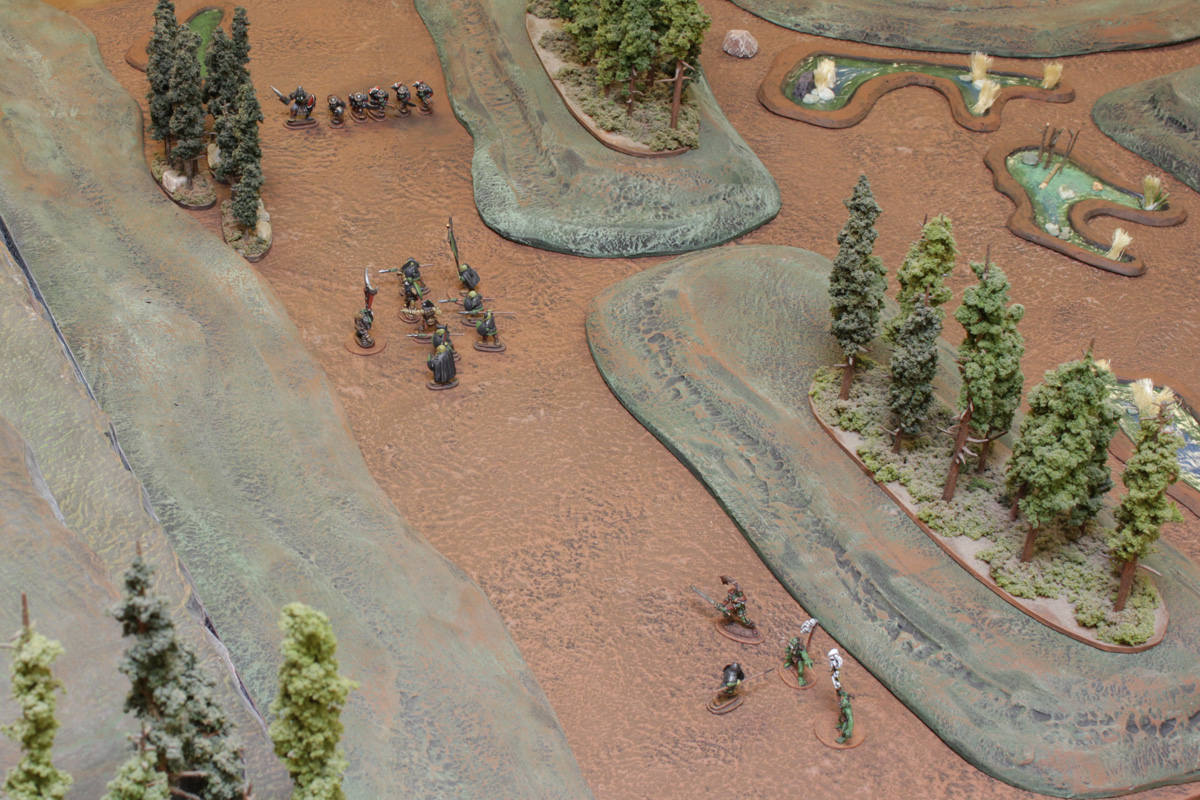 But Daughter’s smerdi were worn down by the savage ambushers and the Great Northern orcs converged on the remaining League of Nil-ith Horn forces. 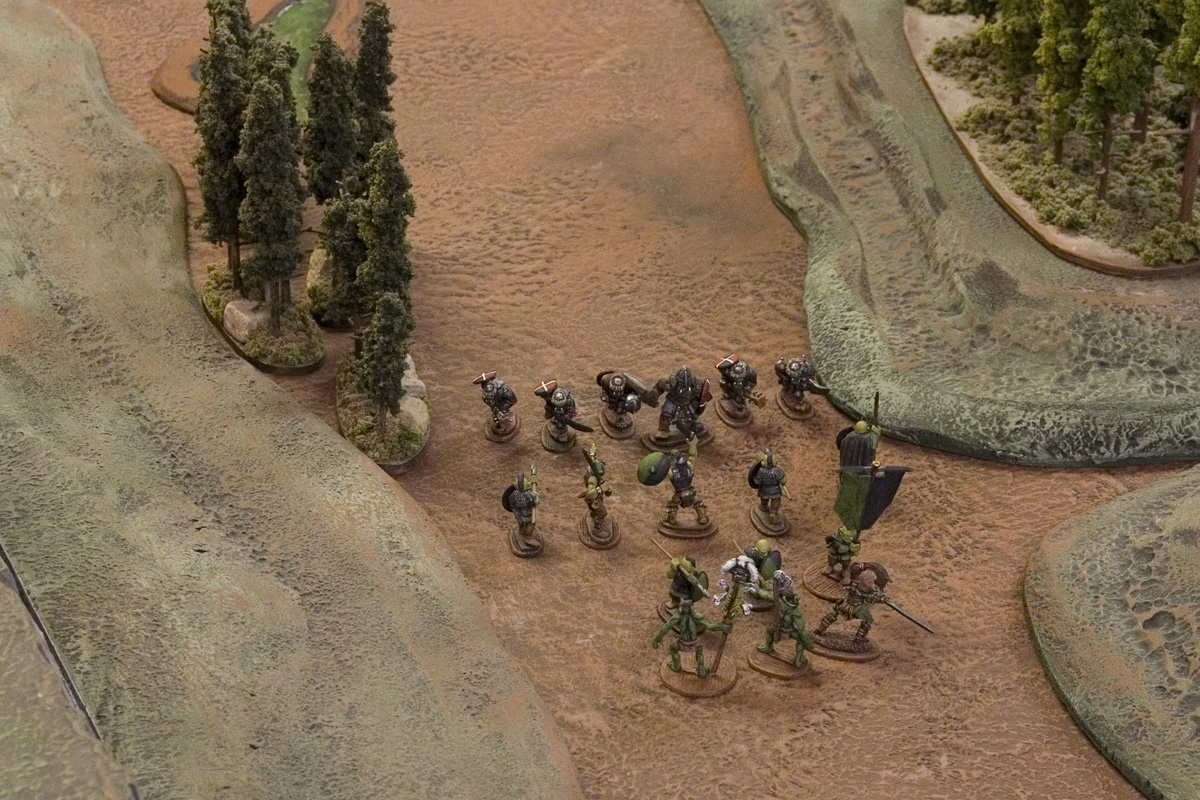 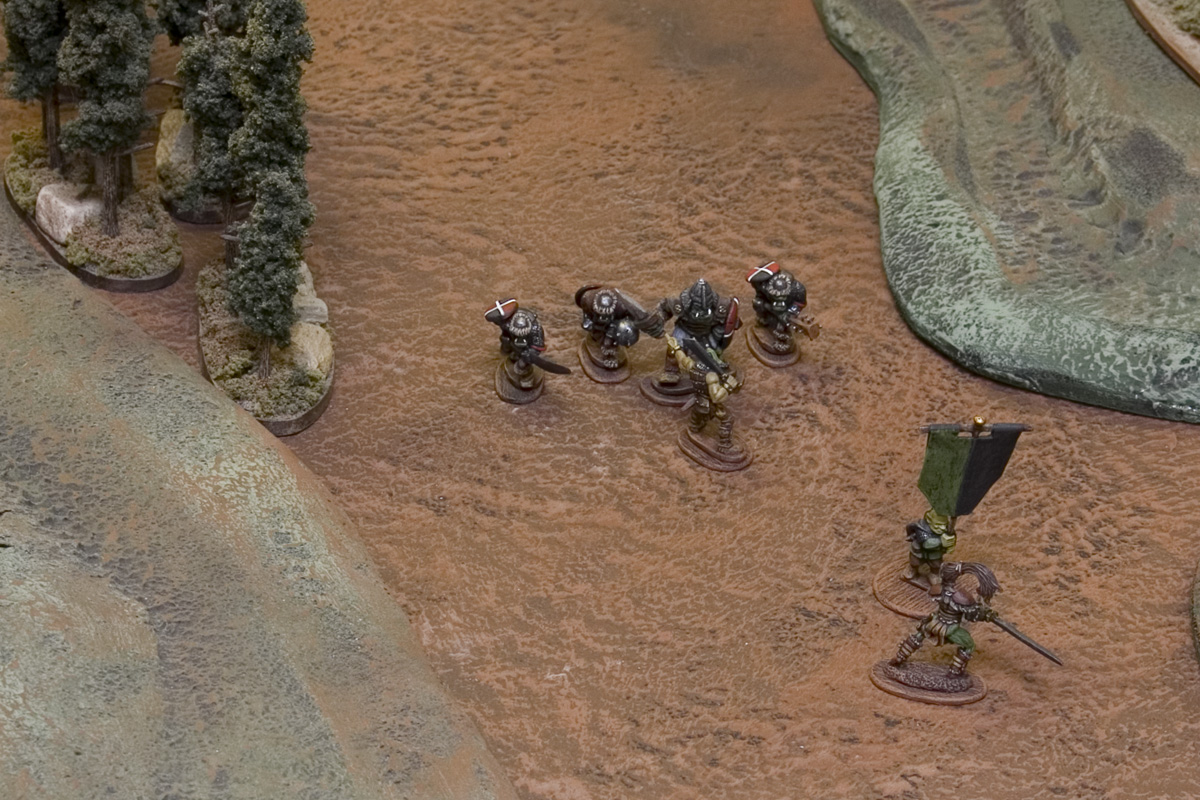 And none of that relief force reached Kednvald.

One Reply to “Ambush on the Road to Kednvald”