The boy stood before the throne, overshadowed by the great folk that argued around him. His father was there- the dashing Kildarian knight Vulmar Voclain, and his mother. The king was there, of course, and an angry man in rich dress the king called “Brother”.

The man shouted, “He took my daughter from my hold, without blessing or leave, and set up house with her in Timlin Town. They defied my rule!”

“I was of age! I had every right to pick my own man!” the boy’s mother said directly to the king.

“Your man didn’t offer me a bride-price for you,” the angry man said to her. “He didn’t swear any oaths to me in my hall. He didn’t marry you proper. That’s theft, by the old customs.”

“Your Highness, please,” said his mother. “We swore to each other in Timlin. We had a feast. We had a son.” She put her hands on the boy. “We’re not living in secret.”

“Our son is seven years old. Why does Jarl Gudmar bring this suit now, Your Highness?” questioned the boy’s father. “Why does he still seek retribution for his daughter choosing me all those years ago?”

“No more,” said the king, “I’ve heard the arguments.” The king then addressed the boy’s mother. “Is it true there was no gift for your father, and there were no oaths spoken in his own square?”

She hesitated, then nodded, “Yes, Your Highness.”

The king scoffed. “You bring to mind the rich girls that flock in my court around my son. The world is not poetry and love songs. A warrior lives and dies by his word, and by the oaths of those to either side of him!

“It’s very simple, girl. Gudmar is not only your father, but your Jarl. If you don’t have your father’s permission, and this man didn’t marry you in your Jarl’s square, your Jarl has a claim on you. Go back with your father to South Hold.”

“I don’t want her,” said Gudmar, “and I don’t want any of this Kildarian’s silver.” Gudmar paused and stared at the boy. “I want my blood. I’ll foster the bastard.”

His parents both began to shout now, and two guards from the shadows took up position in front of the king.

“Enough!” bellowed the king. “Come forward boy!” His parents fell silent and his mother’s hands tightened on his shoulders. She squeezed one last time and gently pushed him on.

“I’ve already given my judgement, so no arguing,” said the king, “and no crying either. This is your grandfather. He holds many lands in South Gautria. Under his watch, you will learn how to be a Gautrian. He’ll teach you the meaning of honor, and sacrifice for your shield-brothers. Jarl Gudmar will bring you up to be a fine warrior.

“But all men should know their lineage, and remember their parents’ names. I put it to you, boy, how will you be known? Take the Kildarian’s name, or embrace your Volsung blood?”

The boy looked to his father, then to the king. He spoke surely in the great hall with a voice larger than his seven years, so all present could hear him.

“I am Melkor Voclain, Your Highness. And I will keep my father’s name.”

Aedelfrid Volsung traveled in the wagon with the other women as her brother Thorgils had insisted. Thorgils had surprised her by allowing her to go to the spring Thing this year. He then resumed his commanding ways and refused to let her ride her horse.

Father would have let her ride, she thought. Father also would have brought her to the Thing long before she was almost twenty! But Father had been slain by the orcs ten years ago, and her brother Thorgils made Jarl of Affek, and much of her life changed. Thorgils expected her to act like a proper lady. Father had encouraged her mischievous nature, taught her swordplay,  and turned her reckless sneaky attacks at the boys into finely honed strikes that once sent even Thorgils to the ground.

Aedelfrid was still smiling at the memory when their wagon rolled to a stop. She stood up and saw a group of riders in red livery approach. 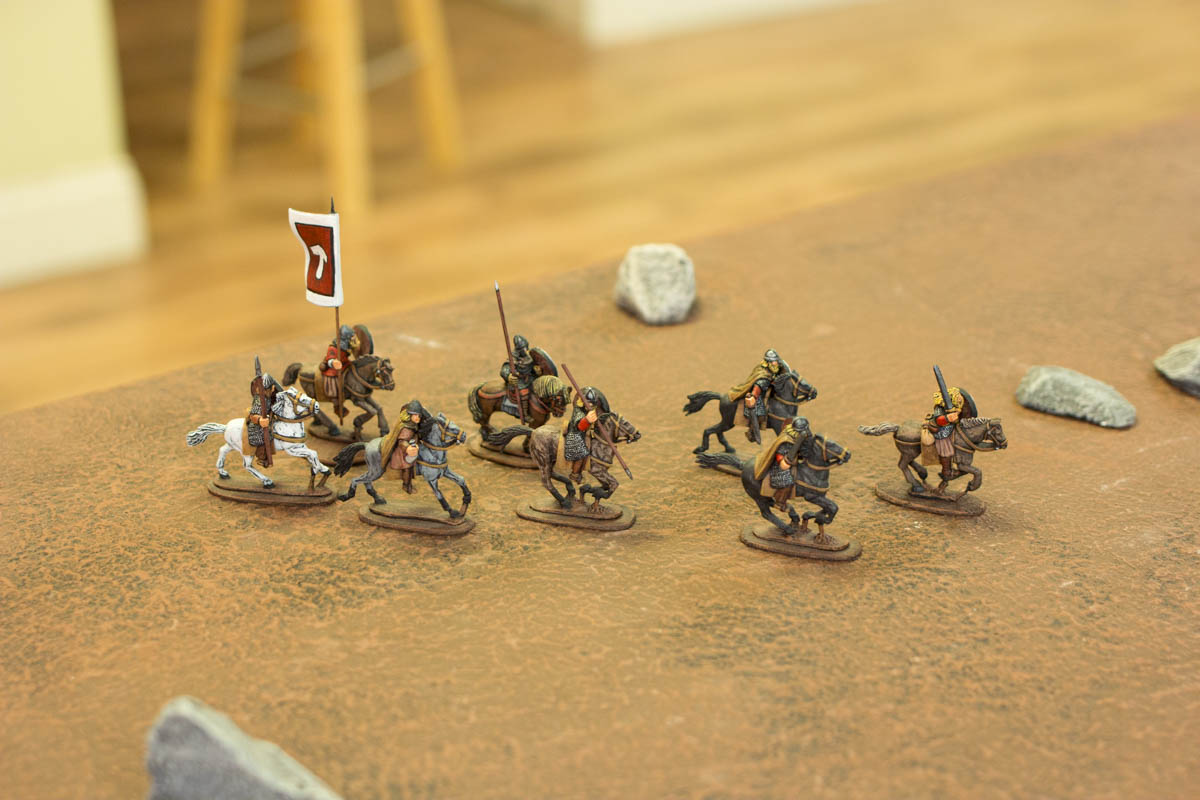 “Thorgils, good to see you at last!” said Ottar as the cavalry surrounded the wagon.

“May I present my sister, Aedelfrid Volsung? Aedelfrid, this is Ottar, son of Gudmar Volsung.”

“We thank you for your escort,” said Aedelfrid.

Ottar flashed a bright smile. “You are most welcome, fine lady.” Aedelfrid smiled politely in return, and turned her attention to Ottar’s retinue. There her gaze was held by a handsome young warrior riding behind Ottar. He sat tall and proud in his saddle, and his eyes shone over his blonde beard. Aedelfrid was so lost staring at his visage that she barely heard the shouts of alarm.

Ottar spun his horse away and led his cavalry for a group of orcs emerging from the trees.

Thorgils ordered his infantry to surround the wagon. 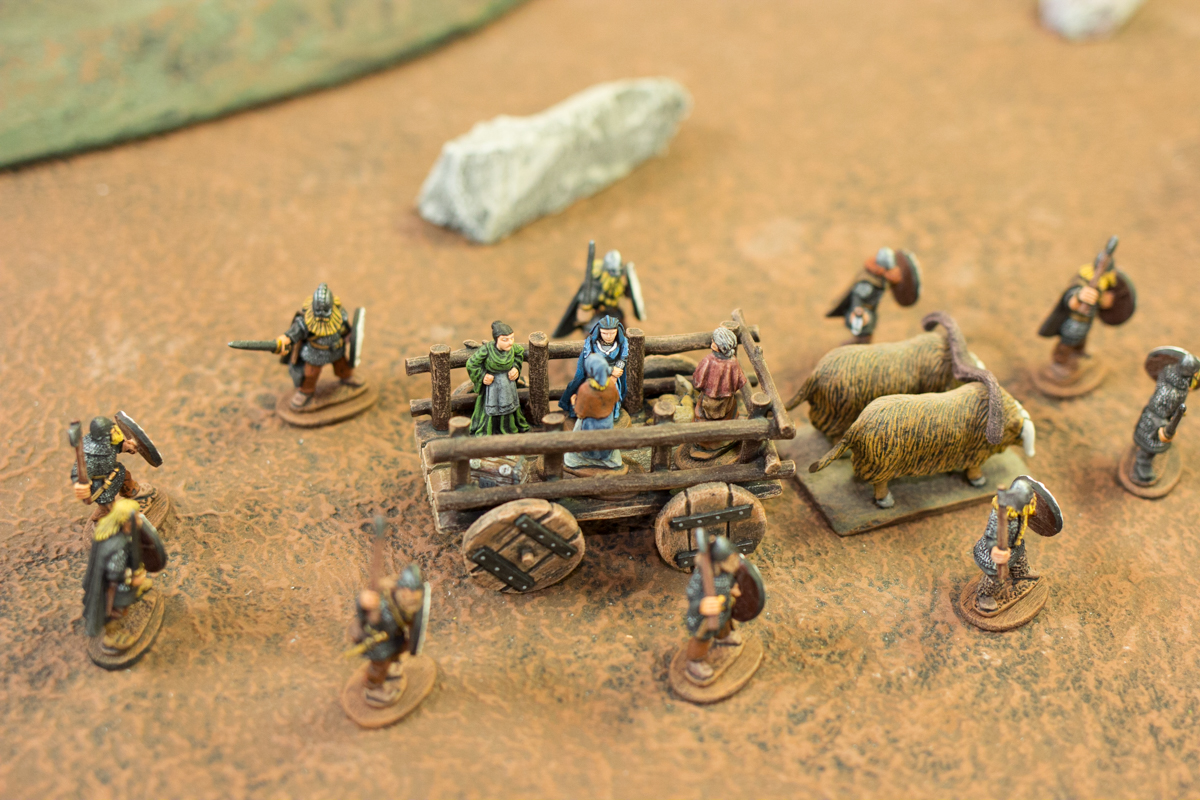 As her infantry started to take losses, Aedelfrid decided she and her ladies would be safer in the hills, so she led them from the wagon.

A huge urog burst from the woods behind them and was stopped by Thorgils’ brave men. 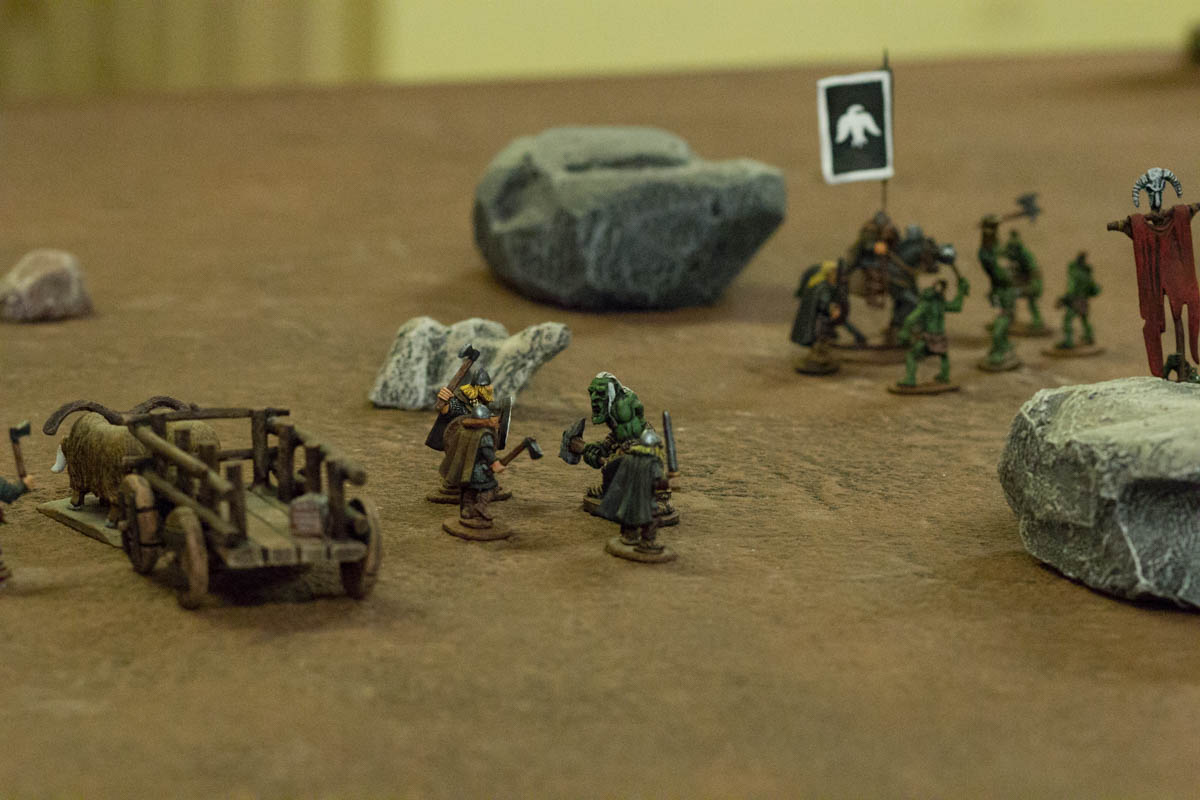 Aedelfrid and the women had almost reached the cover of the treeline when an orc shaman appeared in front of them.

The orc chanted in a savage language, and two of Aedelfrid’s ladies wailed and dropped to the ground. Aedelfrid grinned and drew the short sword she’d been hiding in the wagon since they left their home. She ran straight at the orc shaman. 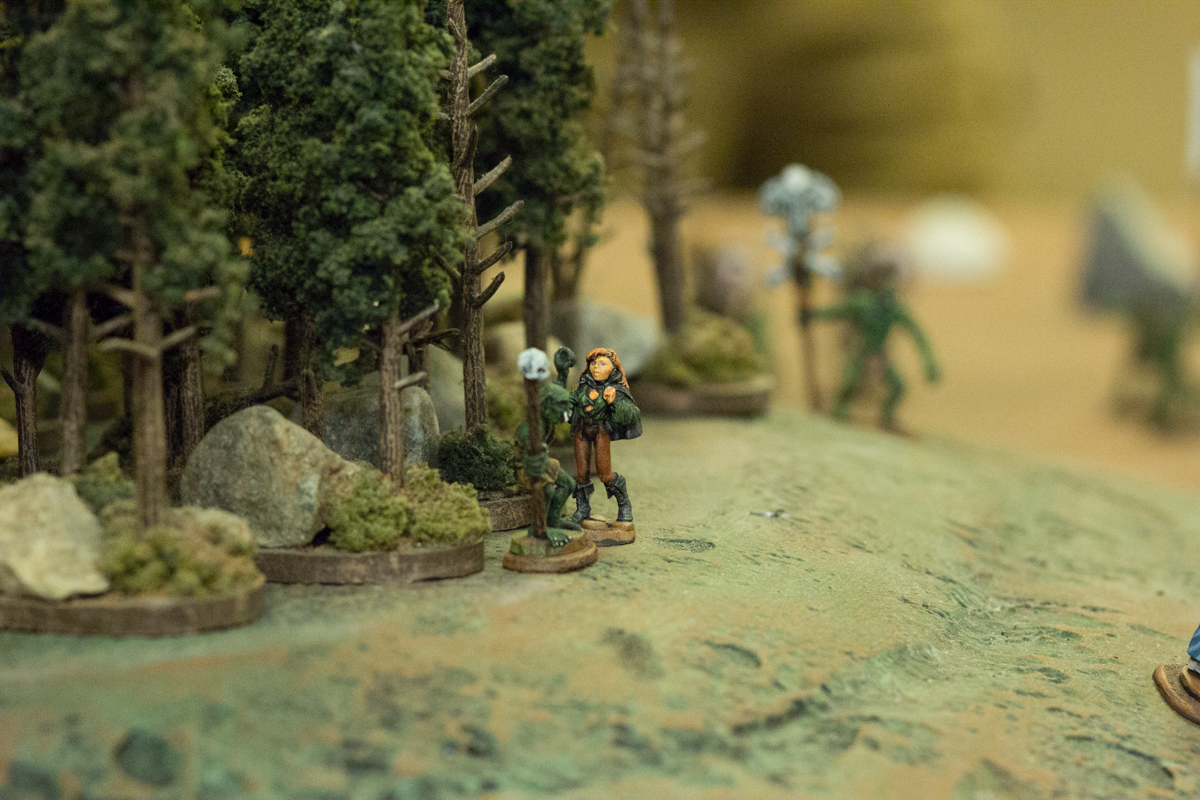 As Aedelfrid defended her ladies against the orc shaman, the cavalry under Ottar’s command engaged a cluster of nearly naked orcs.

There was one rider amongst Ottar’s thanes who distinguished himself in the melee. The blonde rider who had stared so at Aedelfrid fought valiantly. He hewed down the biggest orc, and protected his wounded comrades as the fight grew bloody.

The cavalry at last overcame the orcs and rode to the women in time to witness Aedelfrid slay the shaman. The handsome young rider was most impressed with Aedelfrid’s mettle.

Adelefrid’s brother Thorgils was less complimentary, and ordered her back in the wagon until they reached the safety of South Hold.

The group took to the road and traveled only a few hours more before they arrived at South Hold. 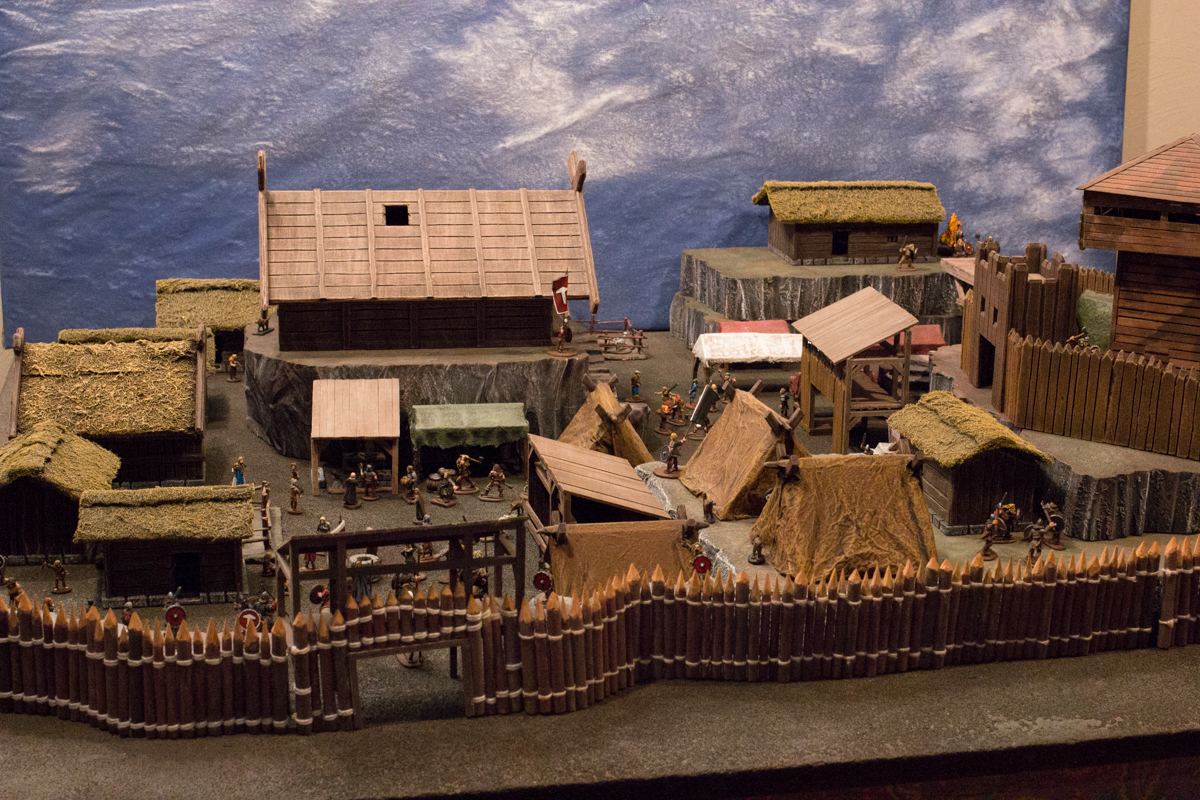 South Hold was held by Ottar’s father, Jarl Gudmar Volsung. The wooden fortification stood guard over the crossing of the Lugnan River on the road to Timlin Town. Jarl Gudmar kept safe the south-western corner of South Gautria, defending the lands from the marauding wild orcs. 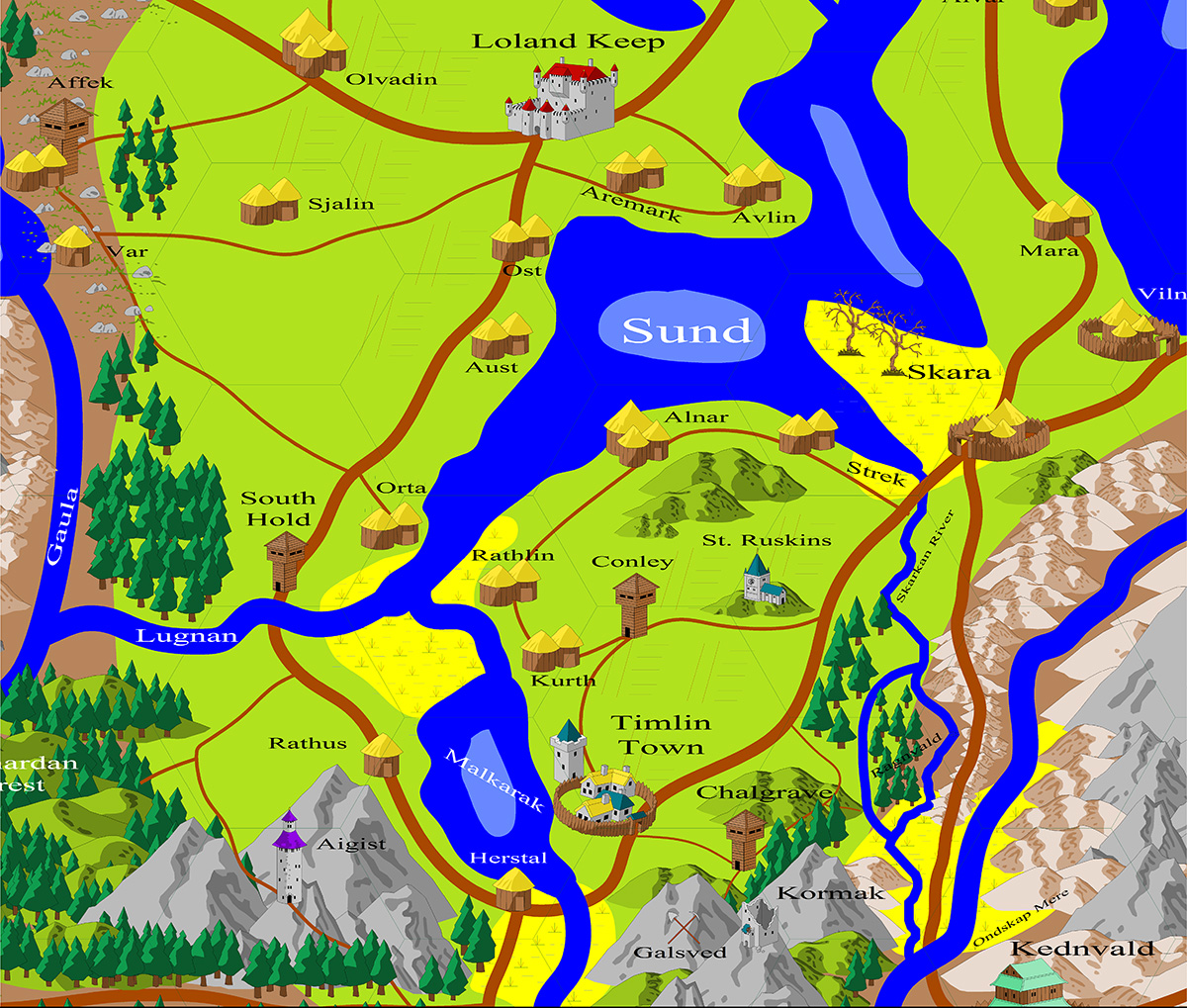 Many folk were gathered inside the palisade to meet Aedelfrid’s entourage. The handsome young warrior dismounted and quickly extended his hand to help Aedelfrid from the wagon. As their fingers met, a long glance passed between them.

“At your service, My Lady,” the young man said. “I am Melkor Voclain.”

Aedelfrid was about to reply when Melkor’s thane brothers crowded around him.

“Help the horses instead, bastard,” one chided Melkor. “This lady is your better!”

A line of servants drew up to care for Aedelfrid’s belongings. 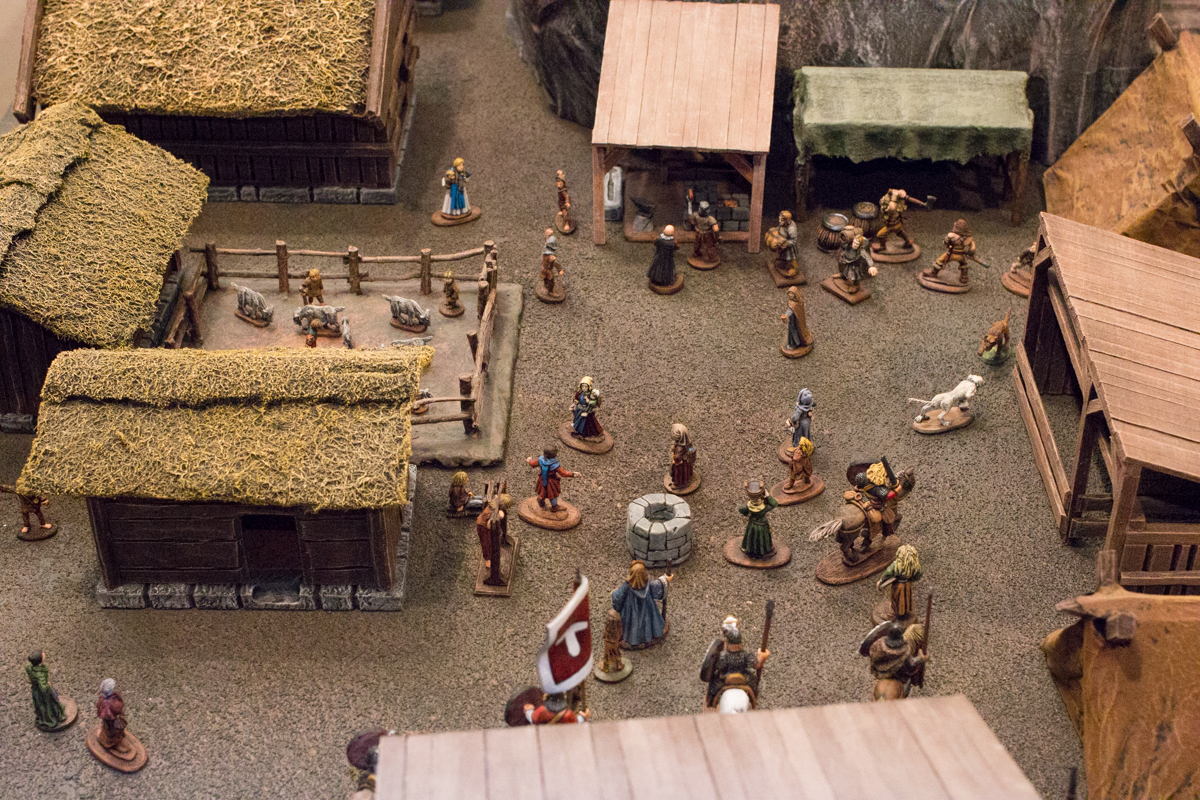 More servants offered to escort Aedelfrid to the great hall.

Jarl Gudmar was prepared for their arrival. Tables were laden with food, and many well-dressed folks filled the hall. 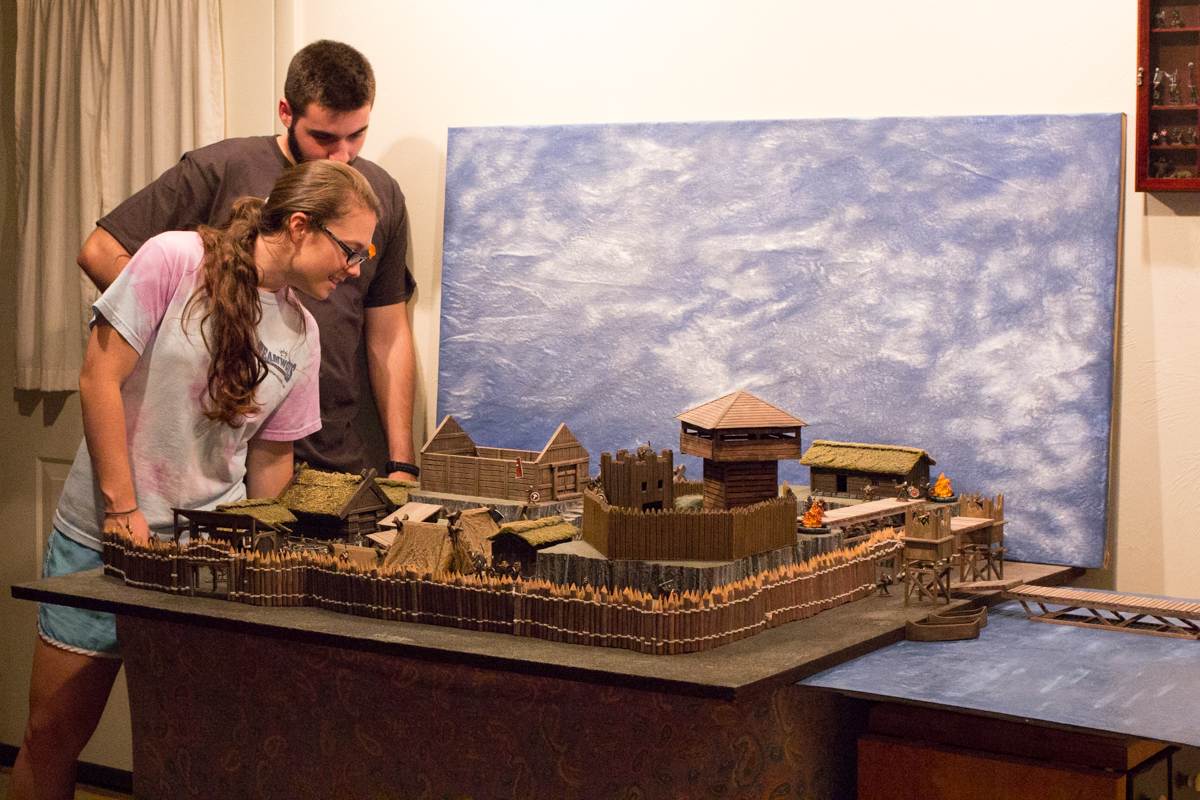 Gudmar wanted to start the feast right away.

“But where is my son Ottar?” Gudmar demanded. “He should be here attending!”

Melkor slipped out of the hall and ran down the stone steps to a small cottage. His fellow rider Skefil was sitting against the shuttered house.

“I don’t think Ottar is ready to see his father yet,” said Skefil, looking over his shoulder.

Melkor knocked on the door anyway. “Ottar! Your father is waiting!”

A moment later Ottar opened the cottage door. Behind him, a beautiful young woman sat on a bed. Ottar kissed the top of her head and left.

The young warriors strode up to the hall. Ottar threw open the wooden doors.

“Ah, here at last is my son…returned from another of his many battles with the orcs,” said Gudmar.

Gudmar stared hard at his son. “Yes, Ottar. Jarl Thorgils will be traveling with us to the Thing. There at the stones, he and I will seek the blessings of the priests. But first, Jarl Thorgils has come here to our hall to formally accept our proposal.”

“Jarl Thorgils has agreed to let you marry his sister, the Lady Aedelfrid.”

“Ottar,” said Gudmar. “She is beautiful, and of the Volsung blood. Your children will be born to rule!”

“But Father!” Ottar gave up. His father Gudmar was one of the most powerful men in South Gautria. There was no compromise with him. Ottar grabbed a bottle from a near-by table and stormed out of the hall.

The crowded hall was silent as the door slammed shut.

“Grandfather!” Melkor spoke out. “I would be honored to marry Aedlefrid. If you need someone in the family-”

“You Kildarian bastard,” said Gudmar, “you are not made of the stuff to have a true Volsung lady. You’re only half Gautrian, let no-one here forget that!”

Gudmar turned to Thorgils and Aedelfrid. “Ottar is still hot from battle. He will treat you better in the morning. For tonight, feast!”

The servants filled cups and plates, and the guests enjoyed the engagement celebration.

Ottar went through the dark back to the little cottage, there to console himself and his lover.

“I was to be your wife, Ottar,” Asrid moaned. “You promised me your father would warm up to me!”

“I’m sorry, Asrid,” said Ottar. “It’s good politics for my father to have me marry Aedelfrid. They are a noble family-”

“Oh ‘noble’ Aedelfrid?” said Asrid. “It would have been better if you had let the orcs kill her on the road today!”

“Shhh, don’t speak so,” said Ottar. “You’ll always have me, even if I have to marry another first.”

“If you think I’ll be happy as your second wife…” started Asrid.

“You’ll be happy with me, I know.” Ottar silenced Asrid’s protests with another kiss.

Aedelfrid was not much happier with her brother after the feast.

“You could have asked me!” she said to Thorgils. “I’m a grown woman, even though you don’t treat me like one. You shouldn’t have surprised me like that in front of my father-to-be.”

“Of course! I know what duty is. Ottar’s got a good name, and he fights well too. I’ll make my promise at the Thing to marry him,” said Aedelfrid.

“Fine. Then speak your words right, and by the gods, stay clear of that horse-boy with eyes for you!” said Thorgils.

“Melkor?” Aedelfrid asked. “I can’t help what he does. I thought it was very noble.”

Thorgils scoffed. “Impetuous and brash is what I’d call it. Stay away from him.”

Aedelfrid sighed and snuffed her light in answer to her brother.