The days before the Allthing were a blur for Aedelfrid Volsung in her betrothed’s home of South Hold. Her husband-to-be Ottar and the other cavalry were busy on patrol. The servants and bonders in the village gathered provisions for the imminent campaign against the Varak orcs. Aedelfrid’s brother Jarl Thorgils kept a close eye on her and on the young rider Melkor who had shown such interest in Aedelfrid.

Aedelfrid was relieved when at last they left South Hold and traveled to the Allthing. 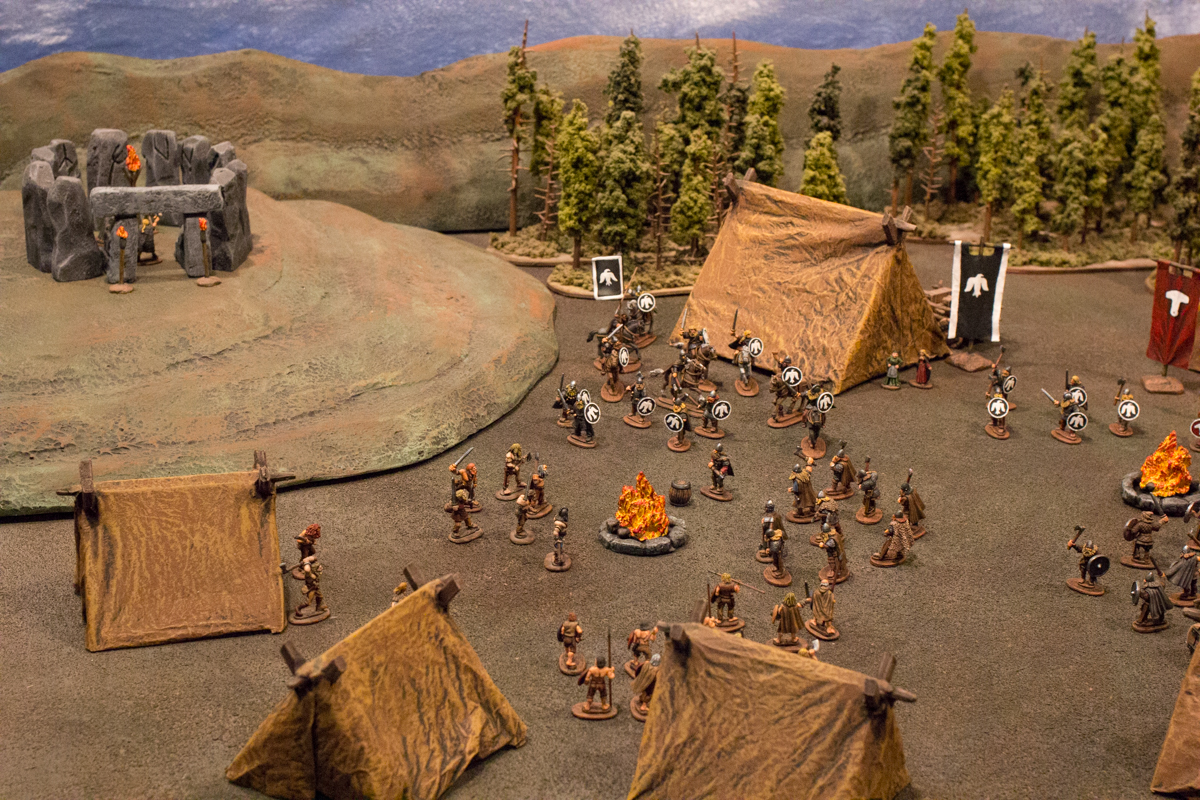 The Gautrians made their camps by the ancient temple.

As soon as Jarl Gudmar’s people set up his tent, an angry Jarl Gunnkel demanded audience with Gudmar. Jarl Gunnkel was furious, and ranted that his daughter had long ago been pledged to Gudmar’s son Ottar. 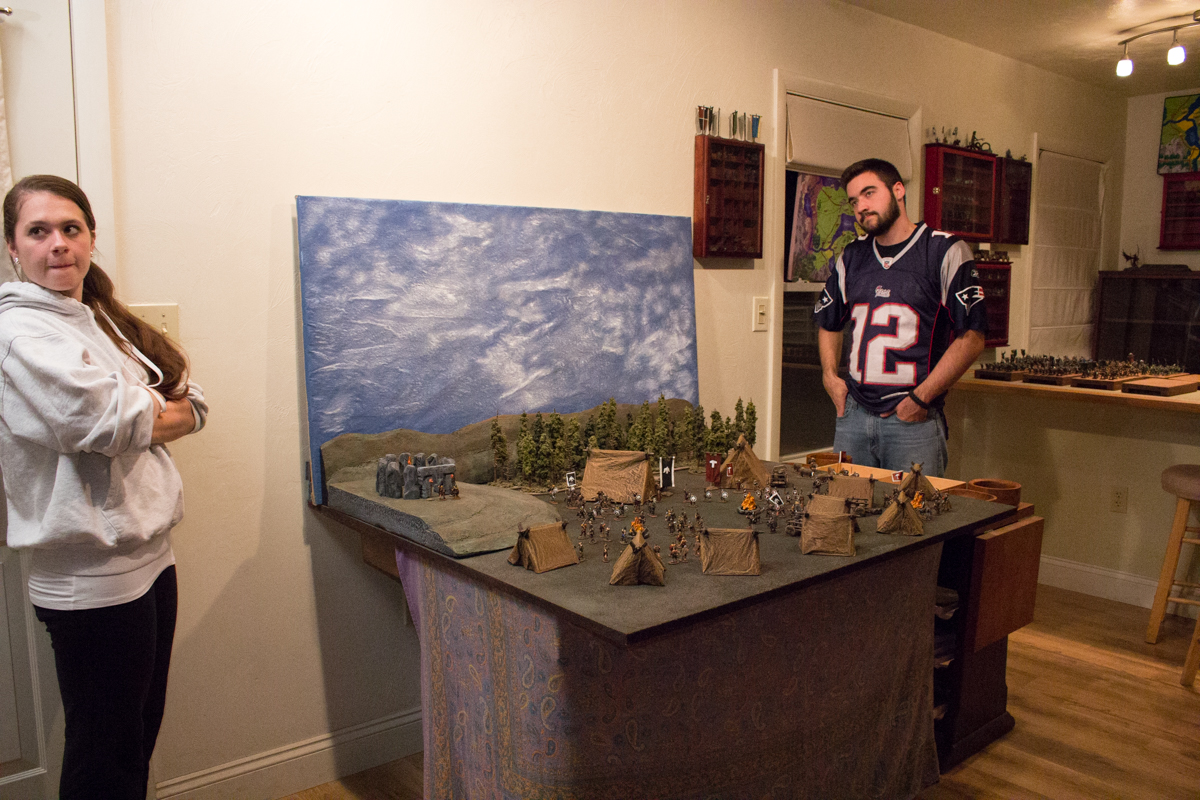 “There is a forest full of orcs ready to descend on our homes and holdings,” answered Jarl Gudmar. “That concerns me much more than your daughter’s wounded pride.”

“My men are here to fight the orcs,” said Jarl Gunnkel. “But I will not forget this slight against my family.” Gunnkel stormed out of the tent.

Later that night the Gautrian priests summoned the people to the foot of the ancient stone temple. The jarls who called the Allthing, Gudmar and Thorgils, climbed the hill and presented Ottar and Aedelfrid to the holy ones. 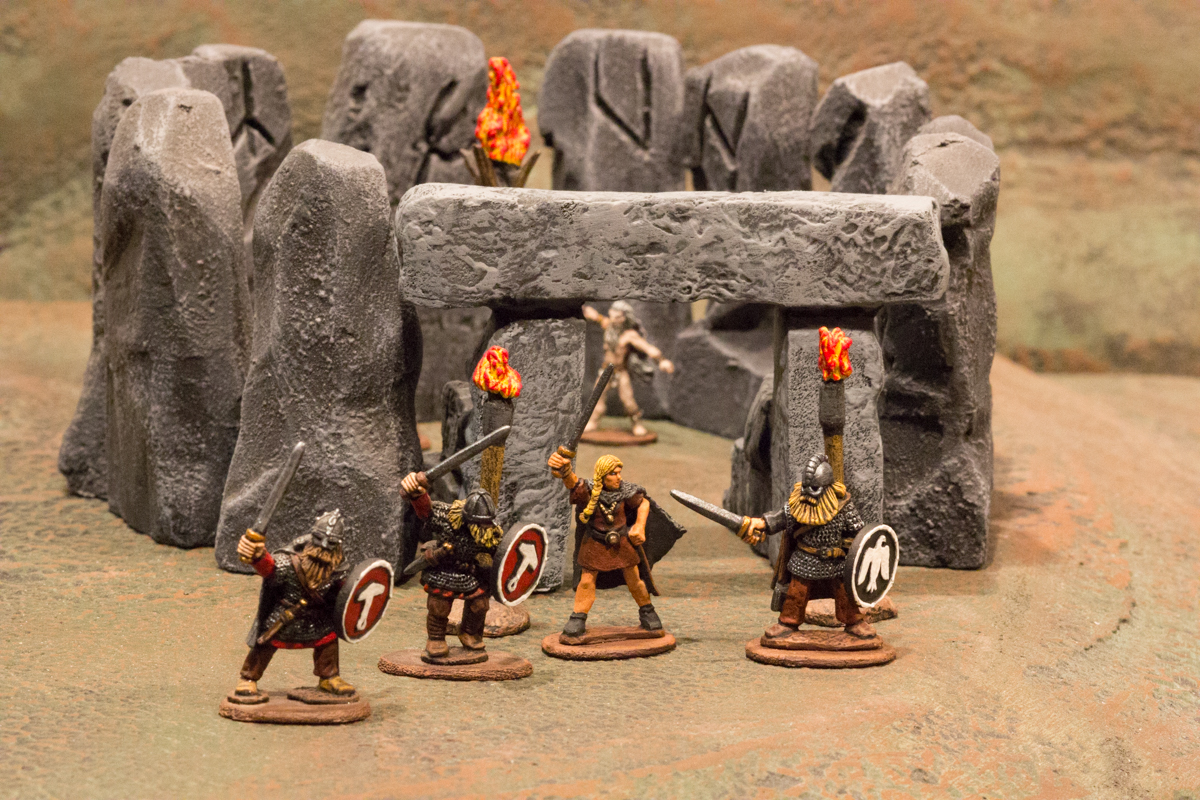 Ottar and Aedelfrid are brought before the priests to seek blessings for their marriage.

The old man gave consent and there were muted cheers in the crowd.

Later that night during the drinking, Melkor was approached by Frodi and Gudlaug, two bondi from the village of Rathus. 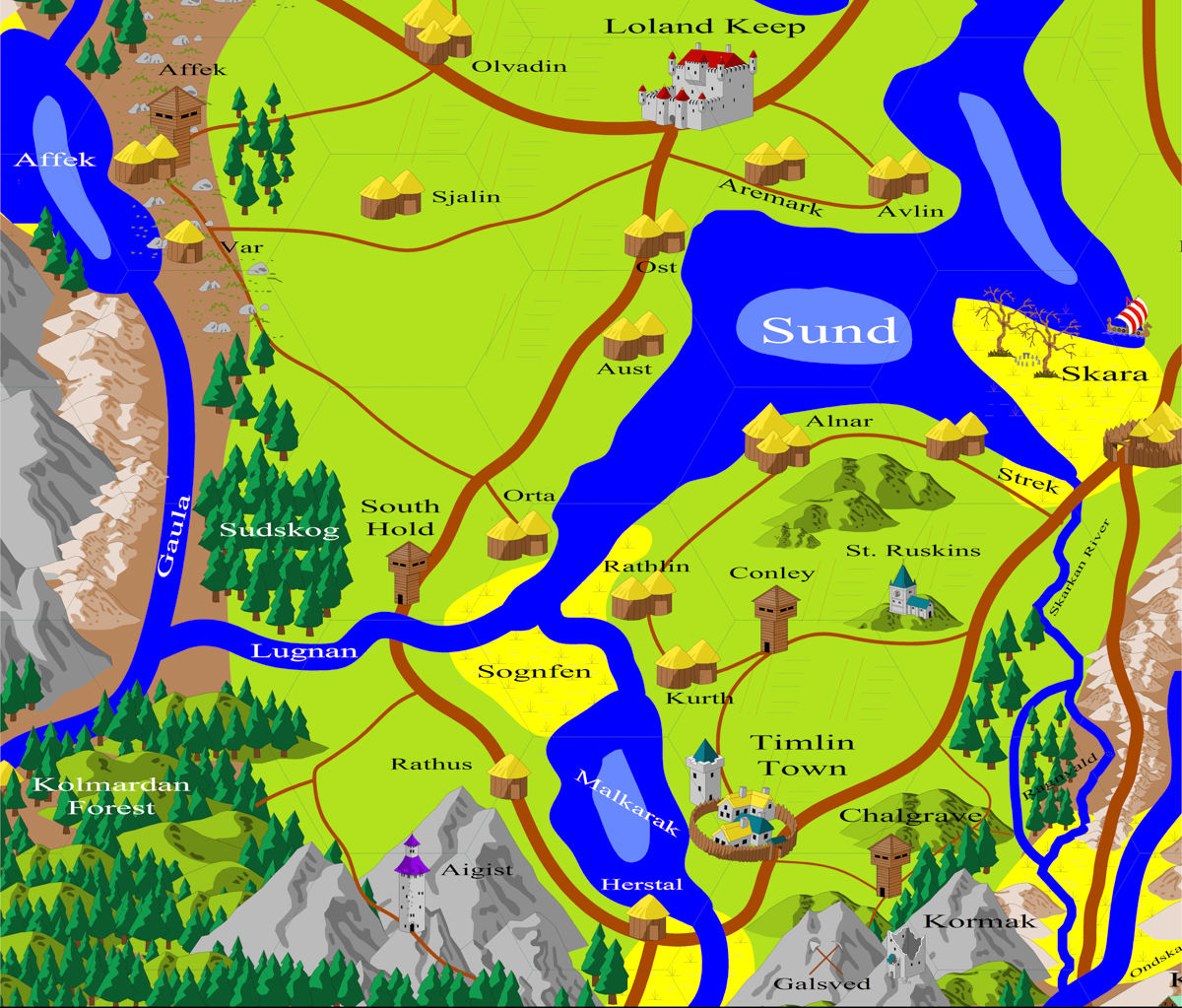 South Gautria and Lands of Timlin

Rathus was the holding of Melkor’s father, Baron Vulmar Voclain, but Baron Vulmar had sent no men to the village for a year.

“There are bandits in the mountain stronghold of Aigist that raid us. Our women are being taken, our livestock and crops stolen! Help us deal with these men, young Voclain.” 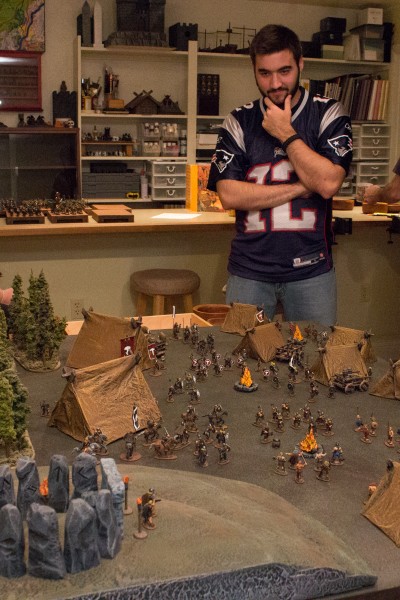 Melkor pondered the troubles of the bonders from his father’s village of Rathus.

“I ride together with my shield-brothers from South Hold, but I will see that you have aid,” Melkor quickly decided.

Melkor found Ottar drinking by a huge fire, and told him of the bandits plaguing Rathus.

“Father has ordered our cavalry to return home,” said Ottar sourly. “We are to guard South Hold. Father and the other Jarls are headed to battle with the orcs in Sudskog Forest and he expects me to cower in the palisade!”

“Rathus is almost in your father’s lands,” said Melkor. “A threat to that village could be a threat to us…”

When Aedelfrid heard the plight of the people of Rathus, she was in full support of the plan. “My fighters from Var will join your cavalry to aid these villagers.” 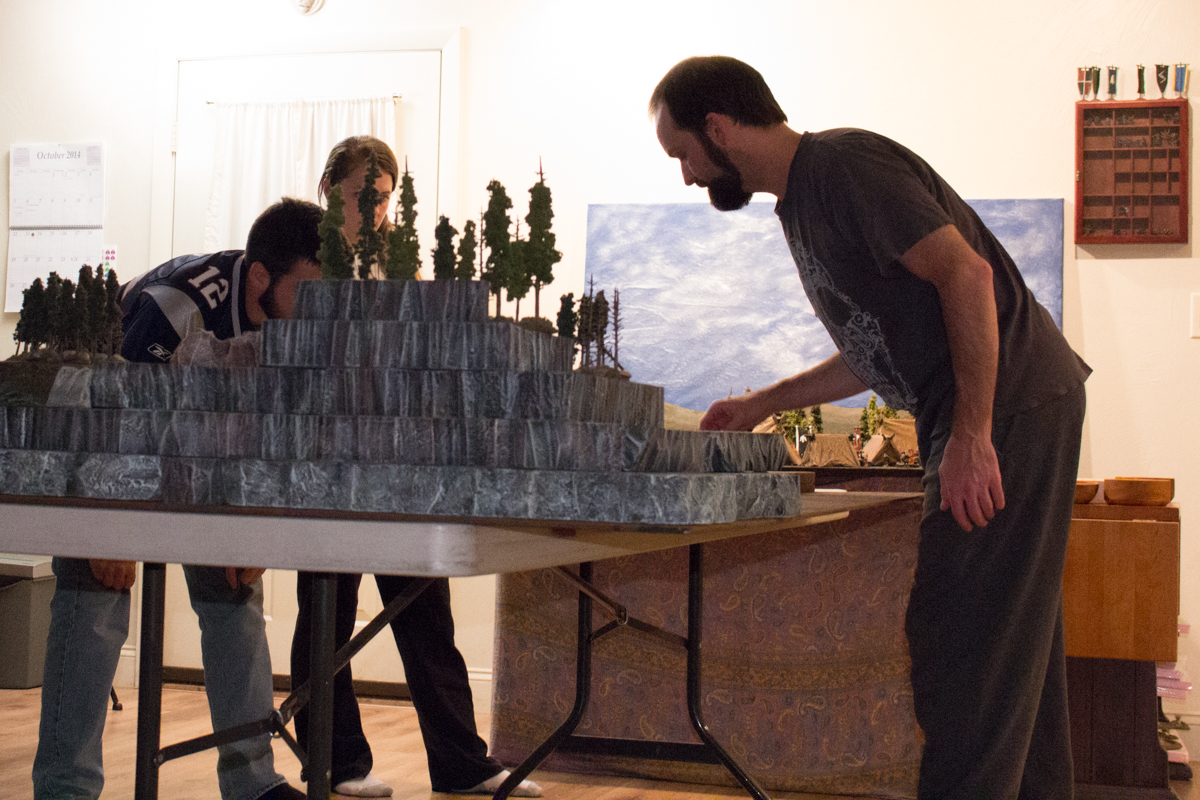 Aedelfrid and Melkor followed the bondi from Rathus to the foothills of Aigist Mountain.

Frodi and Gudlaug led them to a cave the bandits were occupying. 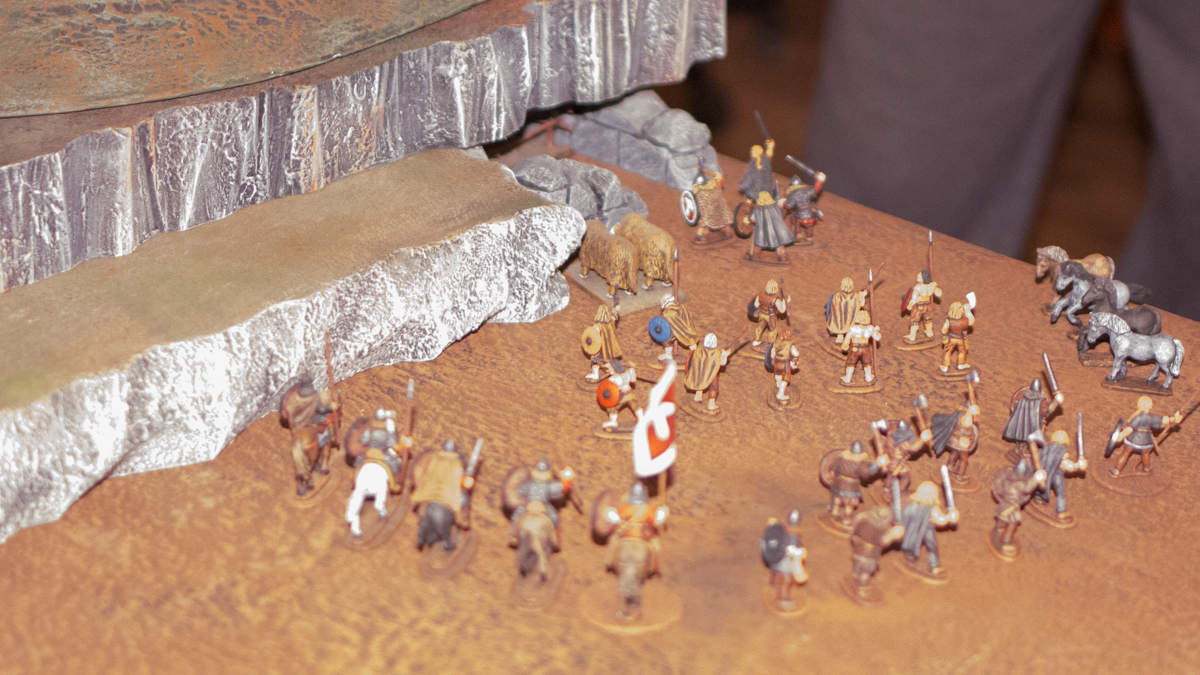 The cavalry from South Hold, bonders from Var, and militia from Rathus surrounded the entrance to the bandit’s lair.

Aedelfrid, Melkor, Ottar and their shield-brother Skefil dismounted. They lit torches and boldly walked into the dark cave. A howl cut through the darkness and a shaggy shape crashed through the circle of torchlight and struck Ottar a heavy blow. Melkor swung back, and felt his sword sink into a man. Aedelfrid heard more howls from outside the cave. 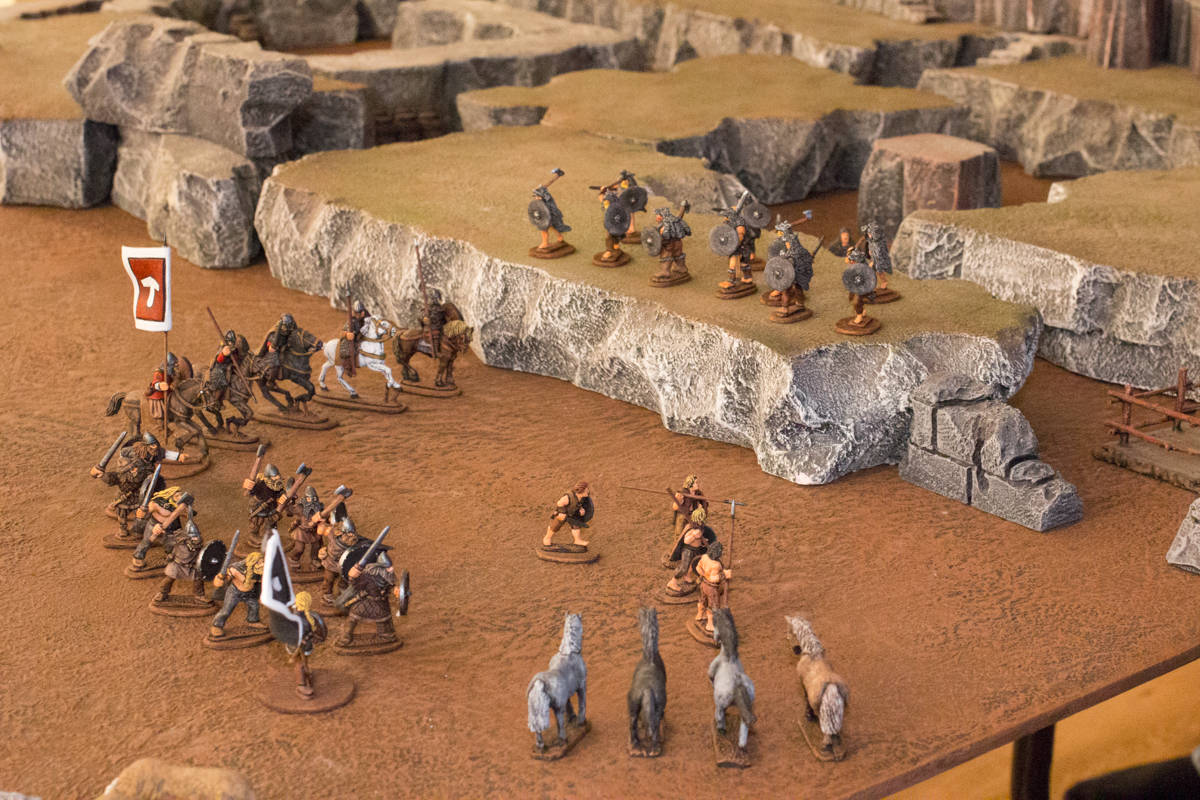 Several ulfhednar appeared on the cliffside and rained spears on the surprised militia men. 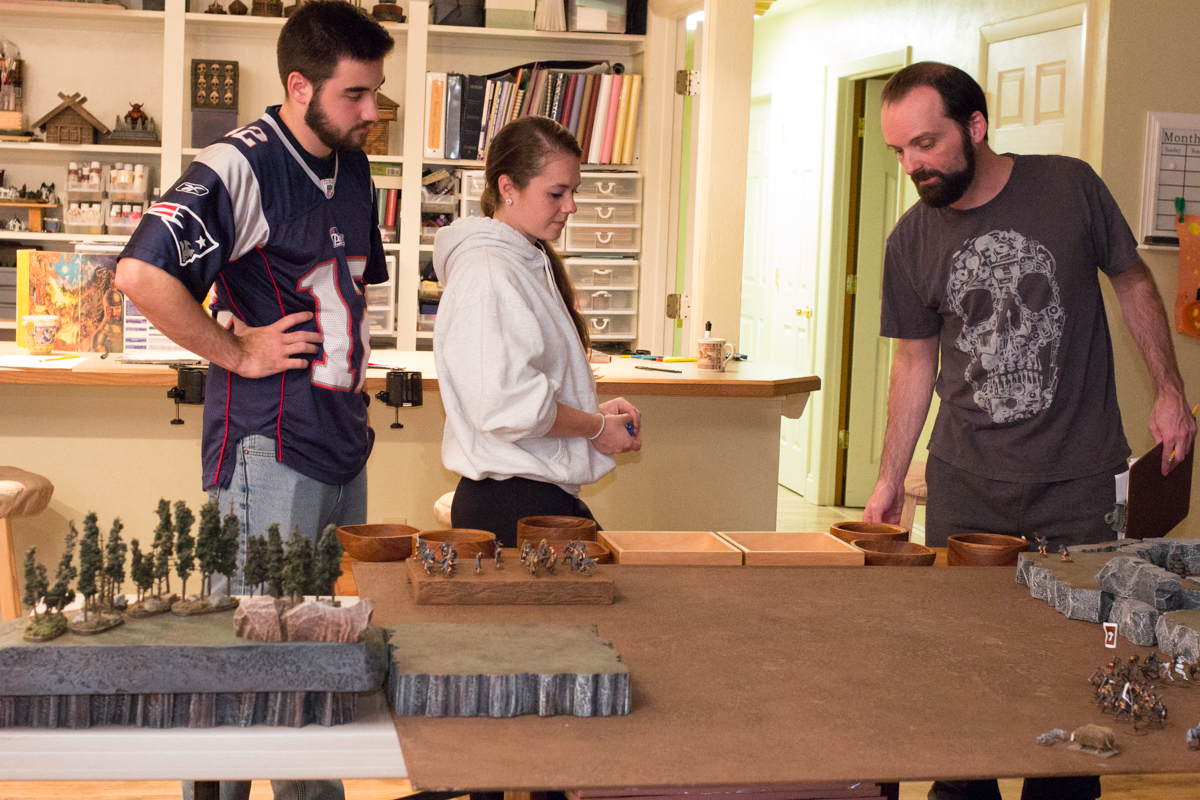 Aedelfrid and Melkor watched as the half-naked militia from Rathus took heavy losses from the ulfhednars’ missiles.

More howls echoed from the hills and a unit of berserks showed themselves in the rocks. They jumped down and ran at the cavalry. The cavalry charged to meet them with disastrous results. 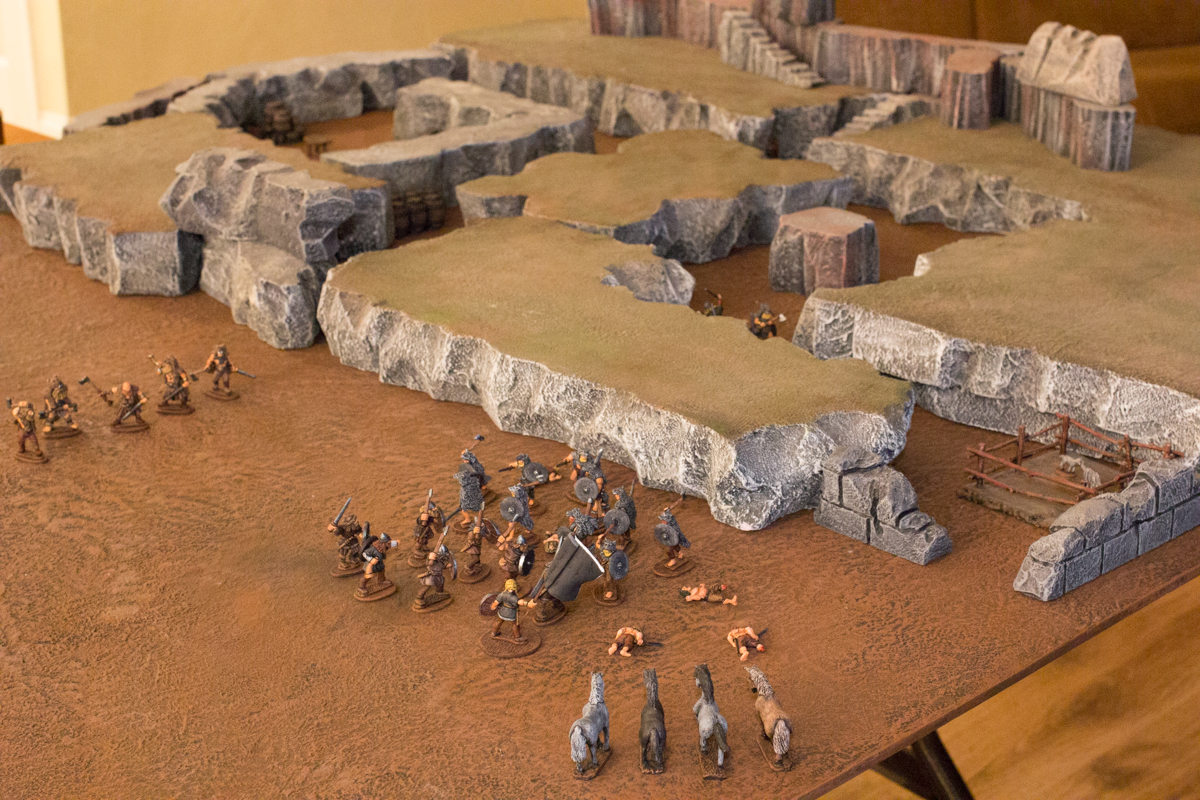 The berserk unit destroyed the cavalry while the men of Var stood strong against the ulfhednar.

Inside the cave, another fur-cloaked figure rushed at Ottar. Ottar fell to the bandits’ wild axe-blows. 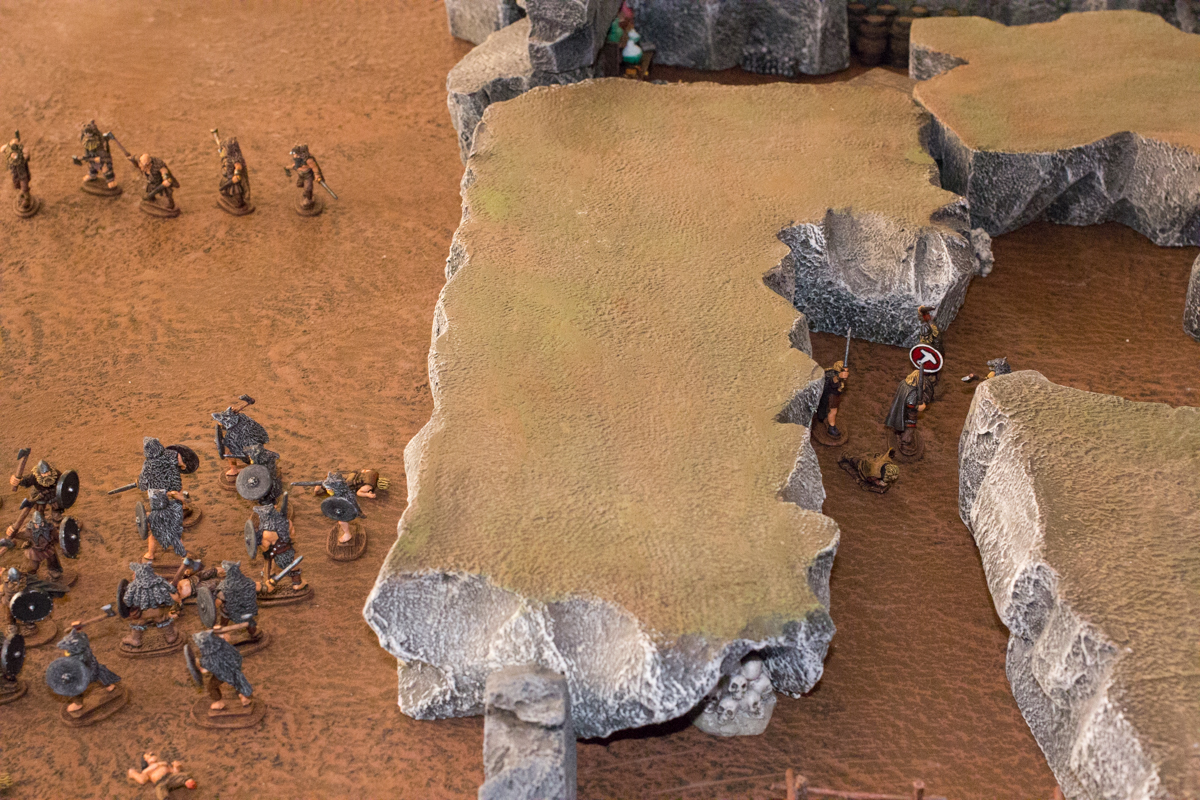 Melkor and Aedlefrid fought the bandits over the wounded Ottar.

One bandit was slain, but the other wounded Skefil.

Melkor warded off the axe-blows and Aedelfrid stabbed the last bandit.

Melkor and Aedelfrid helped their injured companions to the mouth of the cave. They were able to get Skefil battle-ready, but Ottar was badly hurt. 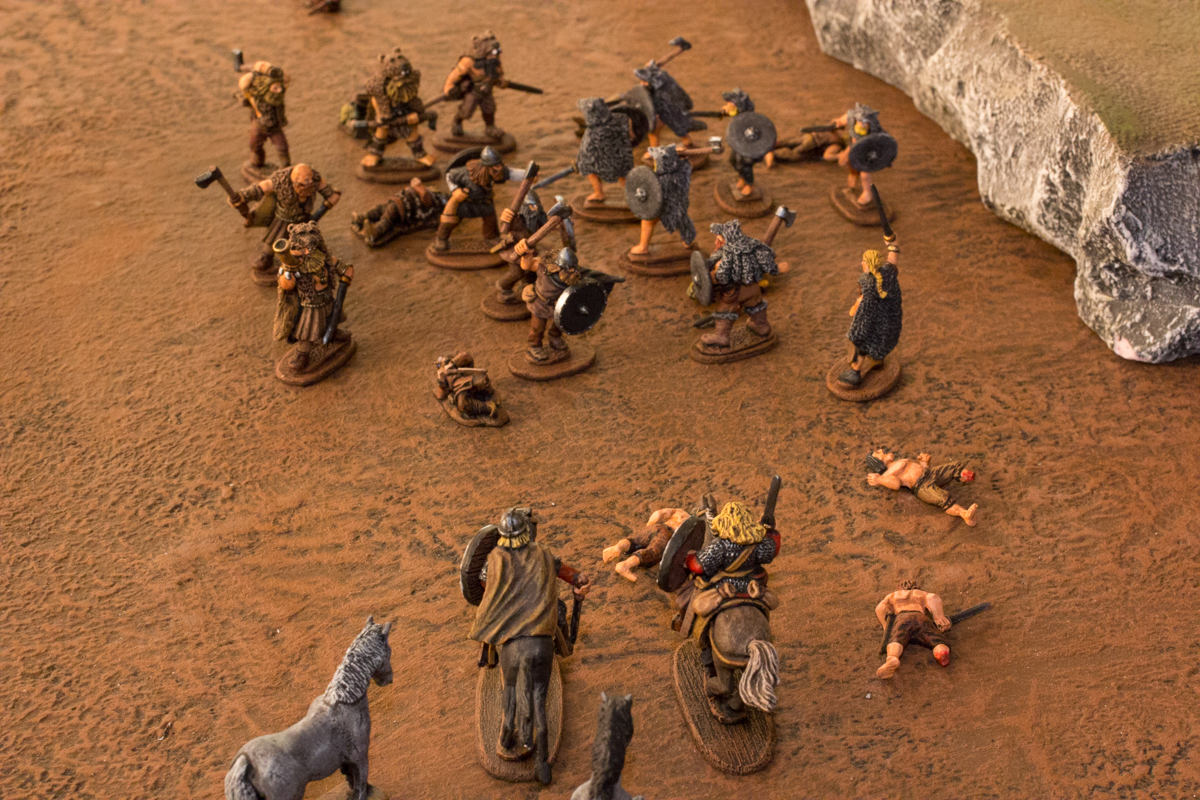 Melkor and Skefil slipped out of the cave and mounted their horses.

The riders charged at the berserks. 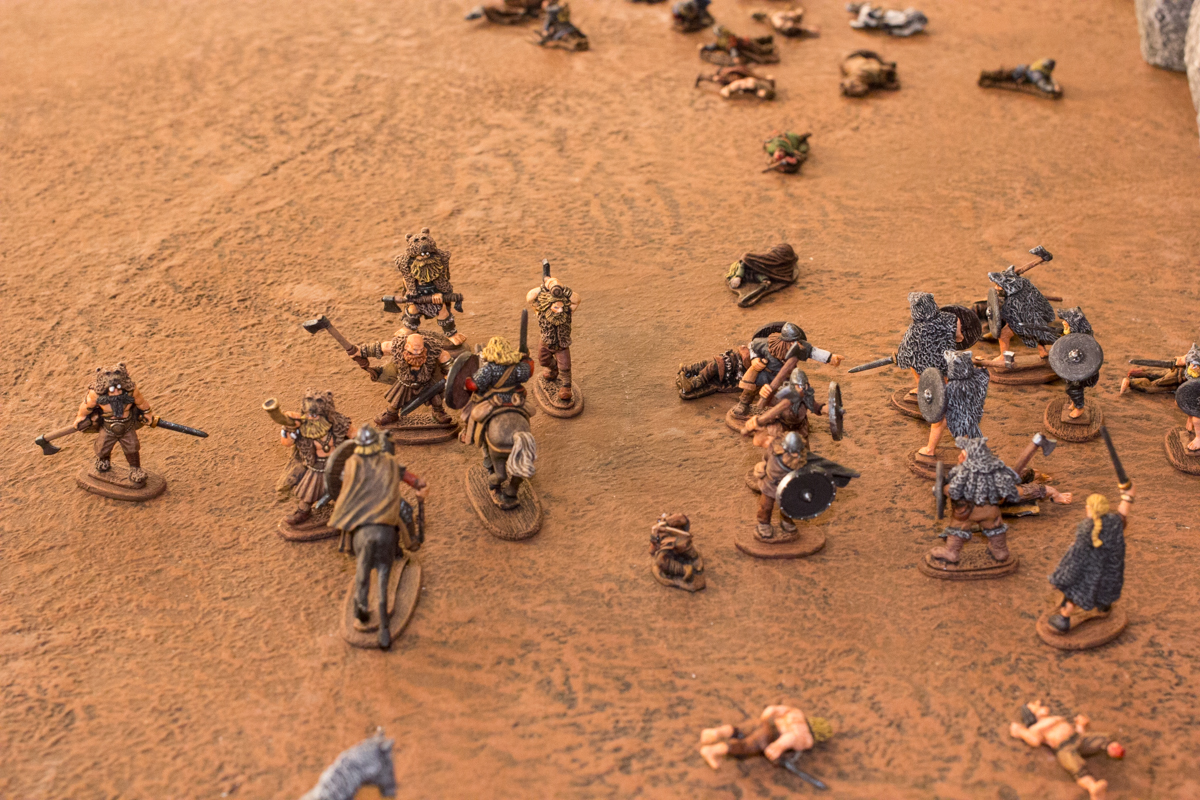 Aedelfrid crept behind the line of ulfhednar and swiftly eliminated two of the shaggy men.

Melkor thundered past the large bandit and cleaved through his head. As the big man fell, Melkor swung at the next man. 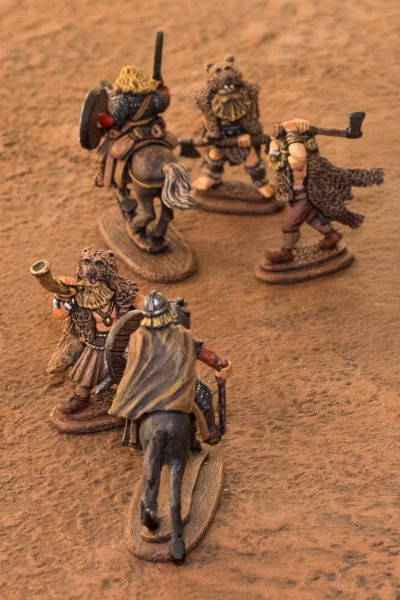 Melkor and Skefil slice through the remaining berserks.

Skefil slew the man with the warhorn, but fell to his injuries. 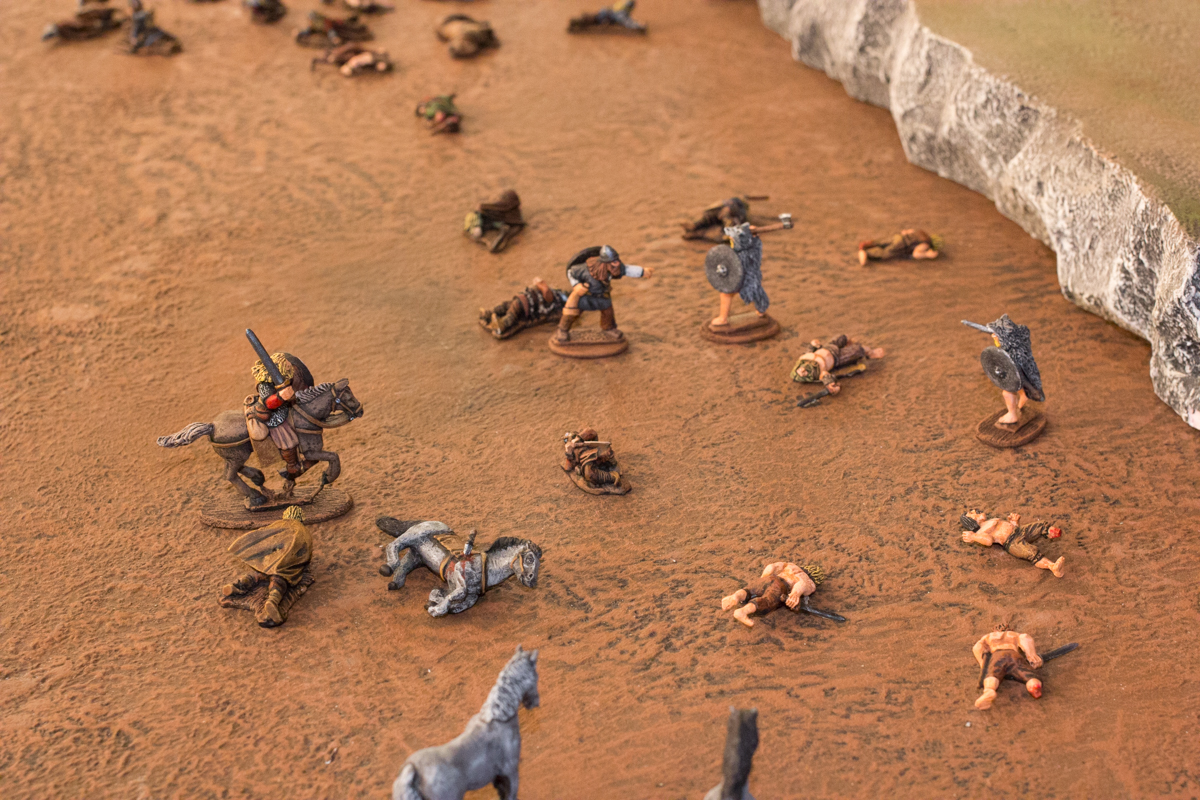 Melkor turned and looked to fight the last of the ulfhednar.

The ulfhednar chopped Melkor’s horse from under him. 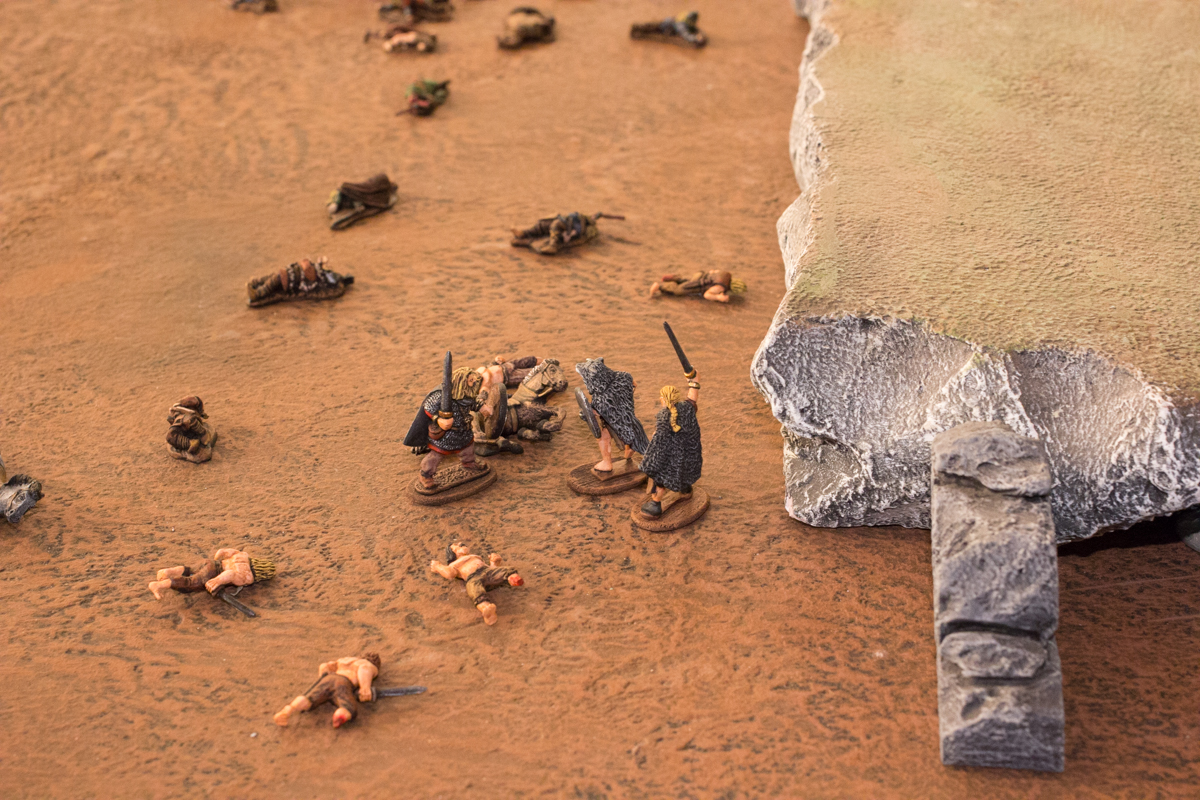 Aedelfrid stabbed at the ulfhednar from the flank. Melkor chopped at him from the front. The ulfhednar had no chance against Melkor’s swings and Aedelfrid’s precise strikes. He fell to the muddy ground.

The battlefield was bloody. Ottar was barely alive. Several of the bandits were dead, the rest were bound and taken prisoner.

The men of Rathus quickly searched the bandit lair and brought out their missing kin. The bandits had a huge cache of supplies, and livestock as well. It was decided to take the loot back to Rathus, there to heal and feast.