After the united human army destroyed the League of Nil-ith Horn orc force at Larbro, King Magnus took possession of that lakeside fortification. 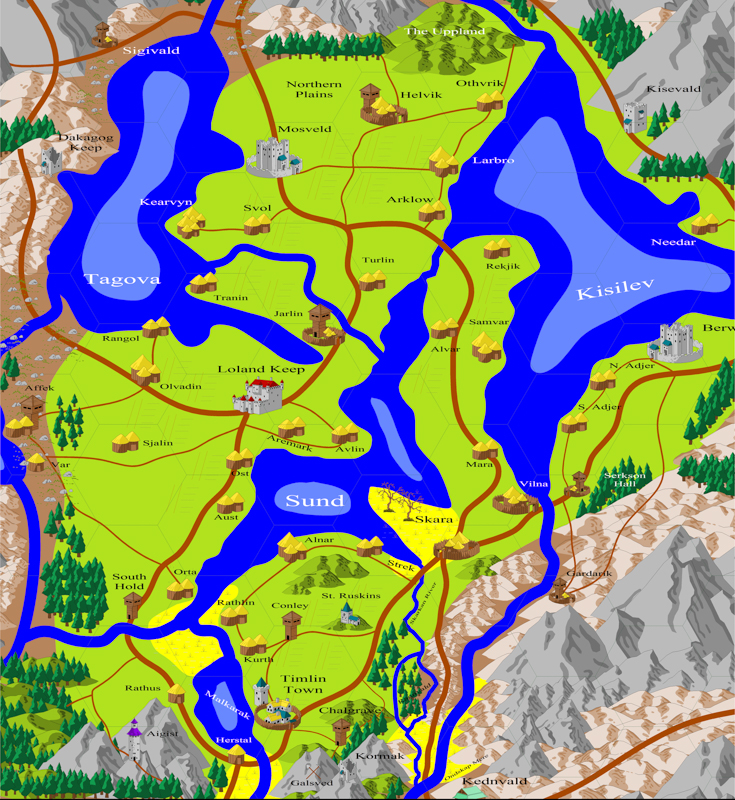 On the way there, Kvig stopped at his ancestral home of Helvik. 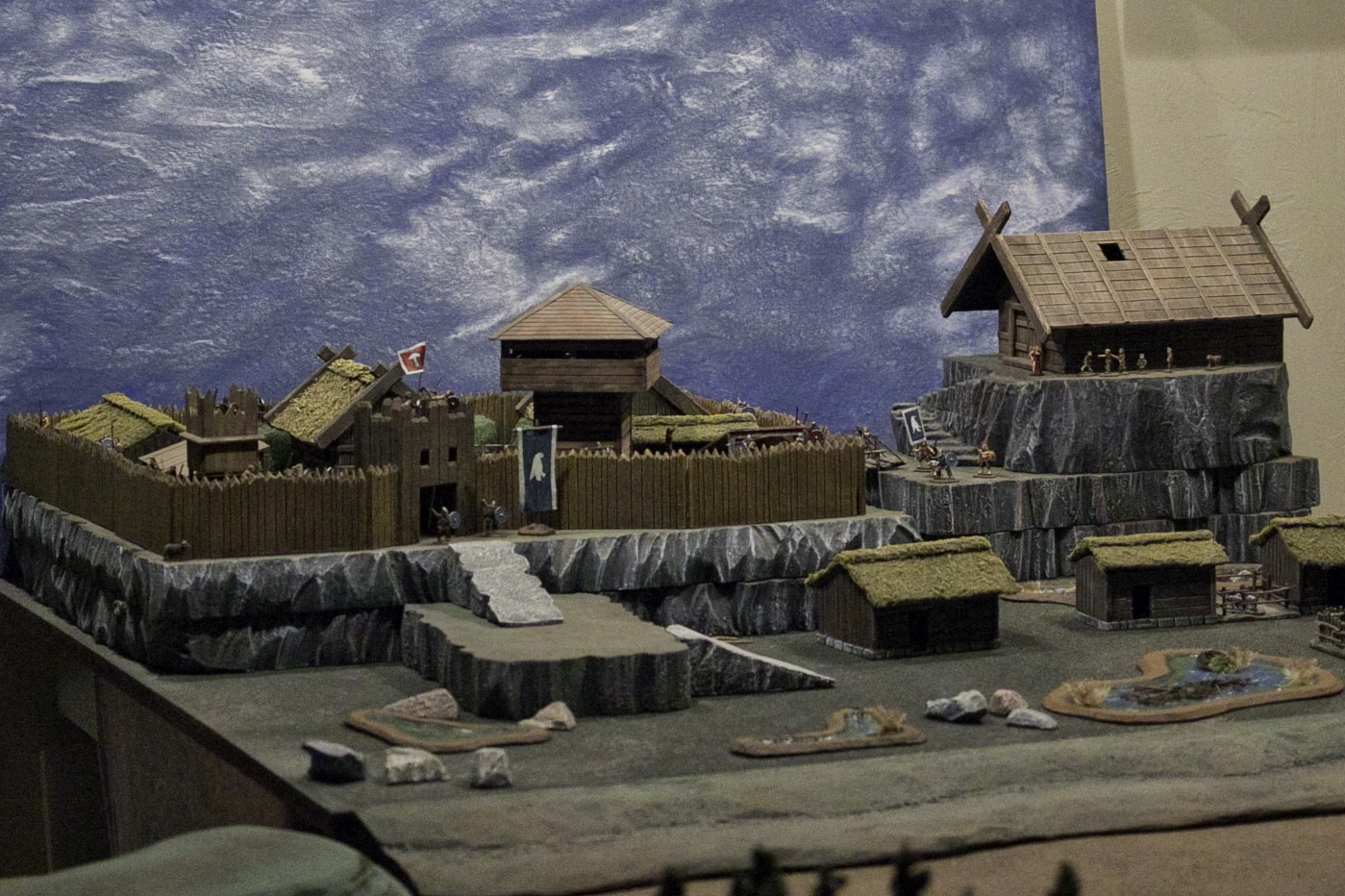 He gathered all the troops loyal to himself into his retinue, left a skeleton crew in control of the wooden fort, and announced they were going to a wedding.

Three days later, Kvig Melgarson and his army arrived at Mosveld to the sight of sparsely manned walls and wary citizens.

Kvig and his companions Bleddyn and Wynston were immediately ushered into the Queen’s keep by the lawgiver, Rig Steinarson. They were met by two huge scowling men, one a beardless young warrior in fine clothes and the other a bearskin clad berserker who towered over Kvig and Bleddyn. 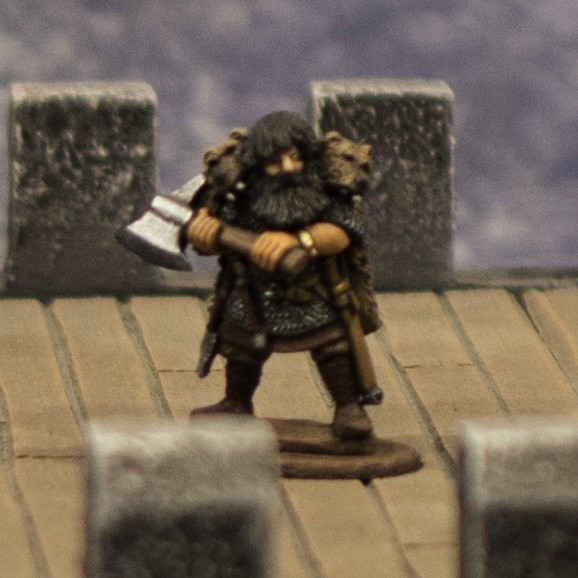 “This is to be our King?” spoke the barbarian angrily. “He is not half the man I am!”

“If our Queen wills it, we will abide her choice, Bjorn,” said the young man. He met Kvig’s gaze. “I am Thrand, son of Vester Vastarson who now holds Sigivald for Queen Svala. I have long heard the tales of your victories over the orcs, Kvig.”

With a dismissive grunt, the giant Bjorn shoved through Kvig and Thrand and left the castle.

“I hope you will bring your fight against the orcs to our holding,” Thrand pressed Kvig. “My father has been harassed by wild orcs from the western mountains. These orcs have taken up residence in the ancient stone fortress of Dakagog, and he has been unable to drive them out.”

“Plenty of time to discuss that at my wedding feast!” said Kvig. “Take us to the Queen!”

“The Queen waits within,” Steinarson the lawgiver said to Kvig. “She will have audience with you only.”

Wynston was nervous to leave Kvig alone with a woman of such power, and Queen Svala had a reputation for witchcraft. But it would be Kvig who took the wedding oaths with her, so into her chambers he went.

Bleddyn shrugged. “No point in staying here. We should see the troops.”

Wynston followed Bleddyn to the gate tower. From there she could make out less than a dozen of Queen Svala’s red-clad guards strung along the stone walls. 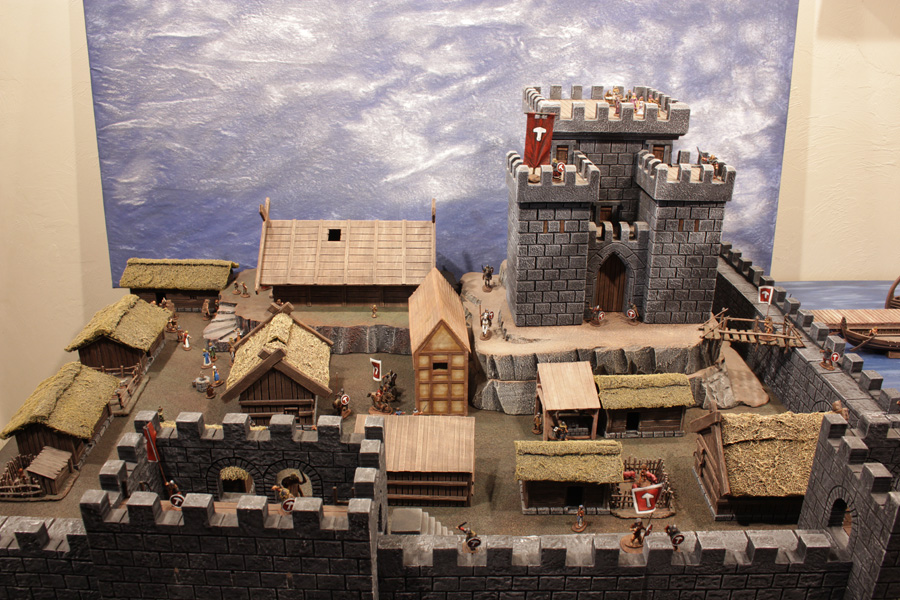 Wynston saw Mosveld’s heavy cavalry in the stables, and Bjorn the Mighty with his unit of warrior berserkers. 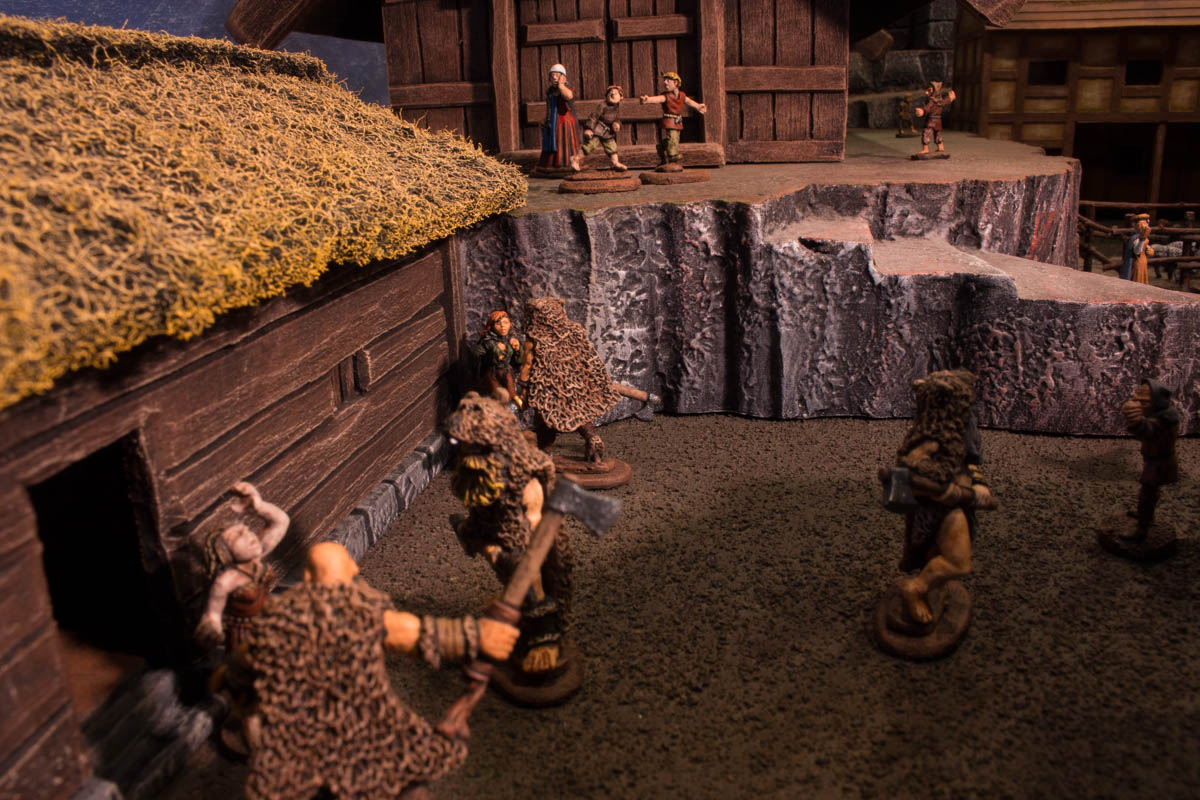 Kvig’s army would more than double the forces garrisoned now in Mosveld.

“They better have this wedding soon. We need to get our guards up here,” said Bleddyn.

Wynston nodded. “The lakeside gate is undermanned, too.” She looked to the castle. “King Magnus will know what we’re doing soon enough.”

“Let him come!” scoffed Bleddyn. “We’ll have the walls, and the numbers. He won’t be able to challenge us.”

When Wynston and Bleddyn returned to the castle, Steinarson informed them the wedding would be five nights hence. A bleary-eyed Kvig came out from the audience chamber and gave his approval. “Start the feasting tonight!” 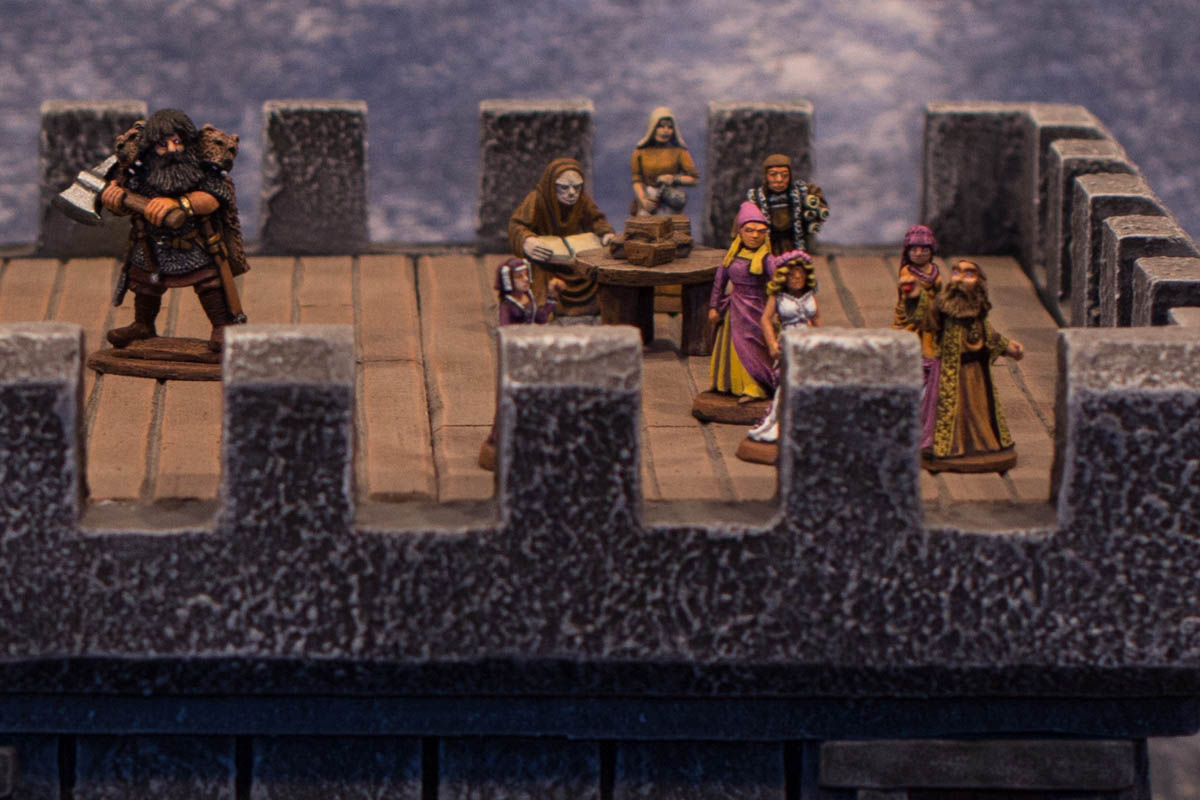 Rig Steinarson put the chamberlain in motion and had the tower set for a feast. The castle staff hurried to make the keep seem festive. More food and drink were brought in. Even Bjorn returned and joined glumly in the nightly meals Queen Svala hosted.

By the time the ceremonies were to begin on the fifth night, Kvig had eyes only for his Queen. In fact, Wynston and Bleddyn were concerned at the doting stares Kvig fixed on his wife-to-be. He seemed a bit smitten for a warlord whose eastern borders were occupied by a rival king.

However distracted, Kvig spoke his oaths true, and Queen Svala said the same, and the Lawgiver announced them man and wife. Wynston and Bleddyn were overjoyed. 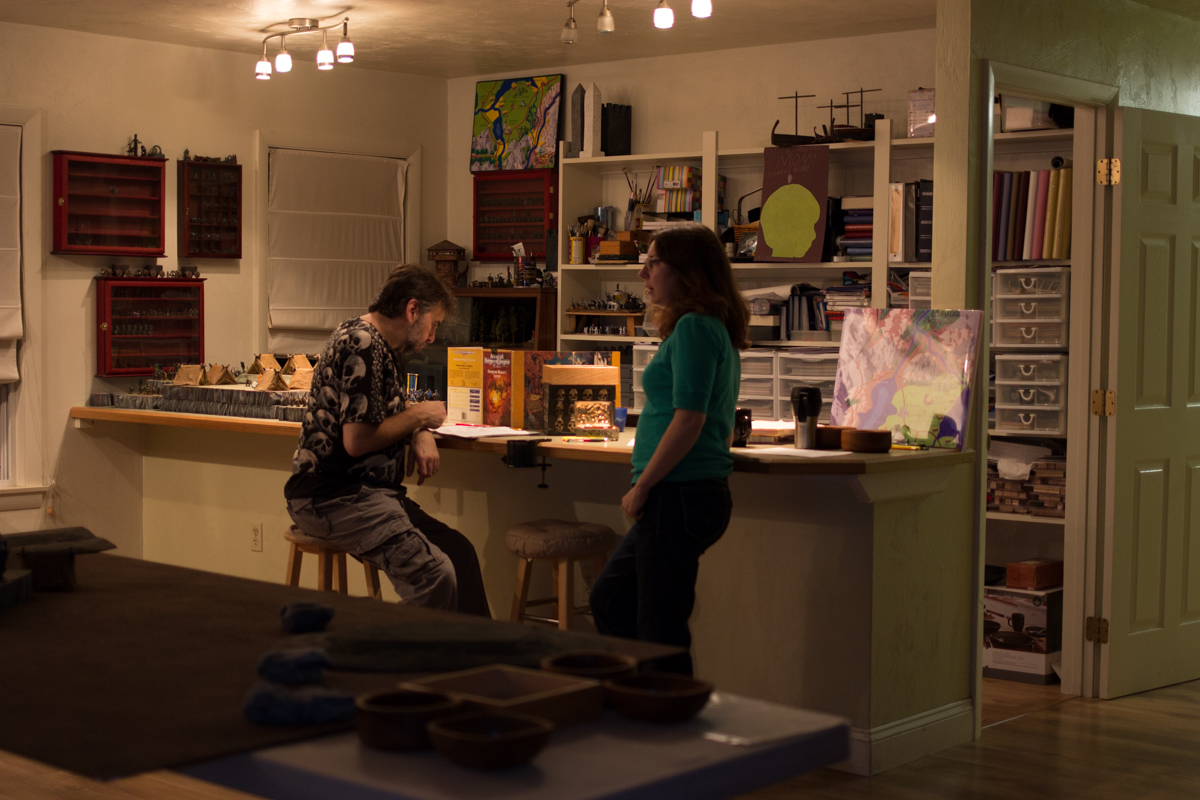 They feasted long into the night. Impatiently, Wynston and Bleddyn got the couple off to the marriage bed, and began to bring Kvig’s men into the city in support of the Mosveld troops.

Their timing was fortuitous, as the next day before King Kvig was out of the marriage bed, riders brought news that King Magnus had taken control of Helvik, and would be at Mosveld within three days.

Kvig ordered his entire camp, followers and all, into the city. King Kvig Melgarson’s loyal soldiers took to the walls and streets. 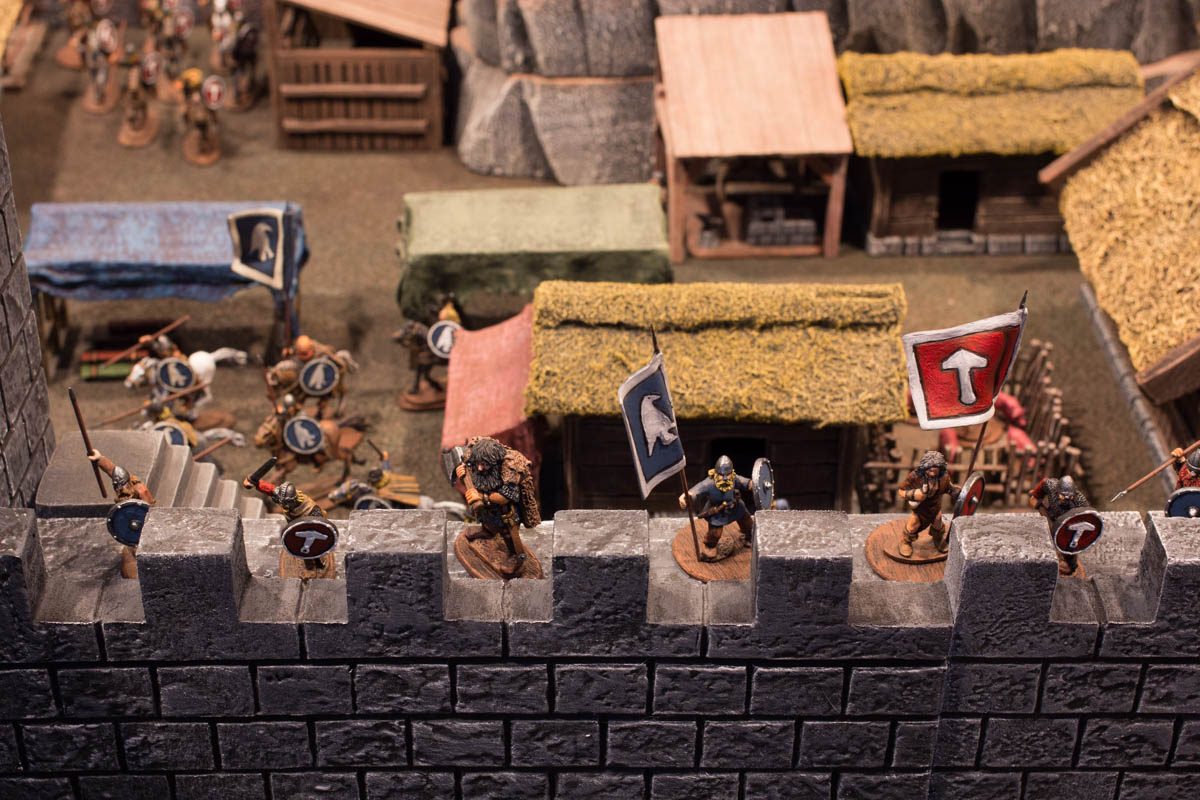 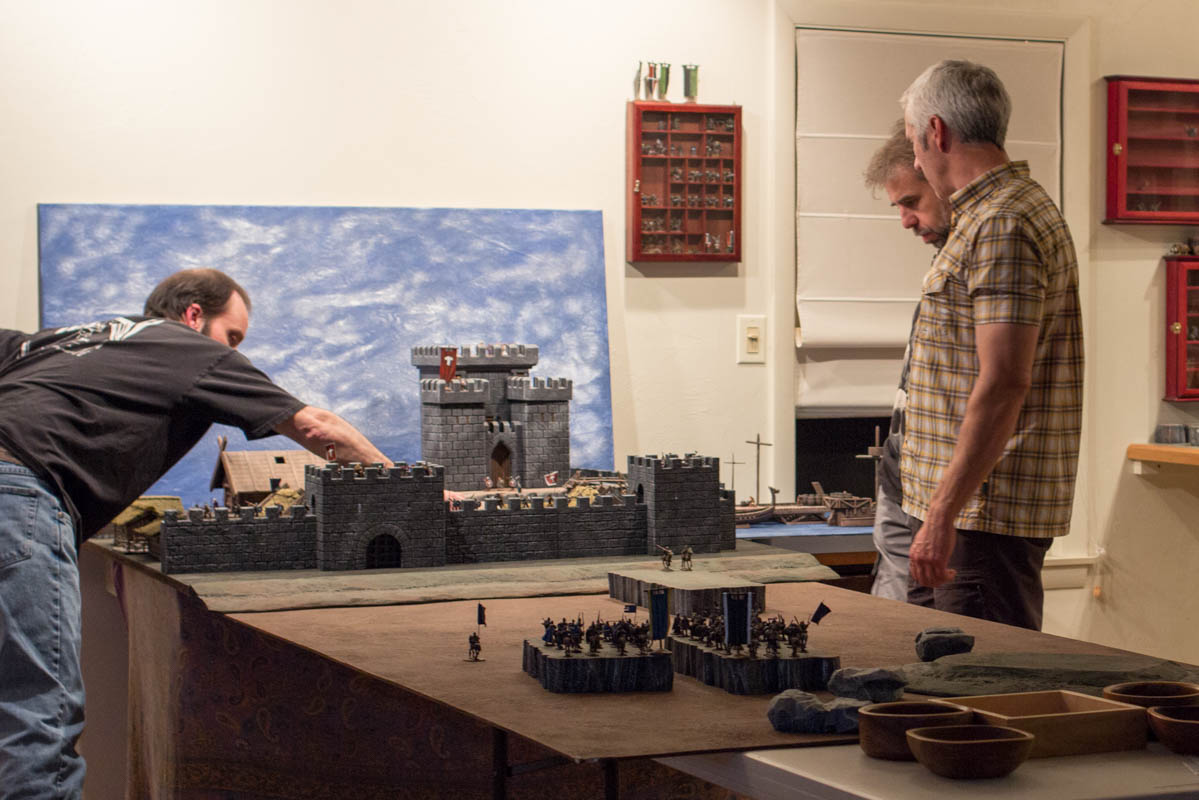 King Magnus had an impressive army, but surely not grand enough to siege Mosveld? Bleddyn was highly suspicious. 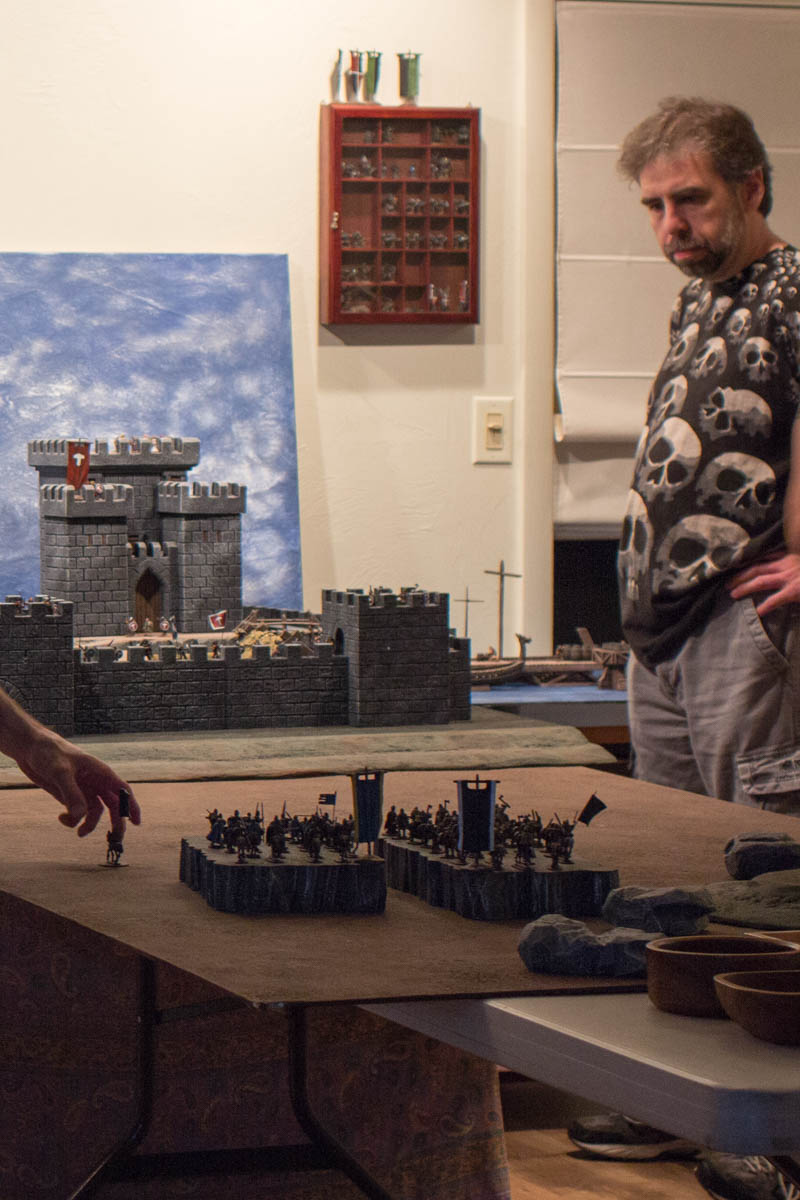 King Magnus arrayed his professional army for battle. Units of blue-and-yellow Kildarian elite heavy cavalry, including those led by Kvig’s ally Baron Vulmar, bolstered the Gautrian heavy fighting forces. Also under Magnus’ banner was Kvig’s cousin Bolverk Skalason, and the elite warriors which had earned him much fame at the Battle of Skarken River.

Kvig and Bleddyn responded. Bleddyn deployed his ulfhednar in the courtyard. Kvig readied the heavy cavalry.

Then from the gatehouse, Bjorn the Mighty bellowed:

“Now men! Death to the witch-queen of Mosveld!” And the bear-skin warriors threw open the gate.

The Kildarian cavalry thundered through the tunnel.

A stunned Kvig was mounted there to meet them. 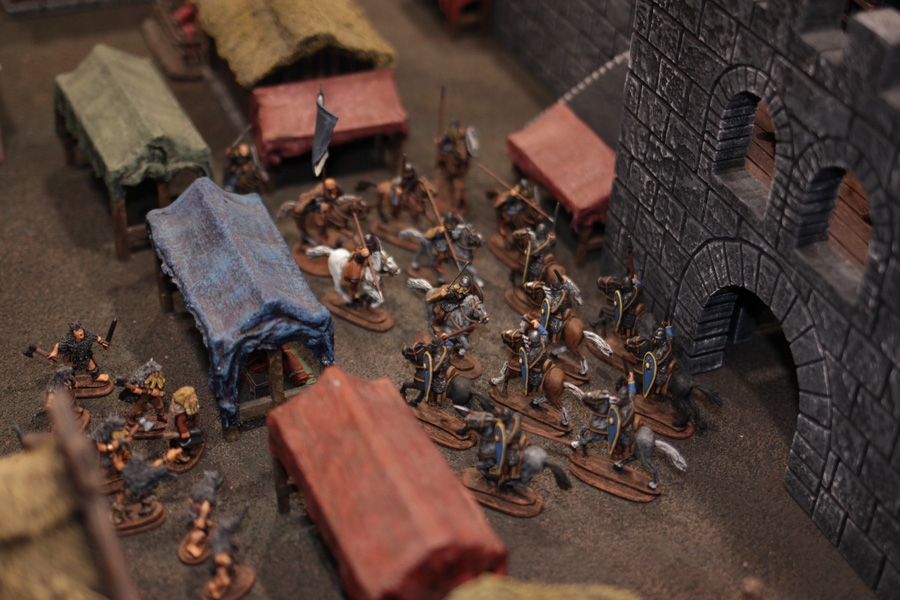 Bleddyn dropped inside and challenged Bjorn. Wynston ran for the winch but was attacked by two of Bjorn’s men guarding the lever. Thrand Vesterson jumped from the battlement and engaged the traitorous berserkers to get Wynston clear. There was mayhem within the walls. 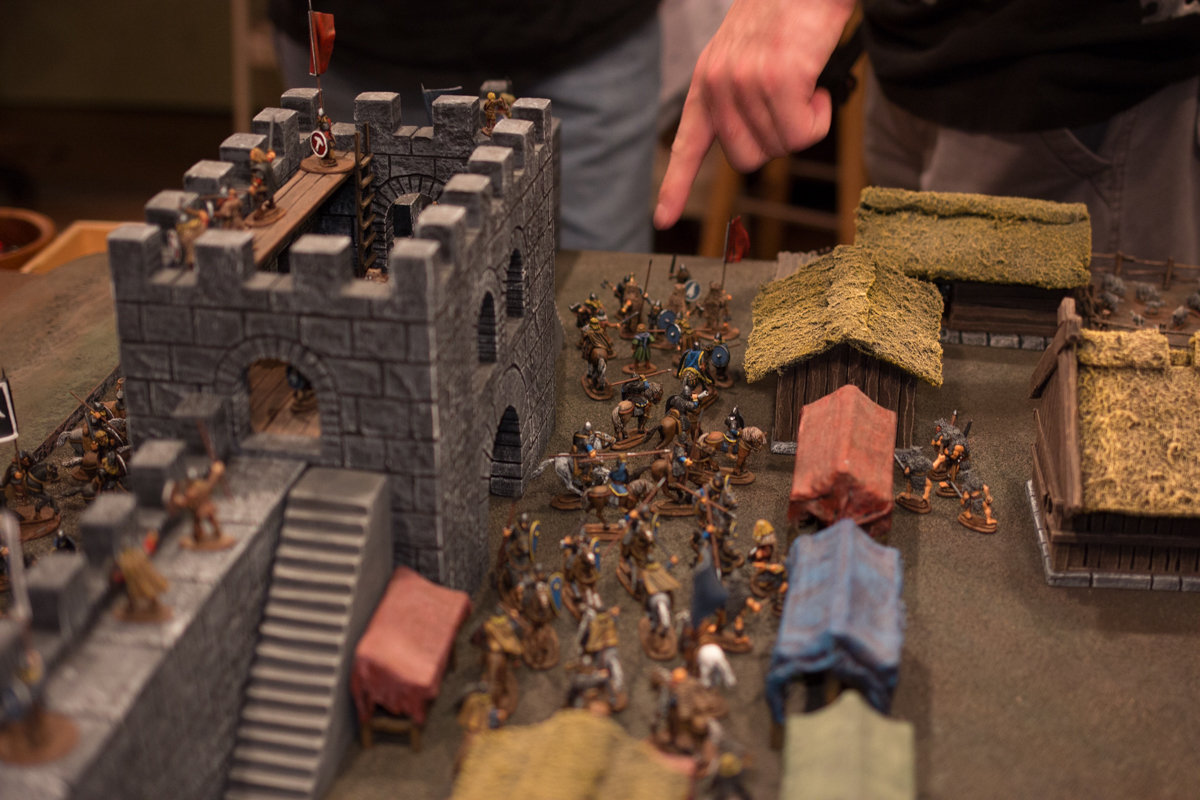 A huge explosion rocked the walls of Mosveld. The lakeside gate was breached! Bolverk Skalason led his crushing infantry through the hole. 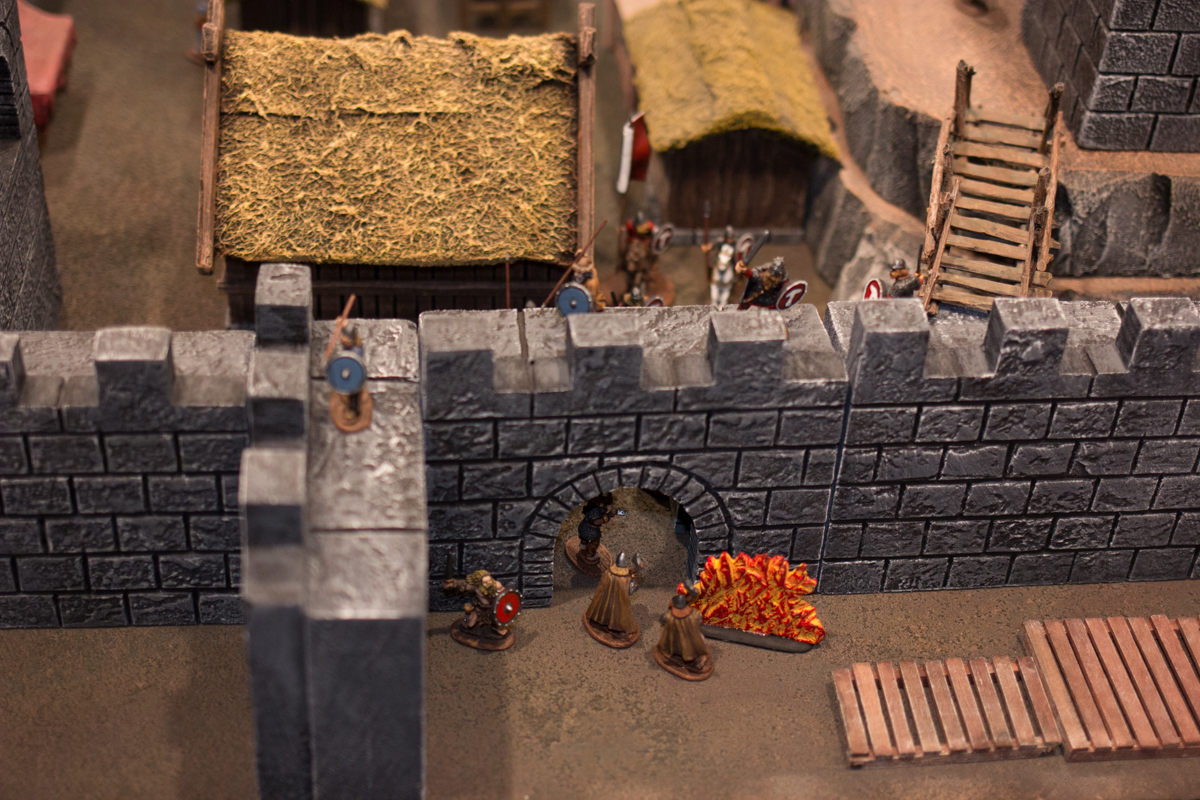 Mosveld’s cavalry broke off to meet the axe-wielding warriors.

Bleddyn and Bjorn battled fiercely in the gatehouse. They exchanged several blows until the mighty Bjorn lay mortally wounded on the wooden floor.

Wynston secured the winch and slammed close the gate, trapping the dwindling numbers of Kildarian horseman inside the walls. Bolverk’s heavy infantry unit was in the courtyard confronted with Mosveld’s cavalry in front, and javelins from men on the ramparts above.

The cavalry of King Magnus, led by his warrior wife Inga Storolfdottir, reigned in and wheeled back to the King’s lines. 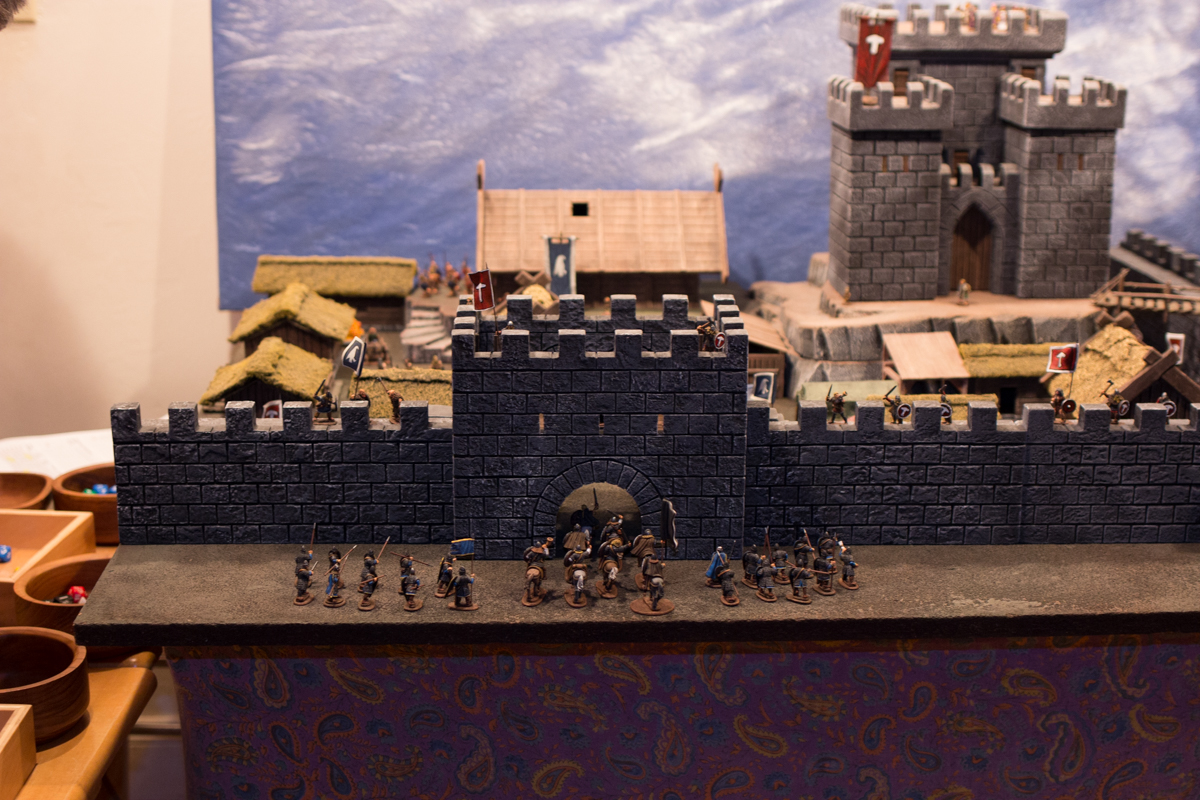 The Kildarian foot soldiers fell in behind the cavalry and left the gates unchallenged.

King Kvig stood tall in his saddle and called to the commanders Vulmar and Bolverk.

“Your King Magnus has abandoned you! Vulmar, you pledged to be my vassal when I held sway in the south. And cousin, you have never done wrong by me. Both of you, take oaths to me, be my steadfast swordarms, and you will be well rewarded.”

The warriors surrounding Kvig picked up the chant. “King Kvig!” was shouted from rampart and horseback.

It was a might victory roar that poured from the city and echoed in King Magnus’ helm as he retreated from the field of battle.

King Kvig had won and defended his stone city. How would King Magnus react to his defeat at Mosveld? And what of the new orc threat to Gautria’s western borders? Can King Kvig build his forces and kingdom to stand the tests of time?