Kvig Melgarson, his champion Bleddyn Yorath, and his master spy Wynston Black marched with Kvig’s few infantry units to his ancestral home of Helvik. When Kvig arrived at that wooden keep, he found his brother Olaf, the jarl of Helvik, had the gates open in welcome. Kvig brought his troops inside the wooden palisade walls. 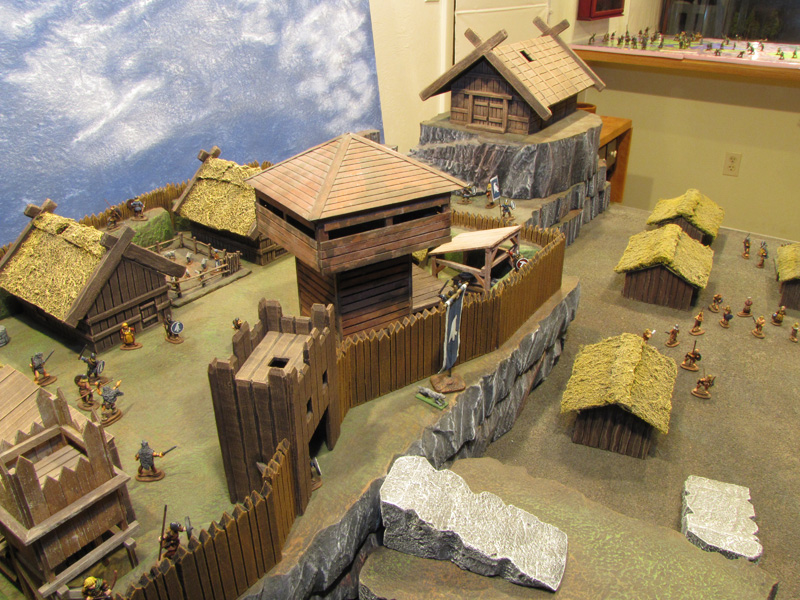 Kvig could see the fortification was woefully undermanned. The fighting men from Helvik looked hopefully to Kvig. They had marshalled in the fort against the League of Nil-ith Horn orc invasion, but Jarl Olaf was too ill to ride out and fight. Kvig promised them he would drive the hated orcs from the shores of North Gautria, just as he had done in the lands to the south. Many men of Helvik cheered and Kvig’s retinue began to chant “King Kvig! King Kvig! King Kvig!”

“Where is my brother, your Jarl? I should pay my regards to him and his wife,” Kvig asked. He was directed to the great hall on the hill, where the men told him Olaf sat and drank each day as his wife Ragna ran the holdings. There were dark looks exchanged when Ragna’s name was spoken.

Kvig strode through the warriors to the hill. Wynston and Bleddyn followed behind Kvig as he entered his brother’s hall. Olaf Melgarson sat slumped in a large wooden chair, drink in hand. His beautiful wife Ragna sat in a matched chair by his side. Casks and barrels lined the side of the hall between Kvig and Olaf.

“So, brother,” said Kvig, “This is how you keep our father’s lands safe? Our people are slaughtered by orcs while you drink in the mead hall? Take your sword and ride out with me!”

“You would like that, Kvig Melgarson, I am sure,” said Ragna. “To see your brother slain on the battlefield so you can lay claim to Helvik.”

“Enough!” roared Olaf as he rose unsteadily from his chair. “I’m not dead yet, woman! I rule Helvik, and I fear neither this bandit-king brother of mine, nor the orcs from the League of Nil-ith Horn.” Olaf drained his cup.

“Then lend your sword arm and your men to our cause and together we will defeat the orcs!” replied Kvig.

“Bah! Do all your men even own shields?” asked Olaf. “You ran from our brother Hegg in Timlin and his liege King Magnus, and come here to Helvik with thirty men boasting to slay the orcs? I will wait for Magnus, I think.”

Kvig turned a hard stare on his brother. “Is that you speaking, Olaf? Or is it the words of your witch-wife speaking to you through your drink?”

Olaf threw his empty cup at Kvig and drew his sword. Ragna jumped to her feet between the brothers.

“Bleddyn,” Kvig said behind him. “The casks.” 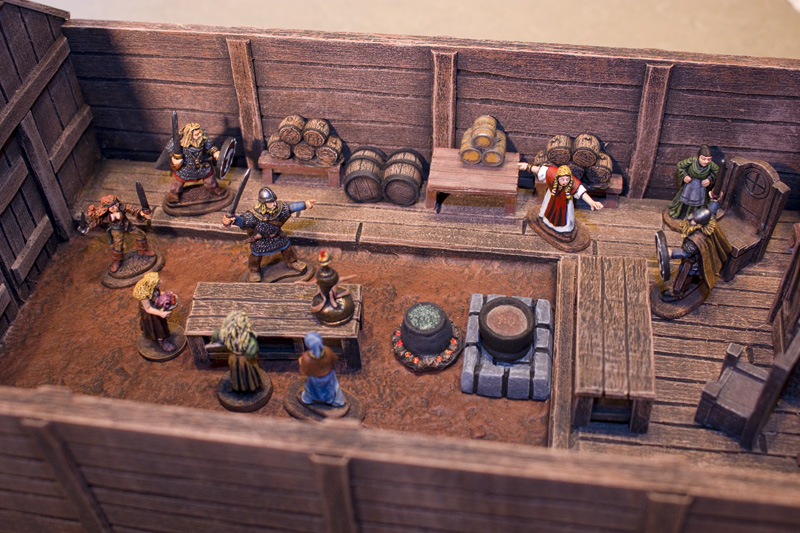 With just a slight hesitation, Bleddyn hacked into a barrel. The floor grew dark as Bleddyn slashed cask after cask.

Olaf only shuddered and let his sword drop. Ragna shrieked and ran from the hall.

“Now you can be free, brother, as we will make the North free!” proclaimed Kvig.

“You will see what you have done, brother,” said Olaf hopelessly.

Kvig, Bleddyn and Wynston returned to their men in the yard. Once it was dark, Wynston convinced the two to sneak to the sacred grove where Ragna was surely calling on the old powers. Kvig and Bleddyn hid farther off, but Wynston was able to get close enough to prove her hunch. Ragna was communing with her sister Svala, the Queen of North Gautria since her husband Gorm was killed at the Battle of Turlin. 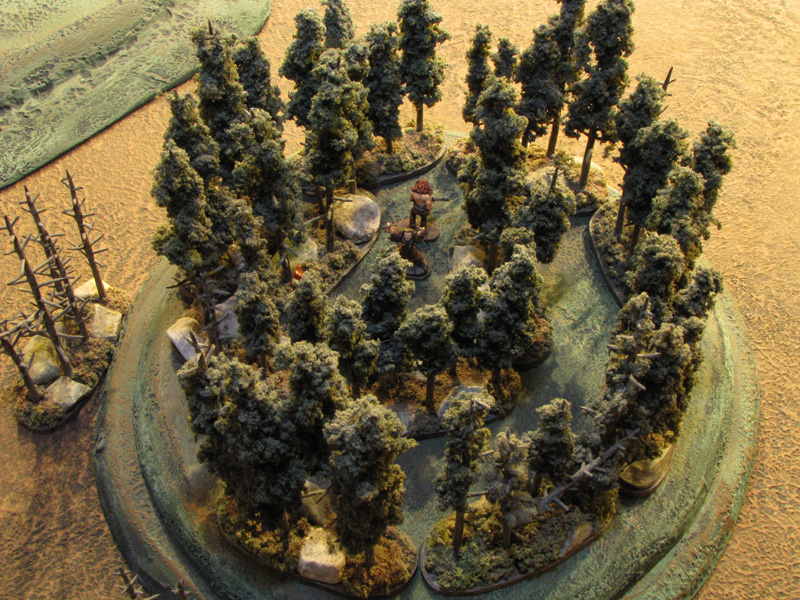 Svala promised men to aid Ragna in holding Helvik. Hidden among them would be professional assassins to target Kvig. Wynston moved closer to hear the details and was spotted by Ragna’s fanatic followers. Wynston slew one, and led the other to her hidden comrades. By the time she, Kvig and Bleddyn had dealt with the fanatics, Ragna had disappeared.

The trio ran back to the tower of Helvik, where they were stopped by more of Ragna’s men. 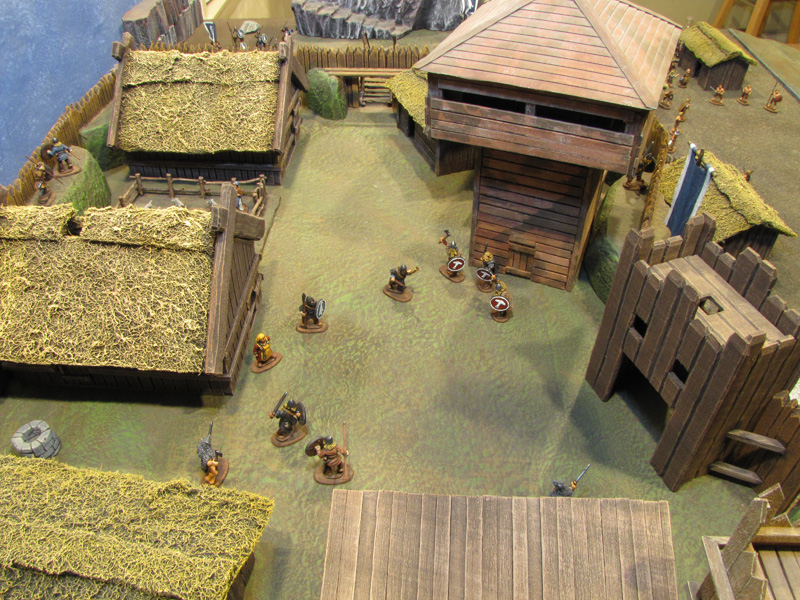 Kvig demanded they step aside. Kvig’s forces were rousing in answer to the combat outside, and the sudden commotion in the gates. Ragna’s three thanes in red threw down their swords and declared for Kvig.

Wynston was about to enter the tower when most of the few remaining women in Helvik appeared in the yard. They begged for Kvig to hurry to his brother. Kvig ran to the great hall.

Olaf lay at the foot of his chair. His skin was grey, and his breath shaky.

“See, little brother? See what you have brought on me?” asked Olaf. “You may know war, but you do not know women.” Olaf lifted his shirt. A black stain marred his chest. “This should have killed me long ago. It was Ragna kept me alive. You bring death with you, Kvig.”

Kvig grasped his brother to him as Olaf breathed his last.

Wynston turned from the Melgarsons and sprinted back to the tower. It was empty, and no one had seen Ragna.

Kvig Melgarson burned Olaf’s body with honors. Kvig stood tall in the light of the funeral pyre and declared himself Jarl of Helvik. The inhabitants of Helvik cheered their approval. Kvig’s men from the south began a different chant: