King Kvig won a sound victory over King Magnus as Kvig defended Mosveld against Magnus’ treacherous attacks. Two of Magnus’ units abandoned him during the battle and declared loyalty to King Kvig. Kvig demanded oaths from the men and their leaders: Kvig’s cousin the mighty soldier Bolverk Skallason, and Baron Vulmar Voclain, the Kildarian knight, pledged themselves and their elite units to King Kvig. King Kvig also showed mercy to Bjorn and his berserk warriors when he allowed Bleddyn to heal and release Bjorn from the city.

Kvig gathered his forces the next day and set on a march to chase Magnus from North Gautria. King Kvig pursued Magnus to the river dividing North from South. 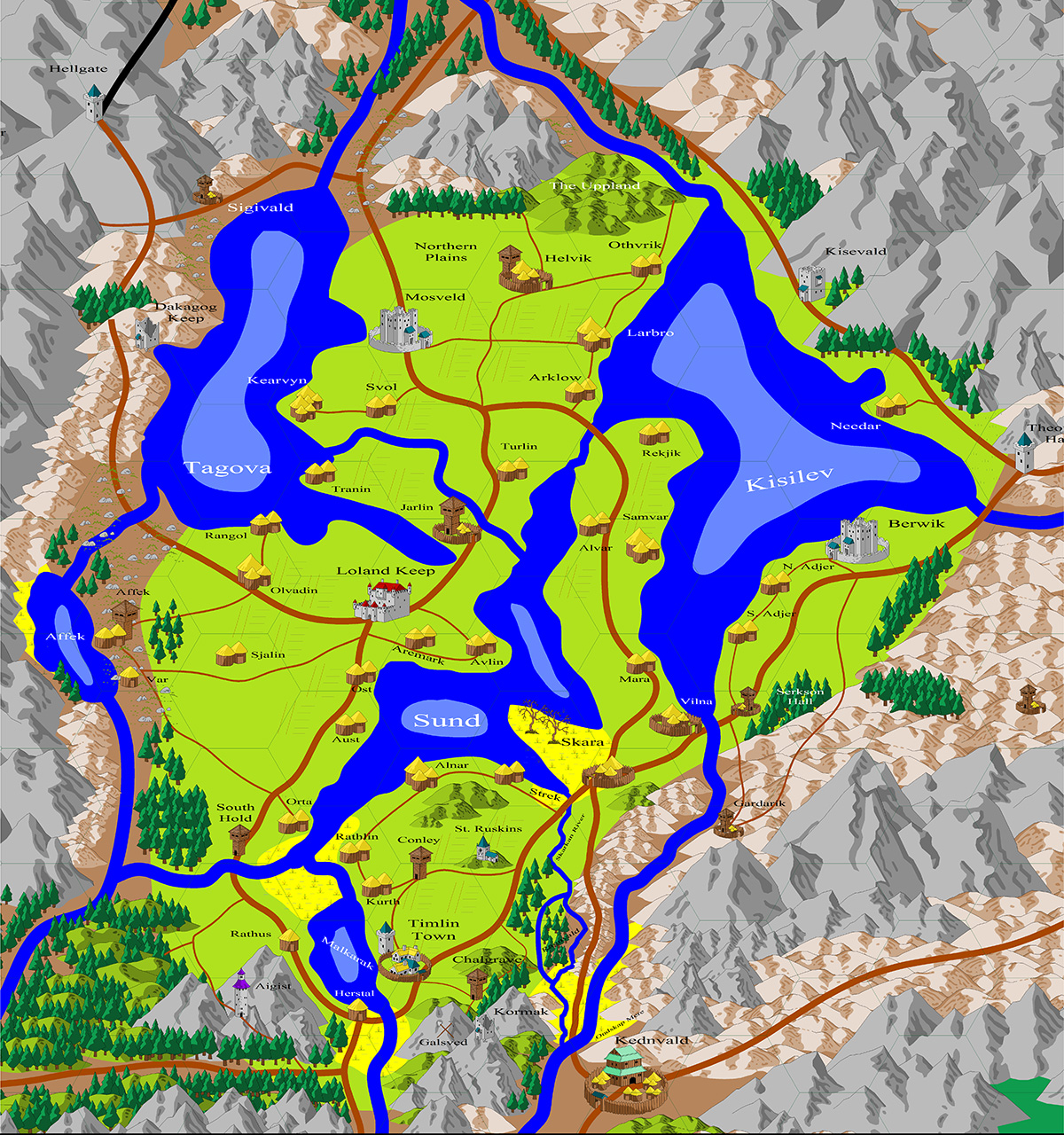 There the two kings were met by the third most powerful man in Gautria, Kvig’s uncle Skalla Grimson. Jarl Grimson had crossed the river from his home of Jarlin with troops to rival either of the kings’ forces. 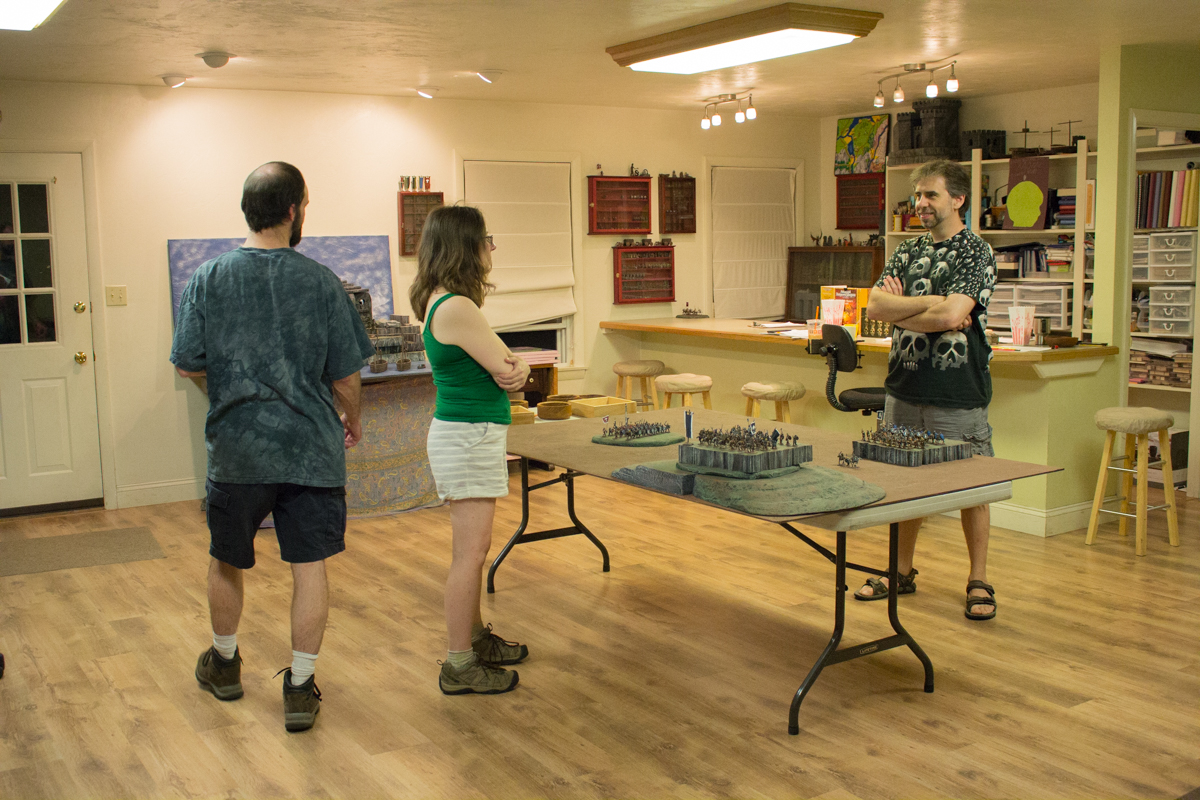 Skalla wanted the warring kings to understand their fight would cripple Gautria and leave her open to orc invasion. At last, Kvig and Magnus made peace and agreed to each keep to his own side of the river. Kvig went North, while Skalla Grimson escorted Magnus south.

Kvig and his army returned to his capital city of Mosveld. The tall, handsome Thrand Vesterson was waiting for Kvig in the Queen’s keep there.

“My father is in desperate need against the orcs,” Thrand said to Kvig. “The foul creatures have inhabited the old stone fortress of Dakagog and from that place of strength they threaten Sigivald and all your lands west over Lake Tagova. Sail with me, King Kvig, Orc-Slayer, and I will land your boats at Dakagog and join your men in the slaughter of those wretched orcs!”

“Agreed, young Thrand,” replied Kvig heartily. “We will take you from here and do what your father can not!”

King Kvig assembled a small force made up of his own veteran shield bearers, a unit of unarmored but highly mobile picked men commanded by Wynston, and a unit of ulfhednar loyal to Bleddyn. Kvig also chose the newly-sworn unit of elite Kildarian knights to accompany them.

Thrand Vesterson confidently steered the boats across Lake Tagova, and brought them without event to the shores of the orc fortress of Dakagog.

Thrand put in at the landing. Kvig led the charge up the hill, with Thrand and Baron Vulmar at his side. 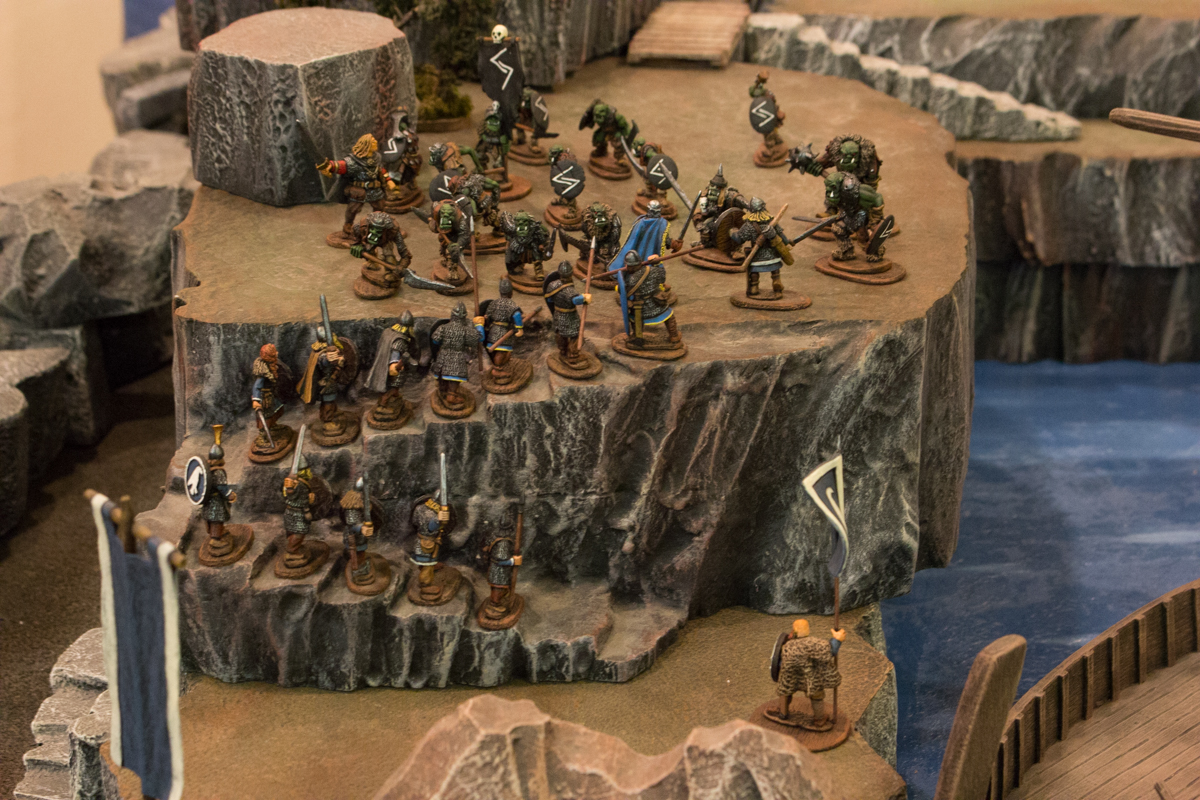 Bleddyn and Wynston brought their men scrambling up the rocks on the flank.

The wild orcs put up a vicious defense. Wynston’s picked men were whittled down as they tried to climb the hill. Bleddyn and his ulfhednar slowly pushed the orcs back. 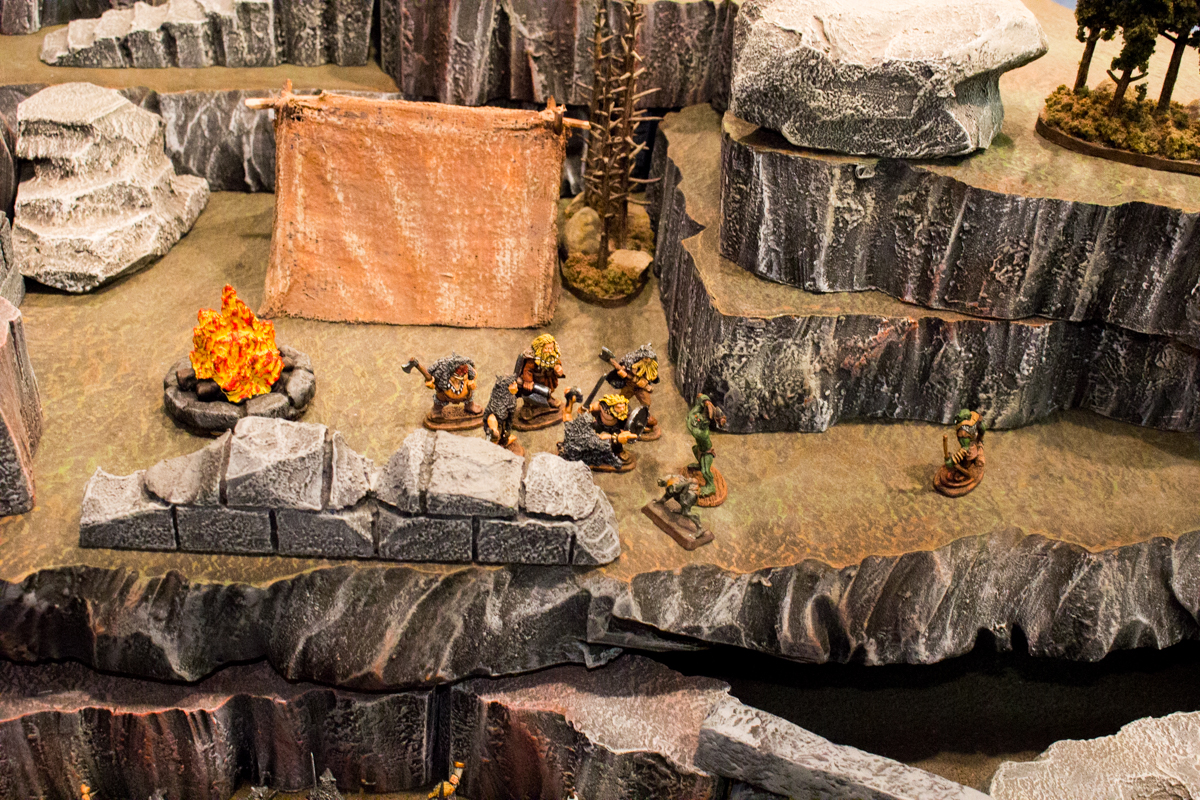 The orcs held strong at the top of the stone staircase against Kvig’s well-armored forces. The narrow steps left no room for Kvig to bring his numbers to bear. 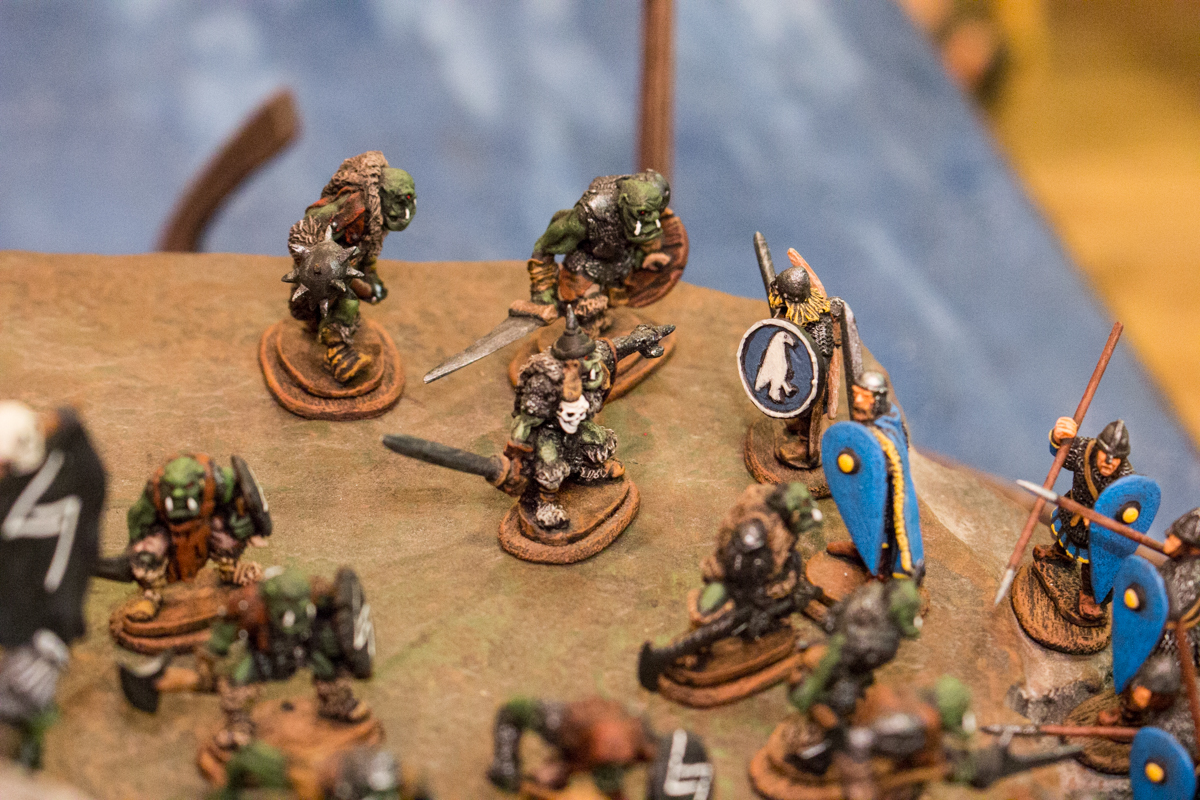 Kvig and his heroes hewed down orc after orc, slowly opening the space to gain a foothold on the crest of the hill.

Bleddyn’s unit broke the orcs on the flank and manuevered behind the orcs pinning Kvig and the heavy infantry on the hillltop.

Halvdan the hero smashed throught the line to attack one of the two urogs threatening Kvig. Wynston left her dwindling unit and ran across the cliffs to join the melee. She picked out the other urog attacking Kvig and hacked into its back. The three heroes quickly finished the two urogs. 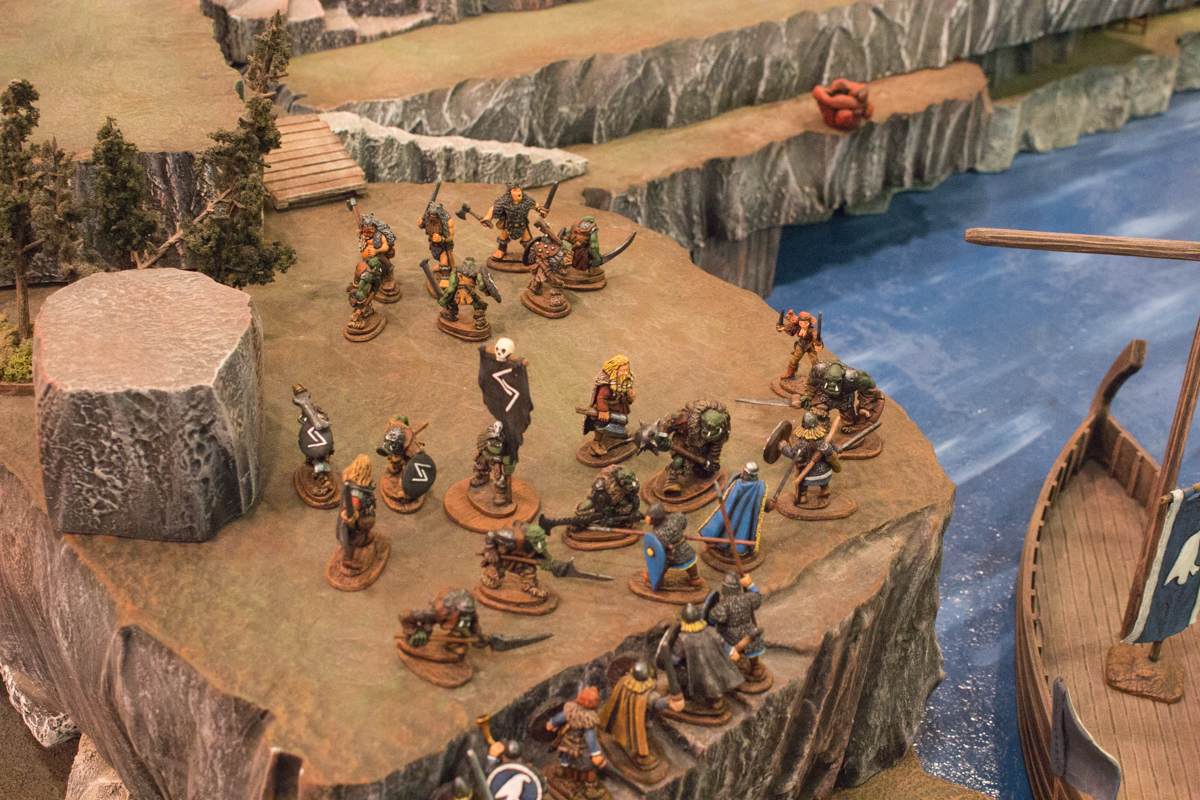 Bleddyn and the ulfhednar engaged the remaining orcs. 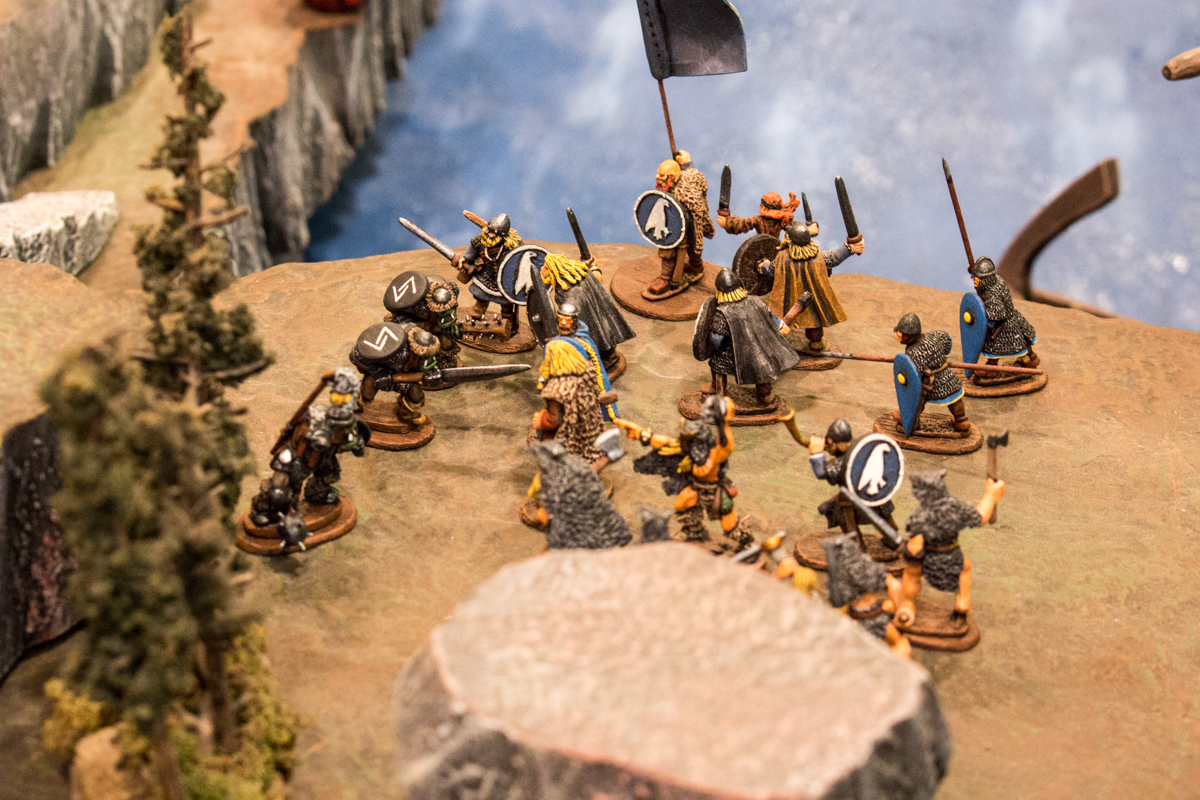 Outnumbered, the orcs were soon slaughtered by the human invaders.

King Kvig called to the orcs that had barricaded themselves in the fortress to offer terms, but there was only silence from the stones. The humans set to opening the gates with force. Even unopposed, it was several hours before the humans cracked the fortress and Kvig stood inside the empty hall of Dakagog.

King Kvig had removed a good-size orc force from his western lands, but Thrand Vesterson said many large groups of wild orcs still populated these hills. Can Kvig and his forces reclaim the lands from the orcs? And how would Kvig deal with his vassal, Vester Vaster, and his inability to defend the King’s holdings?