Boyar Thonkrik was pleased, and a bit surprised, at Eskander’s successes.

“Well done!” Thonkrik congratulated Eskander. “You’re the one I need to take our considerations to Hertog Torkag at his fortress of Dalthu.  We’ve got two towers on the road to Kisevald that need to be rebuilt and manned against Bothvar Helgeson and his miserable Upplanders. I need you to convince Torkag to send three units for our final push to rid our side of the river of these savages.

“I’ll have a wagon loaded with gifts of great expense: silver, weapons, wine! Let him know his urog Vaak can run the silver mines for us. Just bring back fighting bodies.

I can only trust a man of your background with this, Eskander. So, no other officers can go, instead take that orc Gazzi you like so much. His valgrafs and Vaak’s orcs will see you through to Dalthu.

And Eskander- leave your horse here.”

The next morning, crates, casks and goods were piled on the wagon for the northern journey to Dalthu. Eskander saw jugs of Grunevaldian wine among the offerings. Boyar Thonkrik was lavishing gifts on this Hertog Torkag.

As promised for Vaak Akarya’s service in slaying the renegade urog at Rostok Mines, a two-handed steel sword was waiting in the armory for her. Eskander gave her the sword, and the news that she would be the urog to hold the silver mines.

Gazzi and his valdgrafs took postition about the yak-drawn cart and the party left. The weather was bad and the roads were worse. The scouts could find no easy way through the swampy trail. 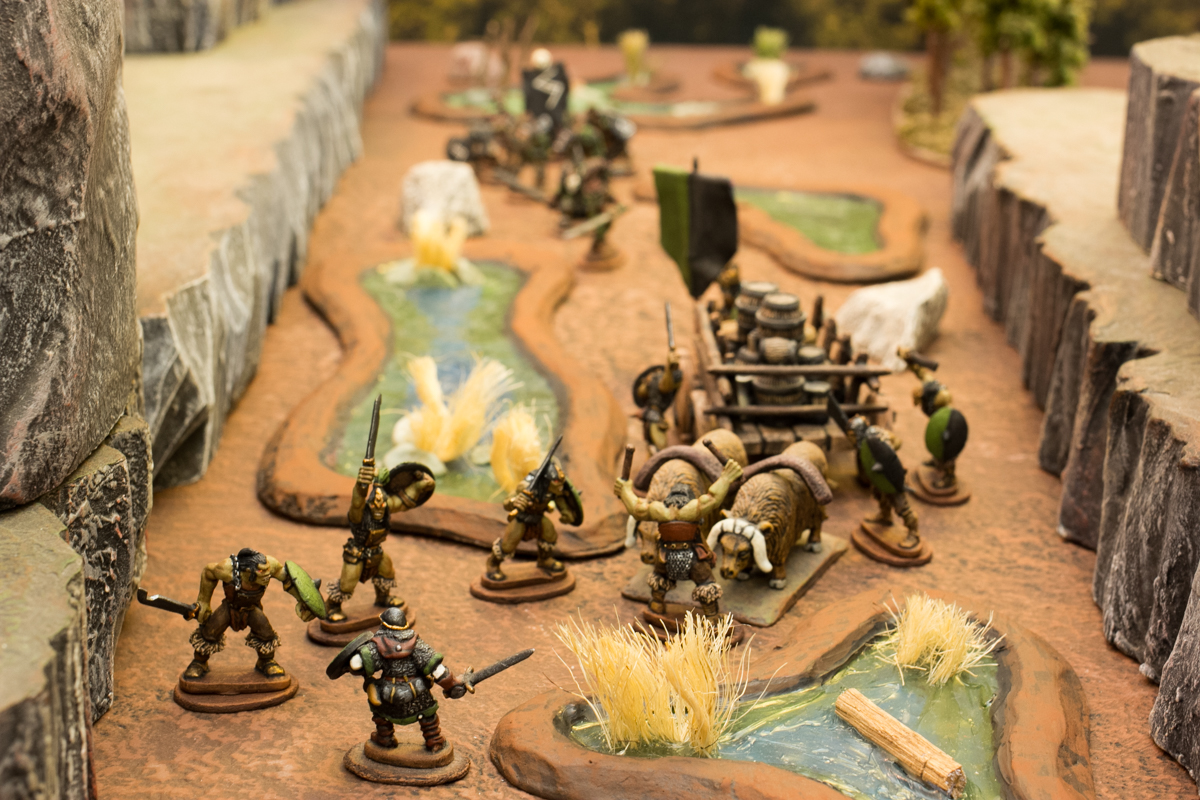 The supply-laden wagon made slow progress on the swampy road. 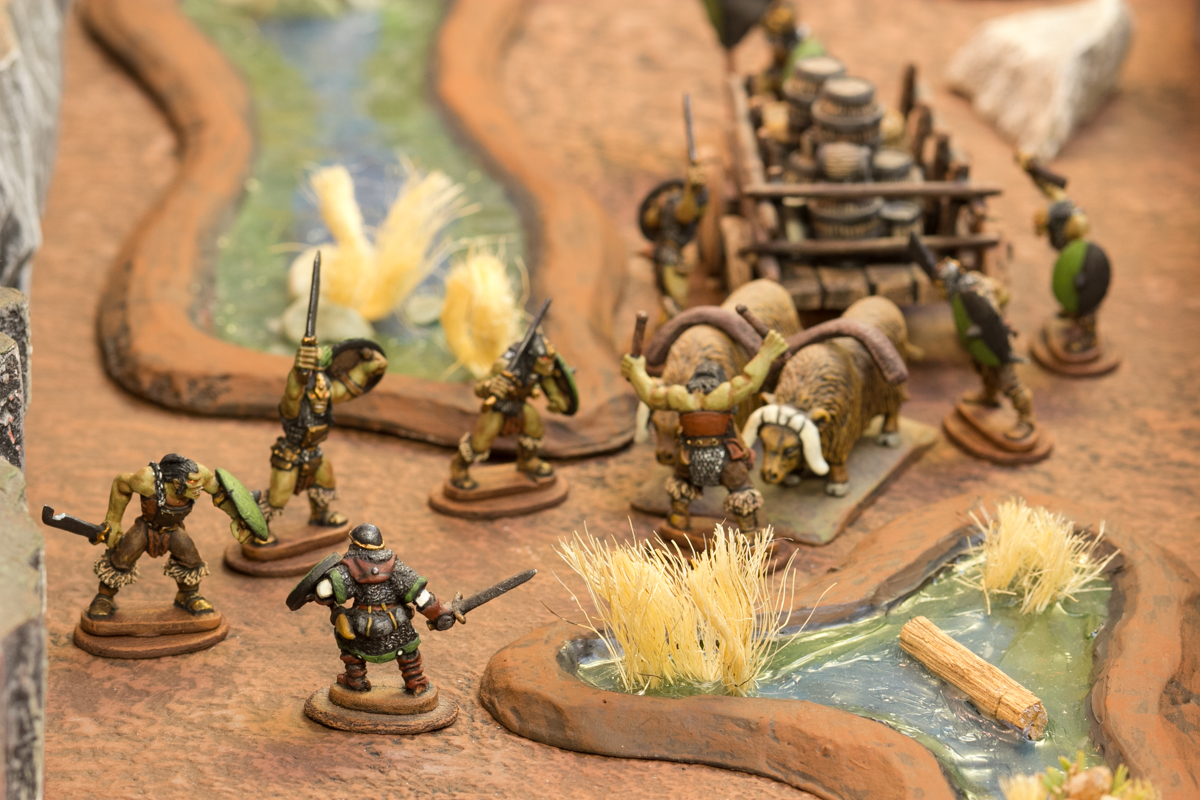 The wagon frequently bogged down in the mud and needed to be worked free.

Shapes moved in the trees. 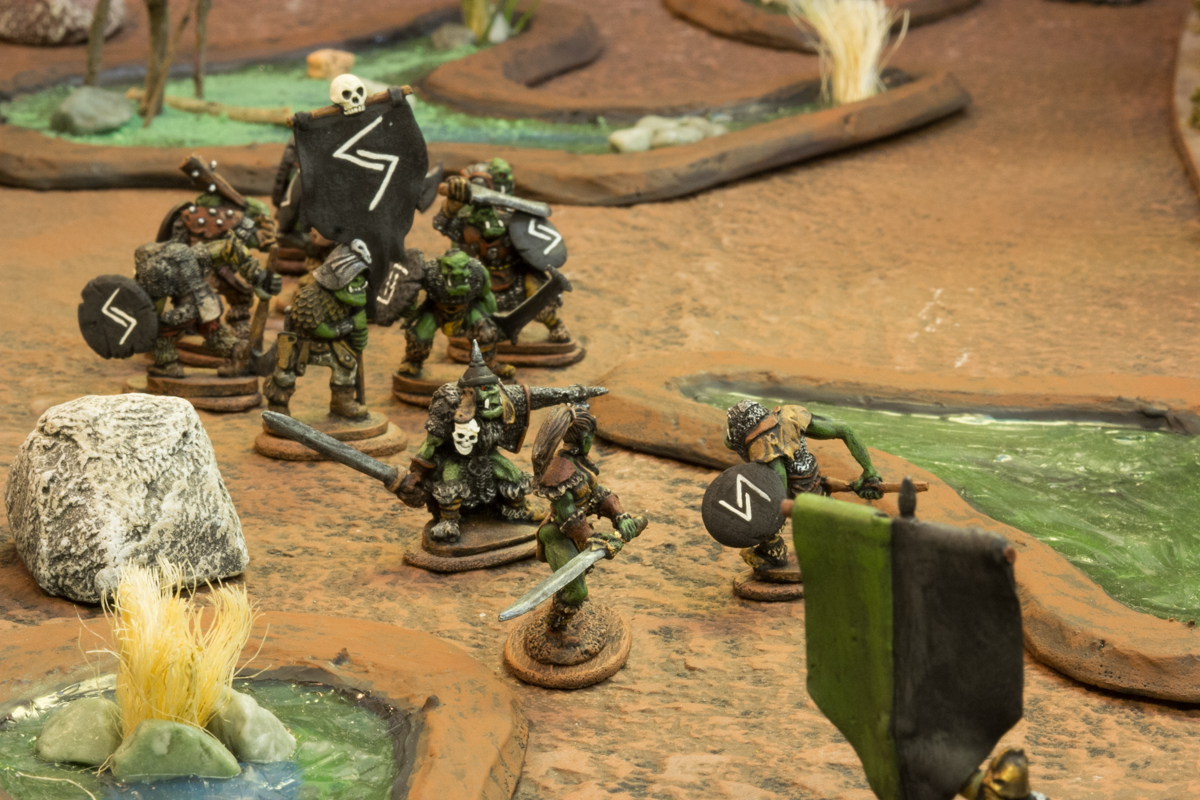 Vaak Akarya’s orc captain spotted something amiss off the road.

Savage orc screeches were heard from the high rocks. 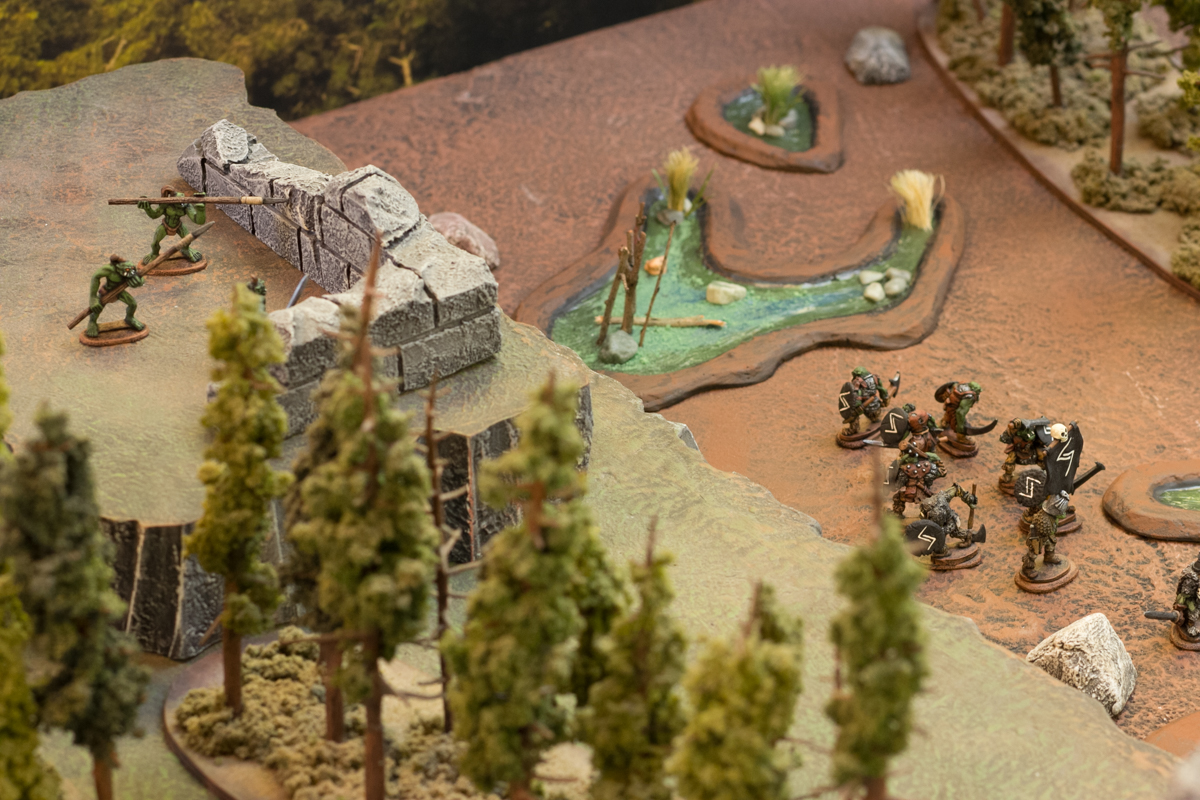 Several wild orcs appeared in the ruins on the cliffs above and hurled javelins at the stopped groups of orcs. 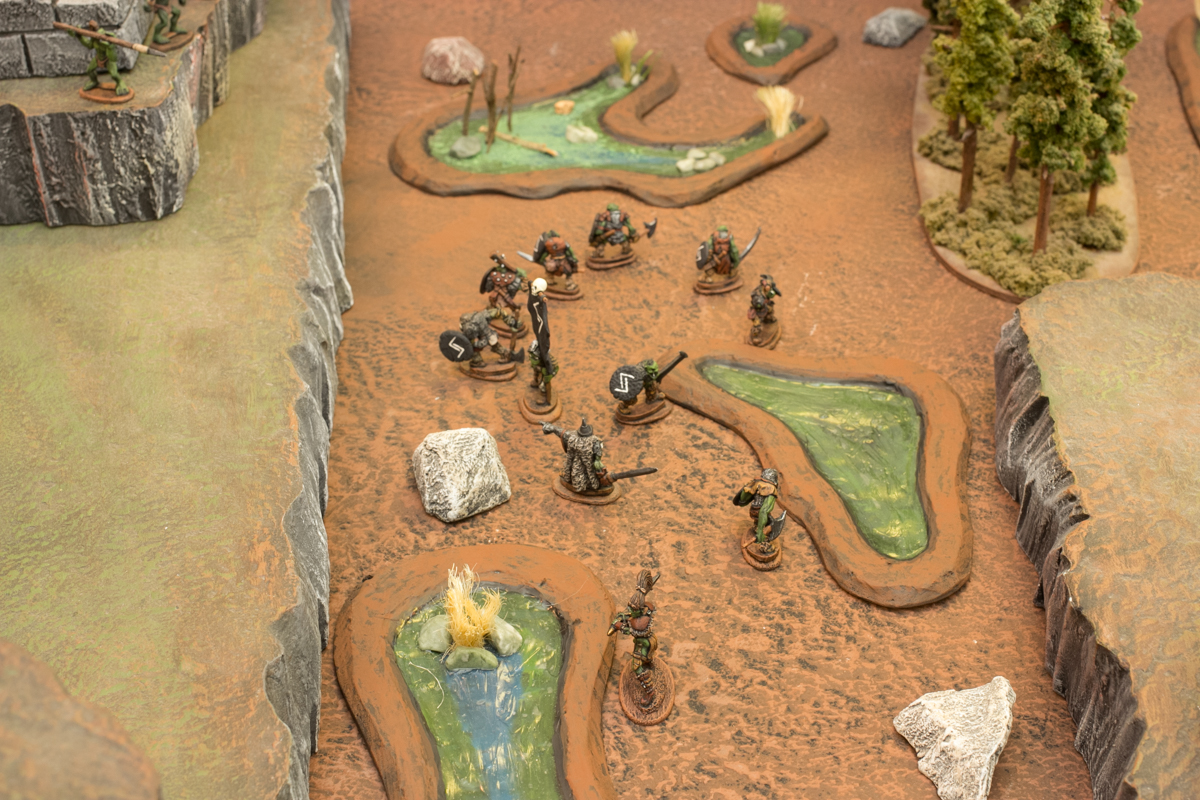 Vaak ordered her orcs to be ready for the ground attack while she went to the wagon.

A giant urog dropped from the cliffs into the road in front of them. 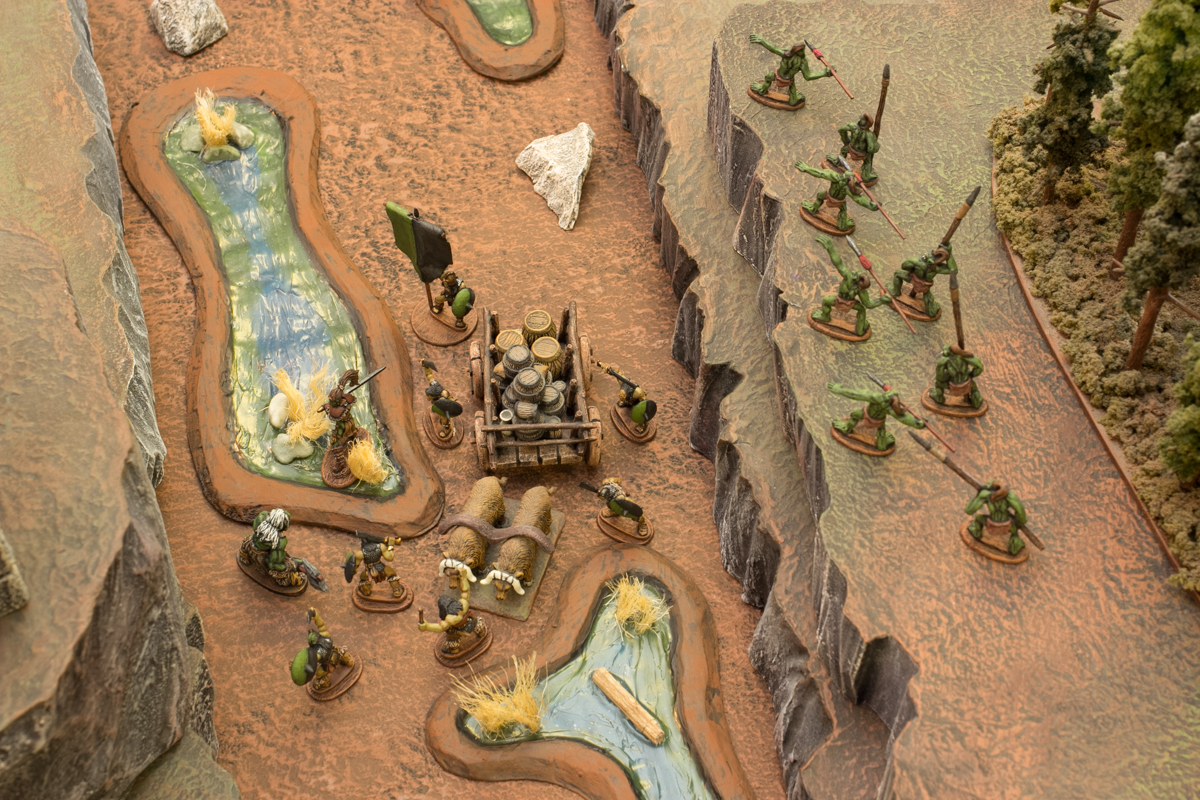 Vaak closed with the savage urog. 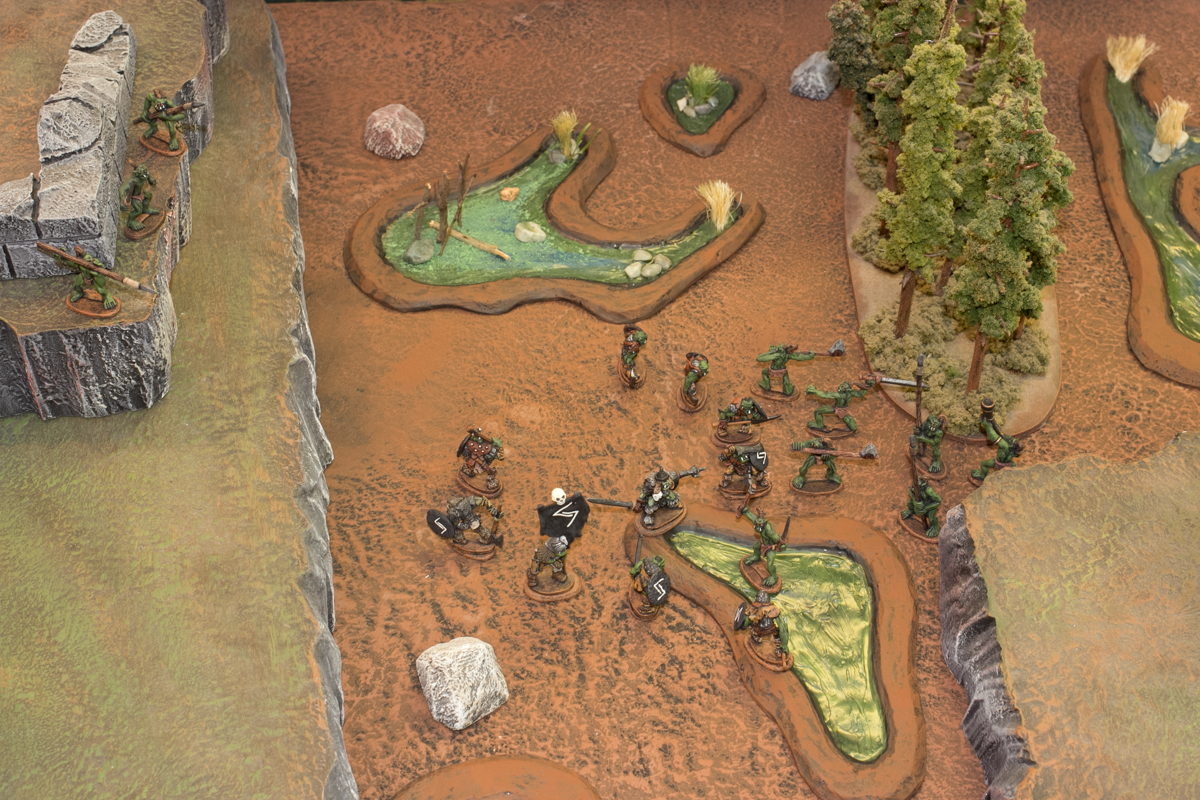 Vaak’s orcs intercepted the wild orcs on the ground. 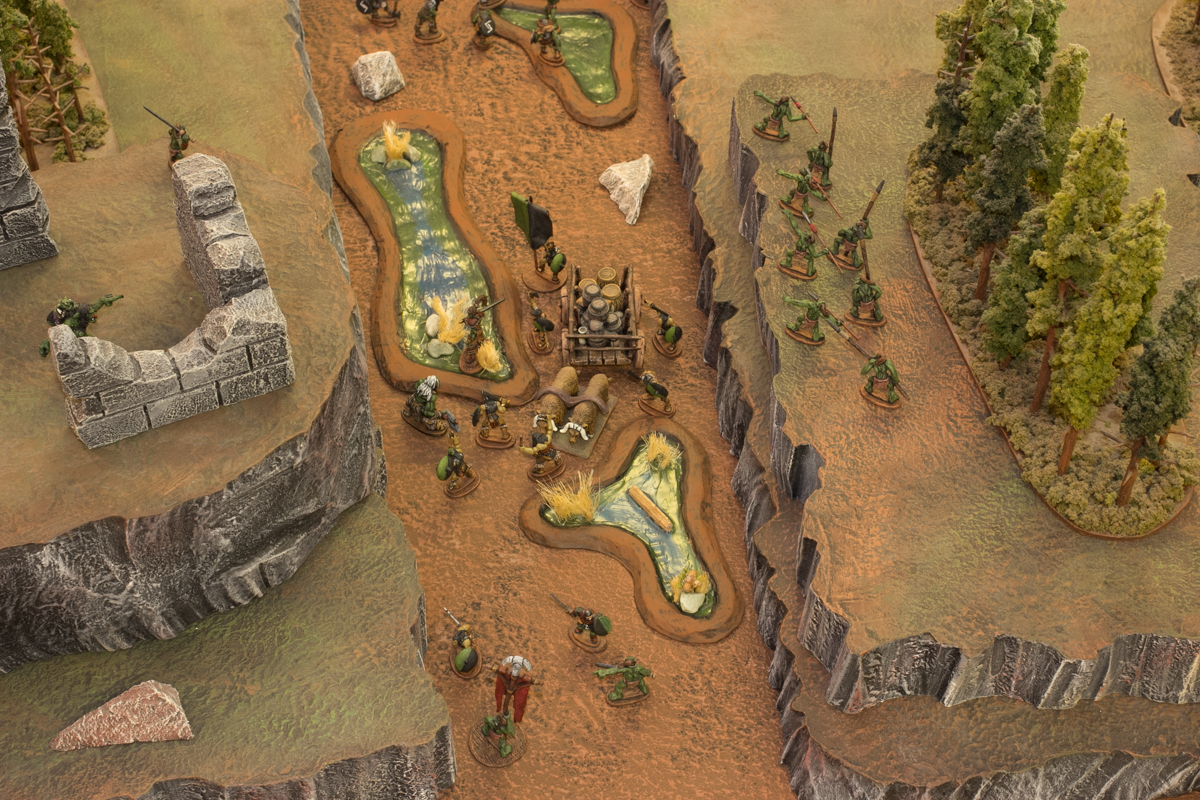 The steel weapons of the League forces were too mighty for the unarmored wild orcs.

The wild urog smashed Vaak to the ground with his massive hammer. As she fell, Gazzi’s valdgrafs stepped into the battle and surrounded the urog. After trading many blows with him, the valdgrafs at last overcame the giant.

With the death of their leader, the remaining savage orcs scattered into the woods. The caravan regrouped and continued the march to Dalthu.