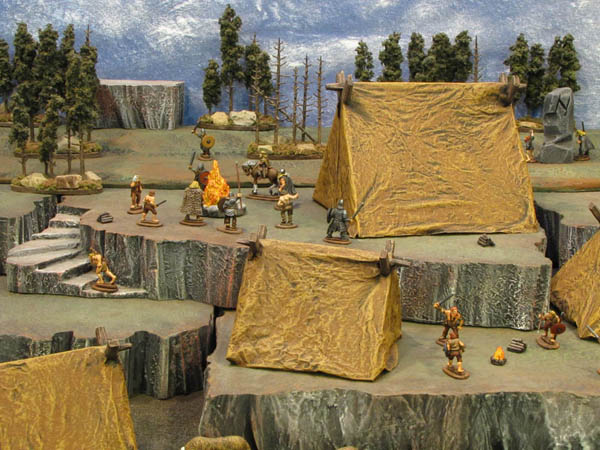 After the bonders had their voices heard in declaration for Kvig as king, many a man boasted of Kvig’s glorious battle deeds. Eventually, Kvig retired to the large tent with Halvdan, Roth, and a few of the other important bondi when word was brought of betrayal: a small group of the bonders from King Magnus’ clan were looking to make away in the night to warn the King of Kvig’s “treason”.

Wynston and Bleddyn quickly arrived behind the tent of the treacherous bonders to find several packing their belongings. Halvdan and Kvig approached from the front and accused Steinvar of Aremark. He spoke for the bonders from the King’s clan and admitted their plans, but no wrongdoing. He argued they were within their rights to leave out of duty to the true king. While he confronted Kvig, two of his men tried to slip out of the tent and into the stormy night. One evaded Wynston but Bleddyn captured, interrogated and slew the other.

With 10 traitorous bonders in his custody, Kvig and the bonders from Kvig’s fief of Strek returned to that village. 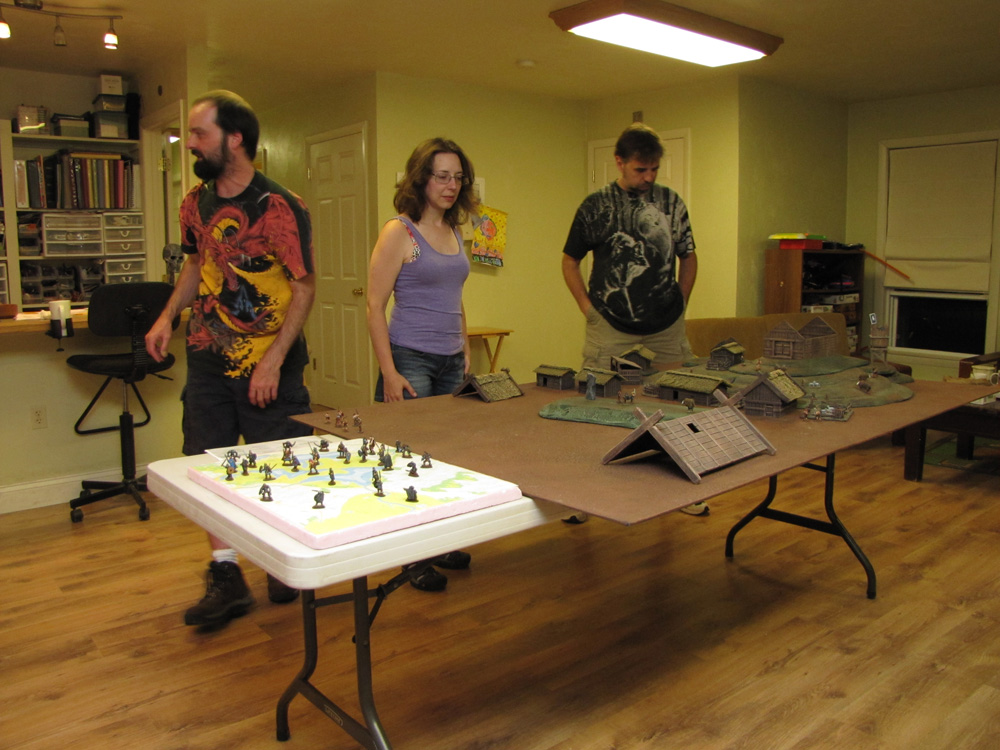 There was, as always, a warm welcome for Kvig from the adoring peasants of Strek. His wife-in-Strek was especially happy for him to see his young daughter. 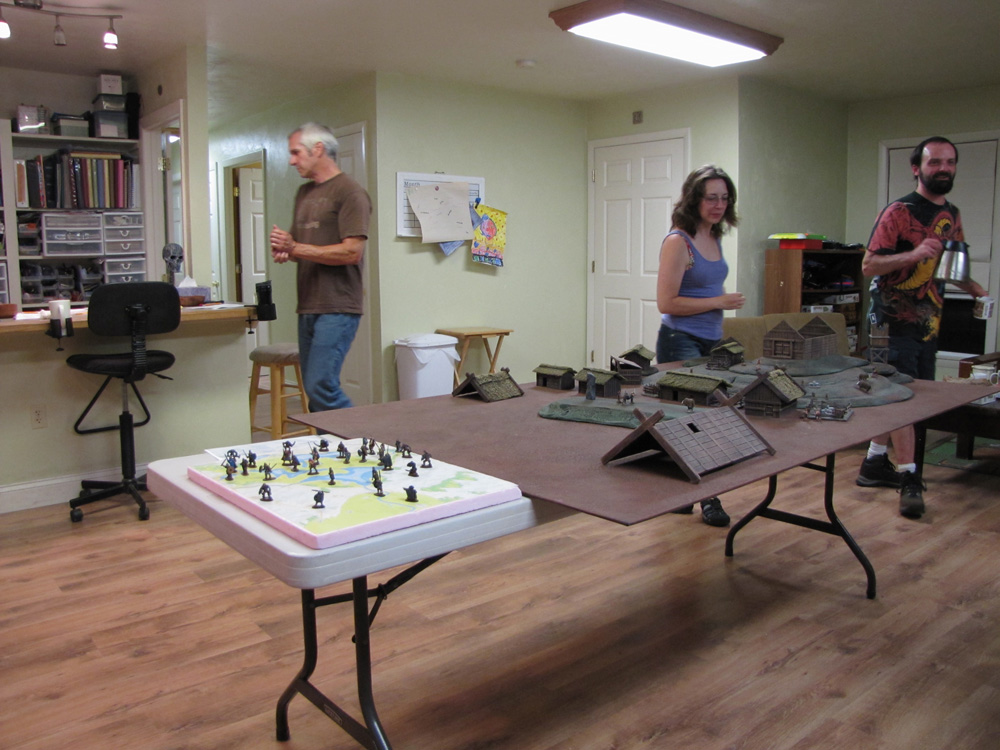 As the village feasted, orc deserters from the Untak division of Valden’s army (Sagas of the Gautrian Kings #40) sprung an attack. 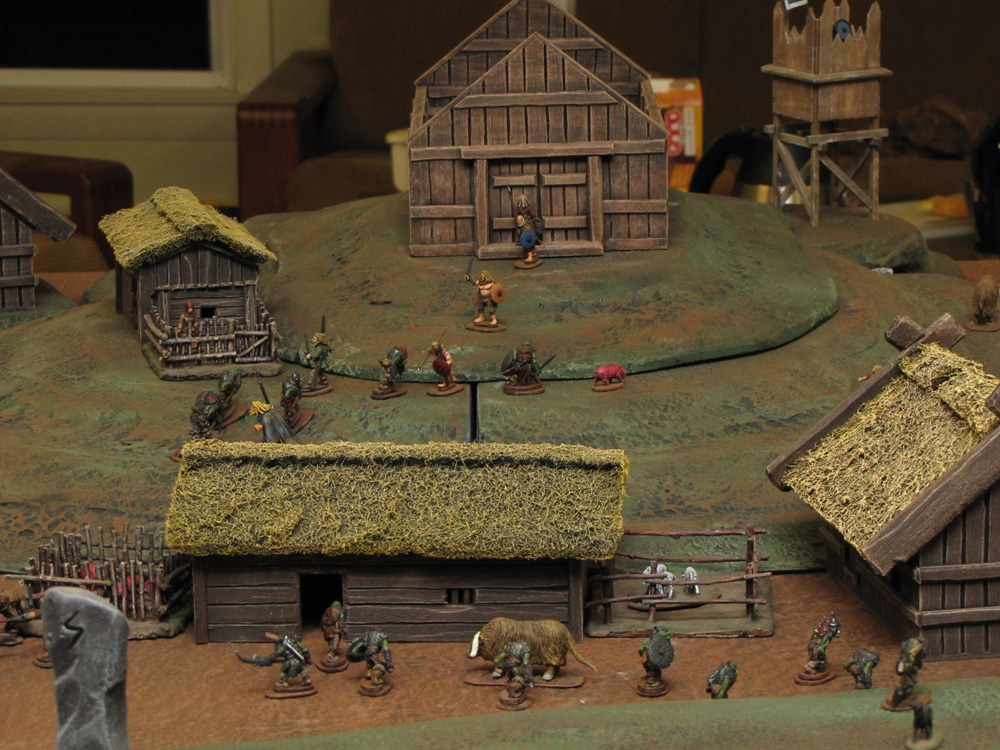 Kvig and his companions handily defended Strek from the unorganized orcs, and continued the celebrations.

The bonders were eager to fight for Kvig, but next year, after the planting. Kvig seemed content to winter with them, however Wynston argued they needed to garner support now, while their victory at Skarken River was on everyone’s minds. 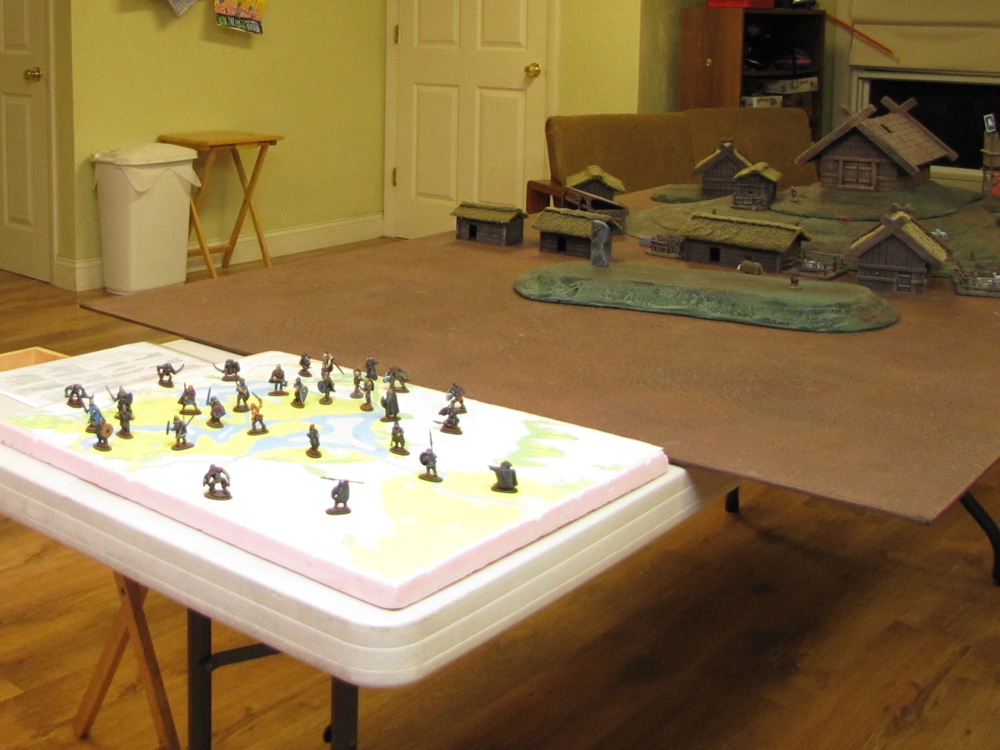 Wynston knew the jarls north over the lake would likely not give their loyalties to Kvig, but Kvig could still gain political prestige and military advantage if he had the support of Timlin’s many Kildarian knights who had fought under his banner at Skarken River. Wynston went to speak with the powerful Kildarian barons of Timlin, reminding them how Kvig kept the orcs out of their lands, and convincing the barons to come to Kvig in his hall at Strek.

First came Baron Vulmar, lord of Rathus and Herstal, leader of 50 Kildarian knights; he was bought with silver and the promise of the Barony of Timlin when the war was won. 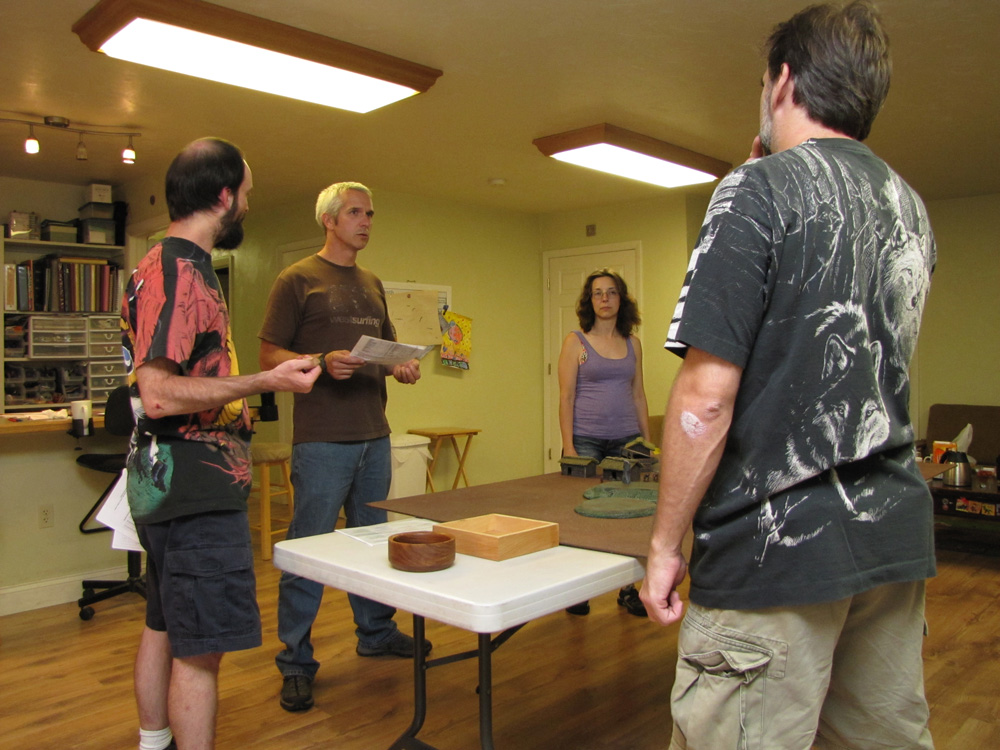 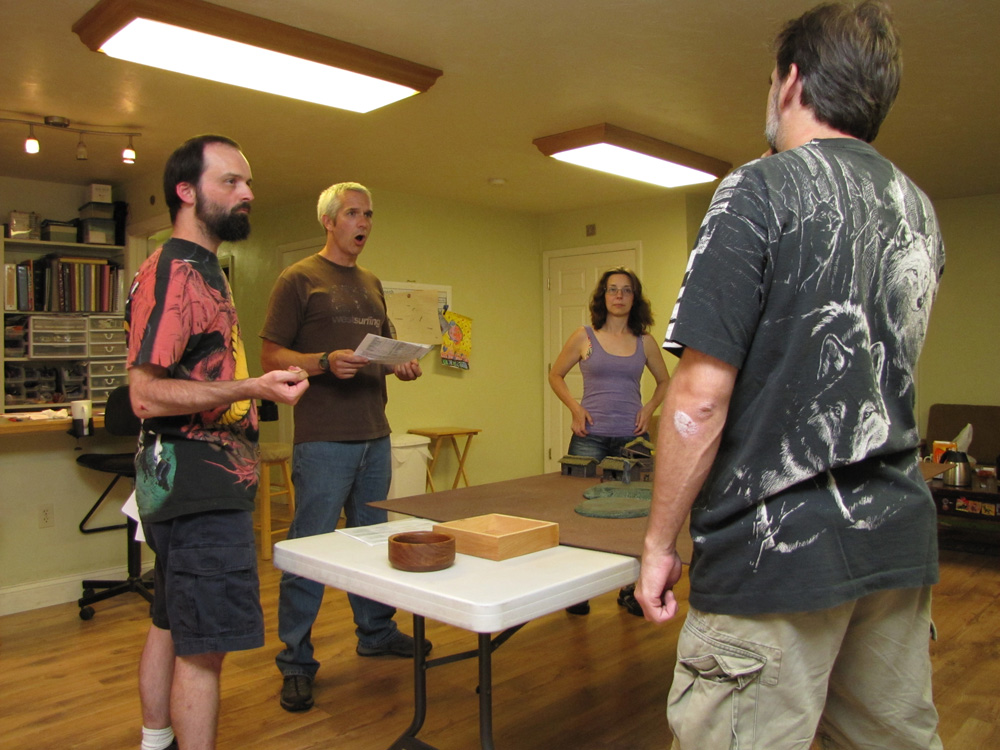 Unfortunately for Kvig, his eldest brother Hegg, the current jarl of Timlin, was not consulted on whether he would give up Timlin once all of Gautria was united under King Kvig’s banner! In fact, Hegg thought it was folly to challenge King Magnus. Once Hegg’s spies told him of the meetings going on at Strek, he began to fear for himself. On Hegg’s orders, Reinhard rode on Strek with 30 knights and escorted Kvig back to Timlin. 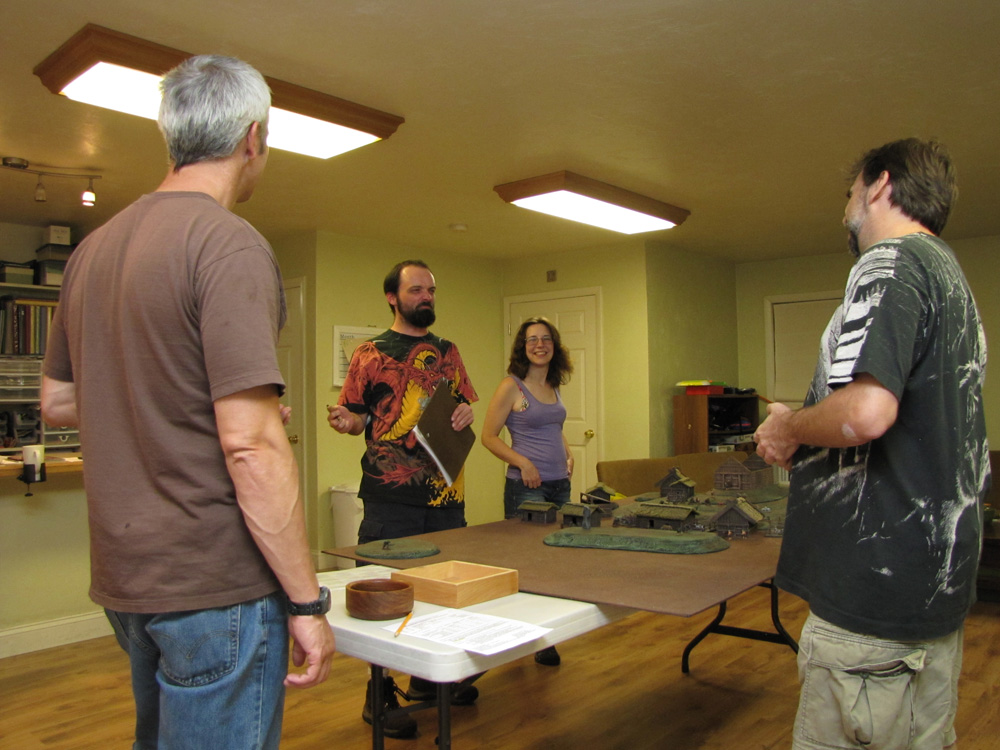 There Jarl Hegg berated Kvig for his ambitions and promised to deliver him up to King Magnus as a wedding present. Hegg demanded Kvig surrender his keen Thuringian warsword. 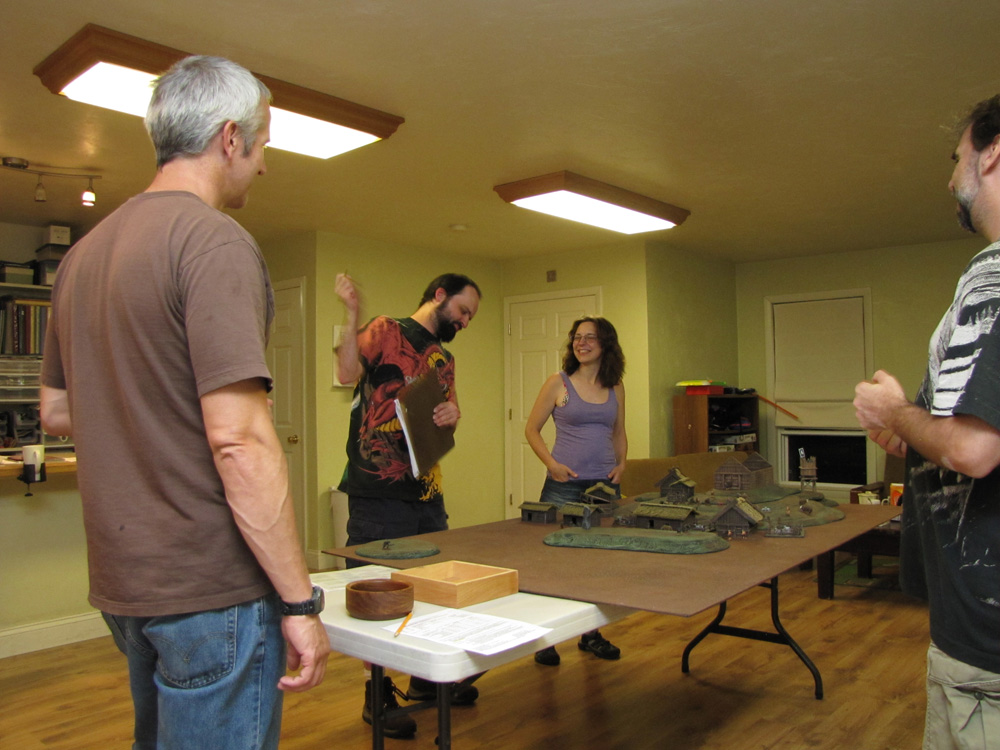 After handing over his heirloom sword, Kvig was unceremoniously dumped in the dungeon. That night, Wynston and Bleddyn came on 3 fast horses to the keep at Timlin. 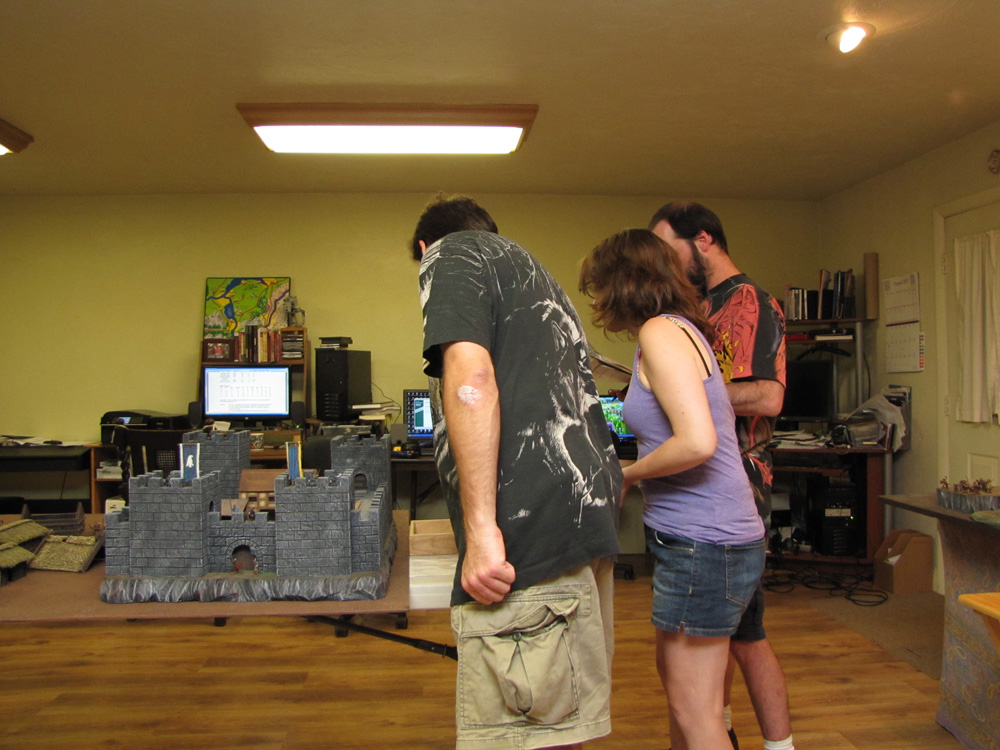 However, Bleddyn was discovered in the courtyard. Bleddyn surrendered, unwilling to shed the blood of those men who had fought Valden’s orc forces with him.

Wynston slipped away into the dark, leaving her jarl Kvig and his champion Bleddyn together in the dungeons of Timlin’s keep.