Entering our home, our players were greeted by the new gaming table top covered in new hills. 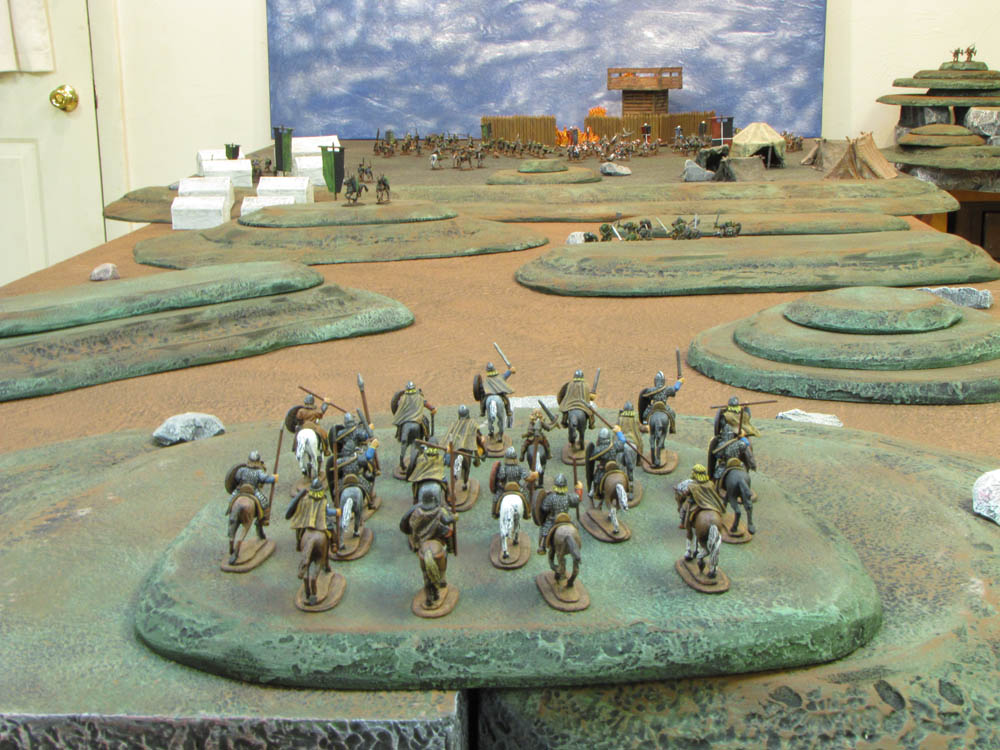 Upon the just-finished surface sat the remnants of the swamp fort of Skara from the conclusion of Sagas of the Gautrian Kings #38 . The smoldering ruins were surrounded by the Vangen orc horde led by the mighty urog King, Valden the Ruthless. Our players’ characters watched the destruction on horseback from a nearby hilltop. 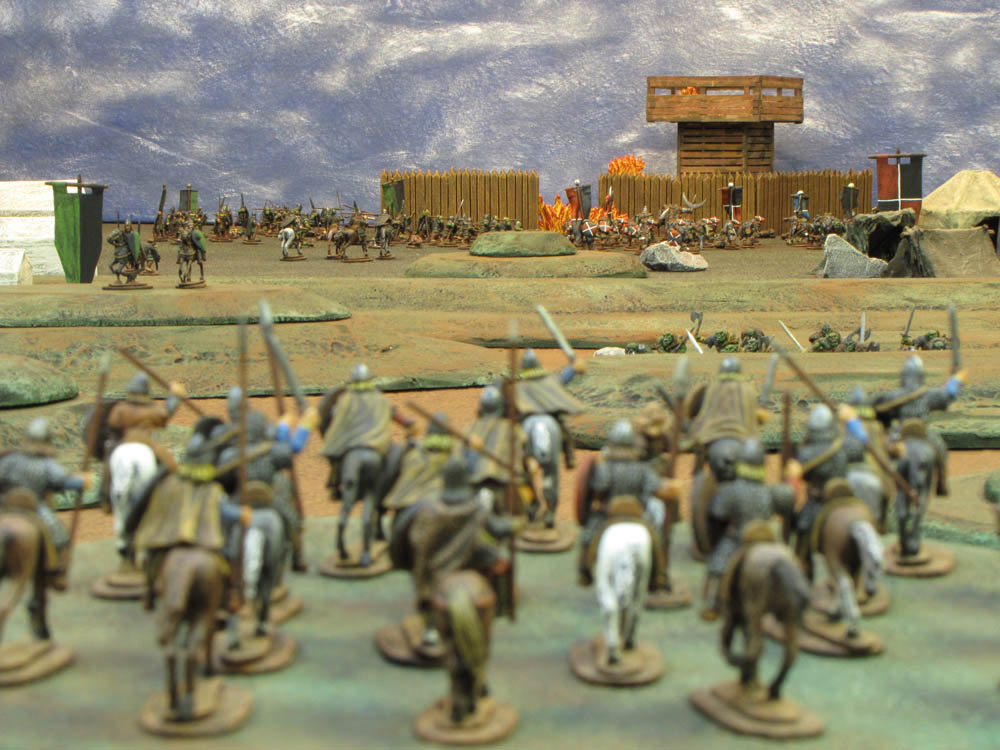 Bleddyn, the champion and scout, spotted a group of urogs who looked threatening, just as a Kildarian horn blast sounded from inside what was left of the stockade fence. A small force of human cavalry were attempting to break through the orc army and out of the carnage that was Skara.

Kvig led his own cavalry charge to engage the urogs and give the Kildarians time to win free of the siege. 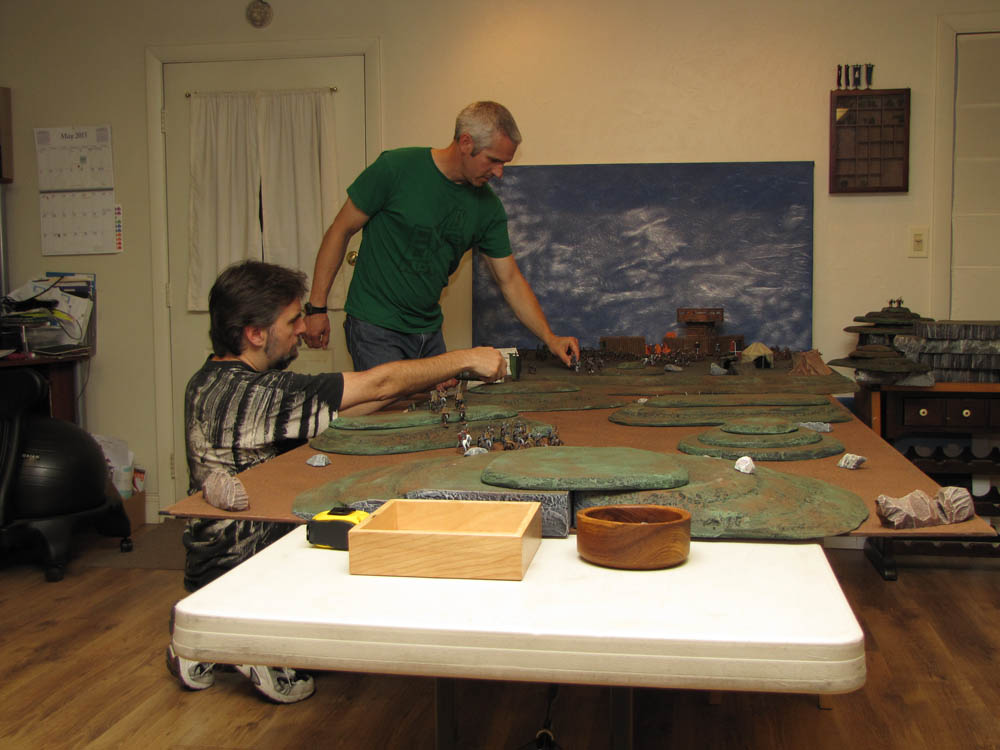 As Kvig’s Gautrian cavalry pounded over a hill, they were surprised by a second group of orcs, ready for the cavalry charge. Kvig with his superior horsemanship smashed through the line and led a few riders along towards the escaping Kildarians. Other Gautrian riders were forced to stop and fight the orcs.

Bleddyn had his horse cut out from beneath him. Wynston dismounted in the churning confusion of bodies and blood and slipped behind the battling orcs to do her damage. 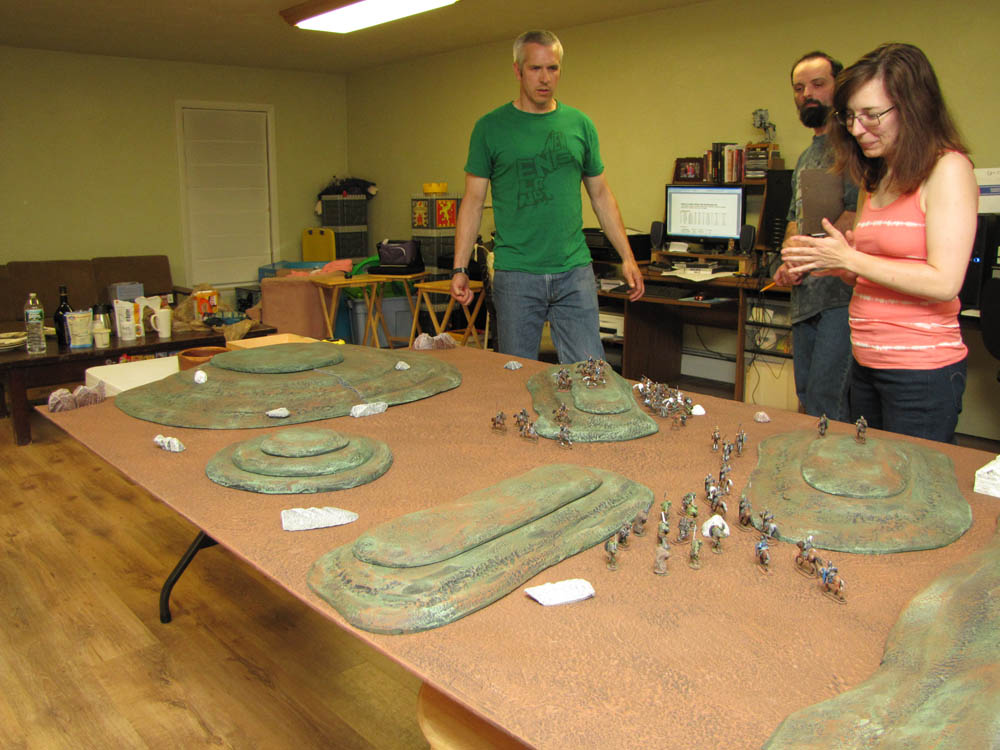 Meanwhile, Kvig and his riders closed with the urogs to create a screening force for the Kildarians to ride past. 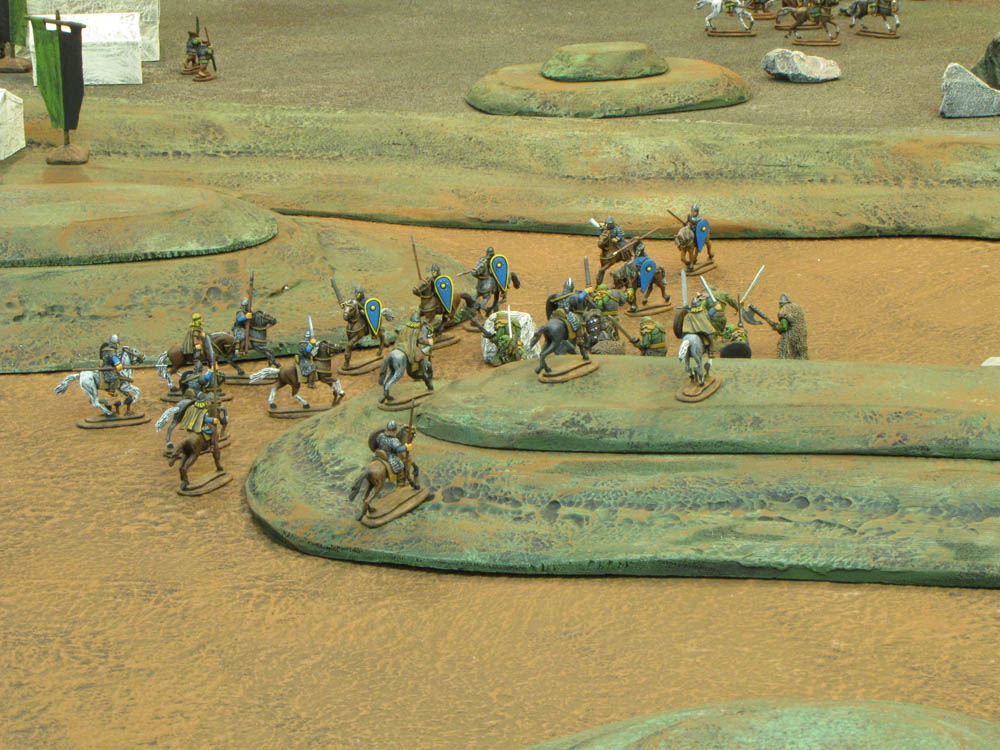 Kvig himself slew 2 urogs while occupying that force, gaining the humans needed time to retreat. 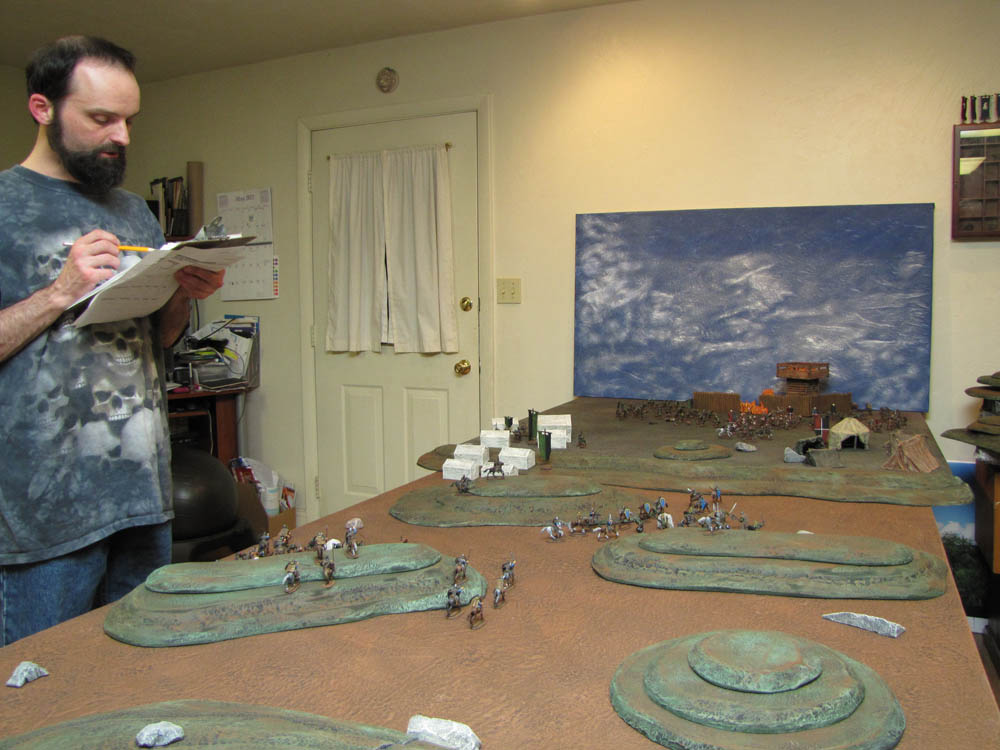 Bleddyn and Wynston were able to mount up double and the joined cavalry thundered away, leaving the smoking hulk of Skara behind them. 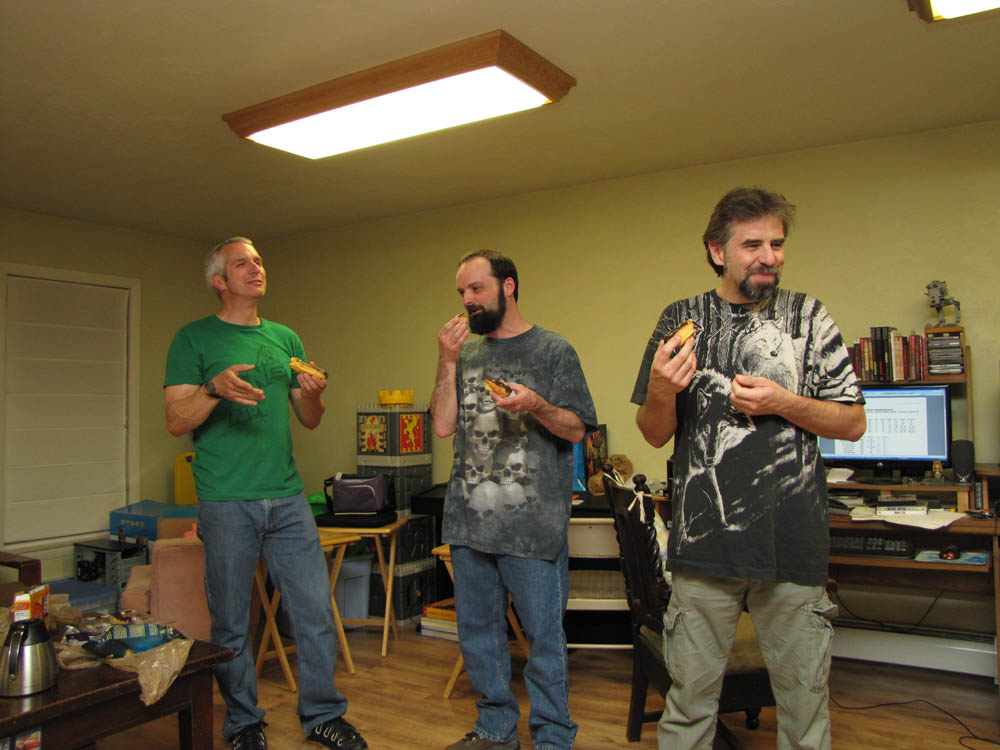 Kvig Melgarson led the troops north to King Magnus’ camp on the lakeside. 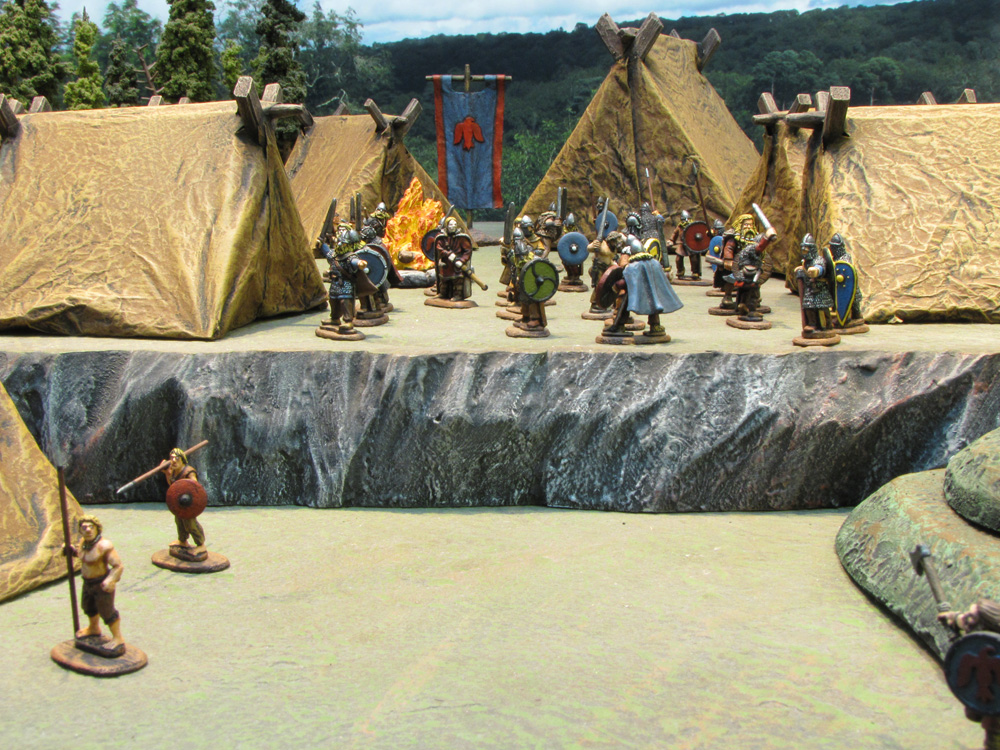 20 boats waited in the water to ferry the King and his troops back to Gautria and out of these contested lands.

Kvig continuously argued to press Valden and his Vangen orc horde now, while the Gautrian forces are massed. King Magnus was more wary; he would prefer to take the troops home and defend Gautria from their strongholds. Wynston tried to convince the King of the merits of Kvig’s plan. 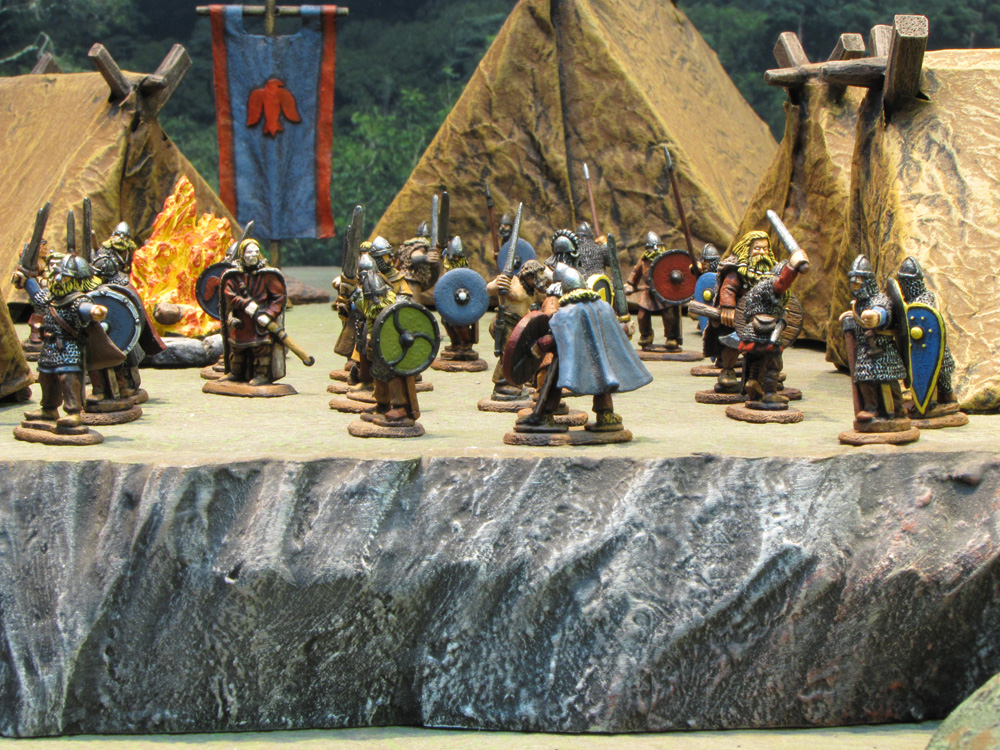 Just then, the camp was attacked! A goblin exploded 5 of the King’s ships in the lake, while a Nil-ith Horn strike force tried to assassinate the King. Fortunately for King Magnus, Wynston hid in his tent and slew 2 assassins before the King was blooded. Jarl Storolf, the father of the King’s betrothed, was also there and fought fiercely against the other 3 orcs once Wynston fell. The King too was grievously wounded. Kvig and Bleddyn crashed into the tent to finish the orcs. 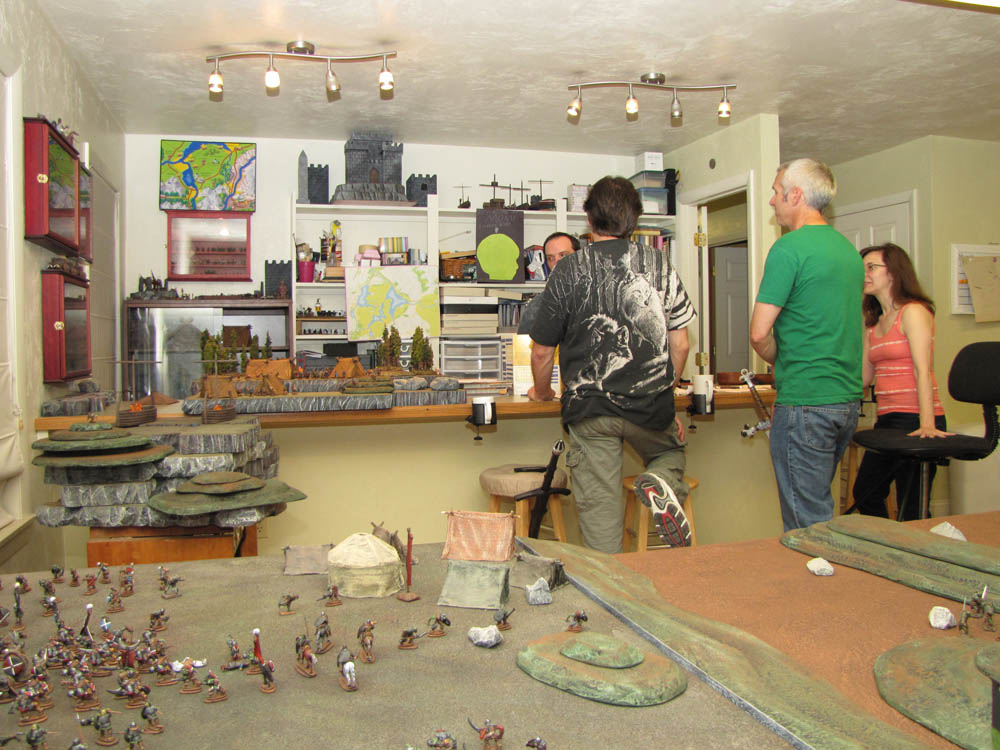 The King was left half-senseless and fragile, even after being treated for his wounds. Kvig urged King Magnus to name a champion. In his injured state, the King whispered fiercely to Wynston, then fell unconscious. 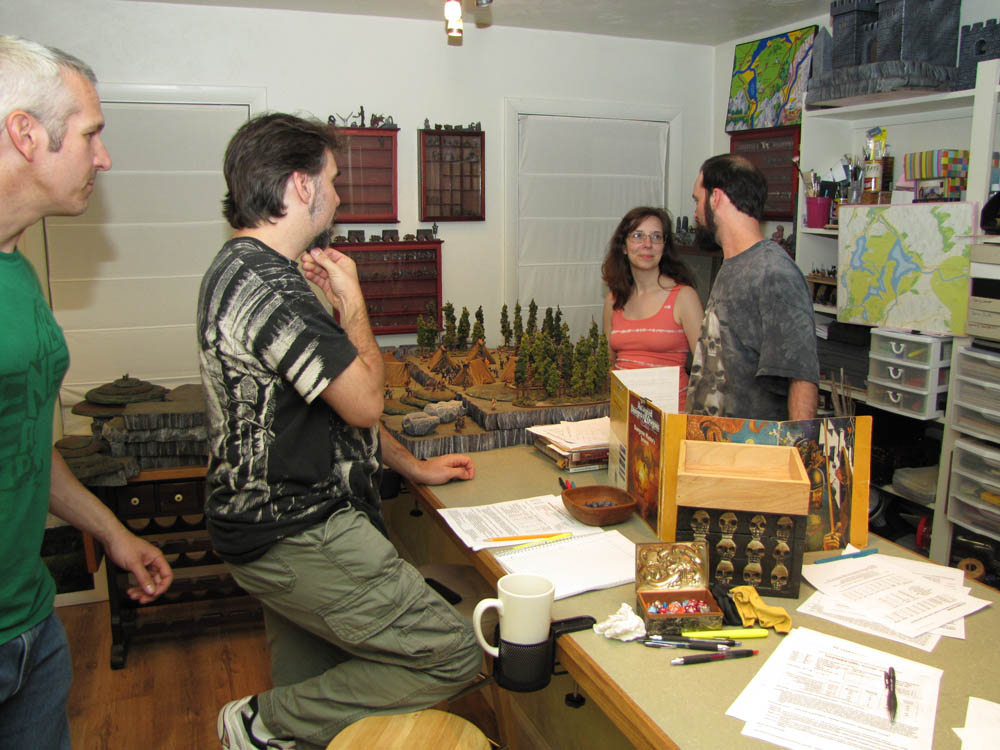 Wynston declared to the assembled Jarls that the King had named Kvig Champion and Marshall of the Gautrian forces. Further, the King was to be sent to recover at his stronghold. At next light, 2 boats and 50 men took King Magnus out onto Lake Sund towards safer lands.

Now Kvig has the Gautrian forces at his back, and hundreds of orcs waiting in the front. Where will the battle be joined? 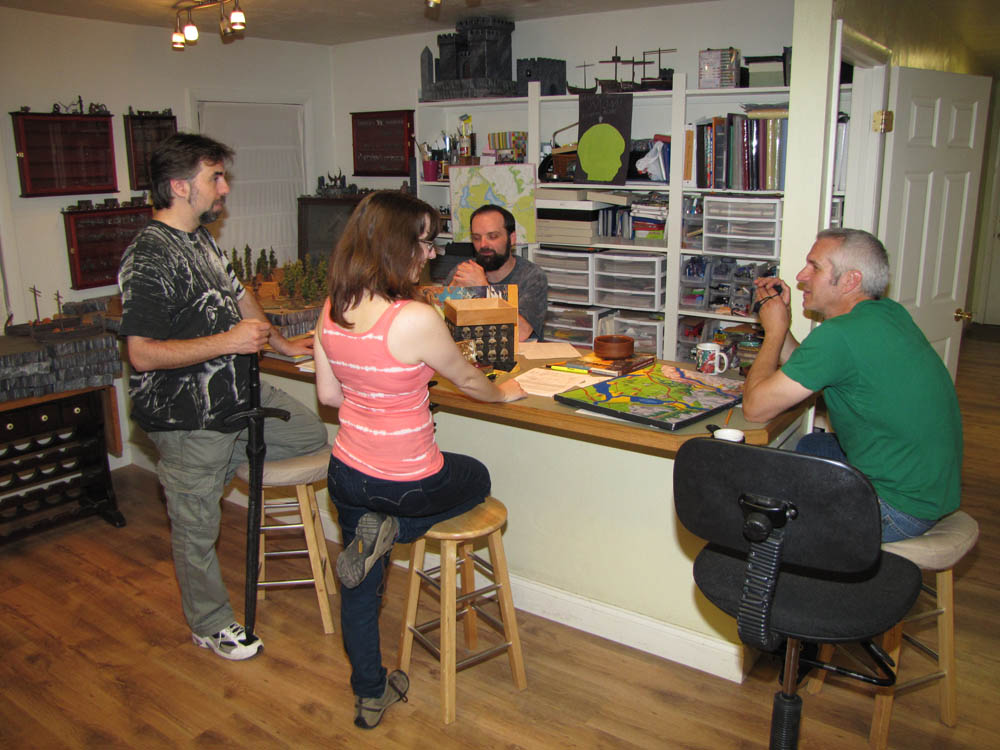 Find out next adventure!

Sagas of the Gautrian Kings #40- Prologue>>

<<Sagas of the Gautrian Kings #38- Skara Will Burn