We wanted to play-test some special abilities we’ve been researching/developing to bring mass combat Fantasy Warriors wargaming in line with the Conan D20 rules for RPGing, so we took to the table. We replayed the battle from Saturday night, with Teshub fighting as the League of Nil-ith horn (mostly) orc forces and myself as the Free Jarls of Gautria. 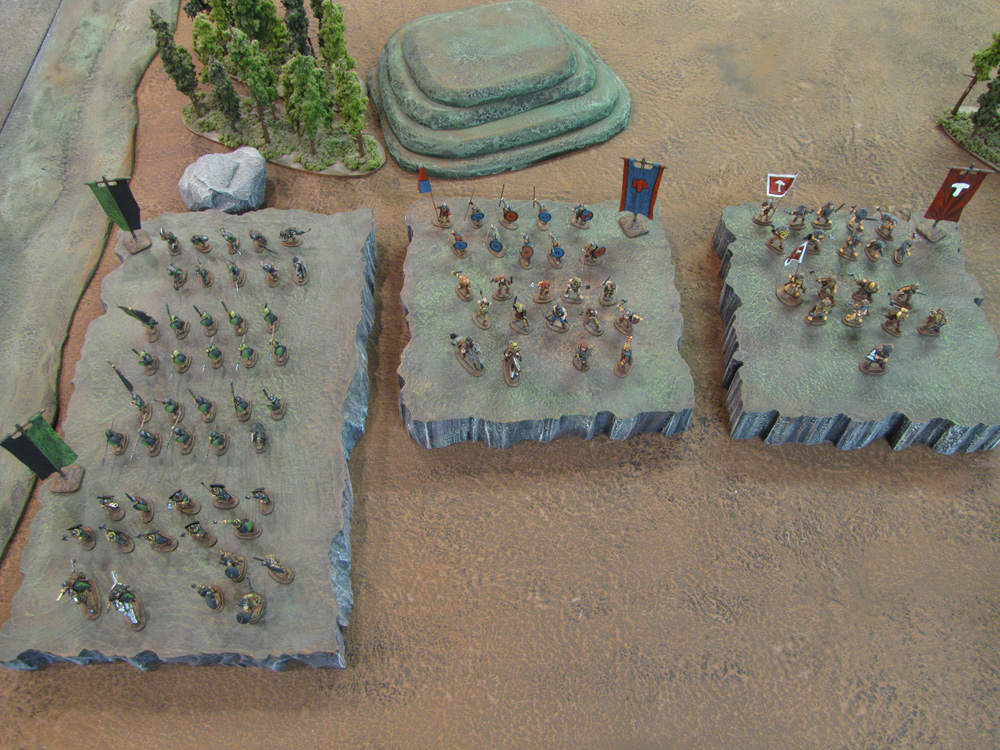 We each picked 2 special abilities (from a list of about 15 that Teshub will type up for me later). Teshub assigned “Last man standing” to his warlord, making the warlord the last figure removed in a unit, and “Bloodlust” which allowed him to put a unit into bloodlust. I chose “Diehard” for my leader, adding a +2 to his save, and  applied “Legendary Unit” to my berserkers which added +1 attack die for every 3 figures in the unit. 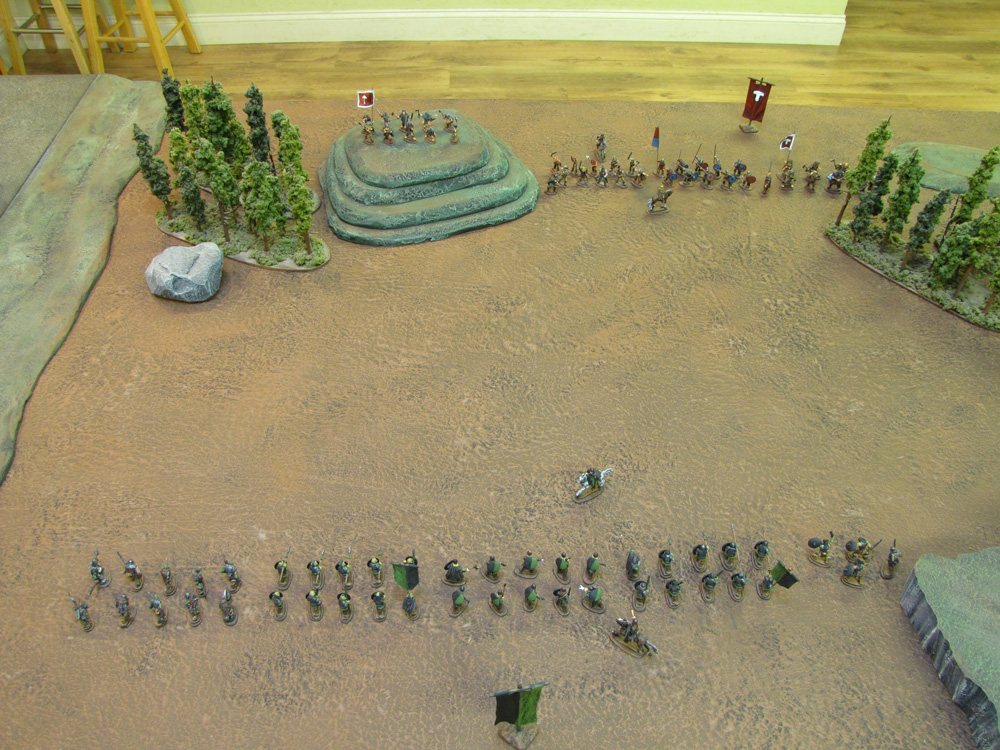 The League of Nil-ith Horn warlord arrayed his 3 units of heavy infantry in the open, with a unit of medium armored Vangen orc mercenaries on his left, and 4 orc heroes to his right. 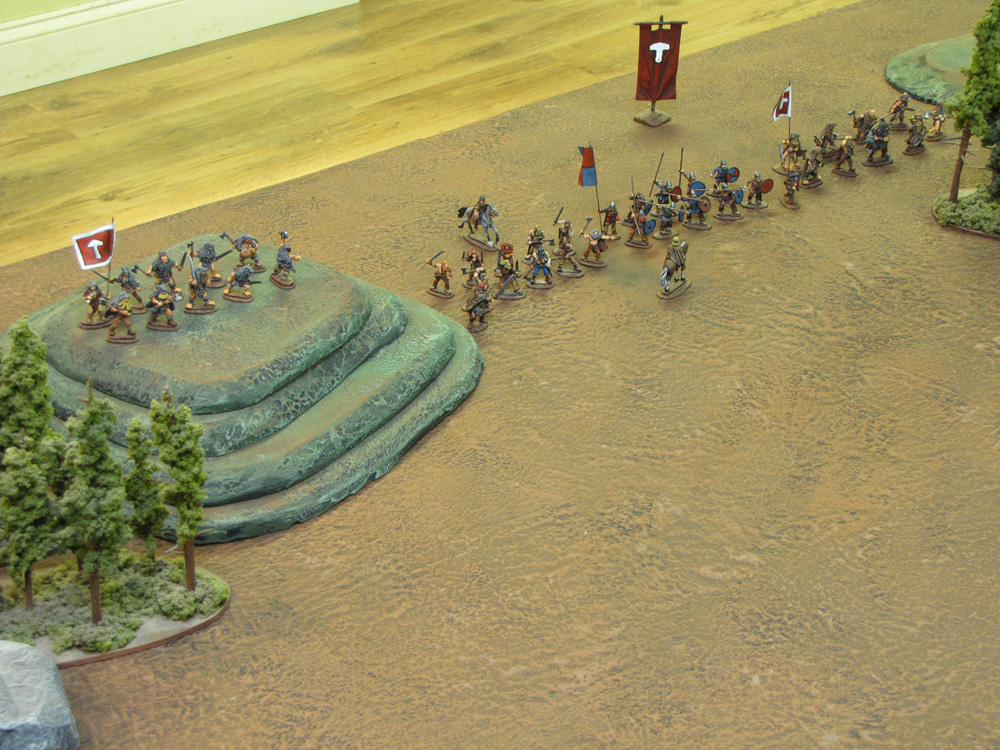 The Gautrian Jarl attempted to use the terrain to the advantage of his more mobile light ulfhednar and berserk units on his flanks, while his 2 slower infantry units kept to the center. The men of Gautria were bolstered by 2 enormous sword thane heroes and one giant champion.

Both leaders looked to stir their troops to victory. 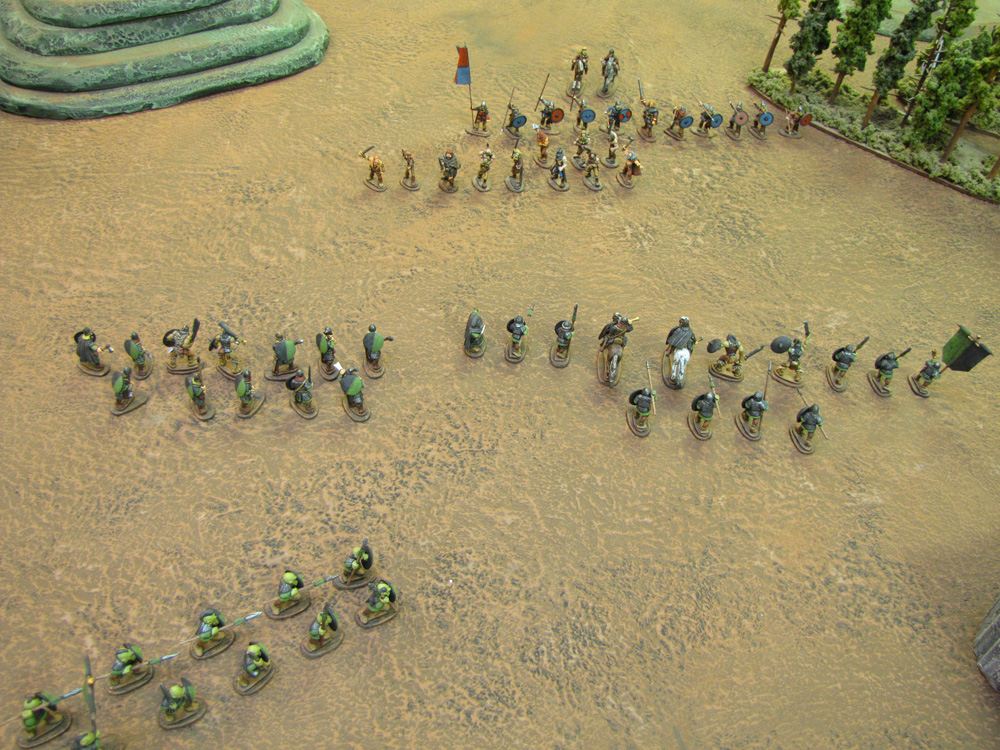 As the League forces began their steady march toward the Gautrian lines, the LNH Warlord drew his 2 Orc spear units together to fight in 2 ranks. The Gautrian Jarl moved his spearmen into like formation. 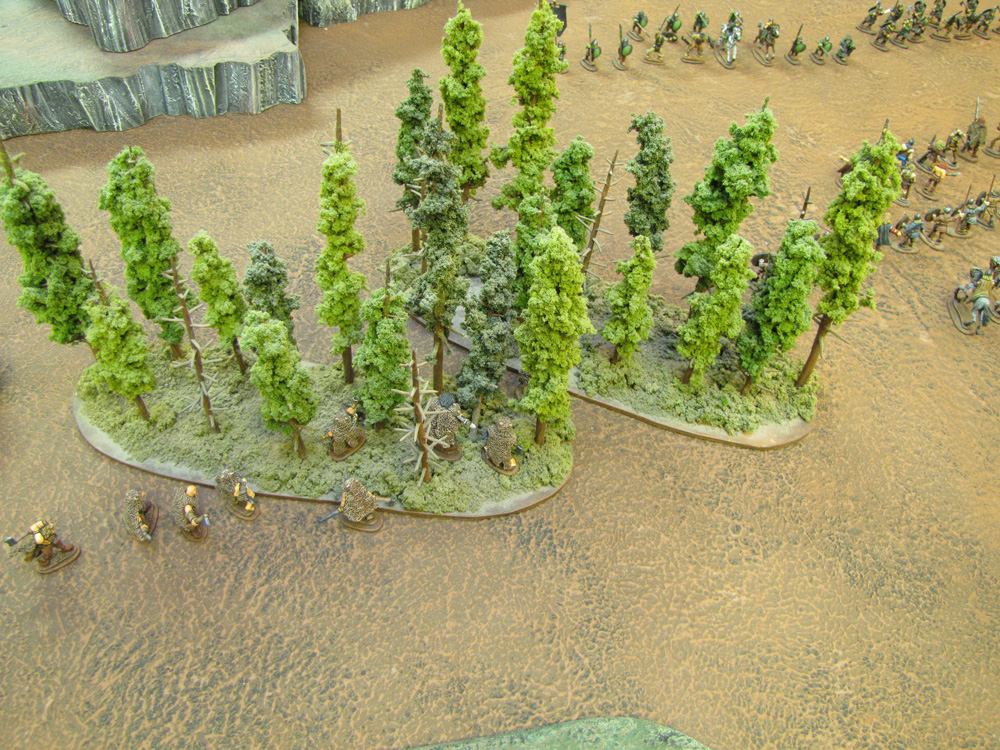 The ulfhednar spread out on his right, and the berserks with their giant hero snuck through the trees on his left. 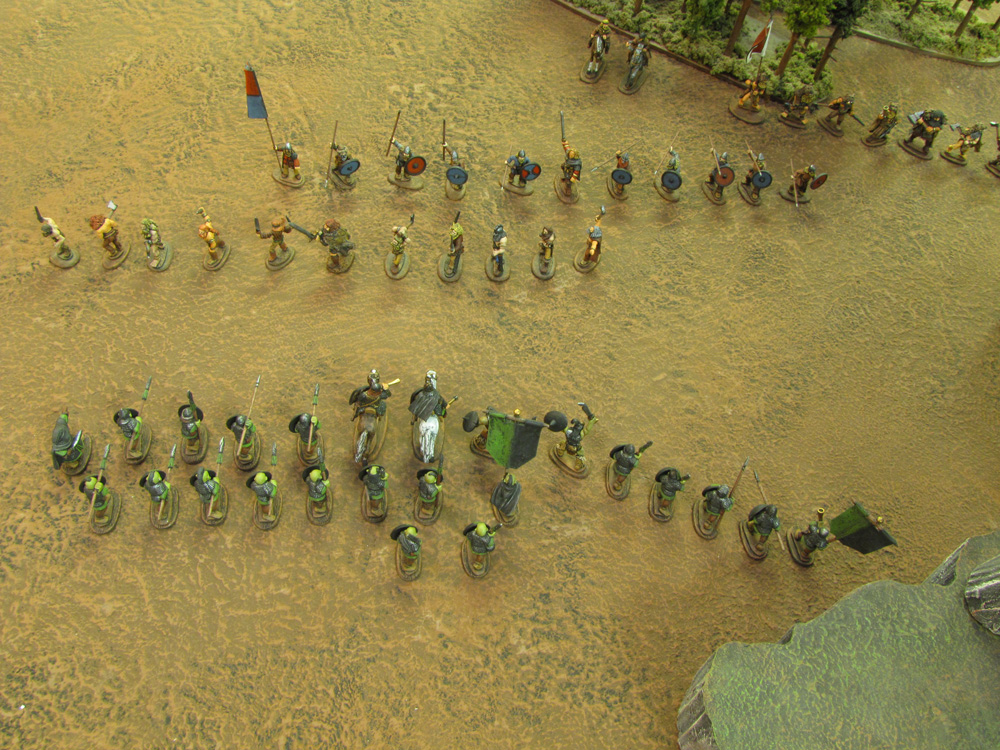 When they emerged from the woods, they saw the opposing phalanxes about to clash. 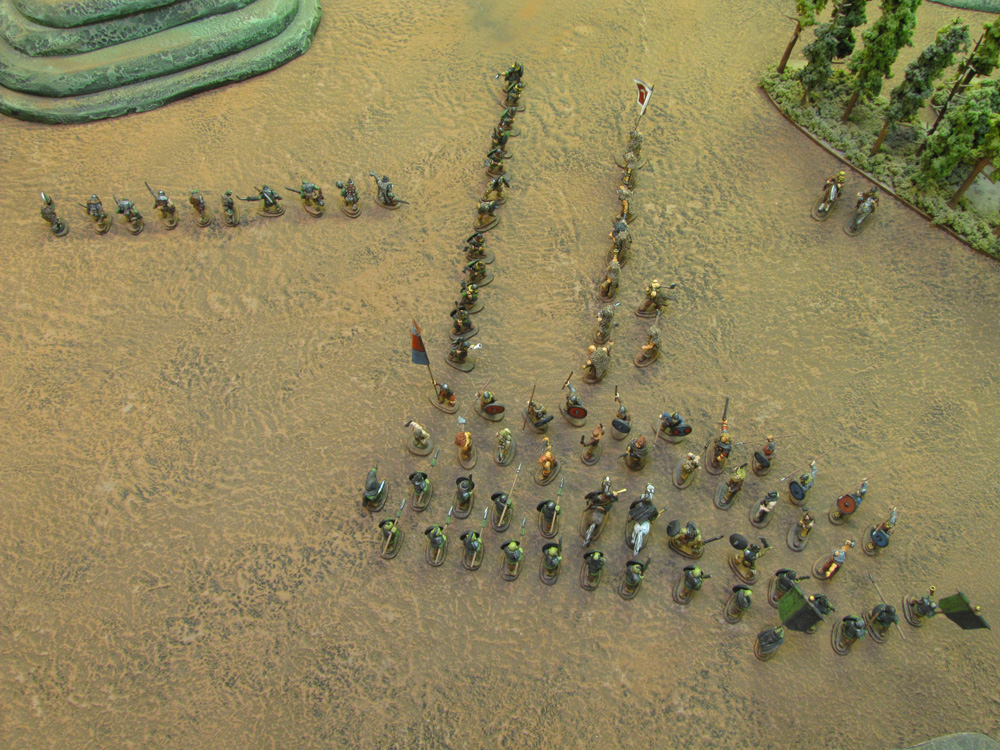 The spear units closed for attack and the bloodshed began. 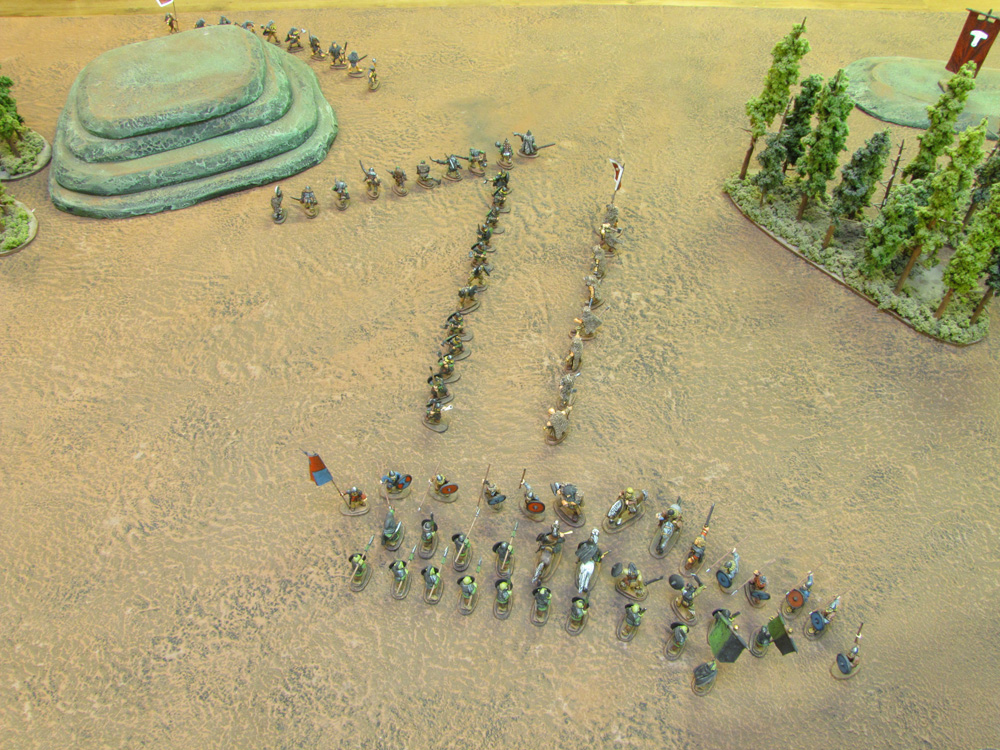 The heavy armor and mighty heroes at the center of the battle proved the difference for the LNH as the Gautrians crumbled. 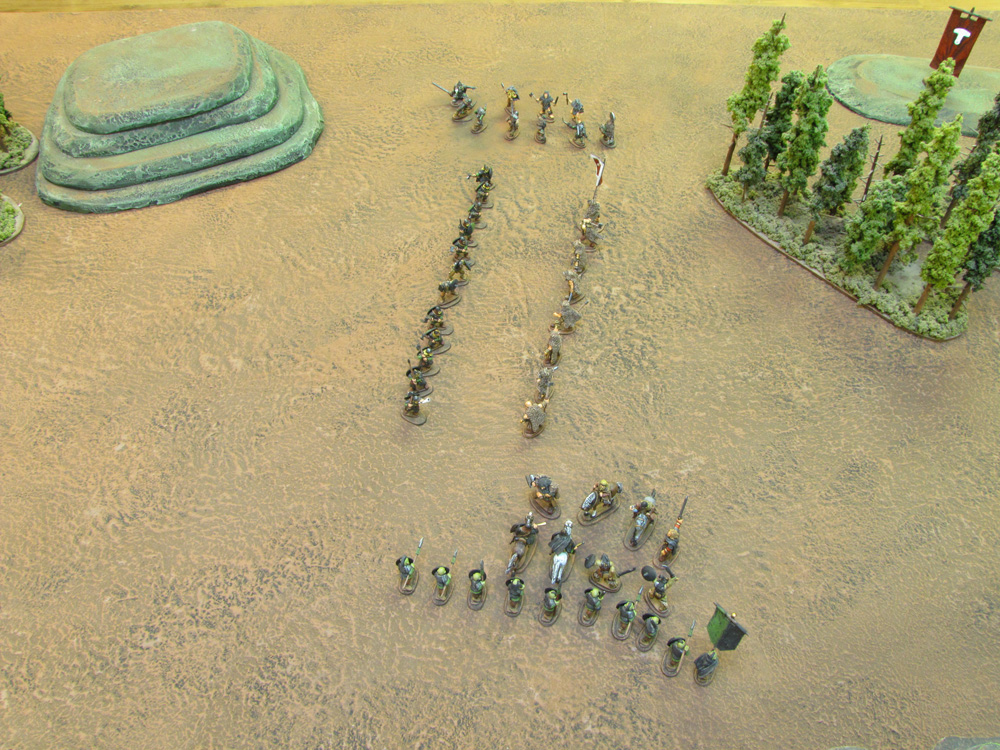 Unable to get his berserks into attack orders, the Jarl took his remaining heroes and plunged into the fray.  Seeing the fierce human berserks confused and holding their ground, the LNH Warlord refused battle there. The Ulfhednar moved in to strike so the Vangen mercenaries were thrown into Bloodlust by their unit leader. 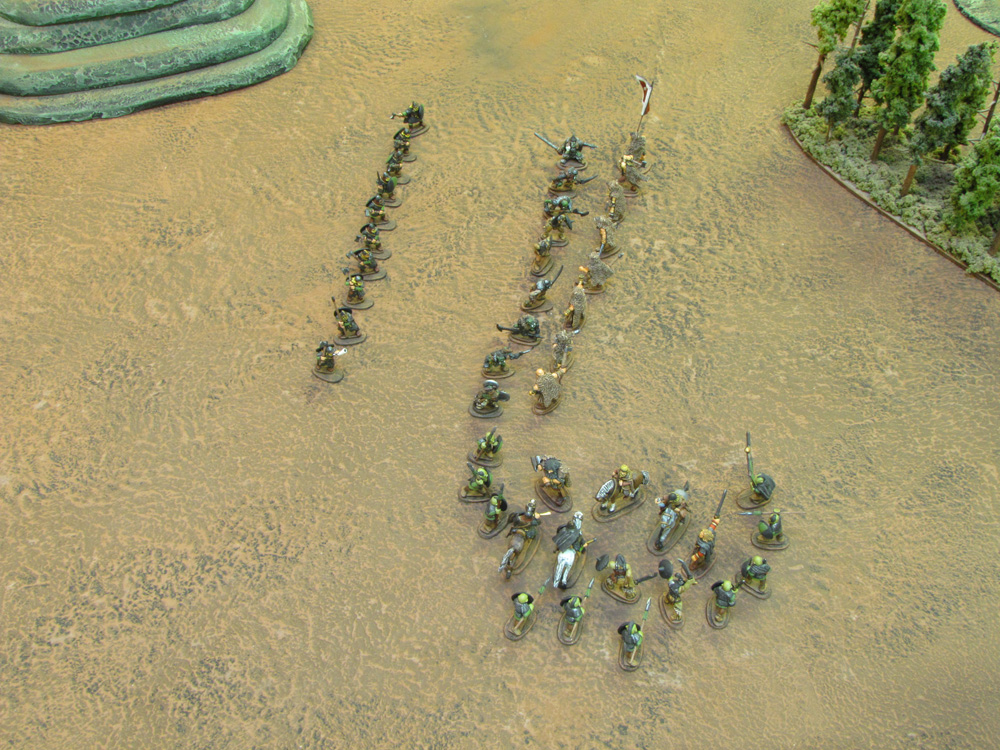 Enraged, the orcs savaged the Ulfhednar and annihilated the men in a single round.  Now blood drunk, the crazed orcs slammed into the Gautrians finest unit, the Berserks! On both sides there was great carnage and loss of life as the two units annihilated each other in the flash of two handed weapons. 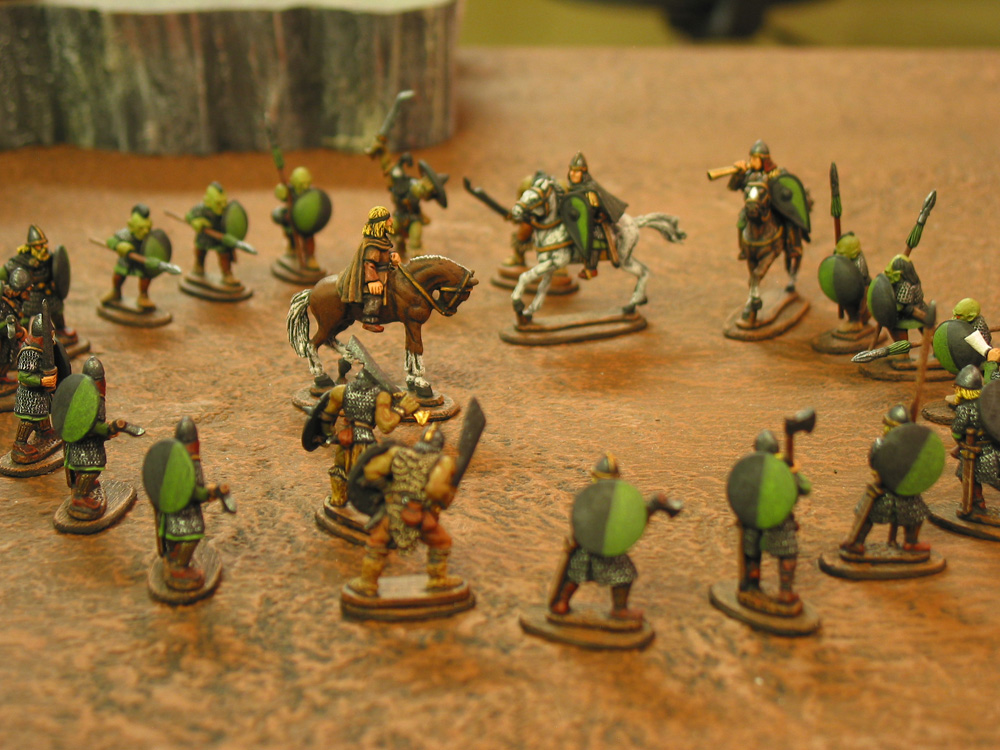 Alone and outnumbered the Gautrian had no choice but to surrender to the League of Nil-ith Horn Warlord.