The reunited people of Rathus thanked Aedelfrid and Melkor for defeating the bandits who were plaguing their village. There were a few healers among the villagers and they found woundwort and hemus in the bandits’ loot. Aedelfrid helped them treat the wounded warriors and prisoners. Her betrothed, Ottar, son of Jarl Gudmar, was most grievously injured. They bound his wounds, but wanted to get him to a bed in Rathus quickly.

When the bedraggled company arrived in Rathus, they were unexpectedly confronted by Jarl Hegg Melgarson of Timlin Town. He had an impressive contingent under his command. 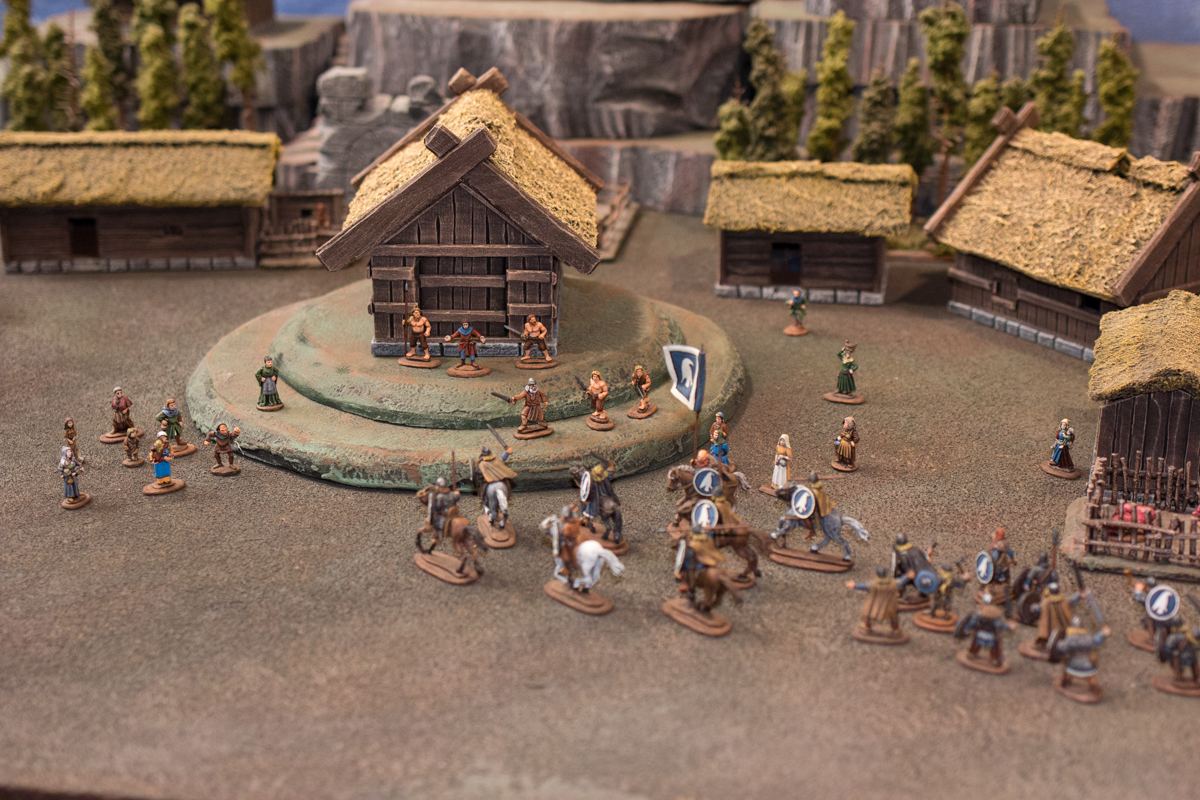 Jarl Hegg rode at the front of his mounted elite Gautrian thanes, and was followed by his brother Kvig’s former legendary thanes and a unit of bondi from Timlin.

Hegg was angered that Ottar was fighting in these lands at all, so far south of Gudmar’s holdings.

“These people came to us for aid, Jarl Hegg,” spoke Melkor Voclain. “We meant no disrespect to you, or to my father, lord of this village.”

“You do not need to remind me who should be protecting this hamlet,” said Hegg. “Vulmar Voclain has thrown in with my traitorous brother Kvig and absconded north. That doesn’t give your Jarl the right to be here. And,” Hegg sneered, “Vulmar has no legitimate son I’ve heard him speak of.”

“Men,” said Sverting, the bondi leader of Rathus. “Let us share the joy of the return of our kinsfolk, and feast together on the recovered bounty.” 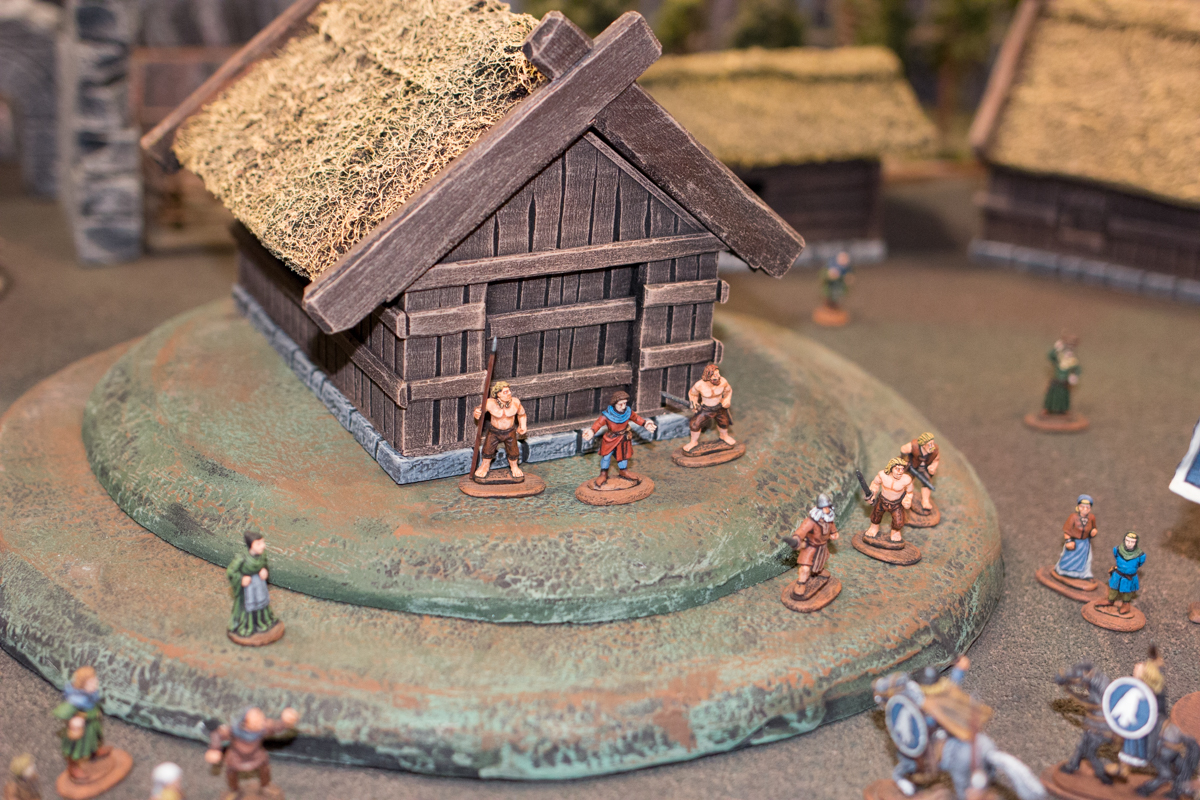 “Take care of our horses, bonder, and bring me my portion inside,” Hegg demanded. “We march in a few days to join King Magnus. Have food ready for my troops to travel with.”

Hegg snapped at one of the foot soldiers, “Arnsten! Secure the prisoners.” 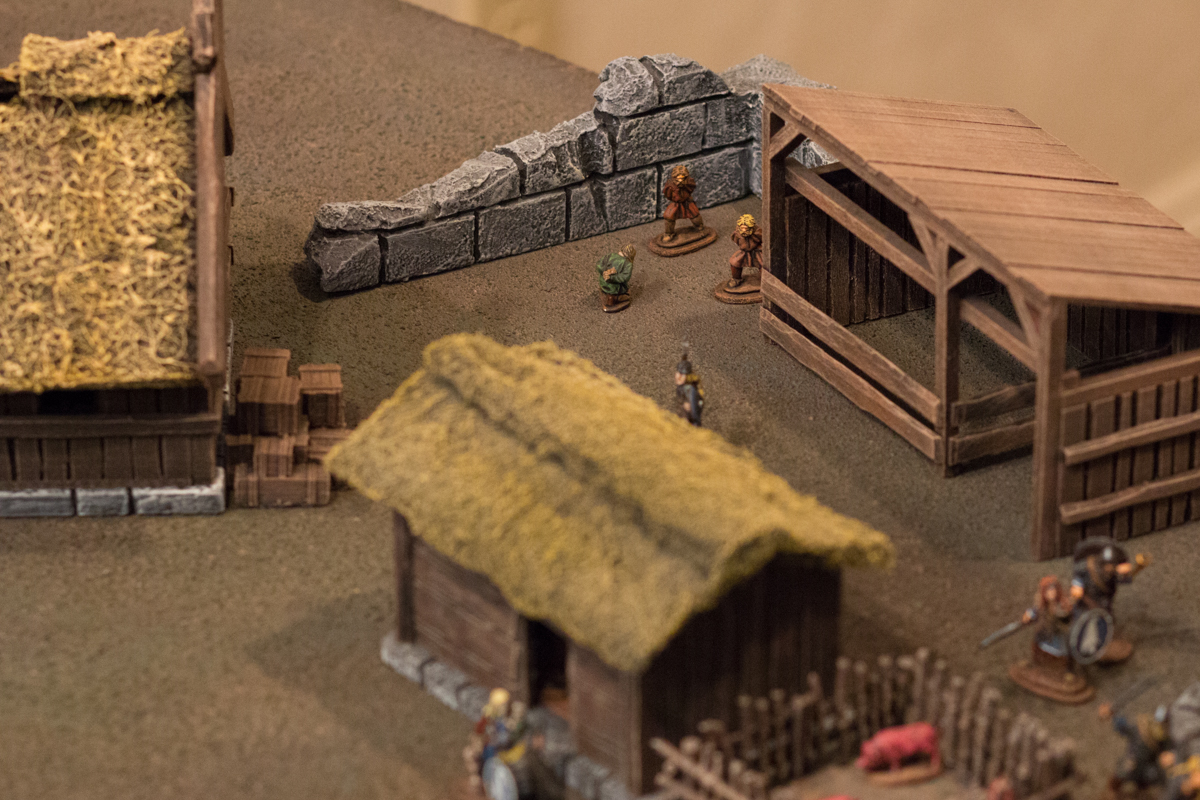 The captured bandits were taken behind the stable to be interrogated.

Hegg swung down from his horse and strode into the wooden hall. 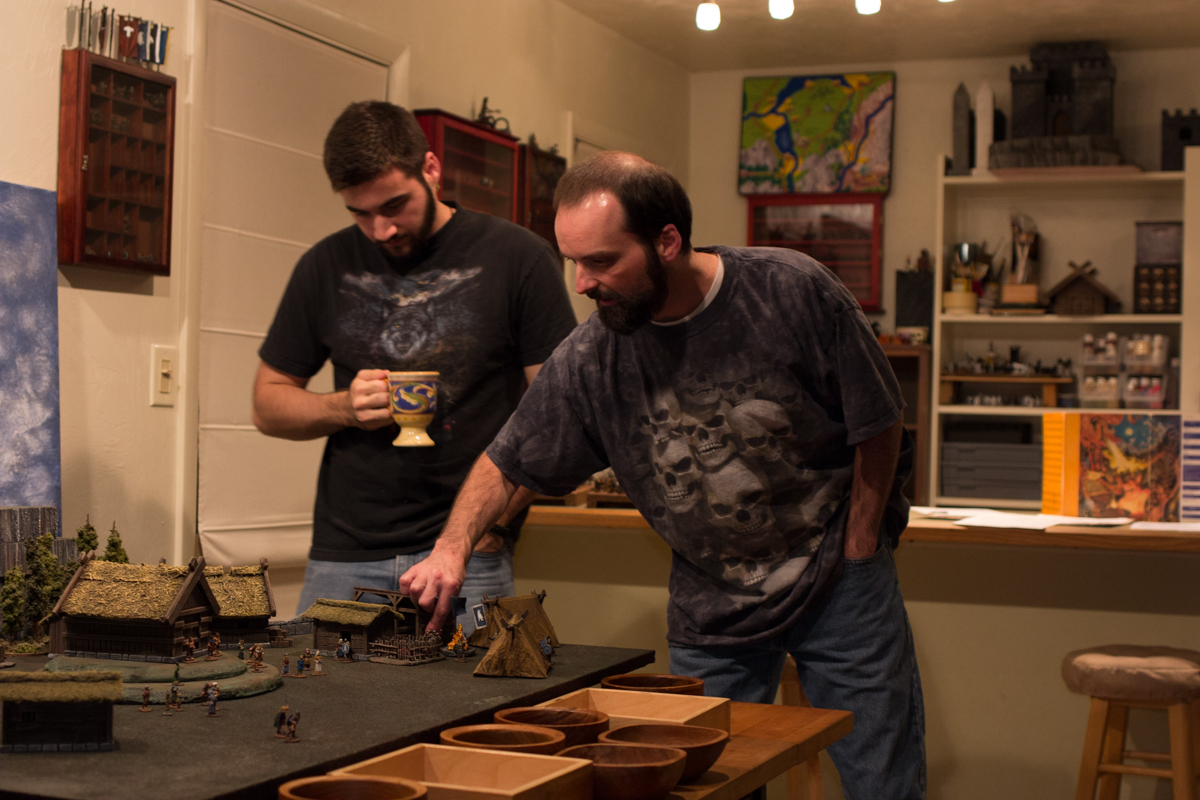 Hegg and his thanes claimed the longhouse, while the infantry were encamped by the animal pens.

As Hegg climbed the hill to the house, Aedelfrid got a long look at the hilt of his sword. It was just as her brother Thorgils had described their father’s heirloom sword, when Thorgils saw it on the belt of Hegg’s brother Kvig Melgarson a few years ago.

The exquisite sword was stolen from her father Ardgar, shortly before his death. Thorgils had told her Father’s replacement sword broke in battle with the orcs, then the orcs struck him down. Thorgils had blamed the Melgarsons for Father’s death ever since he saw the sword on Kvig’s hip. He would be intrigued to hear it was Jarl Hegg, and not King Kvig who wore Father’s warsword now (SGK #42). 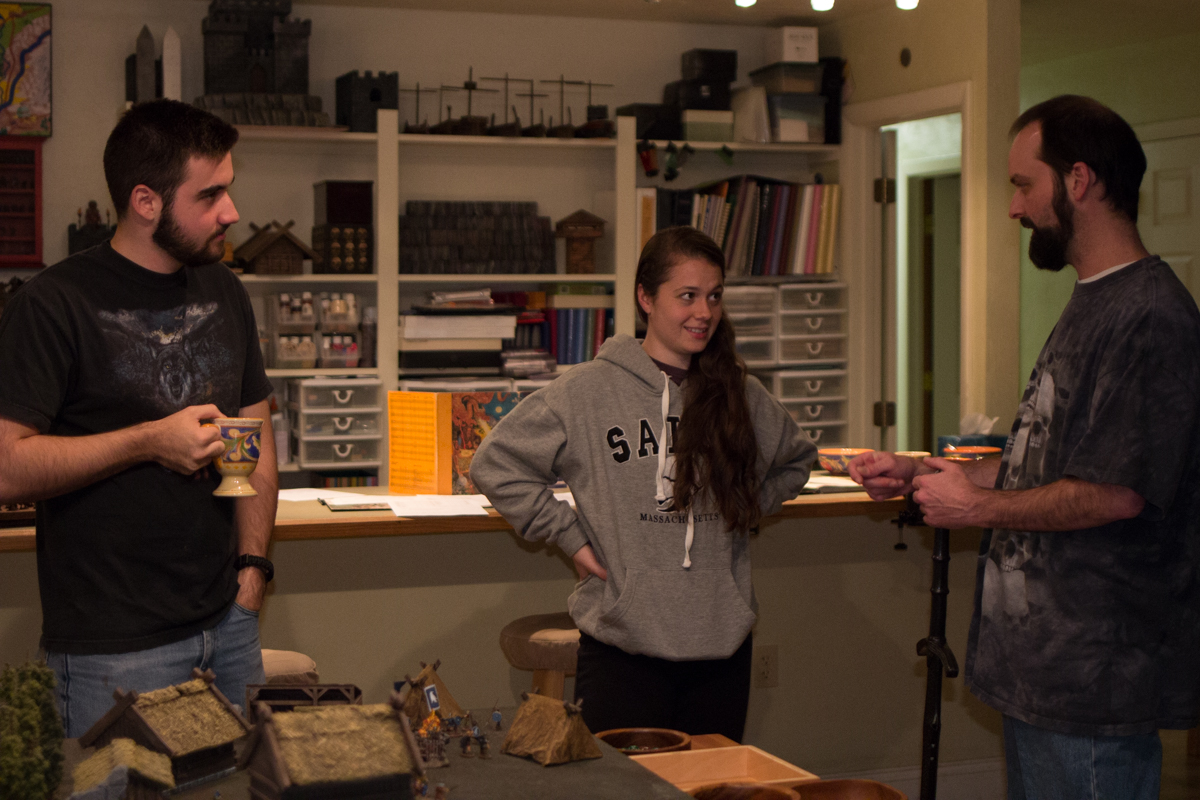 Aedelfrid was nearly overcome with the desire to steal back her family’s heirloom sword from Jarl Hegg.

After she saw Ottar Gudmarson and the other wounded to beds, Aedelfrid sent her followers to enjoy the celebrations. 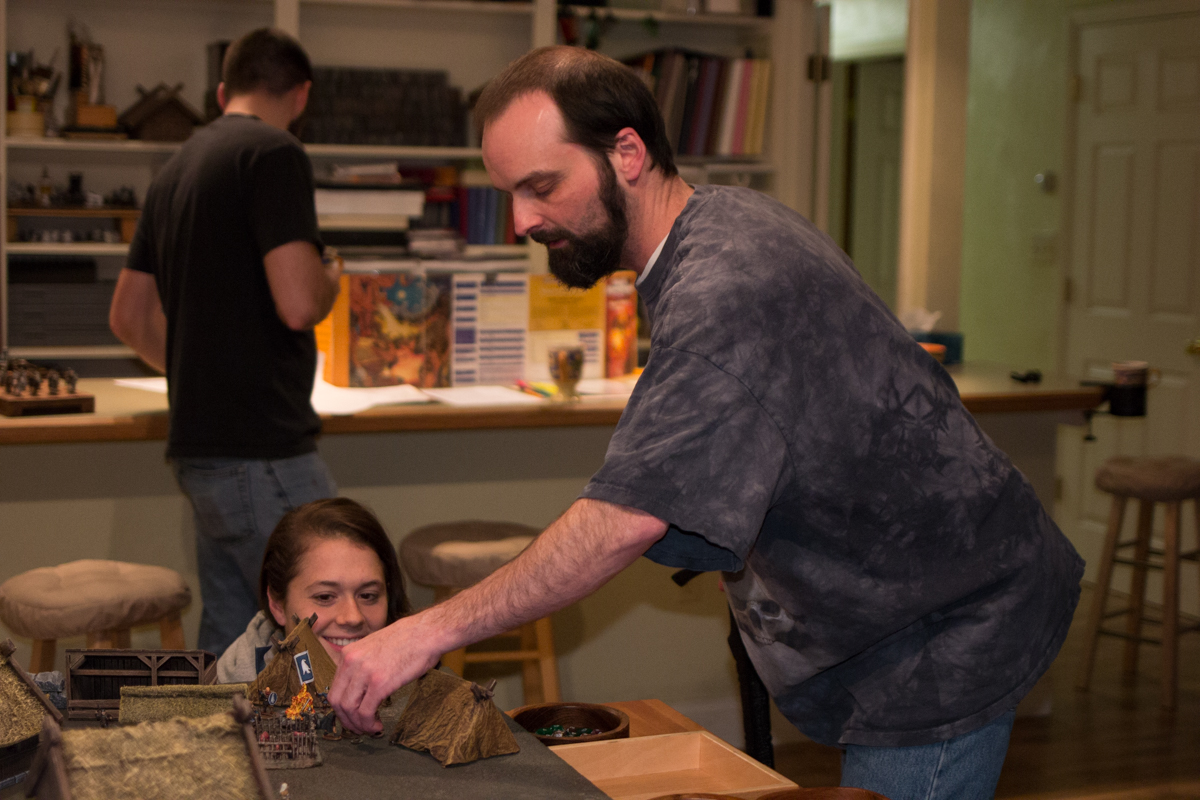 Aedelfrid decided to join the warriors from Timlin feasting around their bonfire.

A strapping man from the group welcomed her to their circle. He introduced himself as Henrik Modrak, longtime fighter for the Melgarsons. 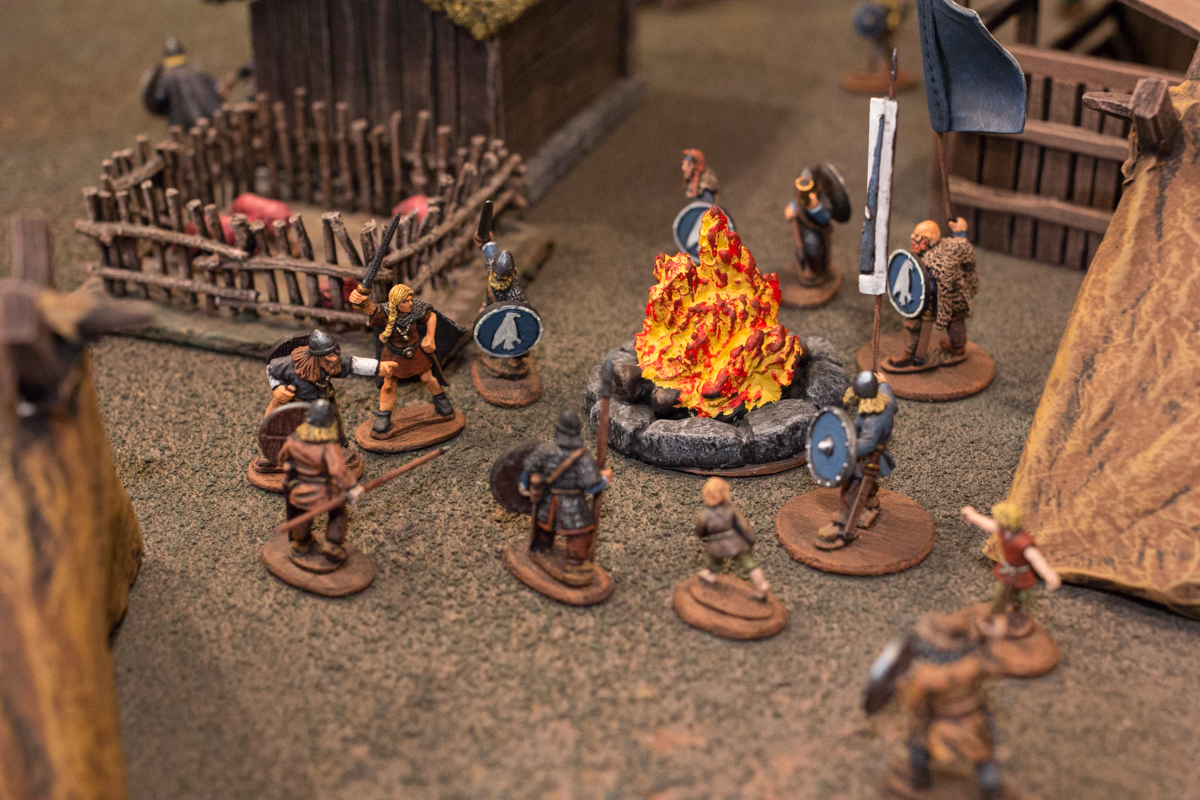 The Melgarsons’ legendary infantry boasted of their many victories.

The storytelling was interrupted by a drunken, shouting Hegg. The Jarl wanted all present to hear what the prisoners had revealed. A beaten captive was dragged up the longhouse hill. There he told of an agreement between Jarl Gudmar and their leader, the robber Baron Harolf of Aigist Hold. Hegg was furious Gudmar would encourage the bandits in Hegg’s lands, and called for Ottar to come forth and fight for his father’s honor.

Melkor stepped before the powerful figure of Jarl Hegg. “Jarl Hegg, we came in good faith, and had no knowledge of this secret pact. This is no matter for single combat to decide. Take these prisoners before the king, and let King Magnus listen to their words.”

Hegg swayed on his feet and tried to look Melkor in the eye. “Bah! There wouldn’t be any honor in smashing your upstart Gudmarson, hurt as he is. Magnus will hear of this deception by his father. The prisoners will march with me tomorrow.”

“But Jarl Hegg,” pleaded Sverting, “the bandits’ brothers are sure to retaliate! We need your protection!”

“You have the mighty Ottar Gudmarson to fight for you!” replied Hegg. “I leave tomorrow.” Hegg stormed back into the longhouse.

True to his word, the next morning Jarl Hegg took the prisoners and his troops and went on his way to join King Magnus.

And as predicted by Sverting, the next night, wolf-skin clad warriors attacked the village of Rathus with a vengeance.

Aedelfrid, Melkor and the cavalry were prepared. 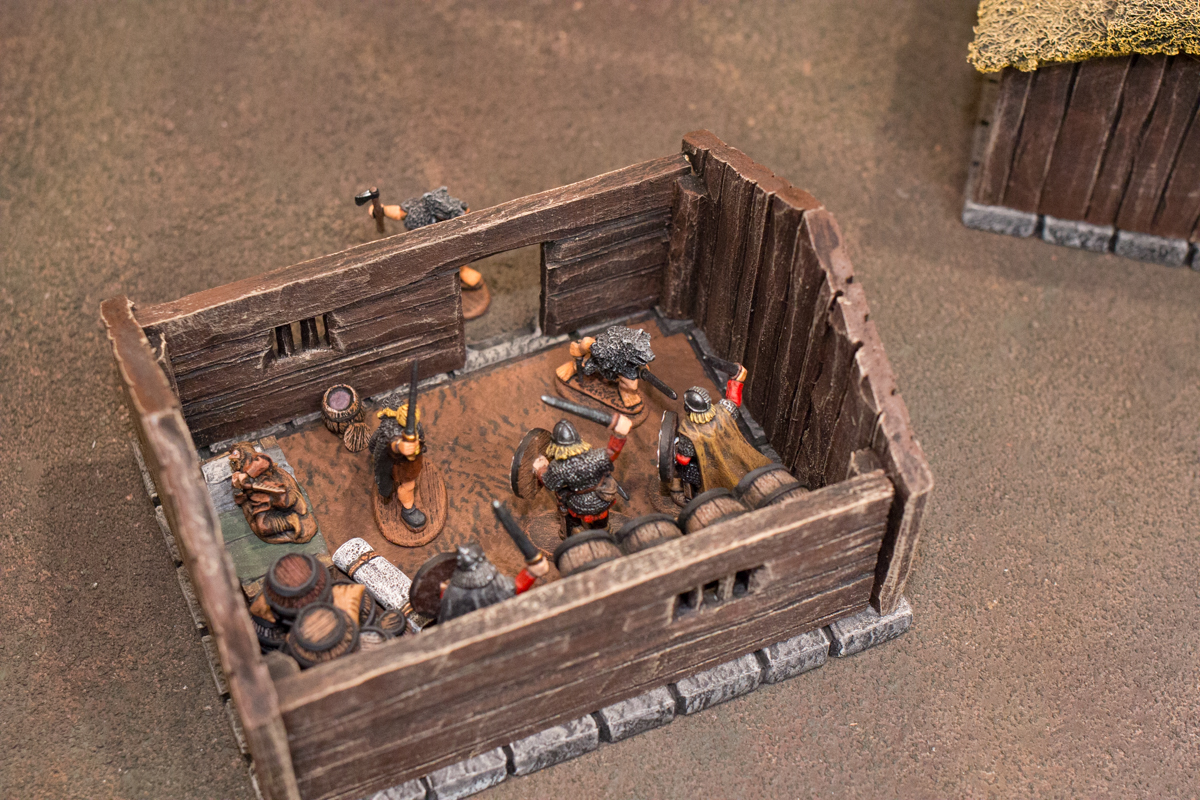 Aedelfrid stood guard over Ottar while his shield-brothers fought the bandits.

It was a vicious battle in the near-dark. 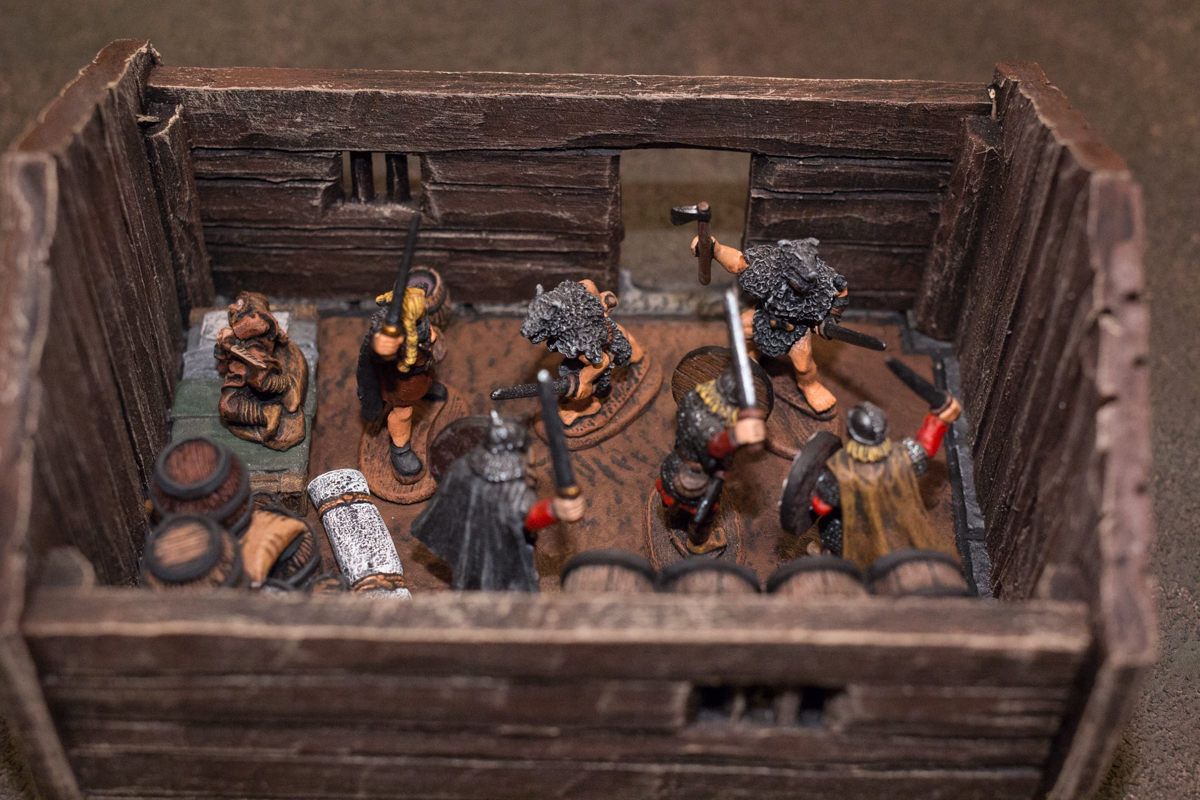 Aedelfrid found her shortsword perfect for fighting in the cramped cabin.

However, she couldn’t flank these wild men. 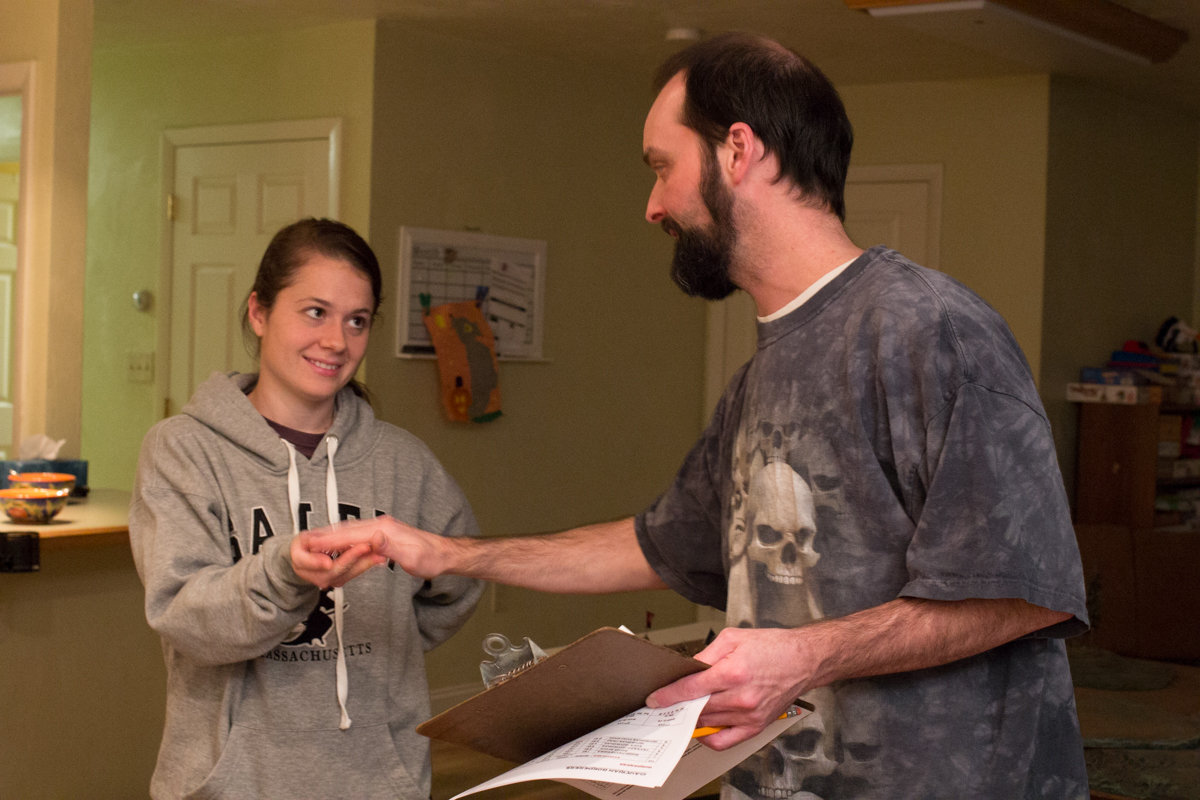 Melkor and his shield-brothers had more success and were able to slay the ulfhednar inside and win through the door into the night. 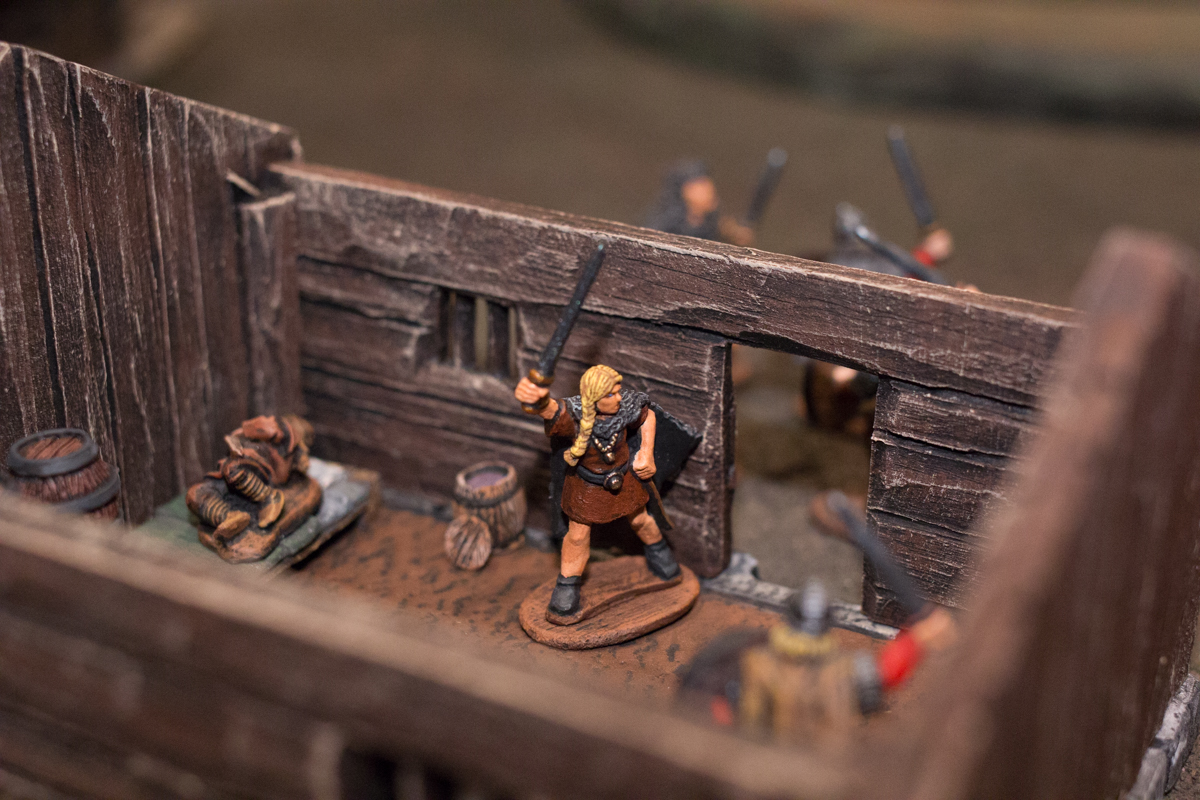 The fight raged outside the door, leaving Aedelfrid stuck in the cabin.

A horn blast sounded from the village. 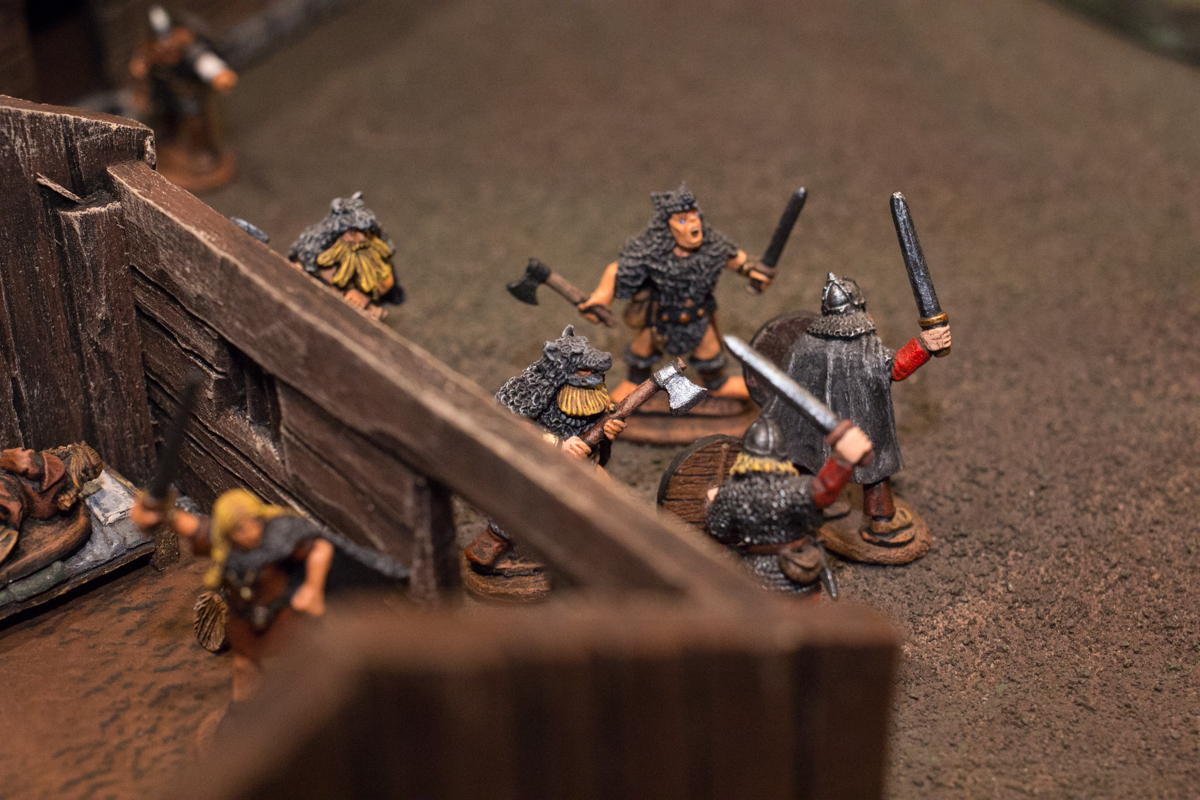 The men of Var began to charge out of their quarters.

With her men of Var on the way, and Melkor in control of the door, Aedelfrid felt Ottar would be secure in their cabin. Her sneaky impulses served her well as she spied a cracked bar in the back window. 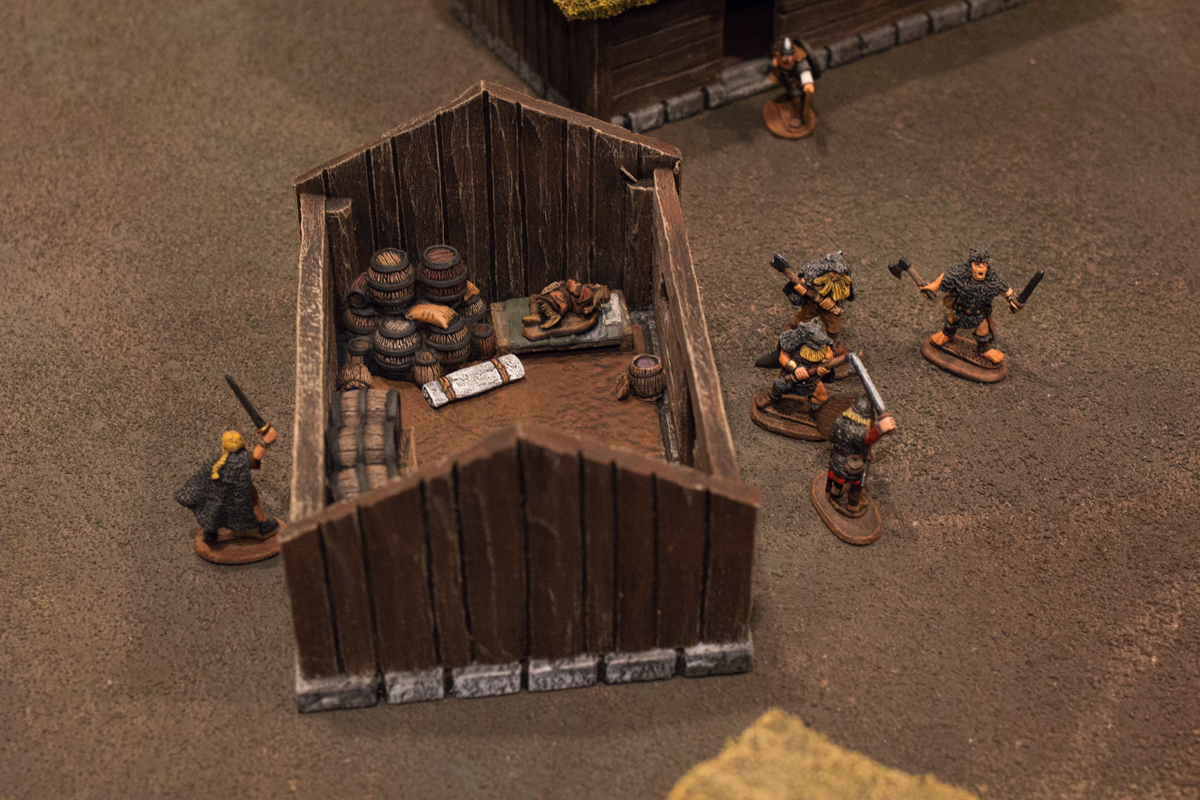 Aedelfrid slipped out the window and crept behind the ulfhednar.

Melkor downed another wolf bandit, leaving only one in front of him. The men of Var were engaged with the other ulfhednar. 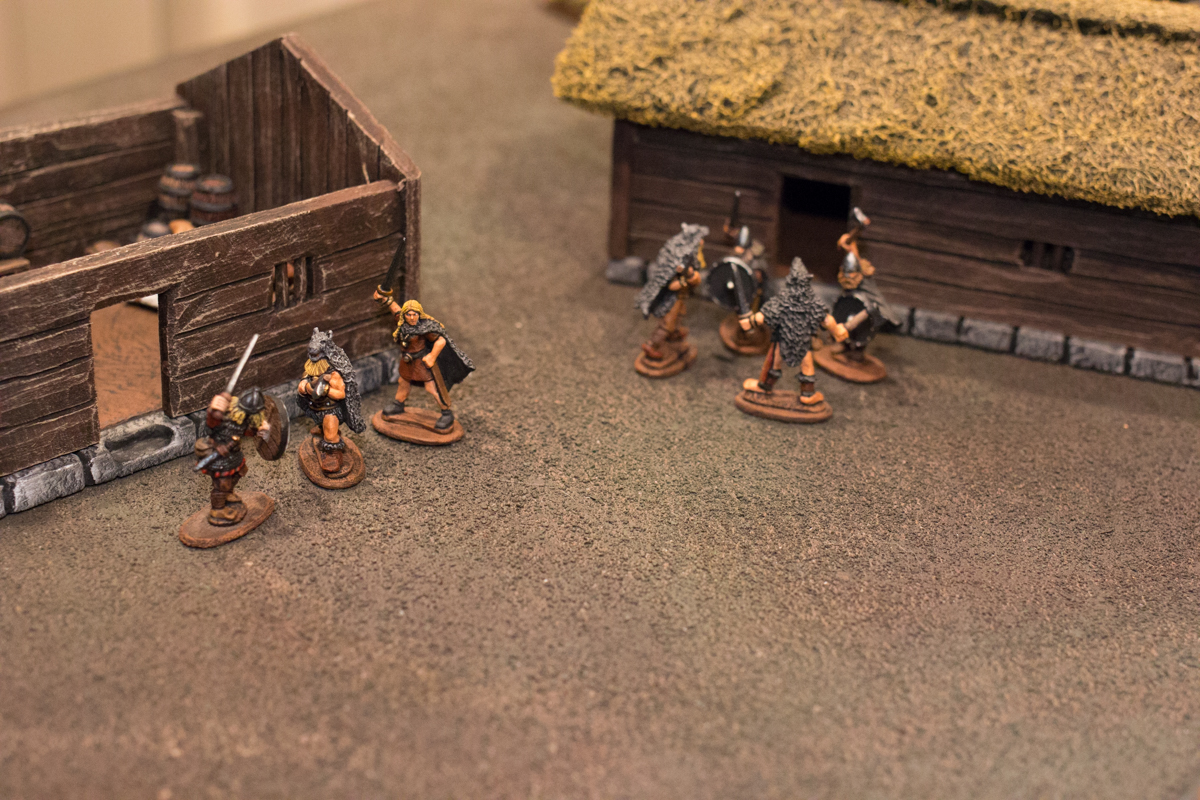 A fierce backstab from Aedelfrid helped to slay the ulfhednar fighting Melkor.

When Melkor and Aedelfrid brought down that bandit, the rest of the ulfhednar howled and retreated.

Melkor and Aedelfrid charged the other warriors to check the village, while they remained on guard over Ottar for the night. 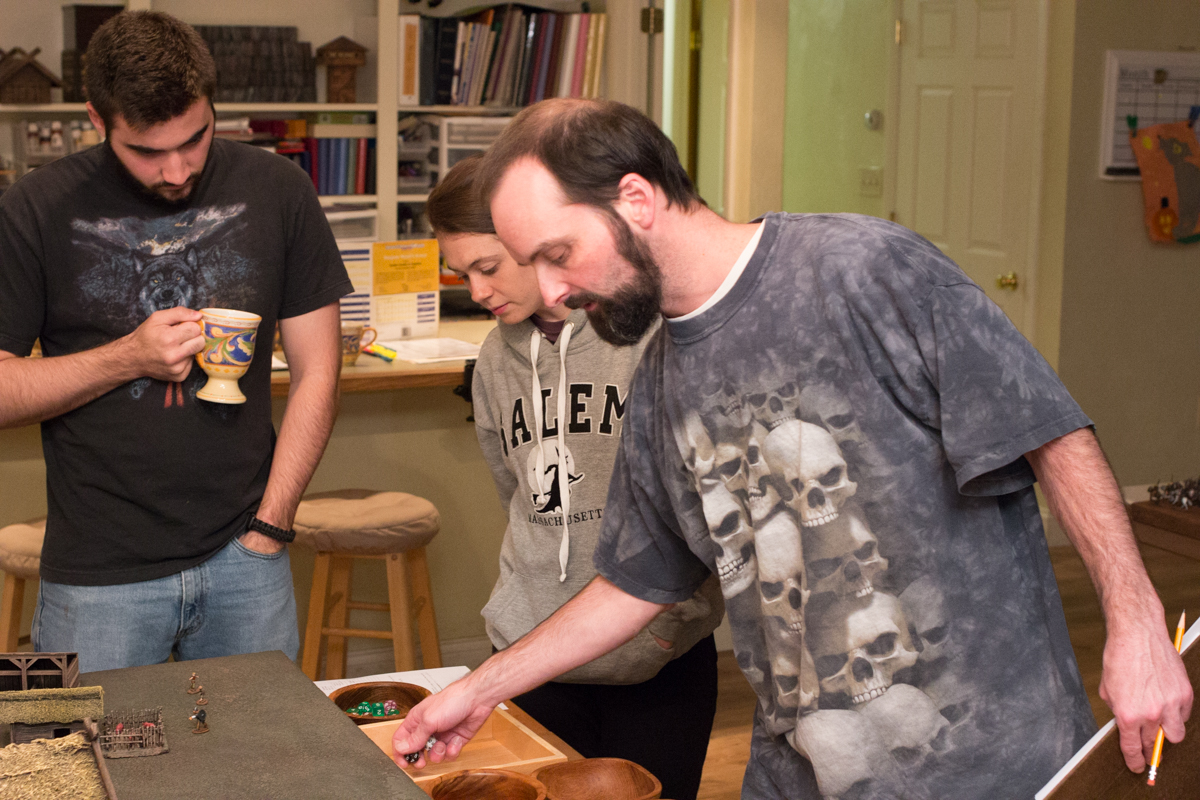 Would the bandits return for more mayhem? Would Jarl Hegg’s petition to the King bring trouble for Melkor and Aedelfrid? Time will tell…