Kvig Melgarson campaigned against orcs for many years (Sagas of the Gautrian Kings #37-48) to protect the humans of Gautria. Nominally under the banner of King Magnus in South Gautria, he vanquished the mighty urog King Valden the Ruthless at the Battle of Skarken River (sgk 40). Kvig was held in high esteem for his willingness to take the field against that massive orc army when King Magnus had argued they had little chance of victory (sgk 39). After that decisive battle, the bonders held a Thing (sgk 41) and declared Jarl Kvig should be their king. King Magnus heard about the Thing and declared Kvig an outlaw (sgk 42).

Kvig eventually fled South Gautria (sgk 45) with some loyal men, and brought his orc-slaying followers north. The League of Nil-ith Horn had sent invading forces of orcs and men (day-long wargaming event, “Kingdom Under Siege”) across Kisilev Lake to ravage Kvig’s homeland. Kvig returned to his ancestral home fort of Helvik (sgk 46) to find his brother Olaf unwilling to commit any of his troops to an offensive maneuver without the support of King Magnus and his armies. When the ill (and rumored to be bewitched) Olaf died in Kvig’s arms, Kvig pronounced himself Jarl of Helvik.

Once news of Kvig’s action reached the recently widowed (“Battle of Turlin”) Queen Svala of North Gautria, she sent a token unit of men to Kvig, in the hopes of an alliance. With the League of Nil-ith Horn troops to his east, King Magnus to his south, and Queen Svala on his west, Kvig’s chance to unite Gautria under one ruler was upon him. 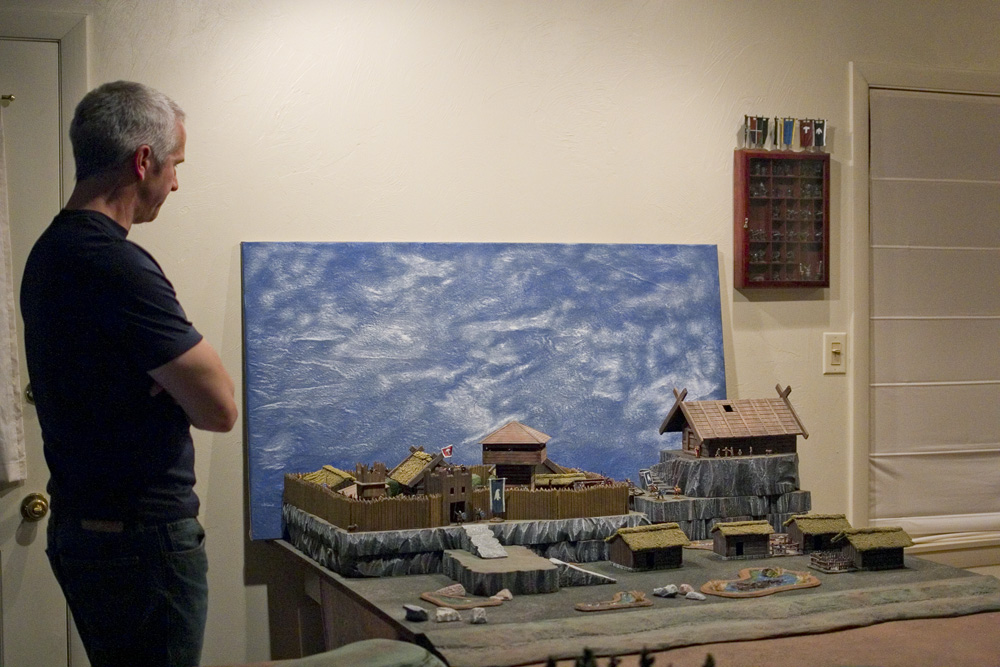 When scouts returned to Helvik with reports of several units of League of Nil-ith Horn infantry coming from Larbro, Kvig and his champion Bleddyn readied their men for a siege. 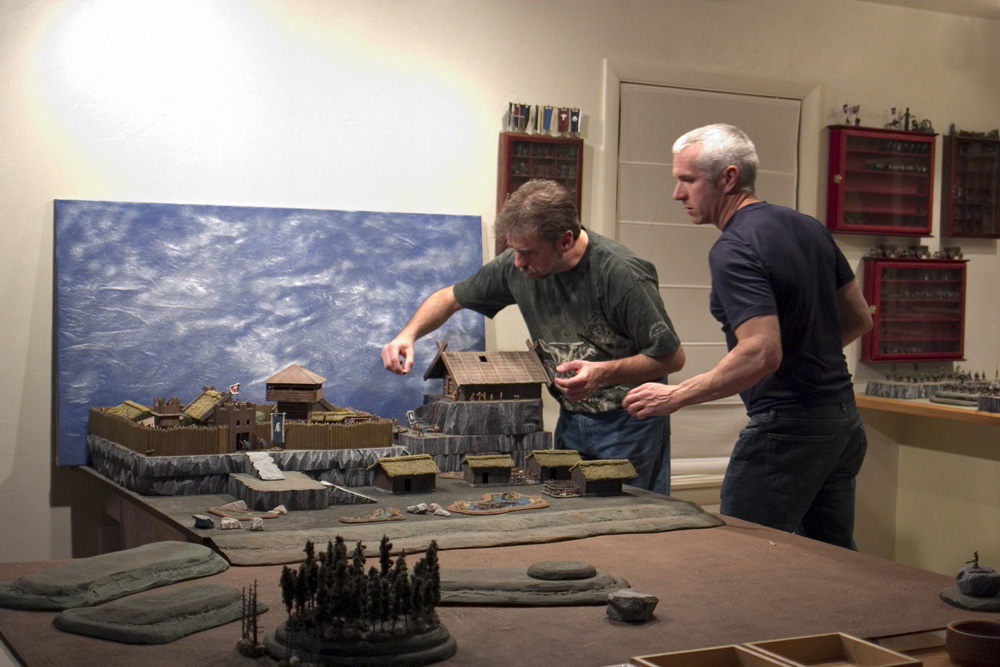 The inhabitants of Helvik were inspired by their new Jarl’s confidence. The soldiers and bonders steeled themselves at their posts when the League of Nil-ith Horn army arrived. Unit after unit lined up for battle.

The League forces were led by Graf Shalmenasar, a black-robed priest. He dispatched a messenger to the Gautrians. Instead of listening to his terms, Kvig challenged their 3 largest urogs to fight Bleddyn, Wynston and himself. 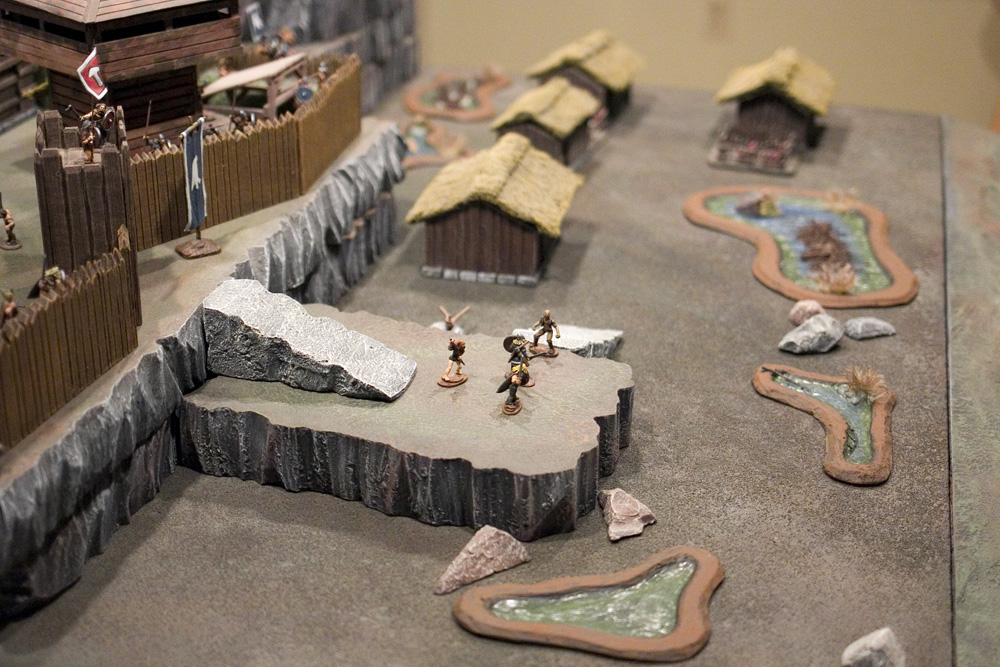 Graf Shalmanesar agreed at first, but as the trio fought, he decried Wynston’s slippery tactics as trickery. He responded in kind with a blast from his mage’s staff. The humans retreated inside the pallisade, flames and lightning bolts slamming into the wooden gate behind them.

Kvig’s people were prepared and quick to react to the flaming front gate. Graf Shalmanesar then flung his fire magicks at the bridge leading to the great hall where the women and children were sheltered. Wynston jumped across the gap to defend the hall side while men worked to put out the fire.

The League of Nil-ith Horn forces waited patiently, satisfied to let their priest and leader burn a way into the fort. The men inside the wooden palisade felt their situation grow more desperate. It seemed a matter of time until the orcs destroyed the front gate.

Just then, a horn sounded in the distance. It was a Gautrian horn! King Magnus had arrived from South Gautria with his professional army. The hearts of Helvik were buoyed as Graf Shalmanesar ordered his forces to retreat.

The League of Nil-ith Horn army withdrew east, and King Magnus arrayed his troops outside Helvik. Kvig rode out to parlay with Bleddyn by his side, and his heavy cavalry and the ulfhednar behind him.

King Magnus had his new bride Inga Storolfdottir with him. Inga’s father Storolf was one of Kvig’s most powerful allies. Inga herself had taken a liking to the handsome champion Bleddyn when she first saw him in her father’s village, and heard the tales of his prowess in battle. Now a married sword sister, she still gave Bleddyn a lingering look as the pairs came together.

Magnus addressed Bleddyn, “I demand the surrender of this bandit Kvig Melgarson who calls himself lies like king and Valden-slayer! I bring the men for a united Gautria. I bring the true heroes of Skarken River, Bolverk Skalason, who struck down Valden, and Baron Vulmar, whose cavalry carried that day. With men like these fighting under me, I will go to Larbro, destroy the orc threat to the people of one Gautria!”

Kvig answered forcefully, “I have led our men into battle with the orcs while you sought to stay safe and protected. The people of Gautria need a king of action and strength. Go back to your stone keep and hide boy, I will take these warriors to Larbro and crush the orcs on our shore!”

“It will take both our forces,” spoke Inga. “We must unite in this, or the whole of Gautria will fall! Save your anger towards each other for when the orcs are gone.”

King Magnus looked shrewdly at his wife, then at his units of men behind her. “I will call a Thing, two nights hence. We will hear what these people of Gautria think. They will proclaim me rightful King, then I will lead the attack on Larbro. You and I will settle after, Melgarson.”

Magnus wheeled his horse away and returned to his forces. Inga sent a last smoldering glance to Bleddyn and followed her husband.

The South Gautrian army set up camp just within sight of the palisade of Helvik. Kvig took counsel with Bleddyn and Wynston. “Send some of your men to your father, Ragnar Red-Blade. Ask for his aid against these orcs,” Kvig said to Bleddyn. “And stay out of Inga’s tent.”

Kvig hoped his ally the King of the Vell savages to their north would come swiftly. Ragnar’s presence would give Kvig’s claim to kingship more weight. Any additional fighters would be welcomed against the well-armored and highly disciplined League of Nil-ith Horn troops. But it was the common bonders who had first declared Kvig as their King. Would they come to this Thing, with King Magnus and his professional army poised to tip the balance of power? Would the bonders make their voices heard again for the man who kept the lands free from the orc terror?