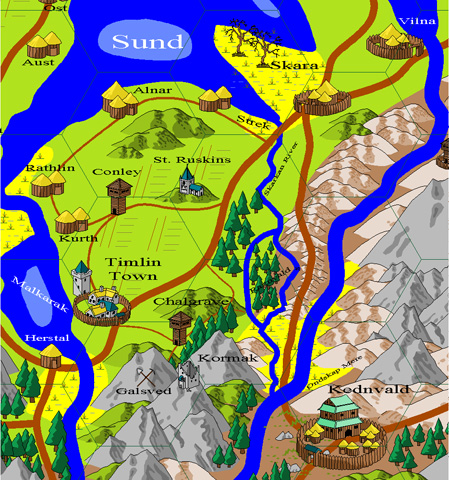 The urog king, Valden the Ruthless, marched his massive army north on Kednvald Road, intent on destroying the human outpost at Skara and claiming the northern peninsula for the Vangen Orc Kingdom. Kvig Melgarson and his retinue harried the western flank of the orc army to keep the orcs from the Gautrian lands west of Skarken River, but had too few forces to inflict serious damage. Kvig, Wynston and Bleddyn decided they had to cut the flow of relief forces and supplies from Kednvald to effectively stop Valden. The surest way to accomplish that was to destroy Kednvald Bridge.

Kvig took his companions, and a small group of Ulfhednar who were fleet of foot, and raced south. They traveled with little rest and no extra gear, save for one barrel of cinder sand. Their journey was briefly slowed in the swamp of Ondskap Mere (which the Great Northern Orcs called Sharog Mokal) where Wynston succumbed to the putrid air. There were several volunteers to carry her, and she was mobile by the time they reached Kednvald Bridge. 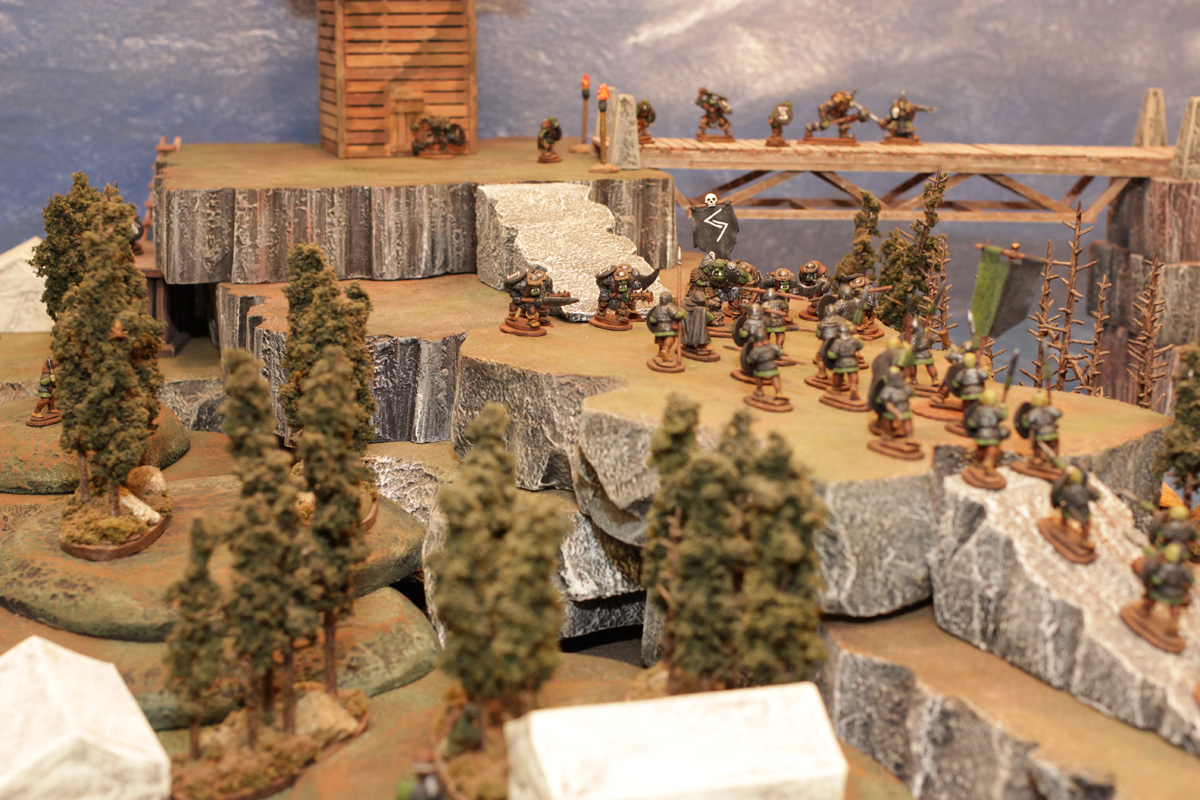 The weather was foul and damp, and they encountered no orc patrols until the scouts at the bridge. Wynston and Bleddyn silently eliminated them, and spied through the gloom across the river. On the other side of the ravine was a column of League of Nil-ith Horn orcs. They were held from crossing by the Vangen urog in command of the bridge. 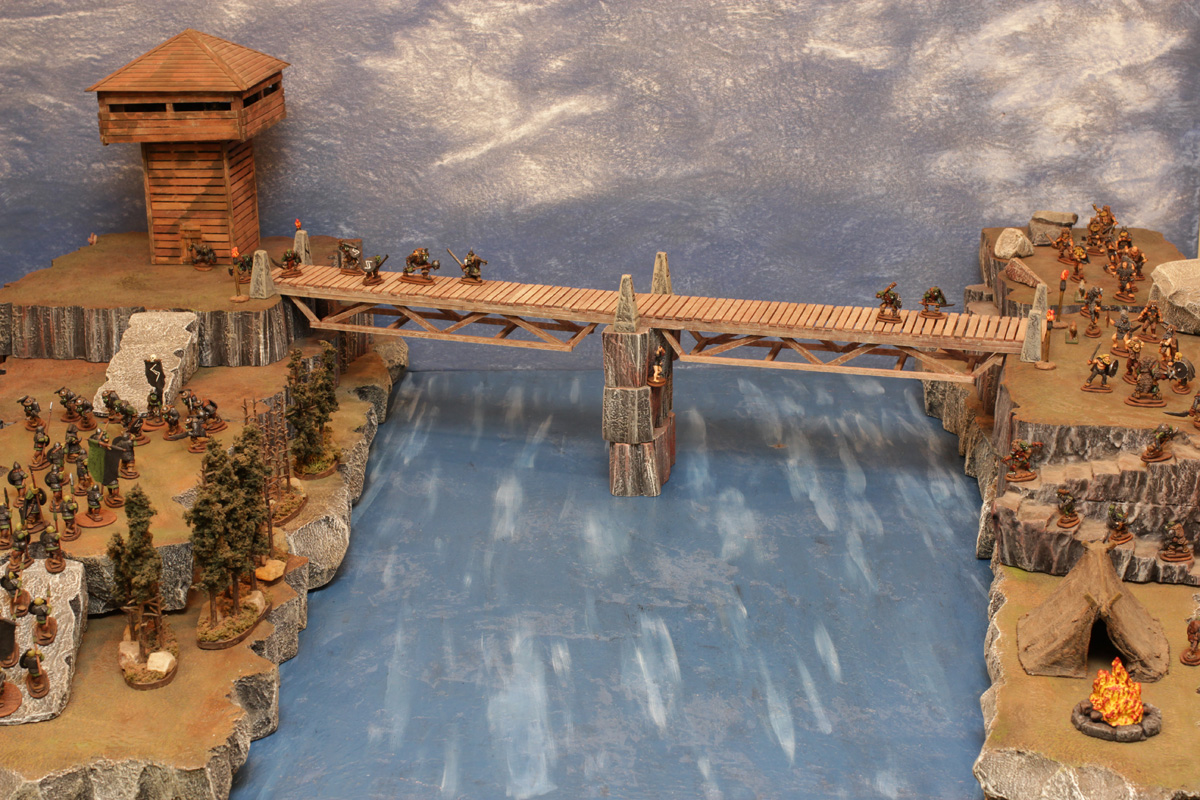 Kvig took advantage of the disorder to strike the orc camp on his side. Wynston climbed along the cliff face and under the bridge, a cask of cinder sand tied to her back. 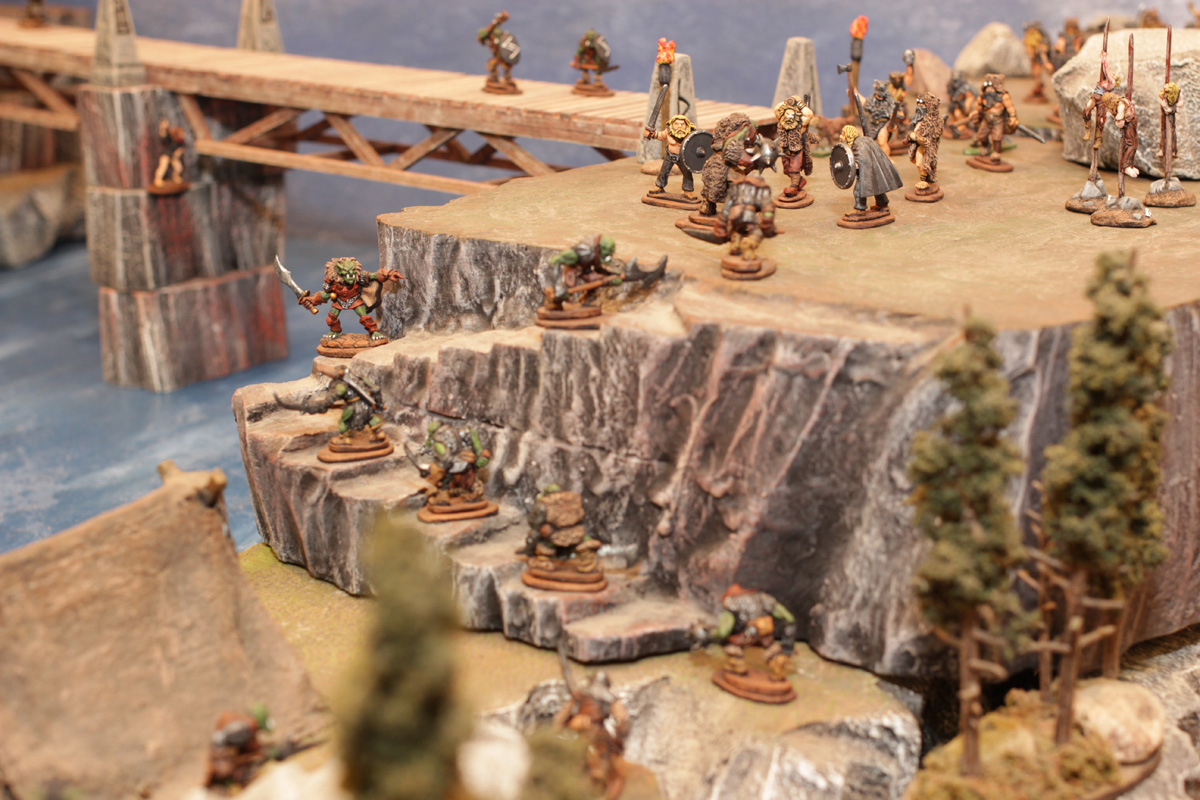 The men fought fiercely against the better armored orcs, desperate to buy Wynston time to set the bridge alight. The weather kept the fire down, and Kvig’s forces took casualties. 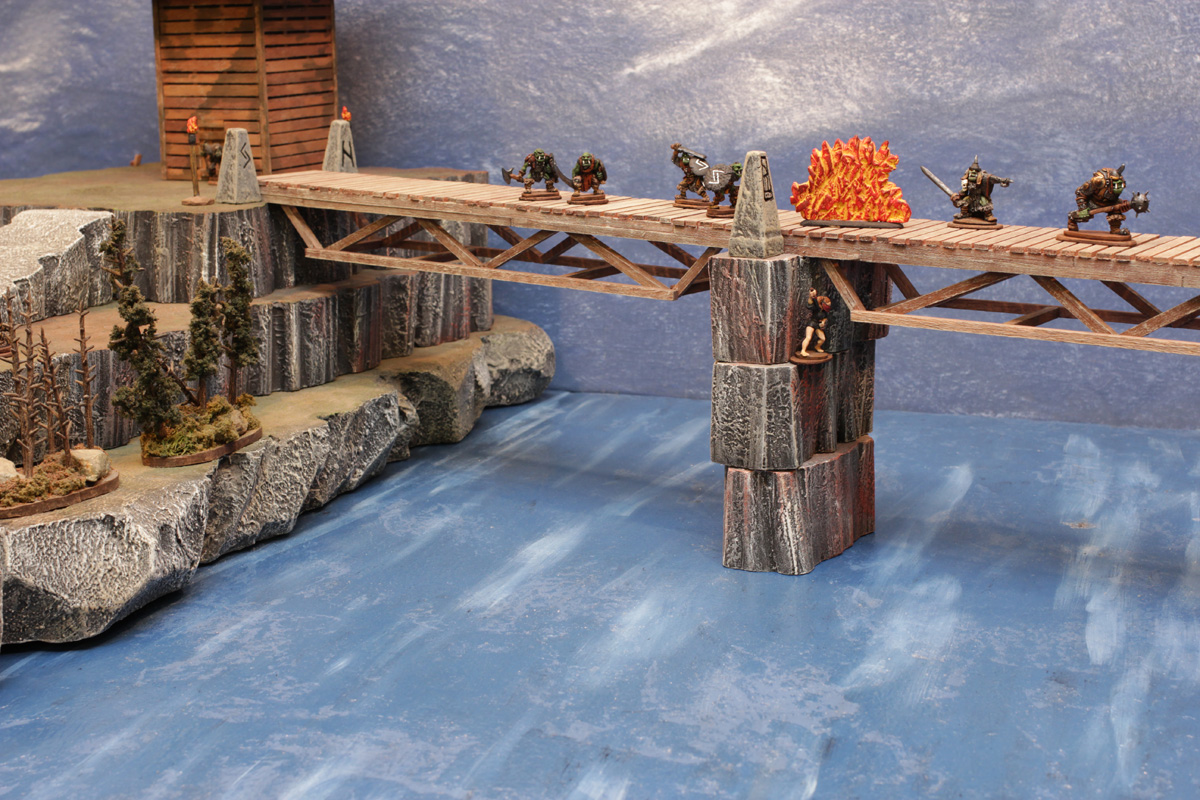 The wooden planks caught at last, but the flames did not keep back the more psychotic warriors. 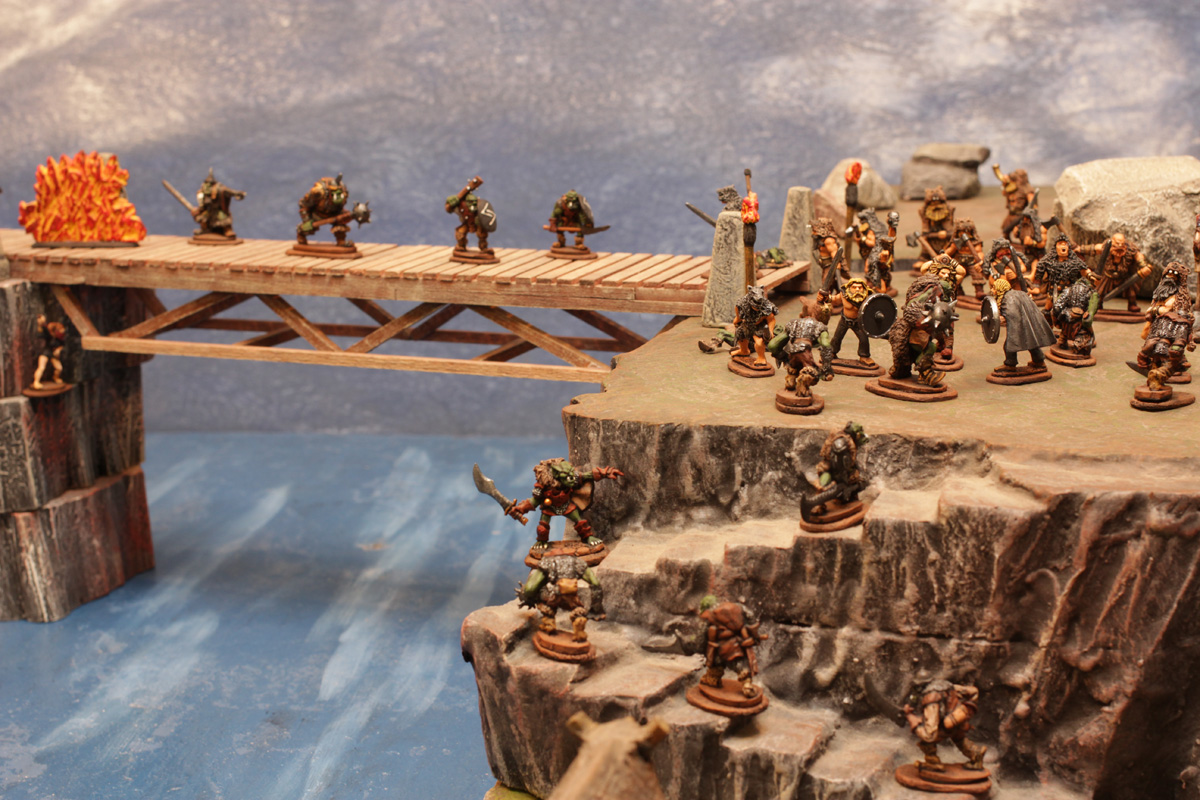 The cinder sand was burning steadily now. Unfortunately, the fire gave off good light for the orc captain to spot Wynston. Unable to avoid his reach and escape the burning bridge underneath, Wynston vaulted to meet him. 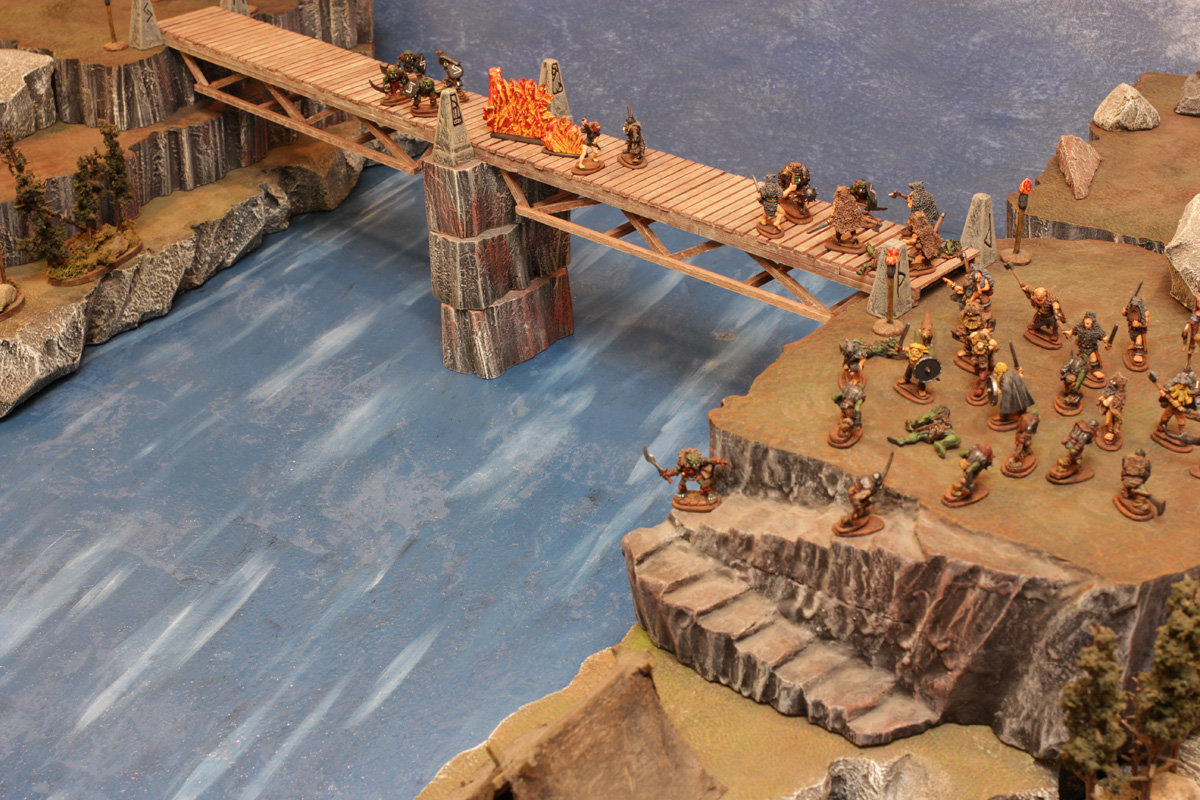 A misstep by the orc captain and a timely lunge by Wynston sent the orc plunging into the waters.  The bridge was in full flame as Wynston sprinted across to rejoin Kvig, Bleddyn and the Ulfhednar.  As the bridge fell into the chasm, the humans broke combat with the orcs and ran for the swamp road. The embattled orcs let the humans retreat into the night.

next: Sagas of the Gautrian Kings #38- Skara Will Burn>>