Eskander Toshe was sent on his first command by the League of Nil-ith Horn to re-establish control of their road to Rostok Hold. His caravan of troops and supplies was harried relentlessly by savage humans as they traveled north from the fortress of Kisevald to the wooden outpost of Rostok. 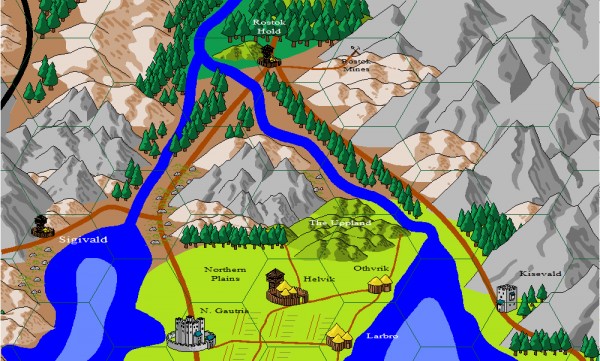 His elite orc captain, Gazzi-Ura, fended off the attacks with proficiency and the party at last reached Rostok Hold. 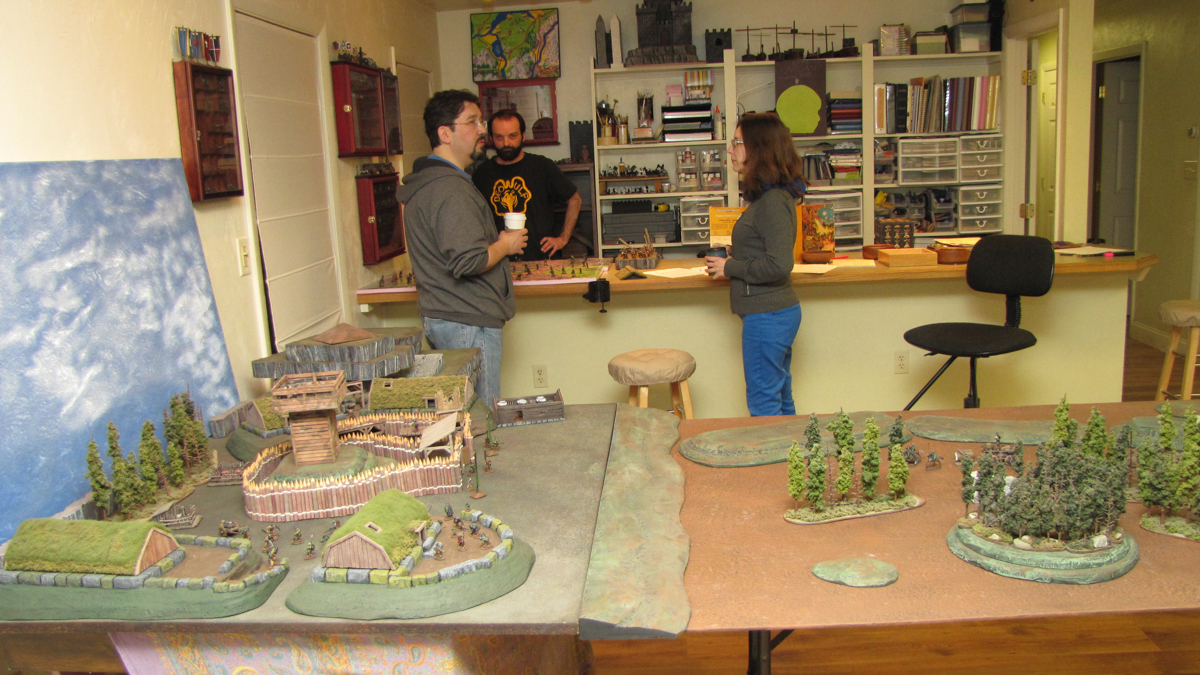 They were rudely greeted by Snog, the orc second-in-command.

“Boyar Thonkrik’s up above.” he said. Gazzi-Ura tried to follow Eskander into the tower. Snog shoved him. “The Boyar doesn’t need to see you, orc.”

“I go where Eskander goes,” responded Gazzi, and placed his hand on his sword.

Snog eyed the newcomer coldly. “Fine,” he said. “Thonkirk’ll set you straight. Then I’ll be here when you come down.”

Eskander and Gazzi entered the tower and climbed to the upper floor. 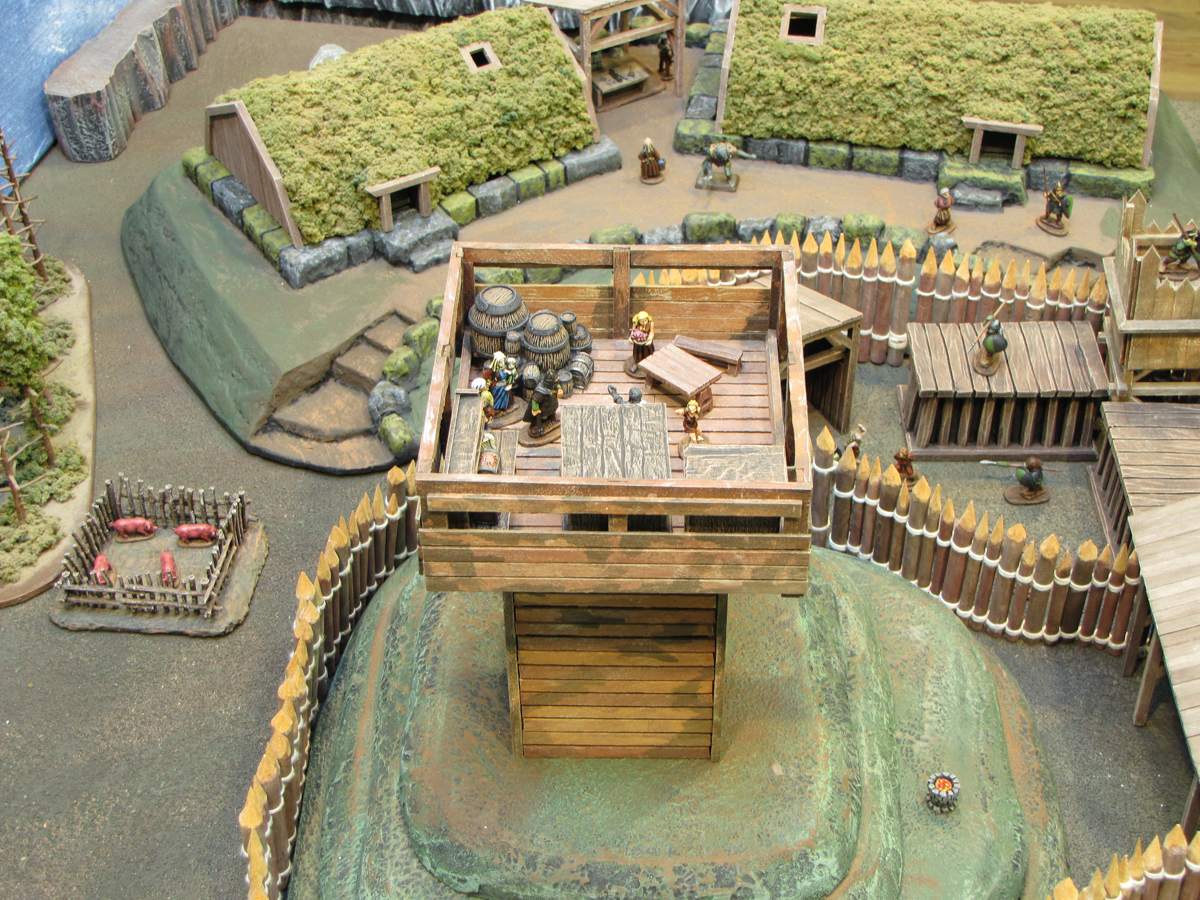 Boyar Thonkrik looked Eskander over disapprovingly. “You need to keep your orcs in line.” Thonkrik turned to Gazzi. “Get out.”

Eskander nodded to Gazzi, and the orc left.

“You’re another of Theovald’s bastards, aren’t you? Well, at least you got my troops here. Haven’t seen any relief in a long time now.”

Thonkrik went to a hutch in the corner of the room. There he opened a small chest and drew out an envelope. He tossed it on the table by Eskander.

“Your new orders, placing you here under my command. We need more men here of good calibre, Eskander. Show me yours and deal with these Drimgaard orcs. I had one of their local urog leaders in charge of working the mine. 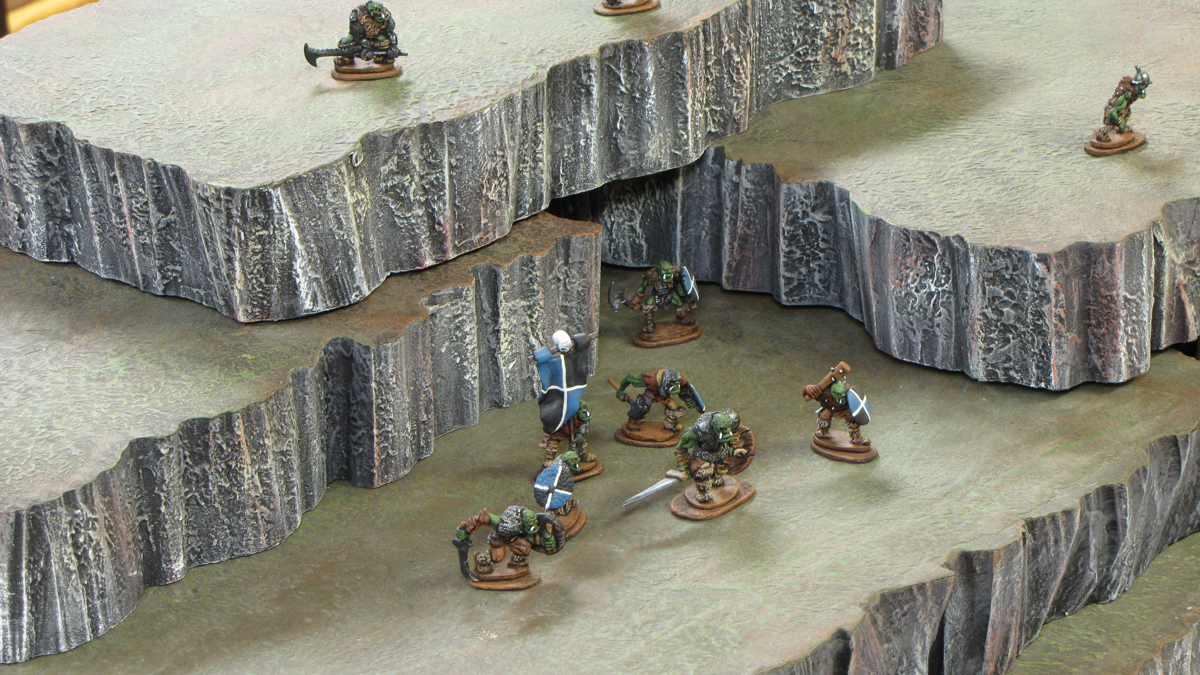 Eskander nodded and left the tower. He paused outside the palisade and surveyed the compound.

The barracks for the humans were easy to pick out. 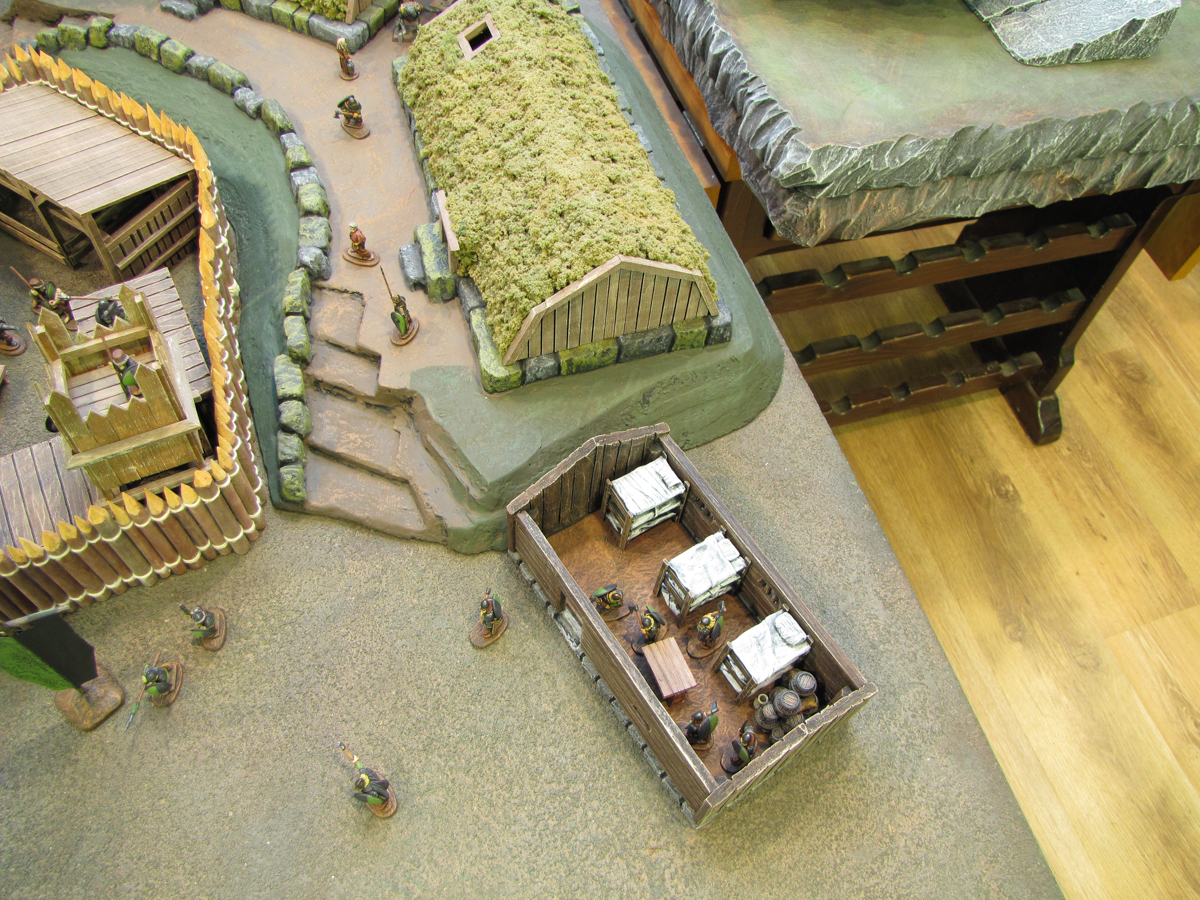 A group of Drimgaard orcs appeared from the forest. 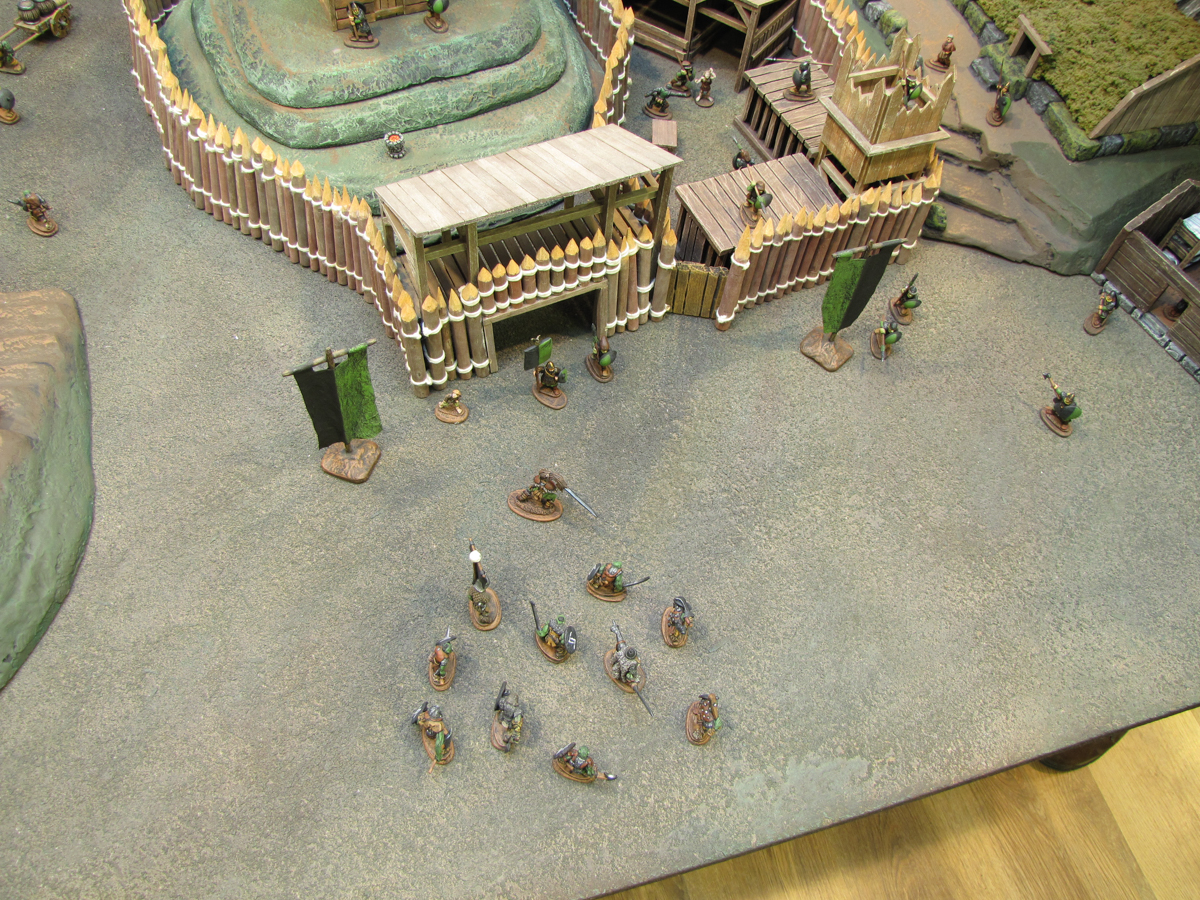 They were led by a huge female urog wearing a huge iron sword. 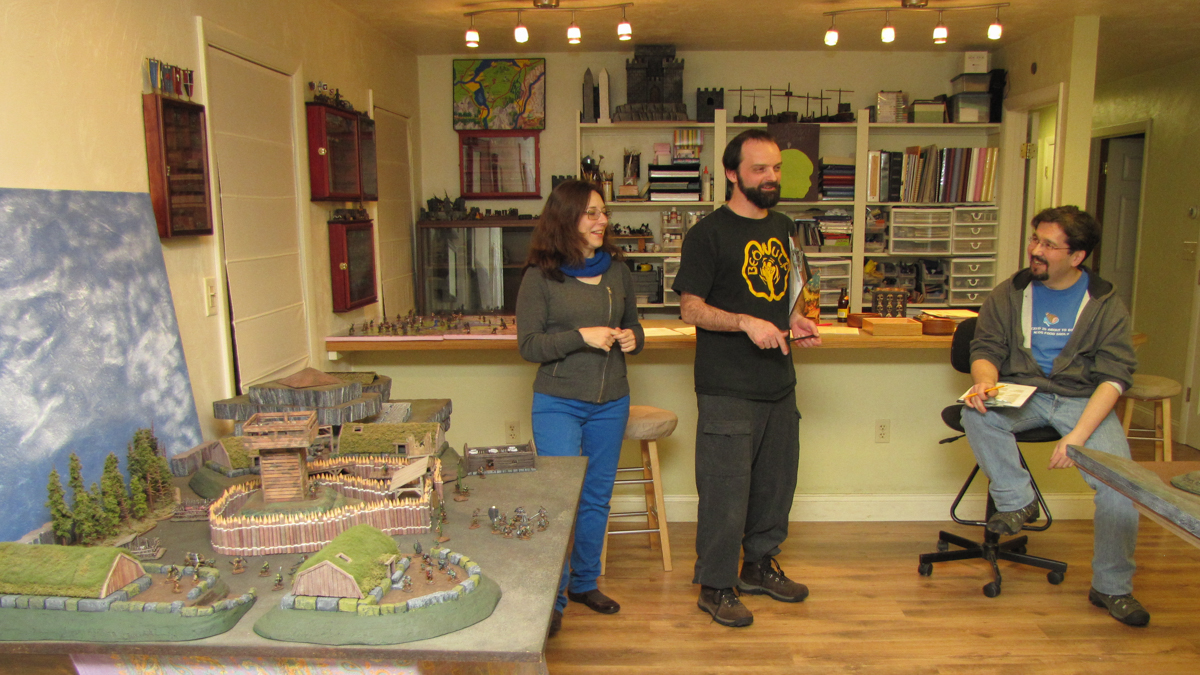 She demanded audience with the man in charge and instead was met by Eskander. Gazzi-Ura spoke the urog woman’s tongue. 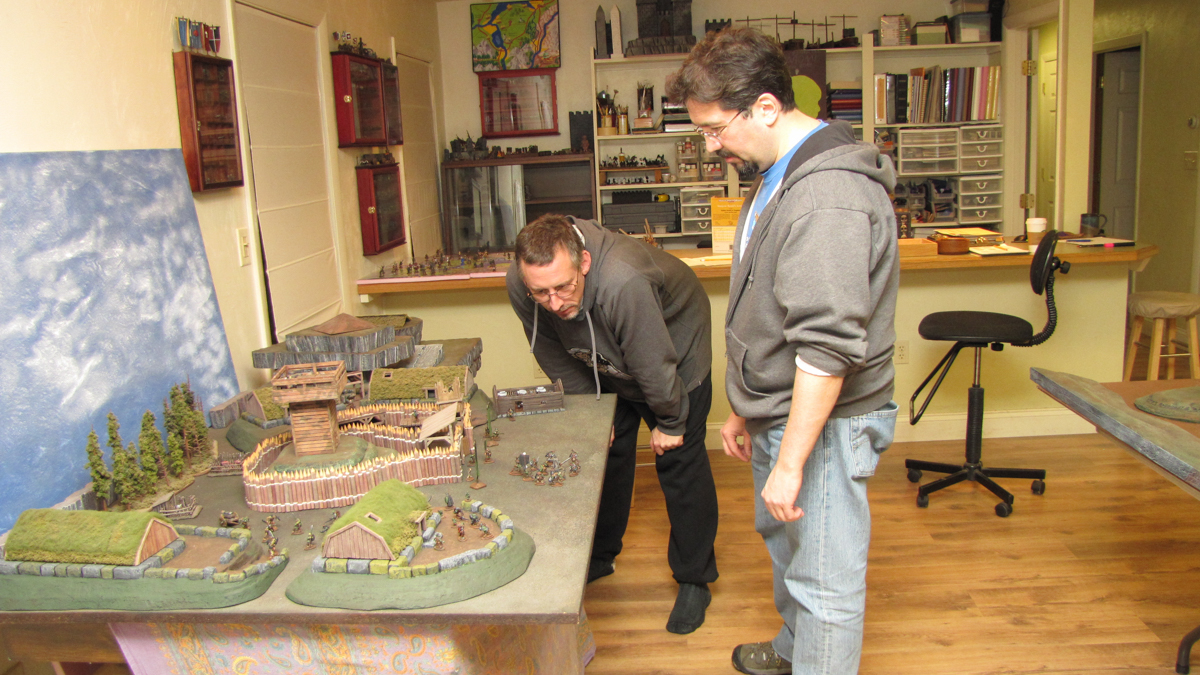 Vaak Akarya was here at Rostok on behalf of her urog king, Hertog Torkag. She pledged to lead the attack on the traitorous urog holding the mines. 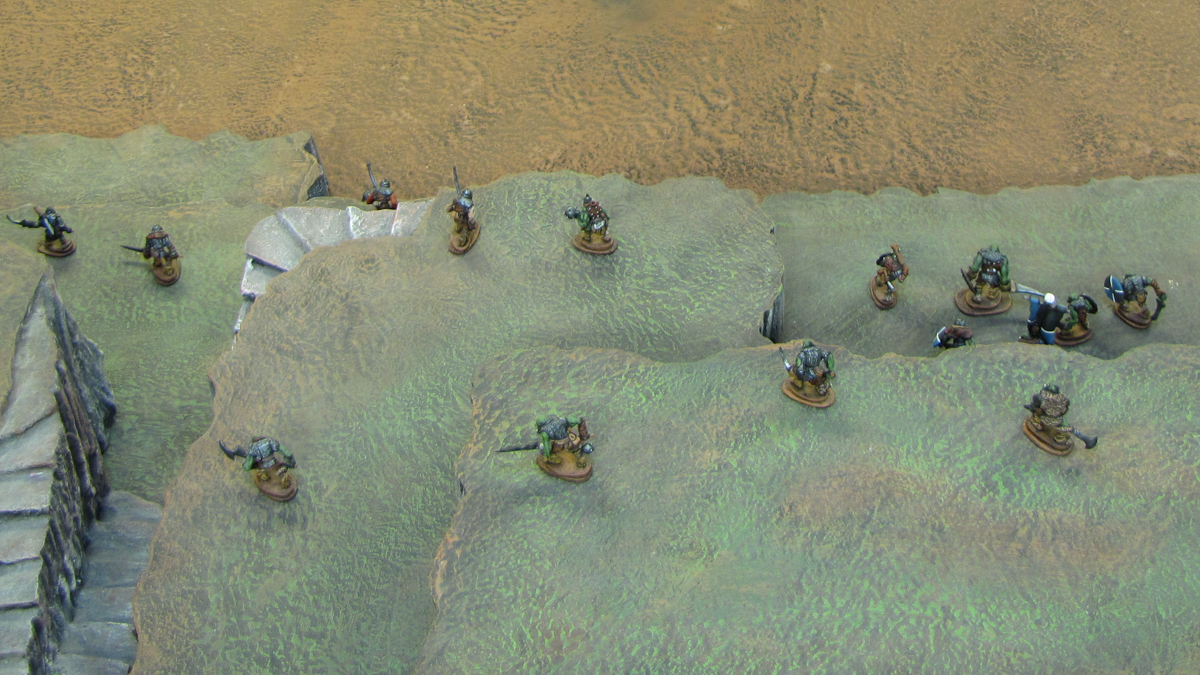 In return, she asked for lands and a two-handed steel sword made for her. Eskander agreed, and they made plans to raid Rostok mines

Later that night, once the human soldiers had turned in to their barracks, Snog found excuse to challenge Gazzi. 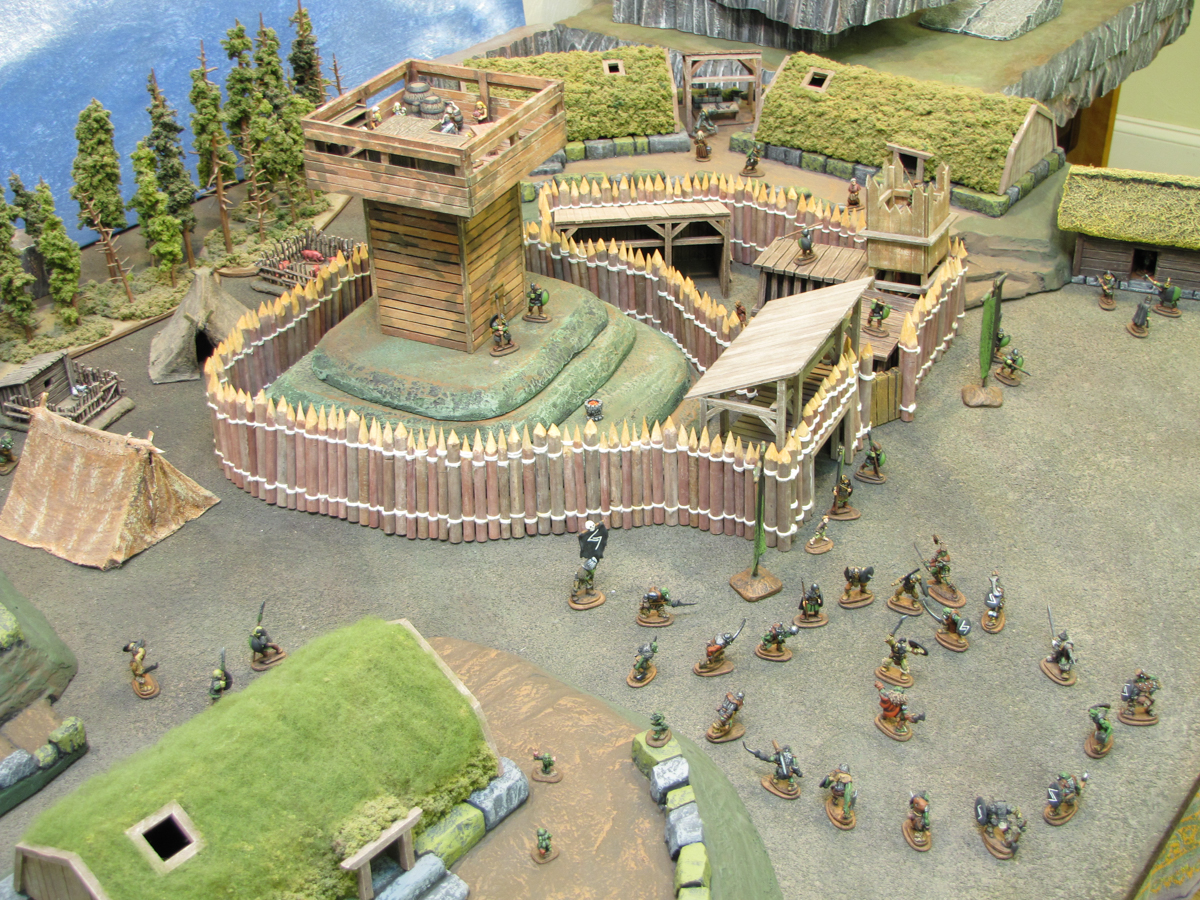 The orcs gathered round, ready for the fight, but the human guards put a quick stop to the affair.

The next day Eskander marched his units on the road for a frontal assault on the mines. But he, Gazzi, Vaak and a handful of picked orcs entered the mines from an entrance in the nearby woods. 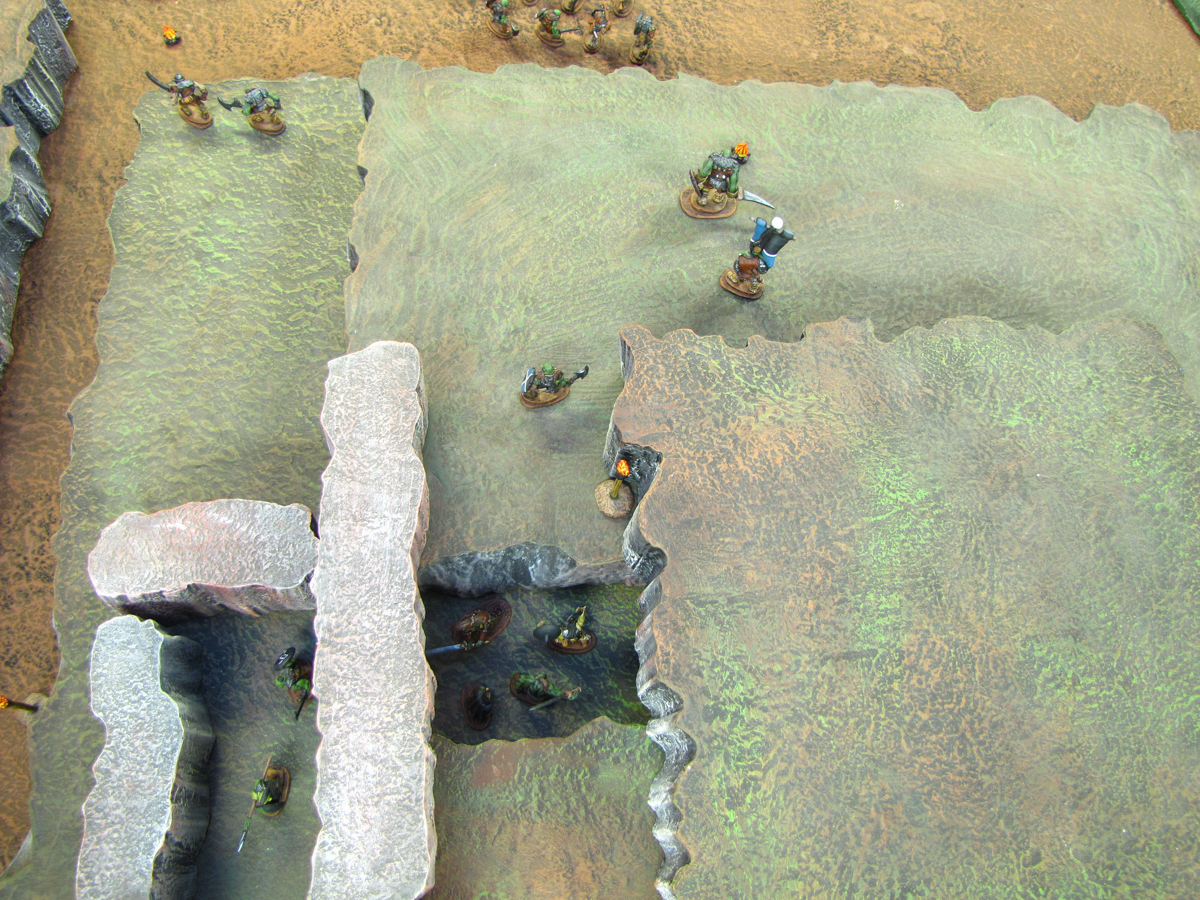 They crept quietly through the mine tunnels, coming at last to a hall right below the hertog.

Vaak led the way, leaping with no difficulty to the floor above. By the time all the others had followed her up, the enemy orcs had responded to the noise. 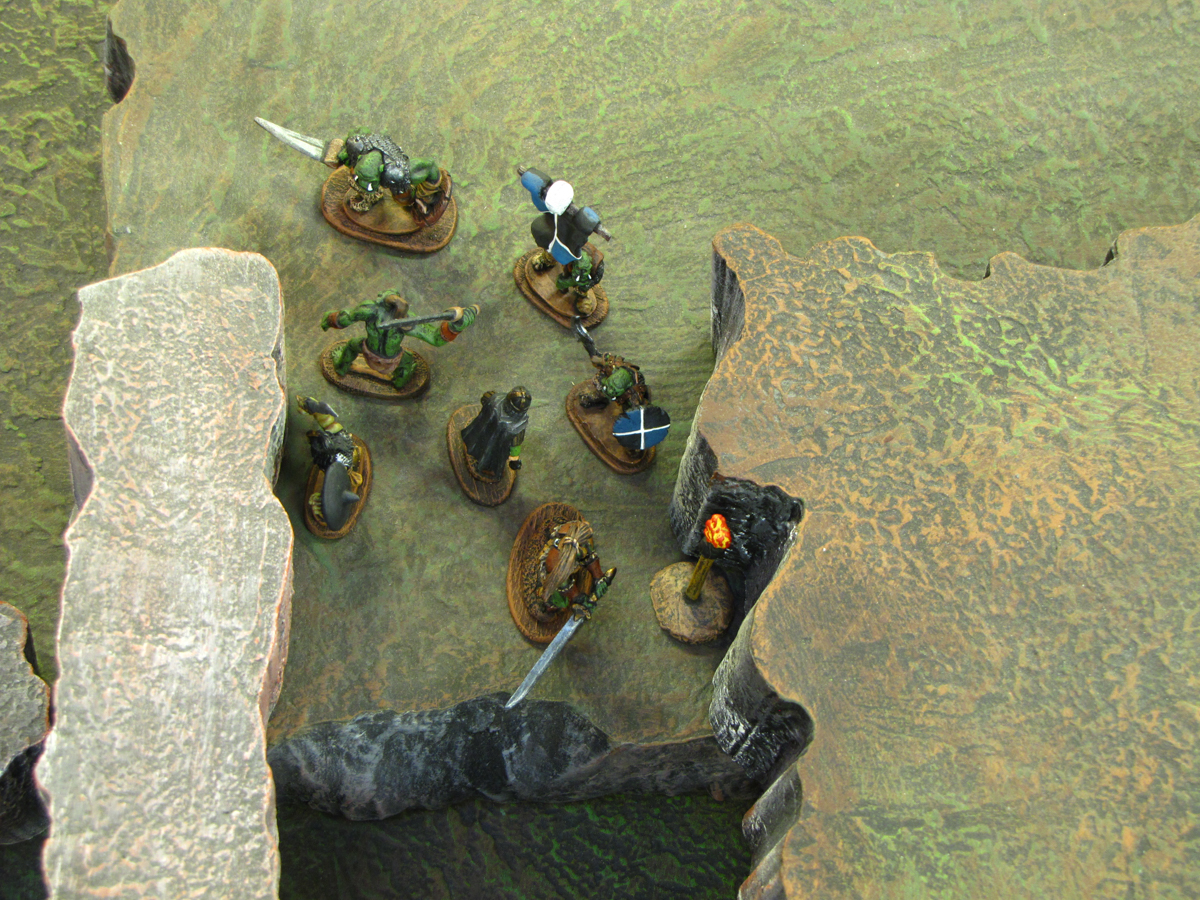 Vaak hacked through the orc guard and engaged the hertog. 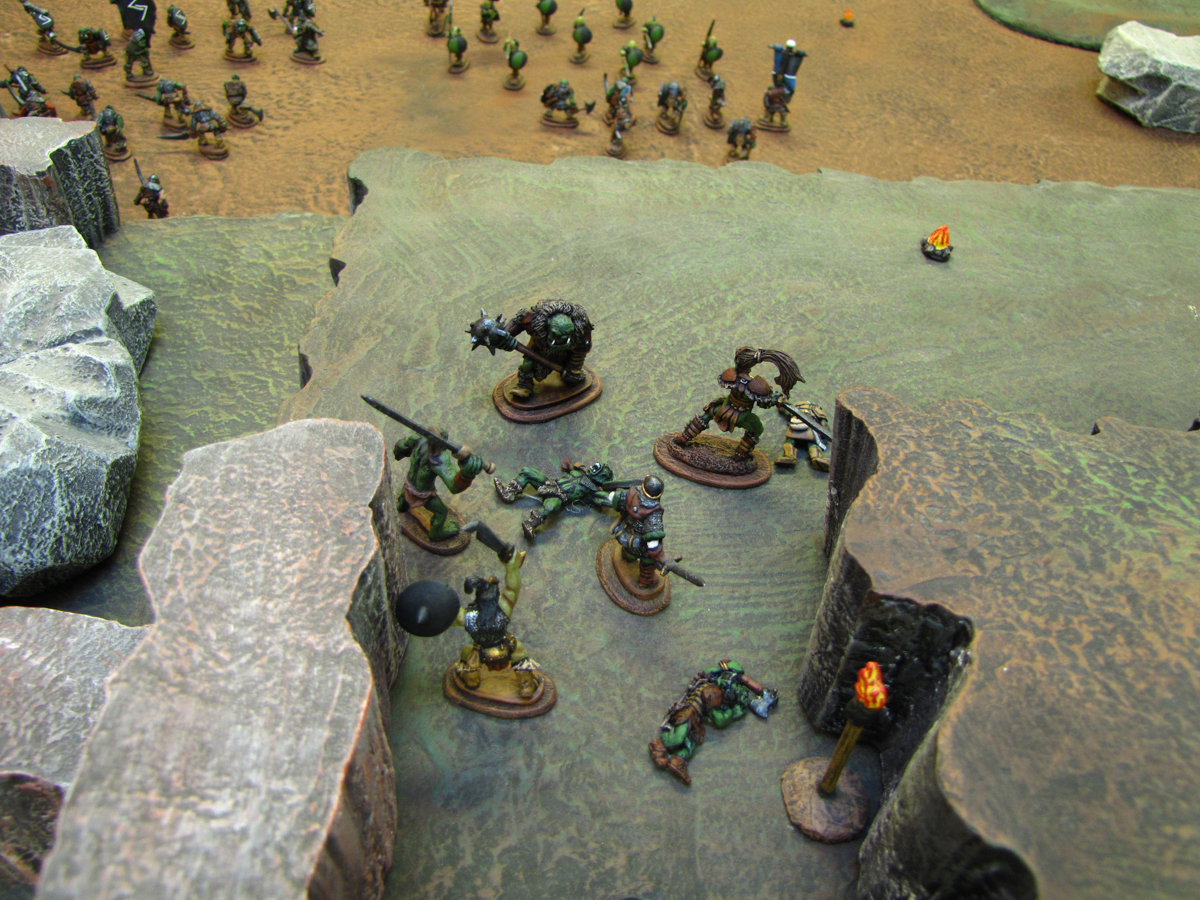 Vaak was the more determined of the urogs and with a mighty blow removed the traitor hertog’s head.

She held it aloft for all the orcs to see and commanded them to join her. Cowed by the defeat of their leader, and the presence of the League of Nil-ith Horn forces, the renegade orcs surrendered.

Vaak Akarya had fulfilled her oath and opened Rostok Mines. Would the Eskander honor his and deliver lands to the urog?