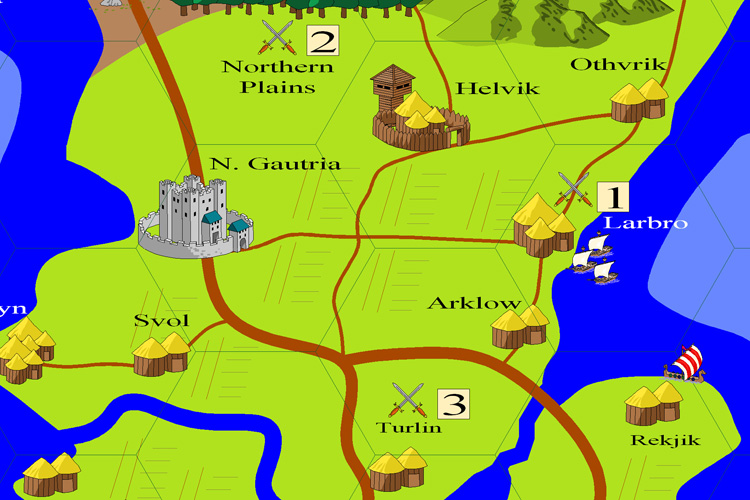 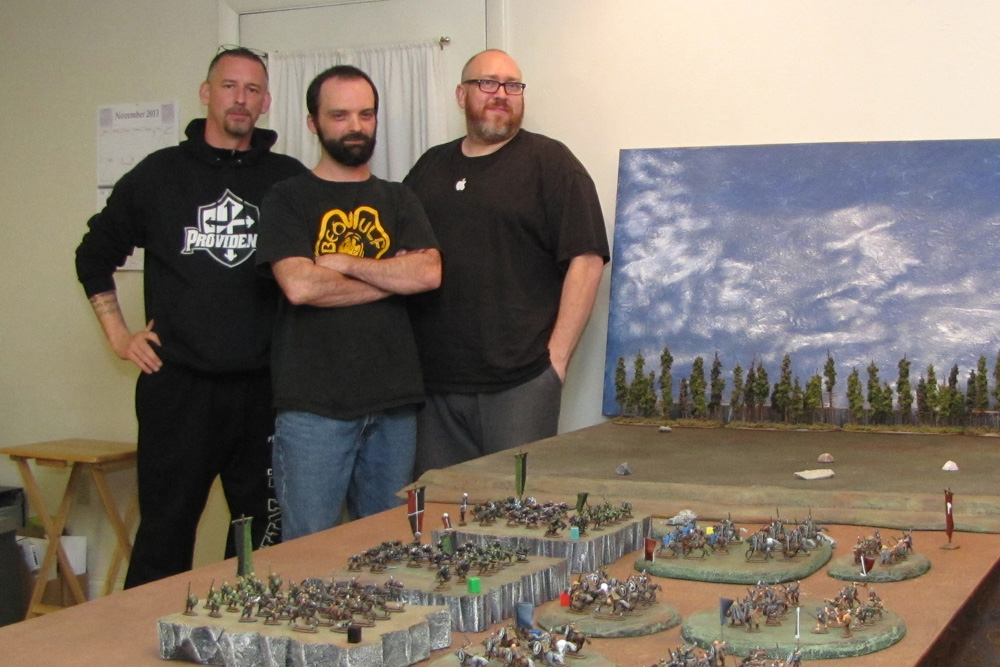 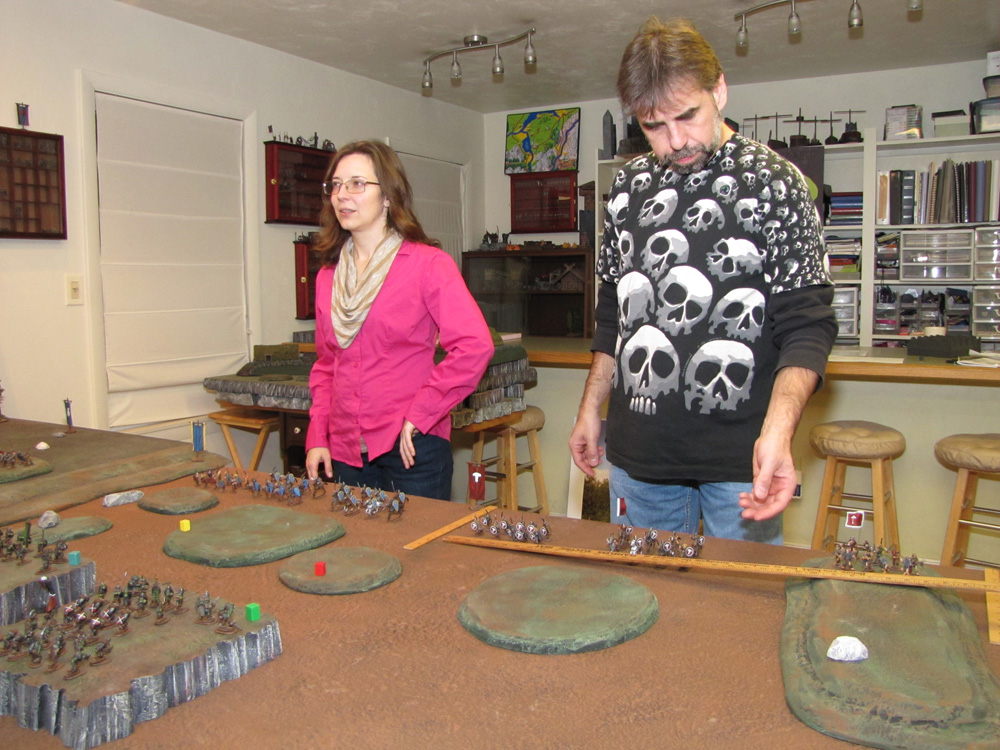 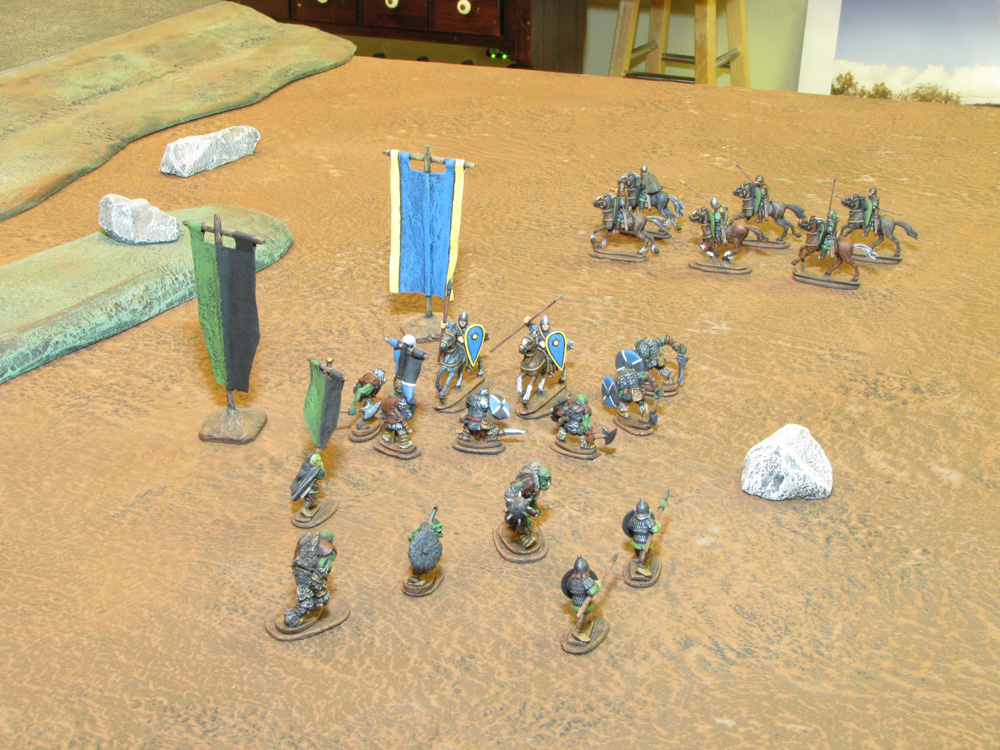 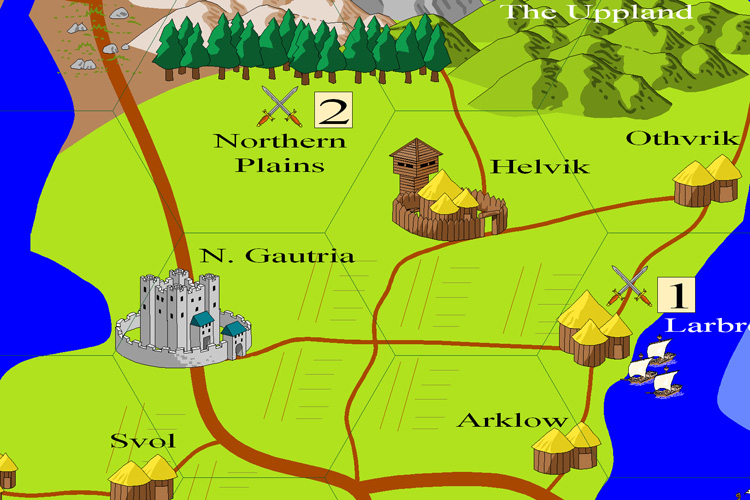 Some of the League of Nil-ith Horn troops crossed over the mouth of the Torgova river and marched overland in an attempt to link up with the landing parties. King Gorm’s outriders caught one such band as the orcs left the cover of the forest. 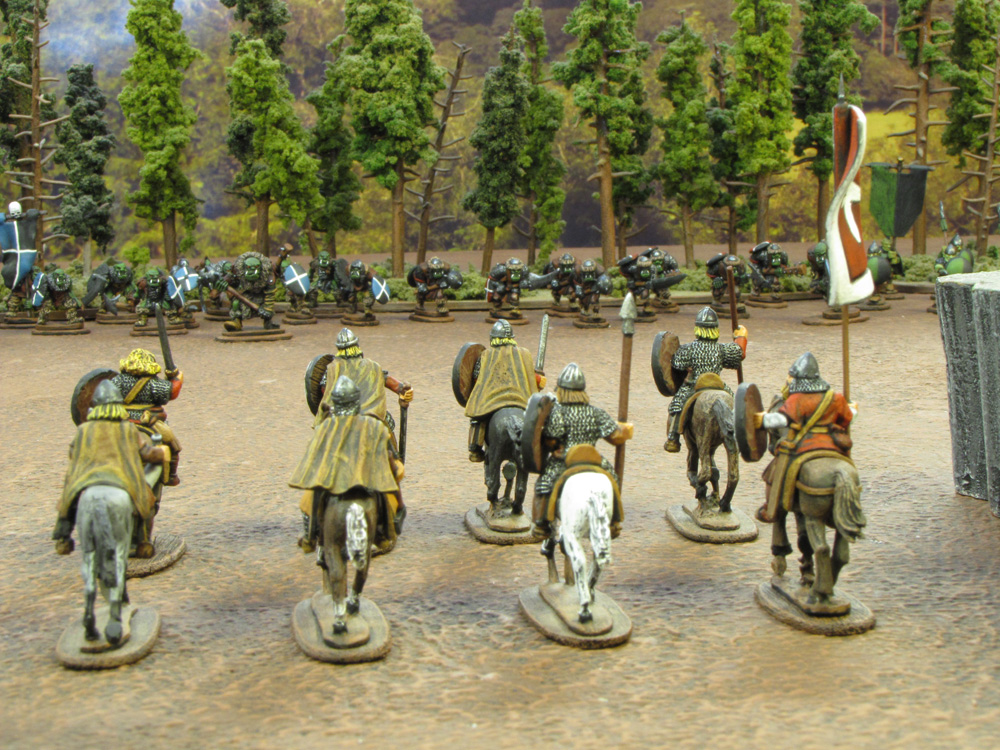 Our second Fantasy Warriors battle of the day (now turned to evening) saw Bleddyn command the riders, supported by a unit of heavy  infantry, and a unit of ulfhednar: light infantry with fast movement. 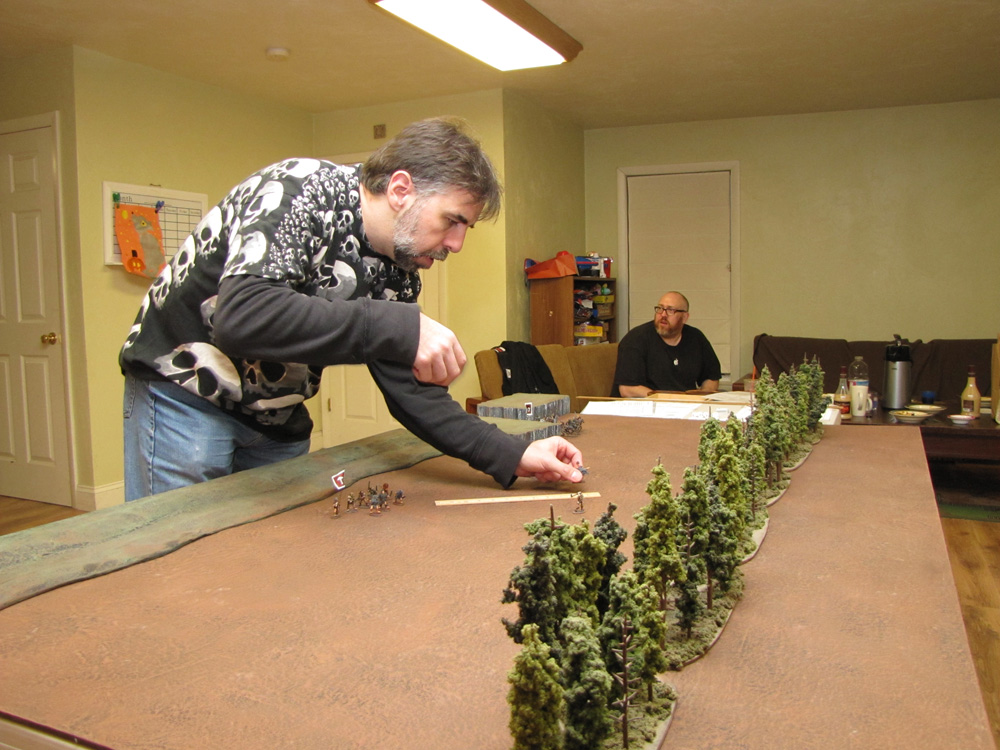 Bleddyn brought his ulfhednar across the field and through the trees, and engaged the League of Nil-ith Horn unit. 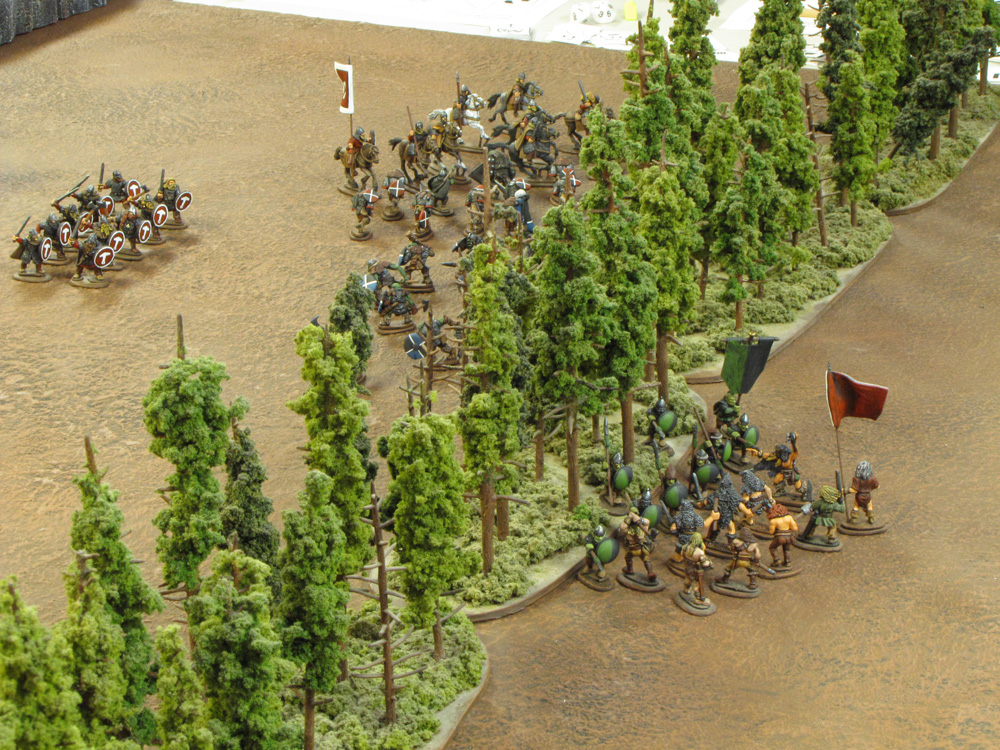 The urogs attacked the horsemen, while the battle leader Graf Stukkin joined with the heavy infantry of valdgraf and continued to close with the humans. 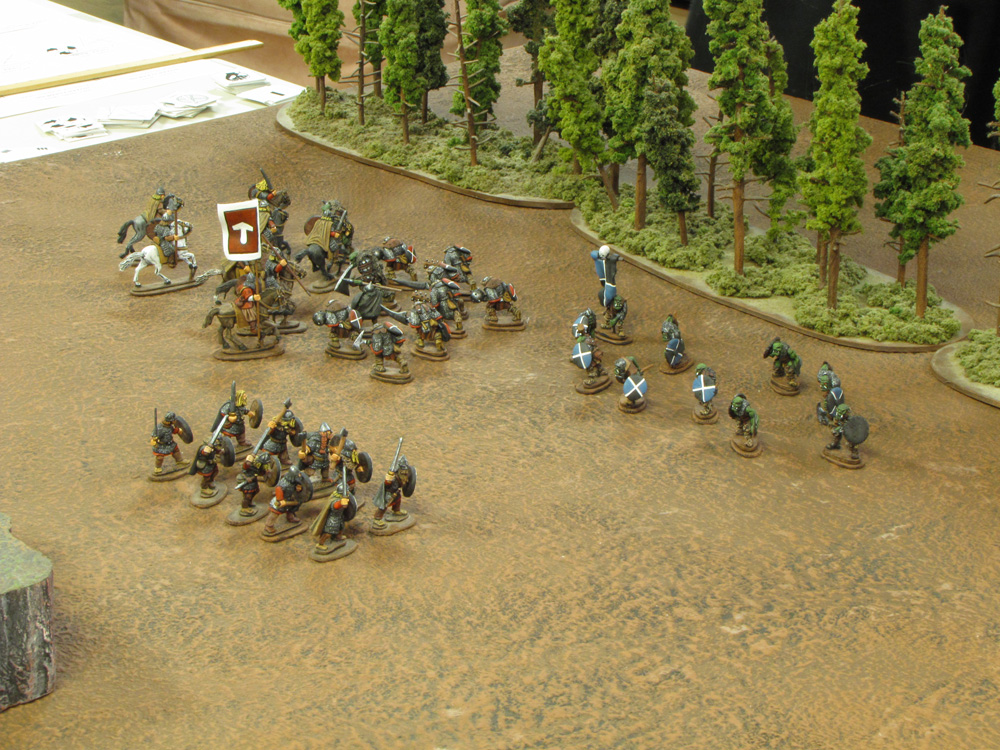 The fighting was fierce and bloody, as the valdgraf heavy infantry joined the 2 urogs in their slaughter of the cavalry.

Bleddyn’s ulfhednar routed the League orc unit and sprinted to attack the remaining orcs. Blows were dealt back and forth.

Only the orc leader and the human bannnerman remained. They each got a saving throw. 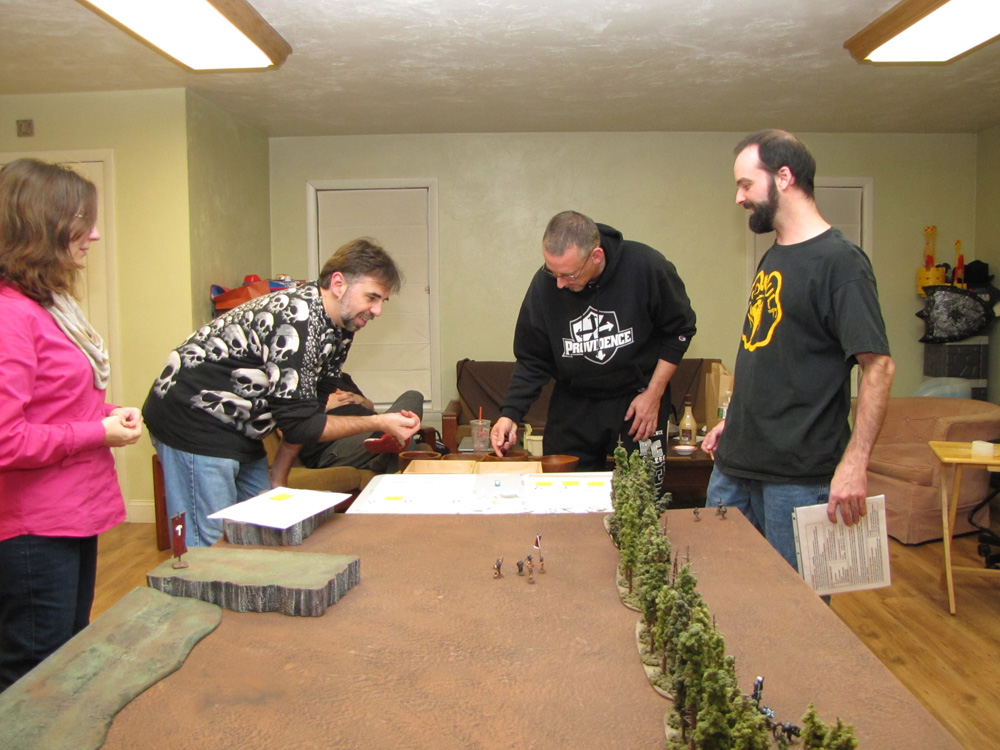 The bloodbath came down to the last dice roll. Would anyone walk away from this battlefield? 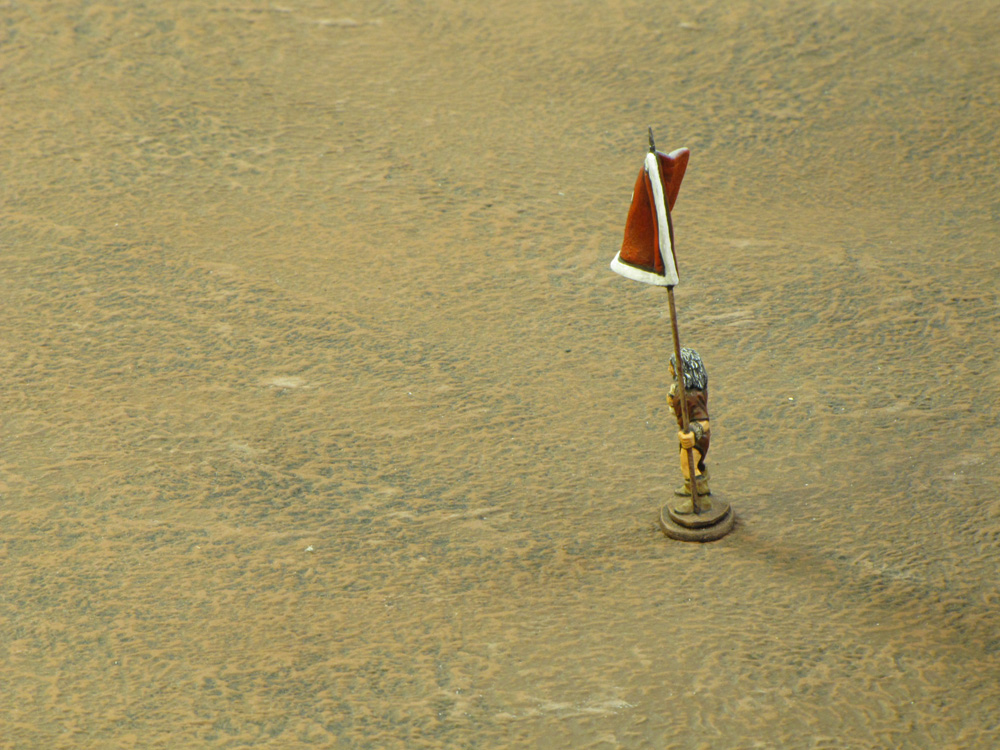 The lone bannerman would! Bleddyn made his save and assured the people of North Gautria would be safe from these wretched orcs. 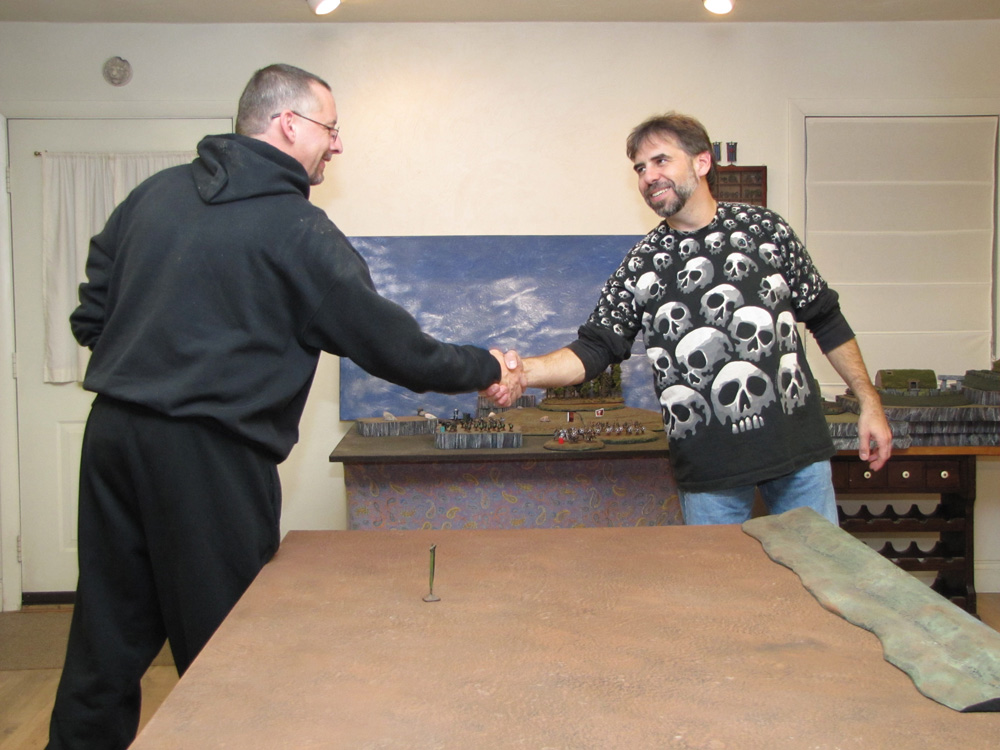 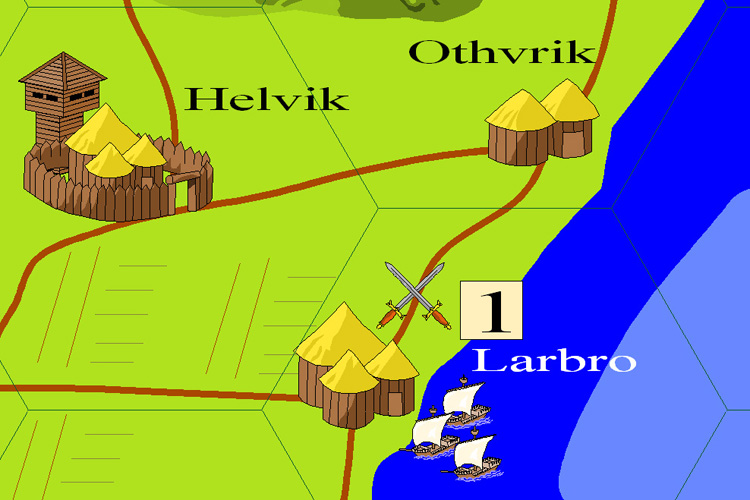 The first scenario featured our daughter as battle leader of the human village Larbro defending her people against the raiding orcs. She had to get a unit of women and children away from the sod huts, across the coast and into the woods.

Alarun rowed his forces in to quickly close with the warriors and attempt to capture the women.

This battle was to resolve what happened here in North Gautria while main characters were elsewhere on the map, and answer the age-old gaming question, “If a village is sacked and no player-character is there to witness it, does it really burn?” 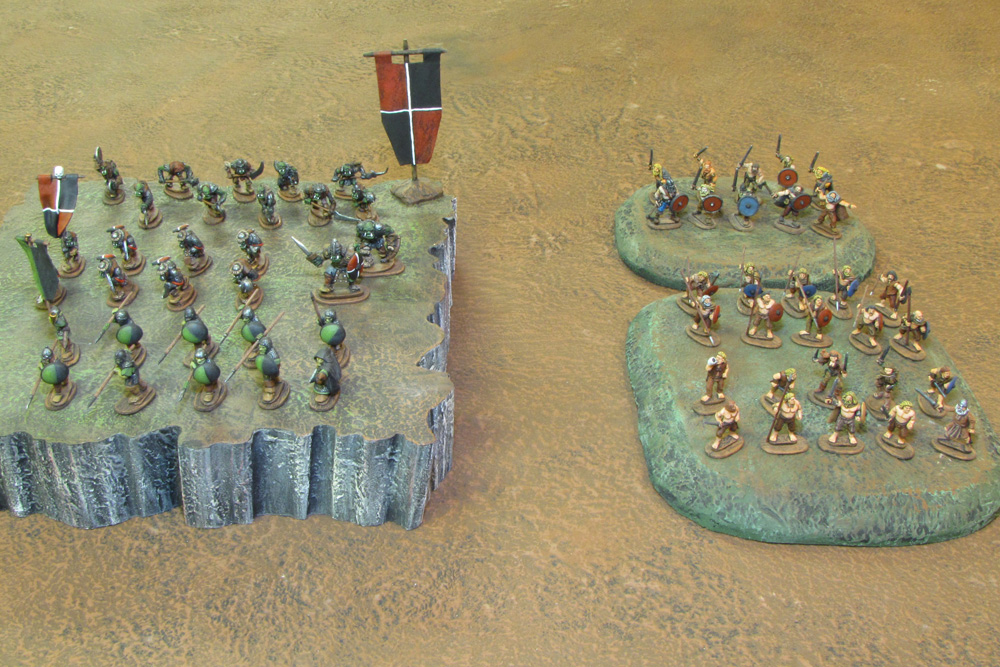 Our daughter was an extremely good sport, as this was not a “fair” fight. She had 3 units of light infantry for the defense of Larbro and needed to hold for about 10 rounds to allow her civilians to escape. The orcs’ 3 units wore heavy armor and were outfitted for raiding, but one unit had to remain with the boats. 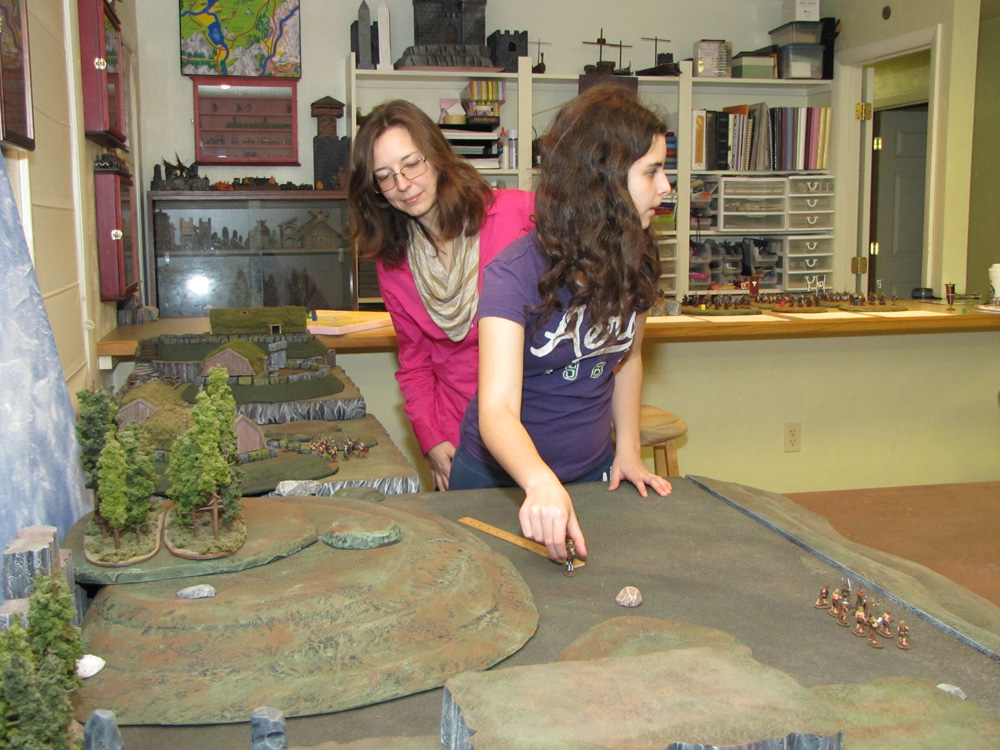 The orcs also had 2 urog heroes to Meav’s one bondi leader, who seemed a bit overwhelmed with his command. 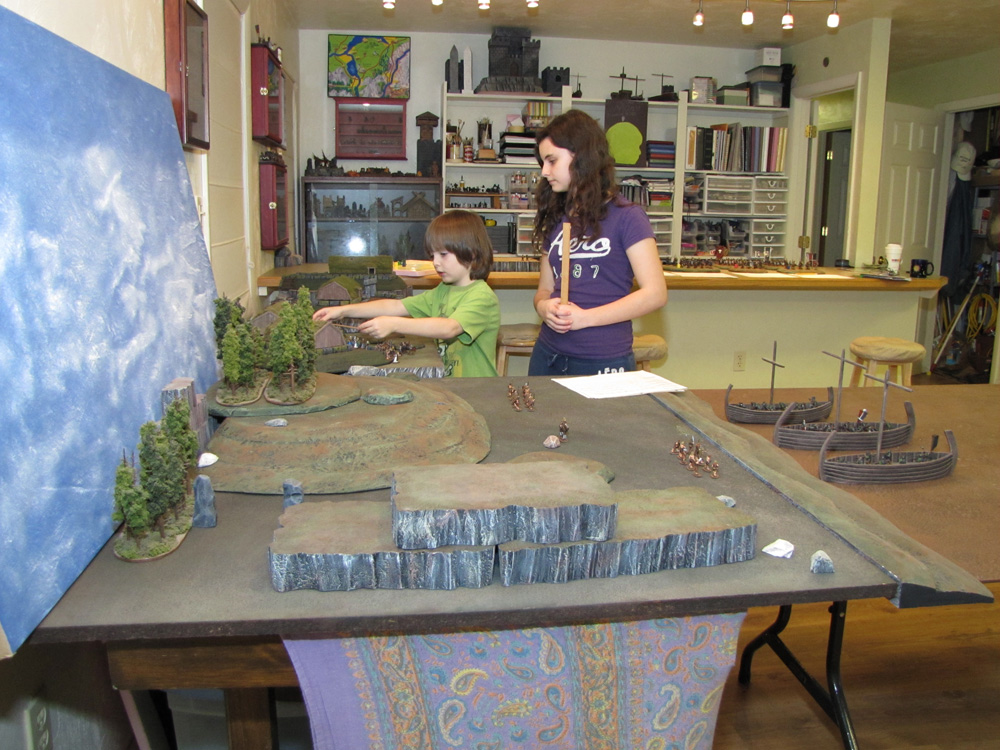 She sent 2 units to the beach and kept her best unit back to screen the women and children, unwittingly leaving her battle leader unprotected after he issued the orders. (Mom’s bad! It was our daughter’s first Fantasy Warriors battle.) 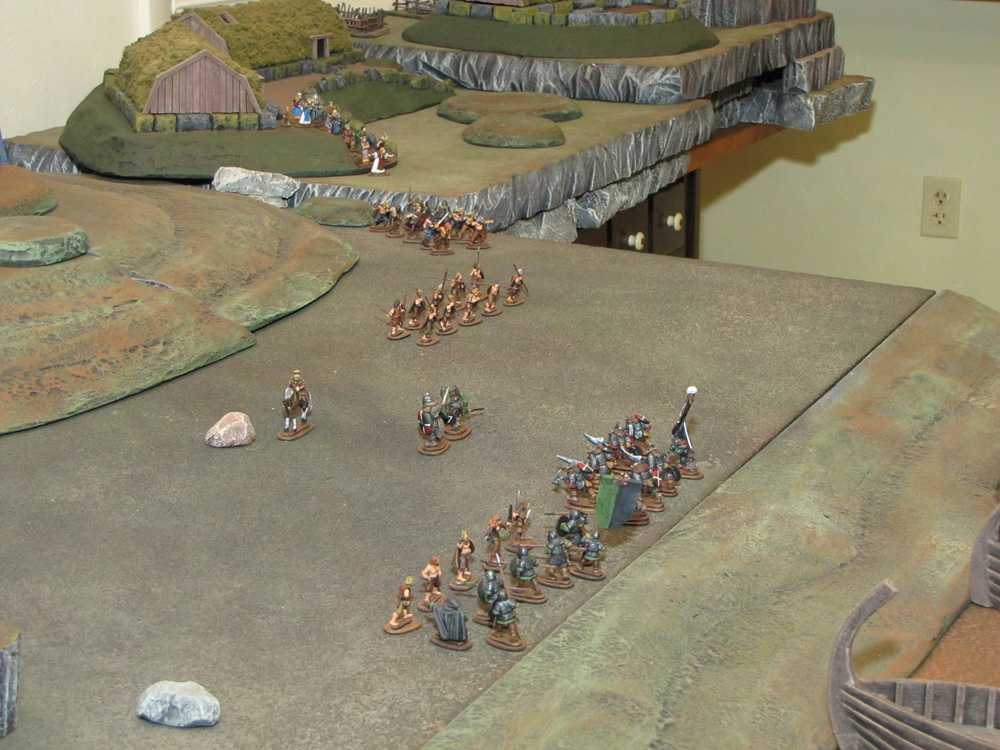 The orcs disembarked while the urogs sprinted ahead to attack the human’s leader. 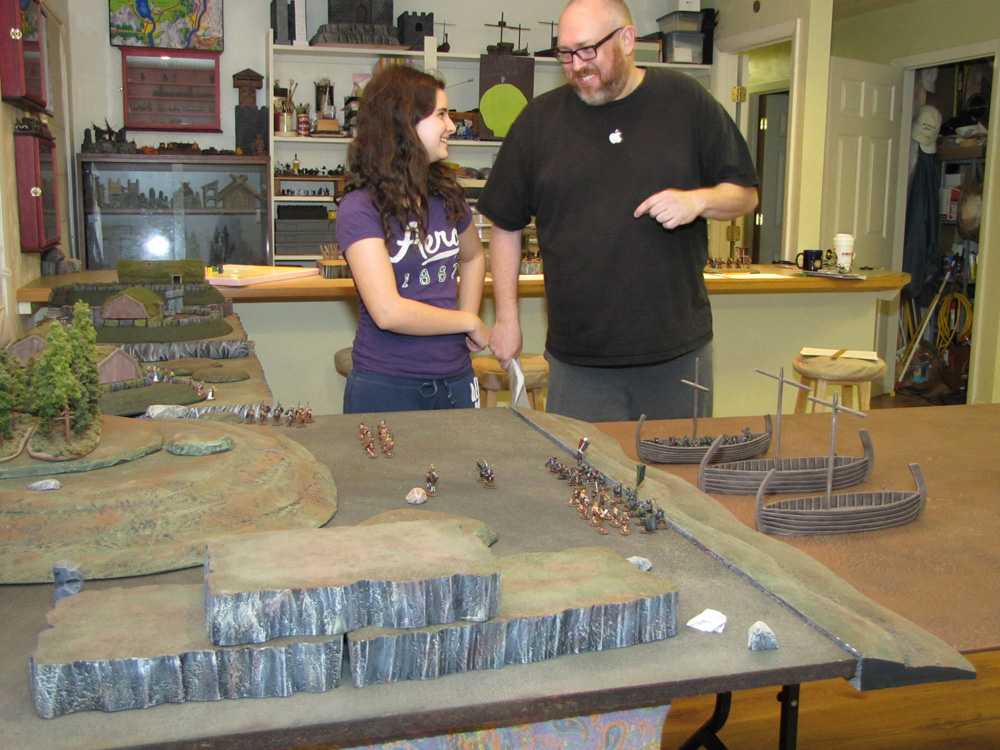 Alarun told my daughter all the bad things that would happen to that leader if she lost initiative next round. 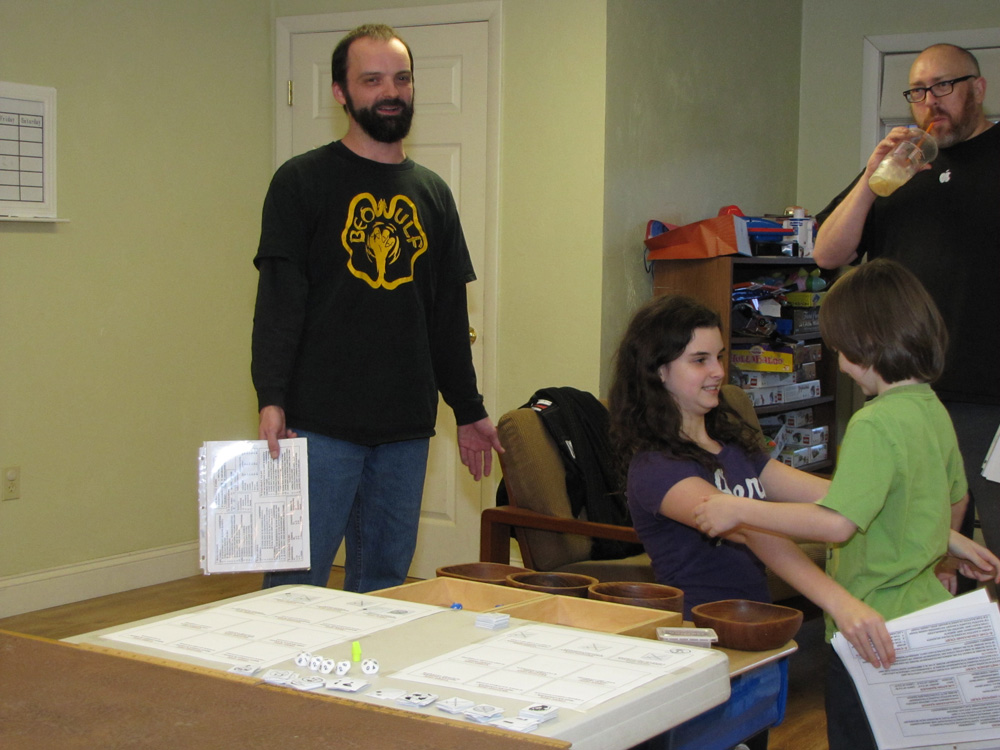 And our youngest rolled lucky! 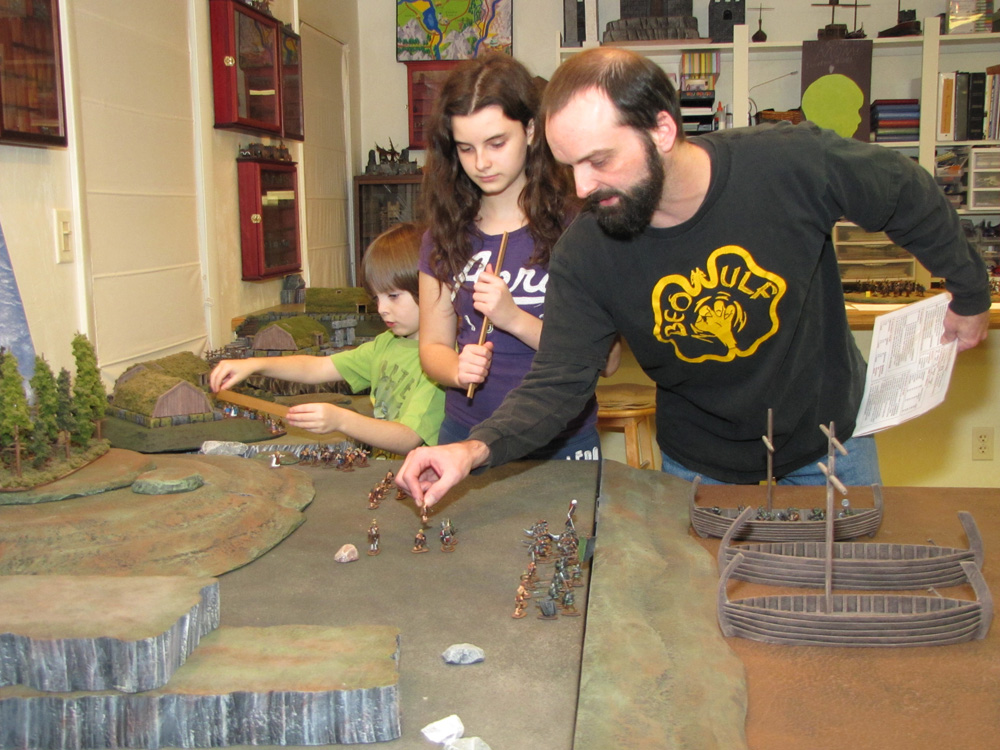 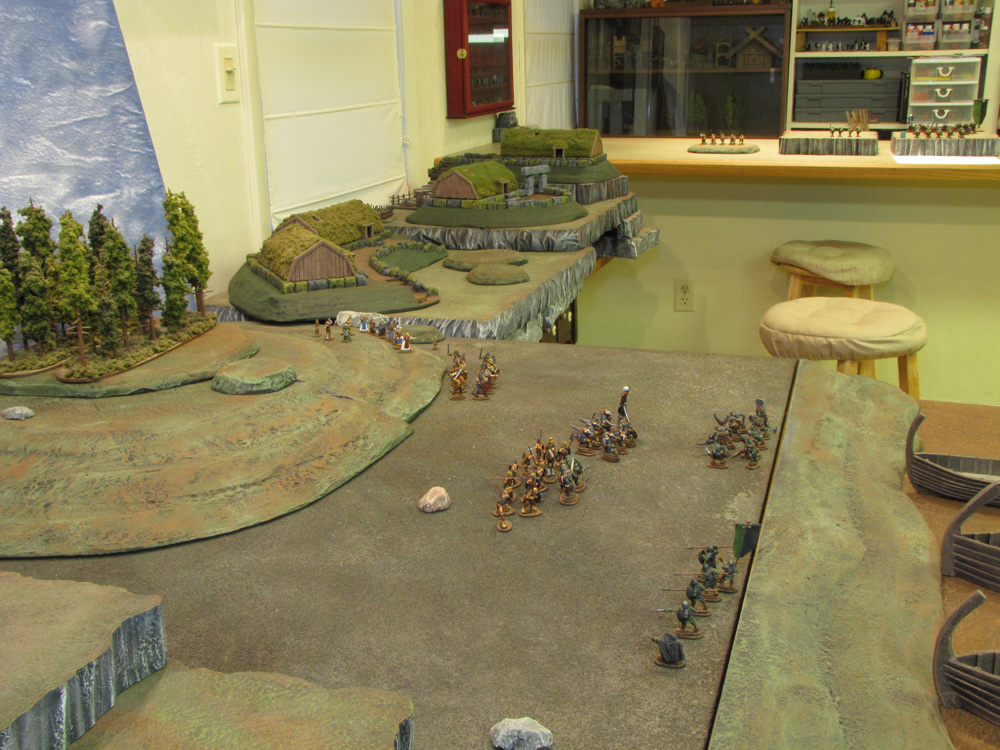 Her first unit engaged with the Nil-ith Horn (green & black) orcs took heavy losses and was destroyed. The veteran bondi stepped forward to confront the Valdgraf (red & black) unit and their ugly two-handed weapons, but the unruly Great Northern (brown) berserk orcs crashed through their line from behind, eager to fight the humans. 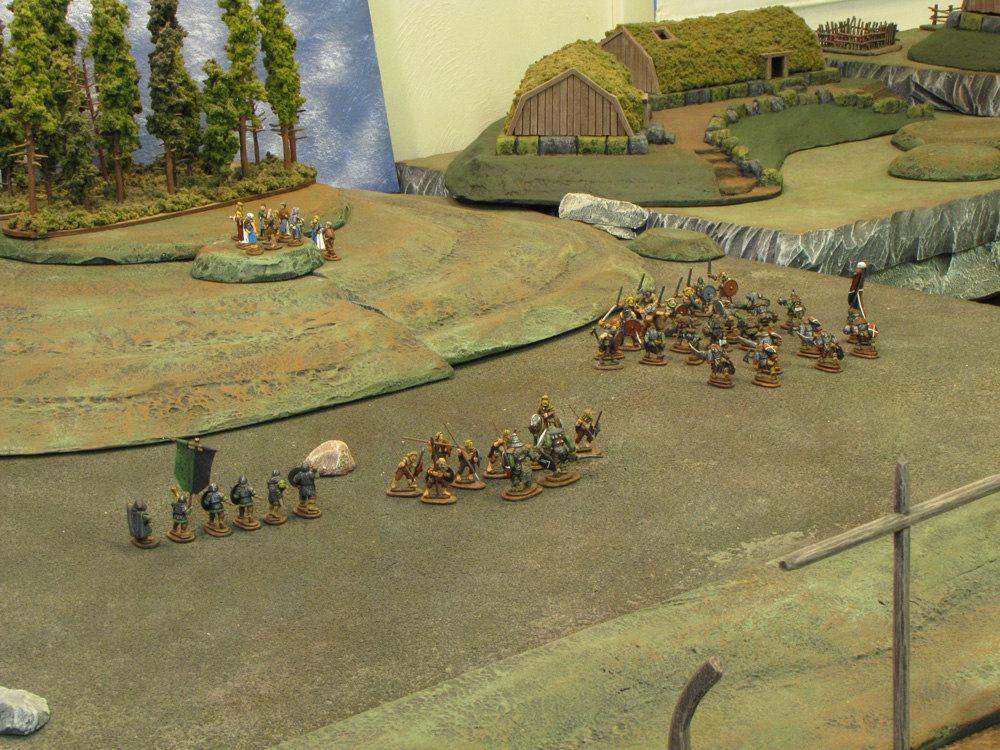 The women continued their fearful trek as the Nil-ith Horn soldiers marched on them. The human bondi and their battle leader fought the urogs with valor. 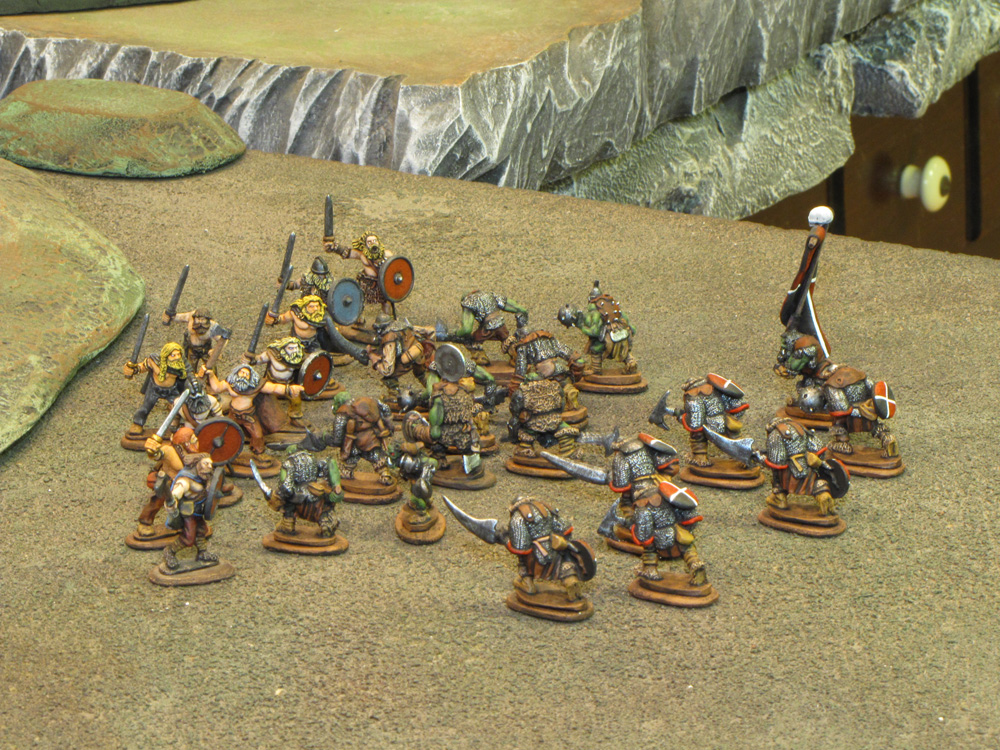 The bondi veterans faced an onslaught. 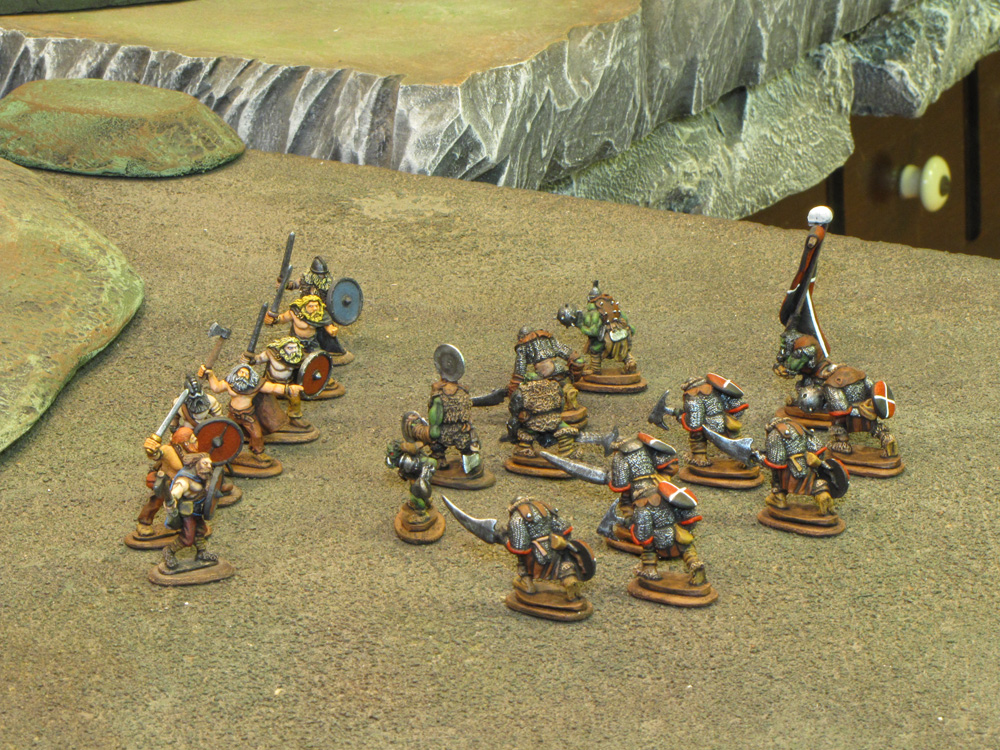 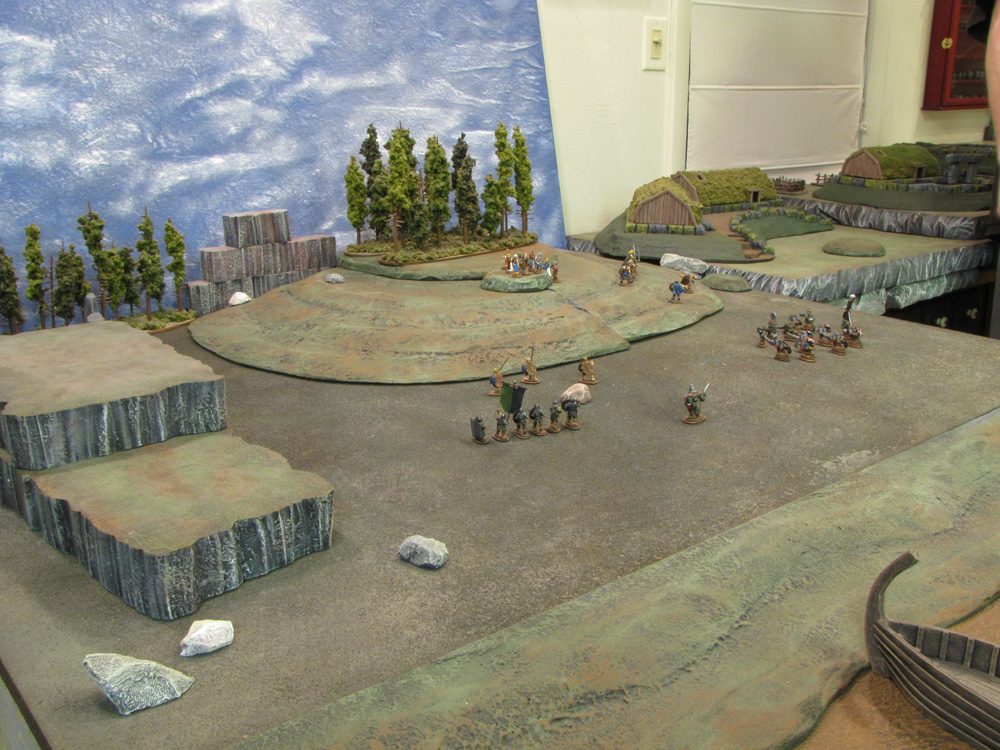 But the humans were overwhelmed, as both her remaining units routed. 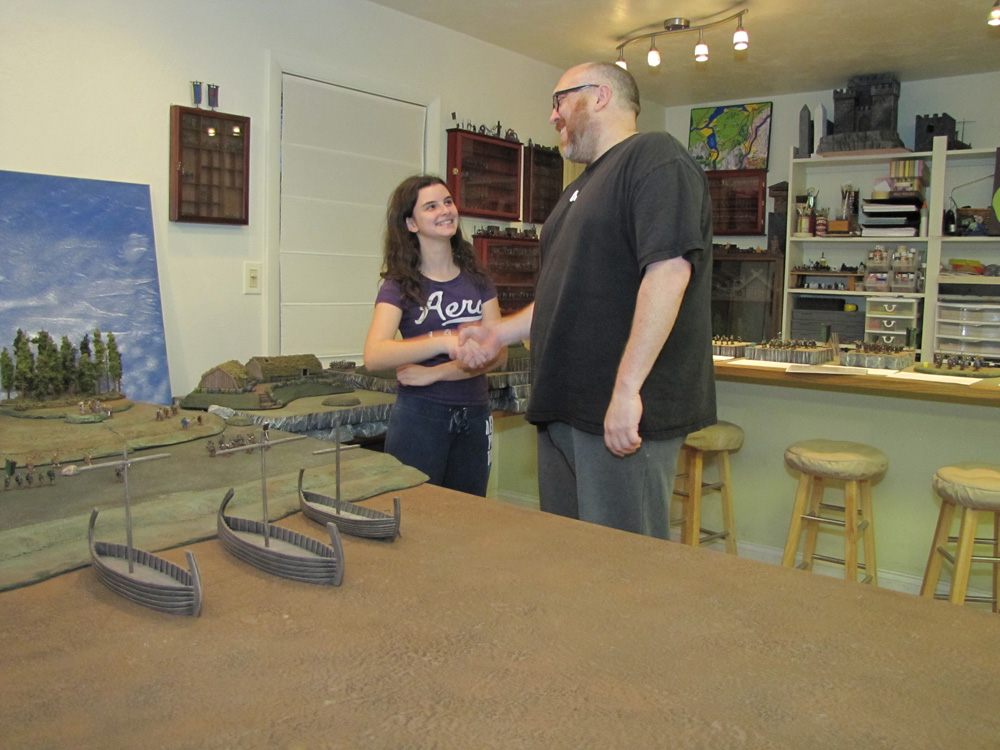 The League of Nil-ith Horn orc forces secured plunder and a beachhead due to the success of the Raid on Larbro.