King Kvig led his army to victory over the Varak orcs who had appropriated the mines of Hellgate from Kvig’s vassal Vestar Vastar. (Sagas of the Gautrian Kings #52- The Battle for Hellgate Mines). Kvig now had to decide who to install as jarl over the newly-recovered mines. 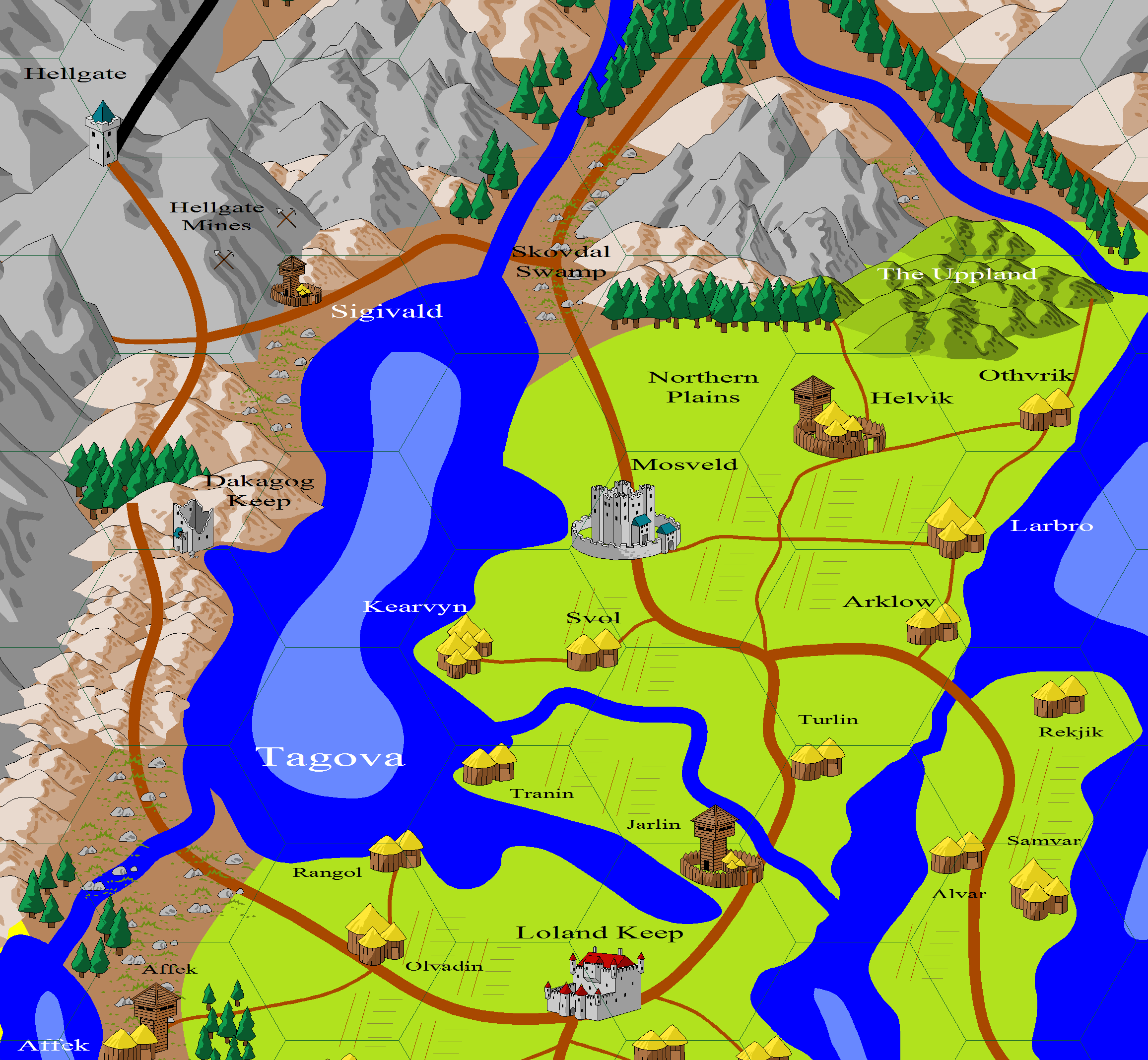 The Kildarian knight Baron Vulmar was outspoken, “We Kildarians have won many battles for you, King Kvig. Vestar has wasted the lives of many warriors and many more miners. Give me the mines and let Kildarian expertise get you rich! I will have these mines spilling forth silver the Vastars’ couldn’t even imagine.”

Vestar Vastar was enraged. “Generations of Vastar blood have paid for Hellgate silver! My clan has fought the Varak orcs time and again. These are my lands by right!”

Kvig surveyed Vestar and his many injured and poorly-armored bonders. Then King Kvig looked to Baron Vulmar and the Kilarians. The elite knights stood tall in their bloodied chainmail. It seemed an easy decision.

“Baron Vulmar shall have Hellgate mines and the keep at Sigivald Hold,” announced Kvig. “Any of Clan Vastar who wish to stay will be given positions defending the lands, or working the mines.”

“Odin curse you, Kvig Melgarson!” exclaimed Vestar. “You and your witch-queen have brought my son to death’s door and cheated my clan. I will have repayment for all your wrongs.” Vestar Vastar gathered a few loyal men and left Sigivald Hold. 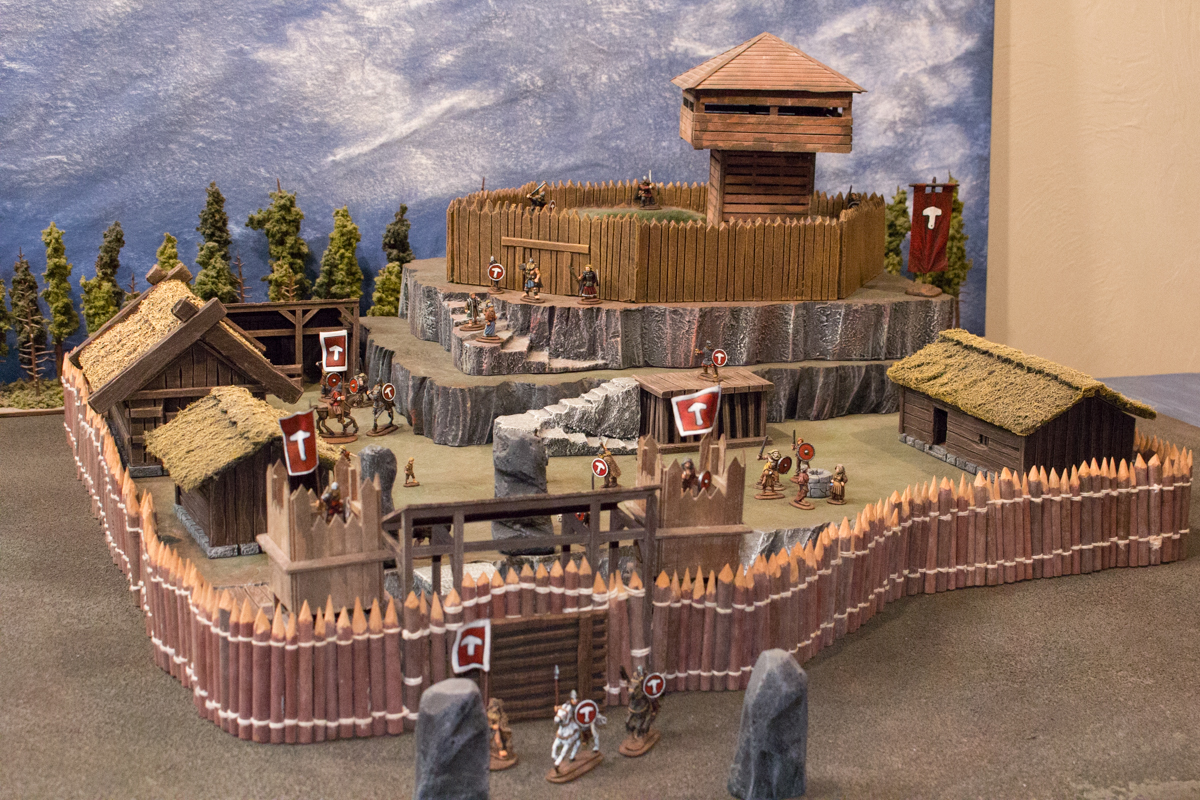 “The orcs gather at Hellgate Pass. I have brought my men and those of my kin who would join you and push the orcs back into the mountains,” said Bjorn. “Bleddyn, take my brothers among your ulfhednar.”

Bjorn introduced his cousin Karlsefni. Karlsefni had been a slave to the Varak orcs in the west.

“The Varak orcs look to reclaim these lands on the lake,” said Karlsefni. “We have tracked a new group through Hellgate Pass. They scream for blood, King Kvig, and they are coming with a War-God.”

“You will see on the battlefield,” answered Karlsefni.

King Kvig, Bleddyn and Wynston marched their troops to Hellgate Pass, and saw the orcs there ready for battle. 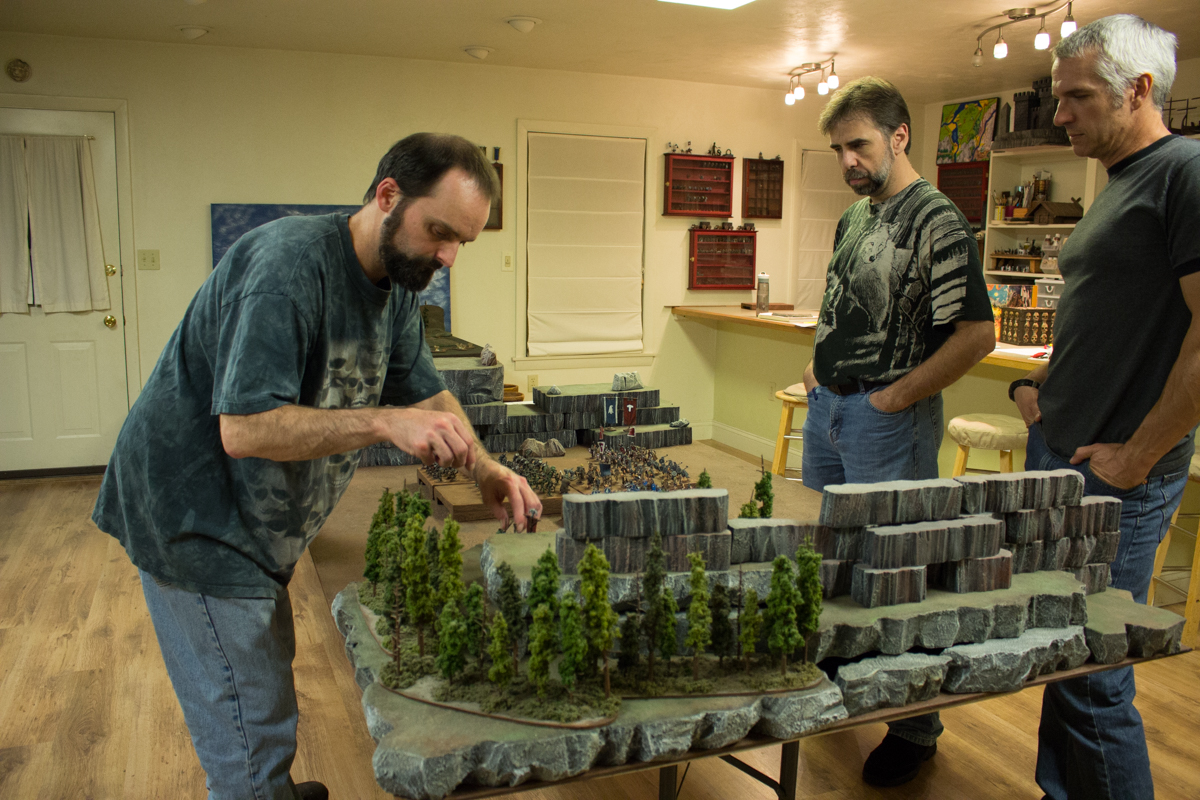 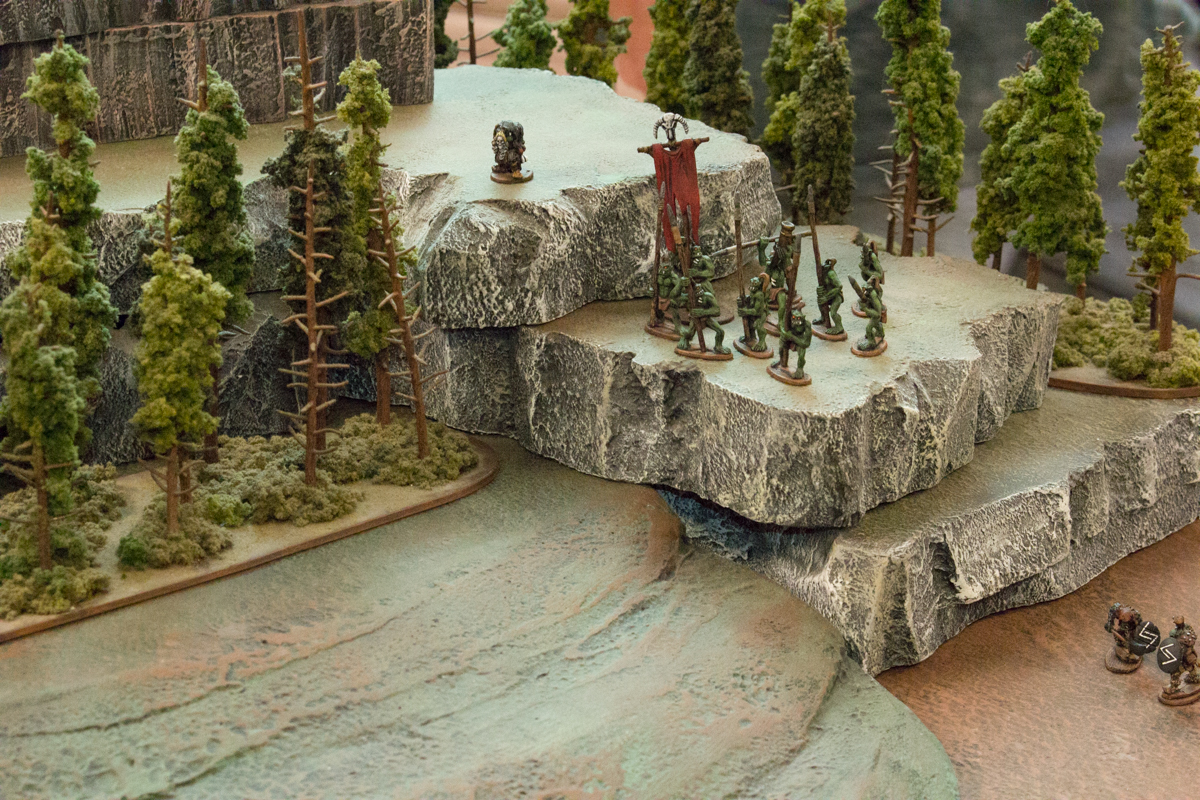 Scores more orcs assembled in tight formations, blocking the road through the pass. 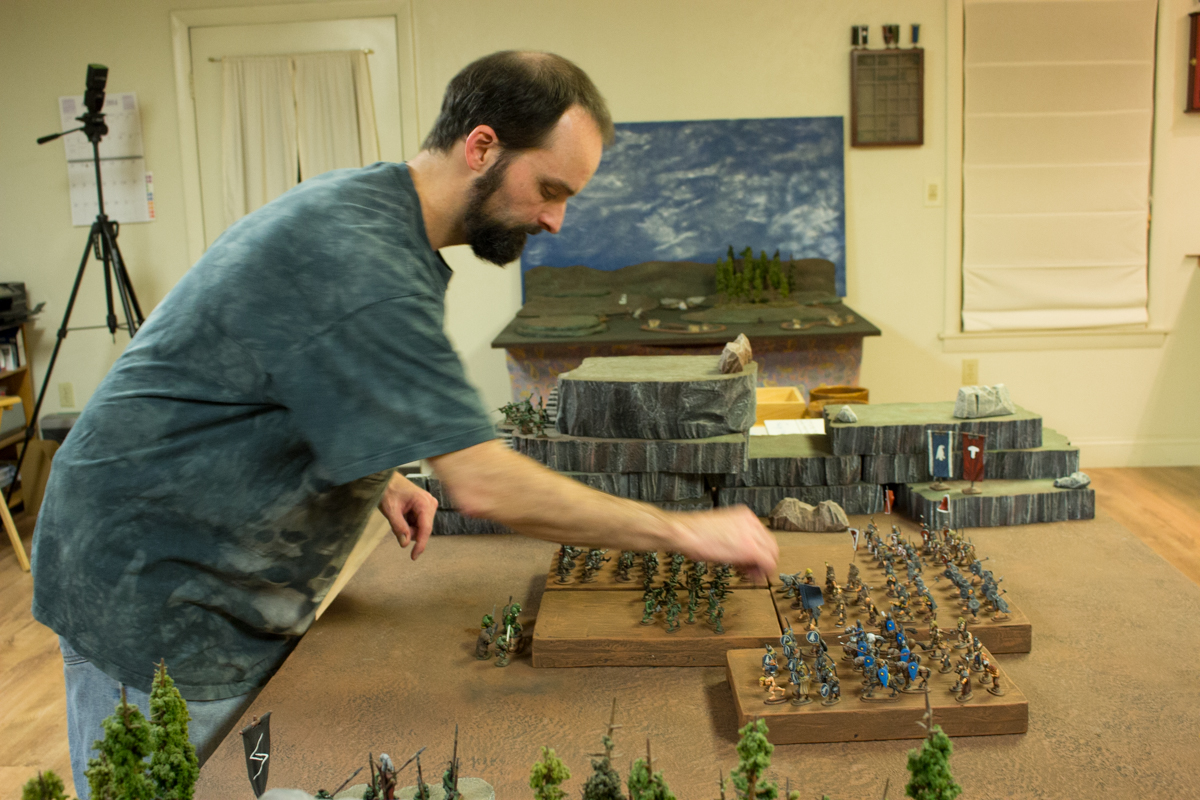 King Kvig’s men responded in kind, spreading their forces in a long line across the pass. 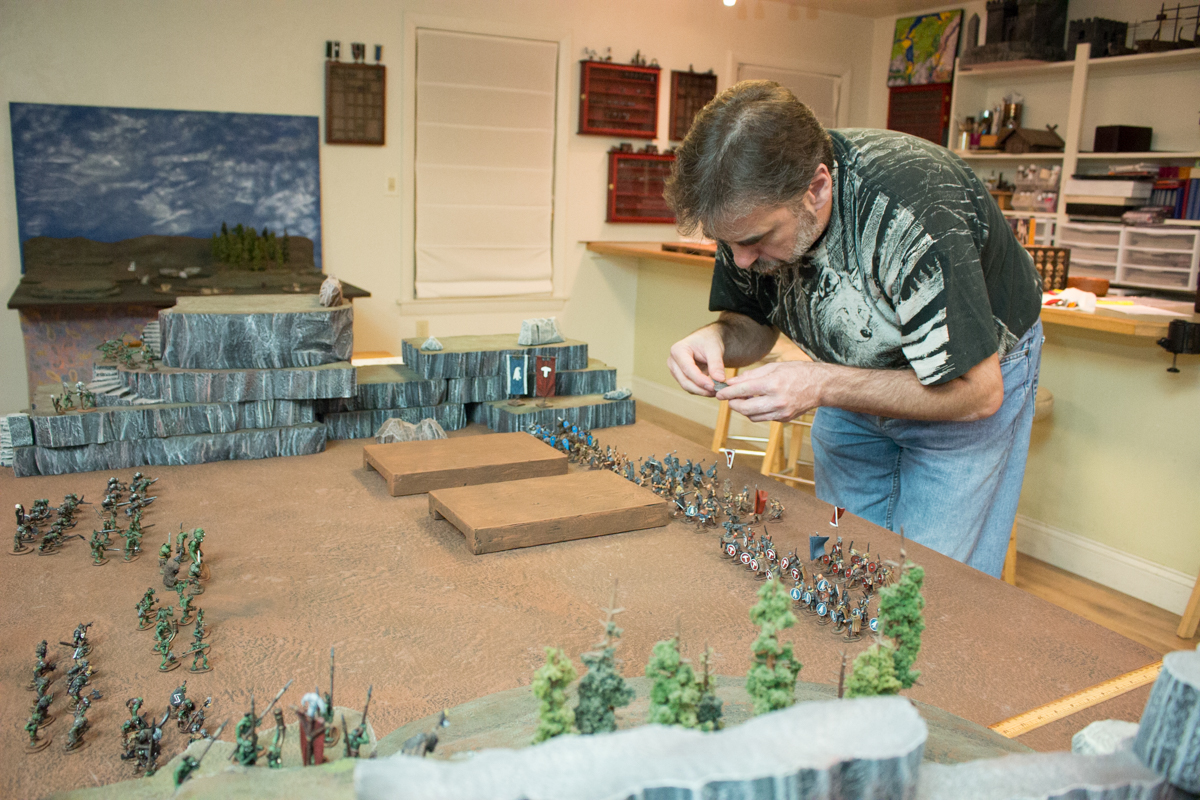 The War-God stood before the orcs and bellowed to his troops. 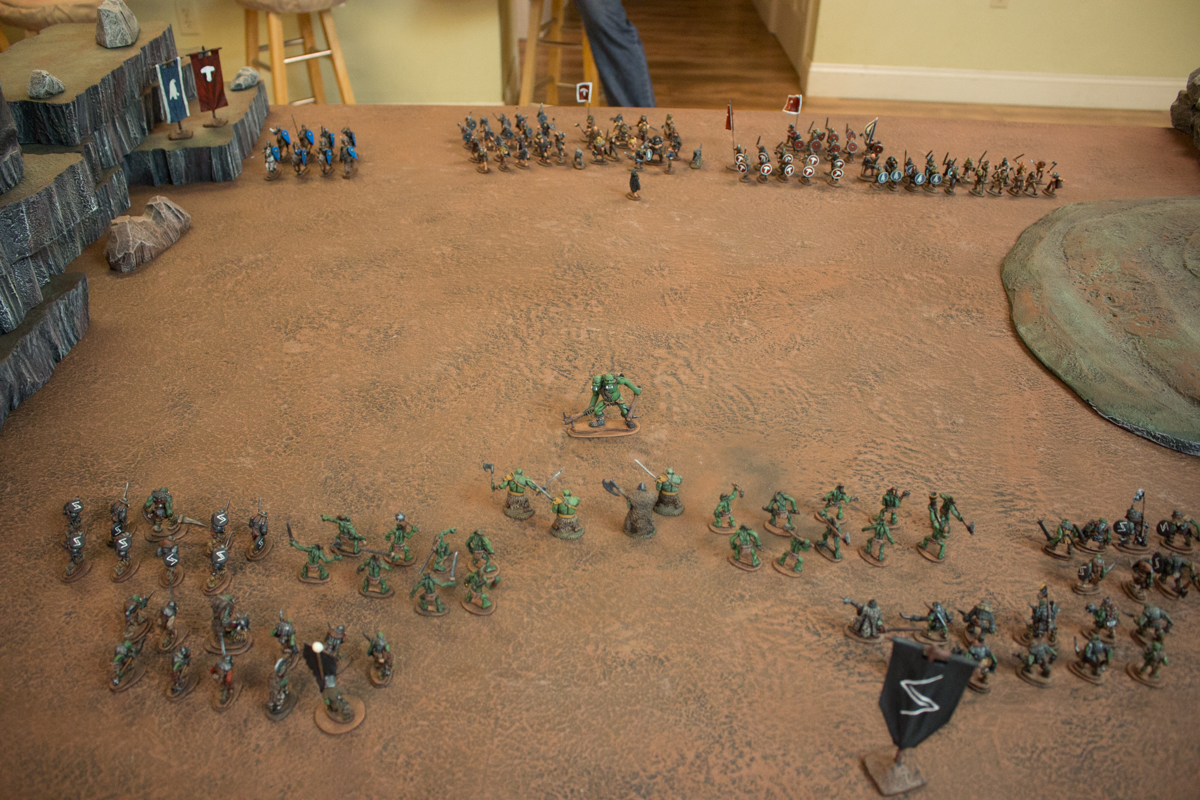 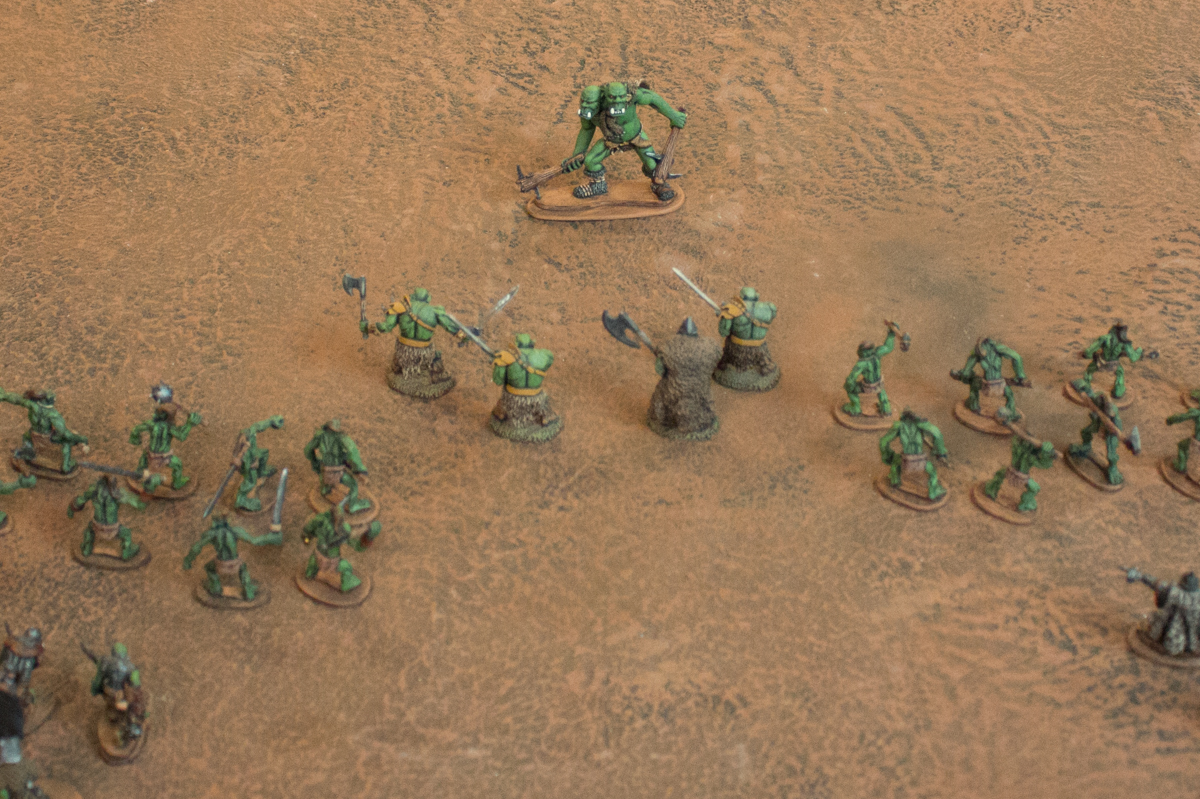 The heavy infantry of the Gautrian army trudged into the pass. 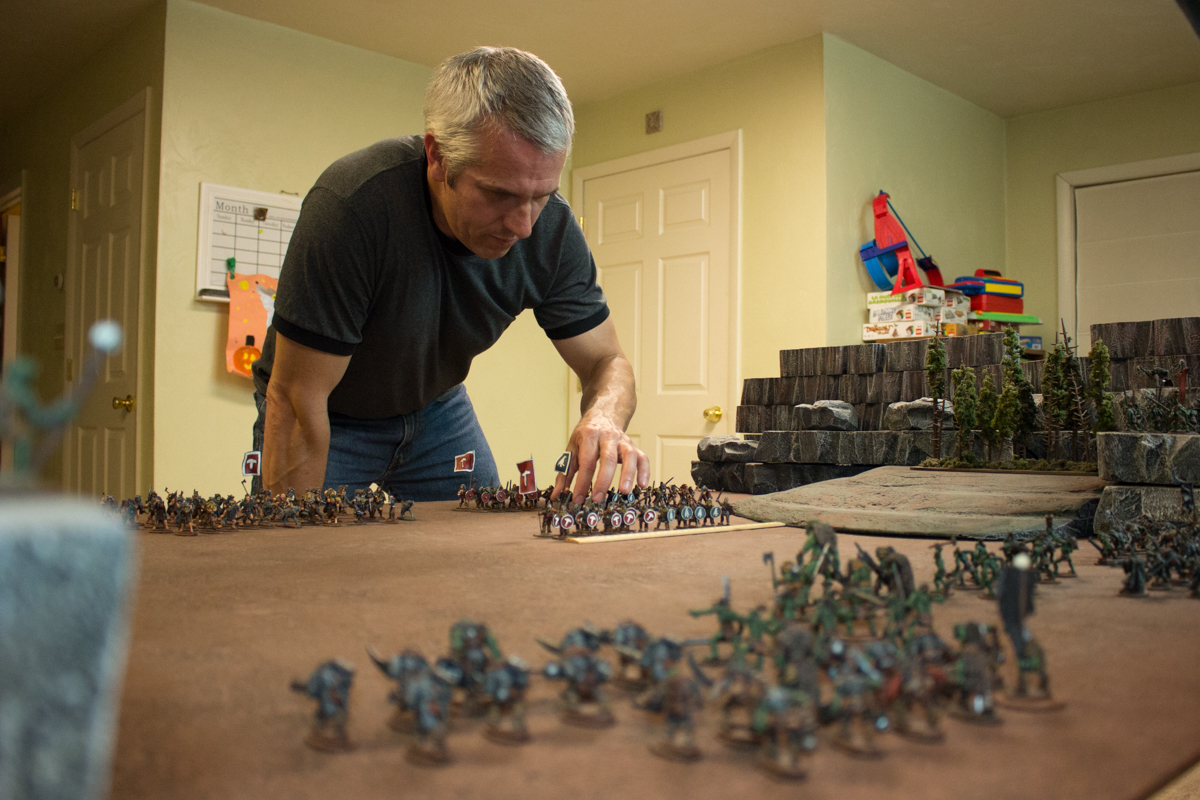 The speedy ulfhednar and mounted knights sprinted across the gap. 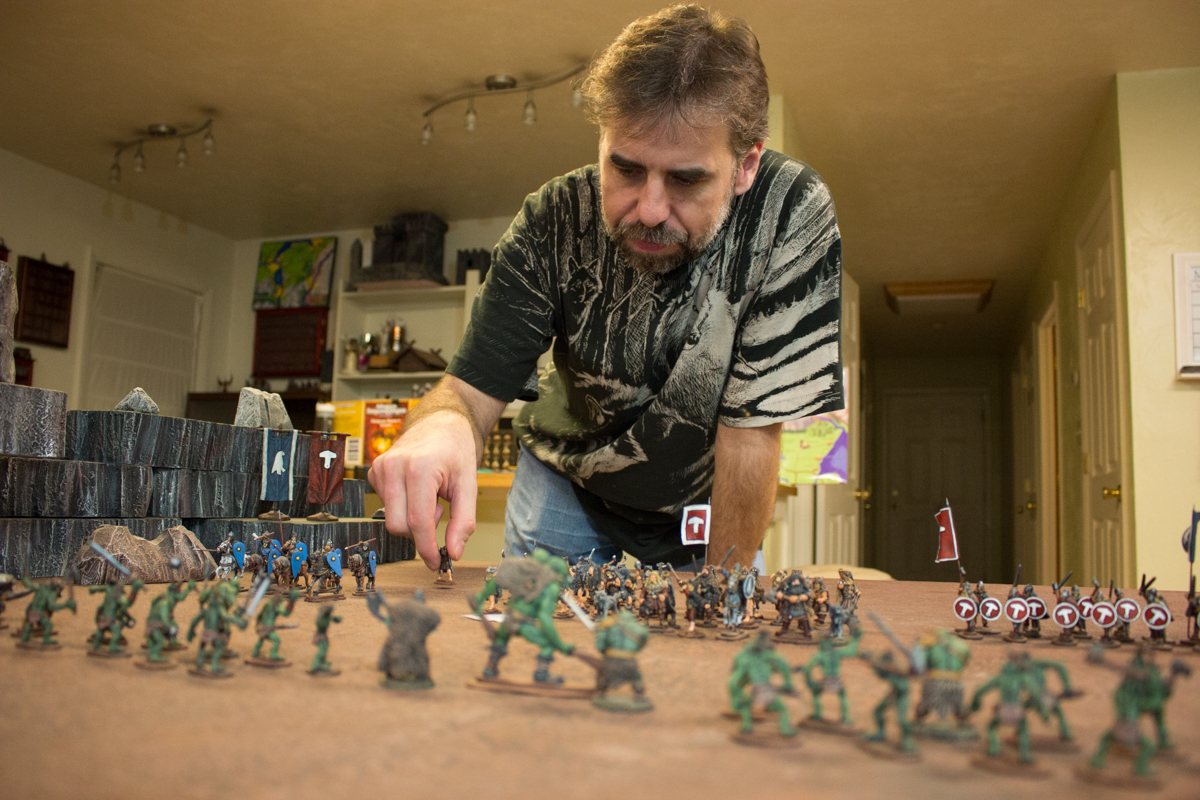 The War-God held his ranks in check. 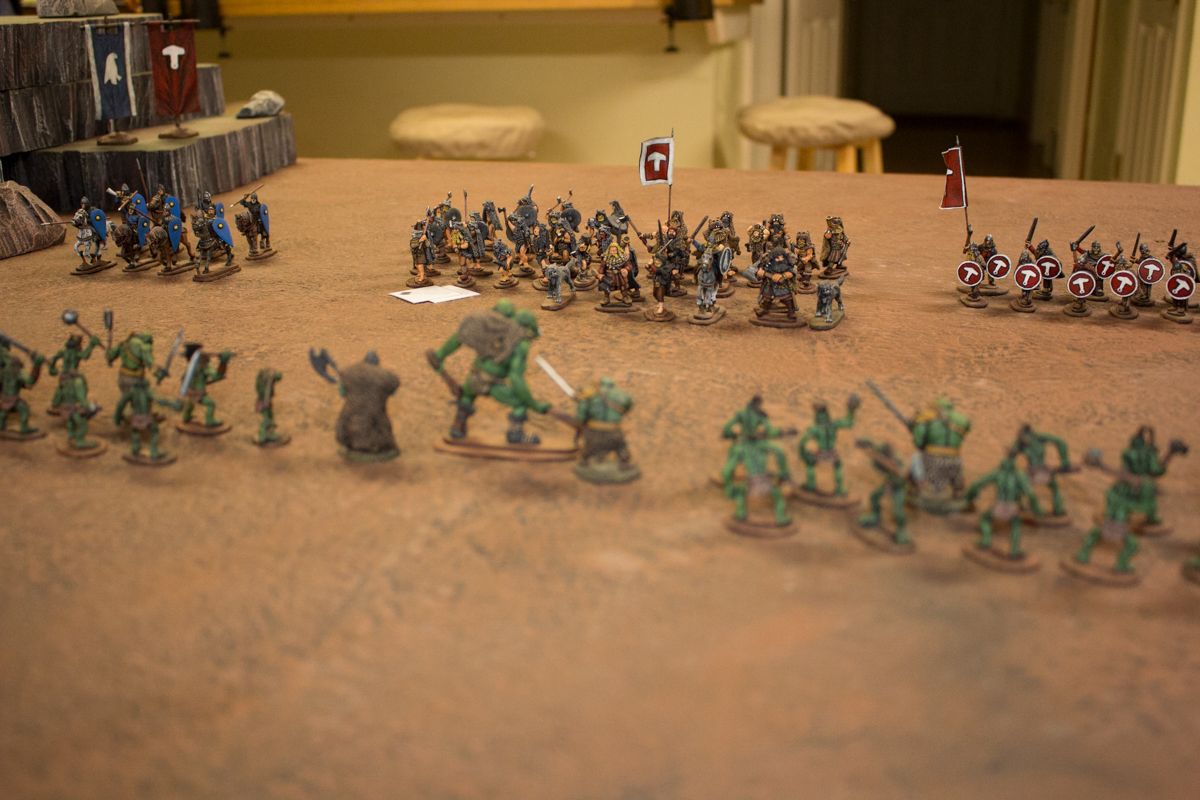 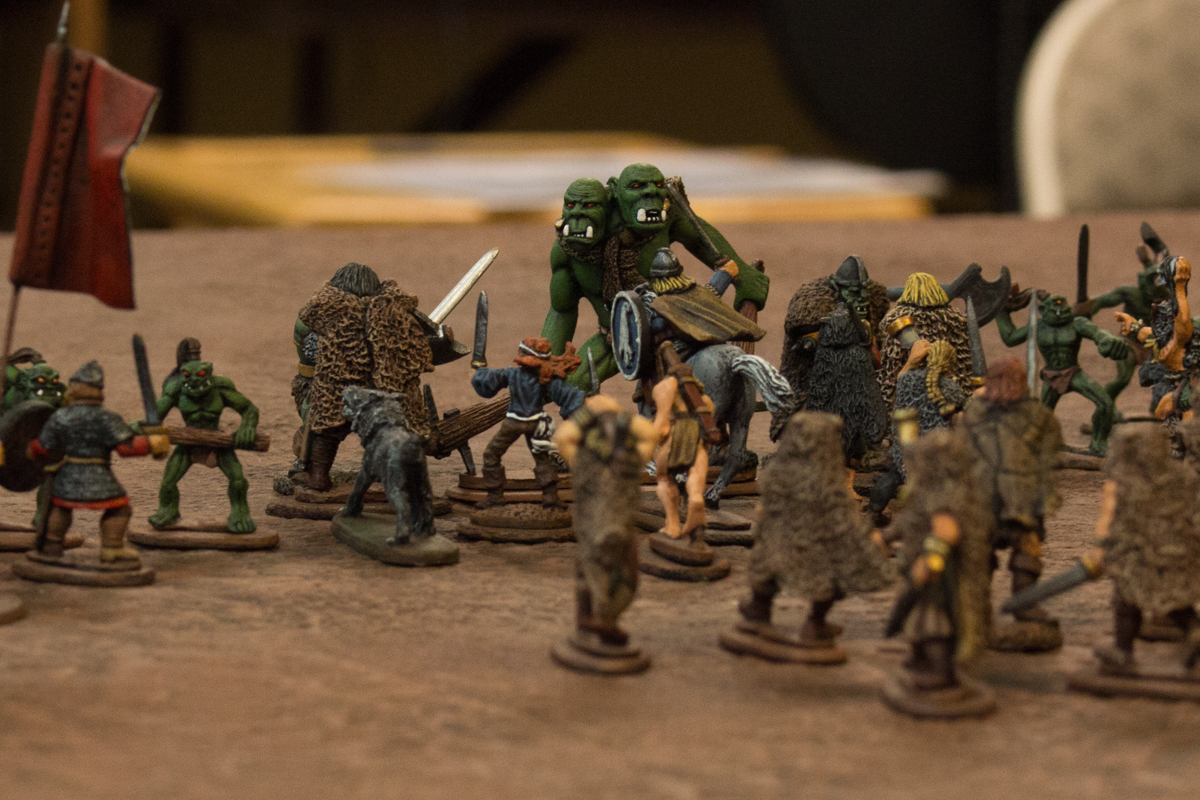 Wynston’s picked men ran up the hill in pursuit of the wild orcs and shaman. 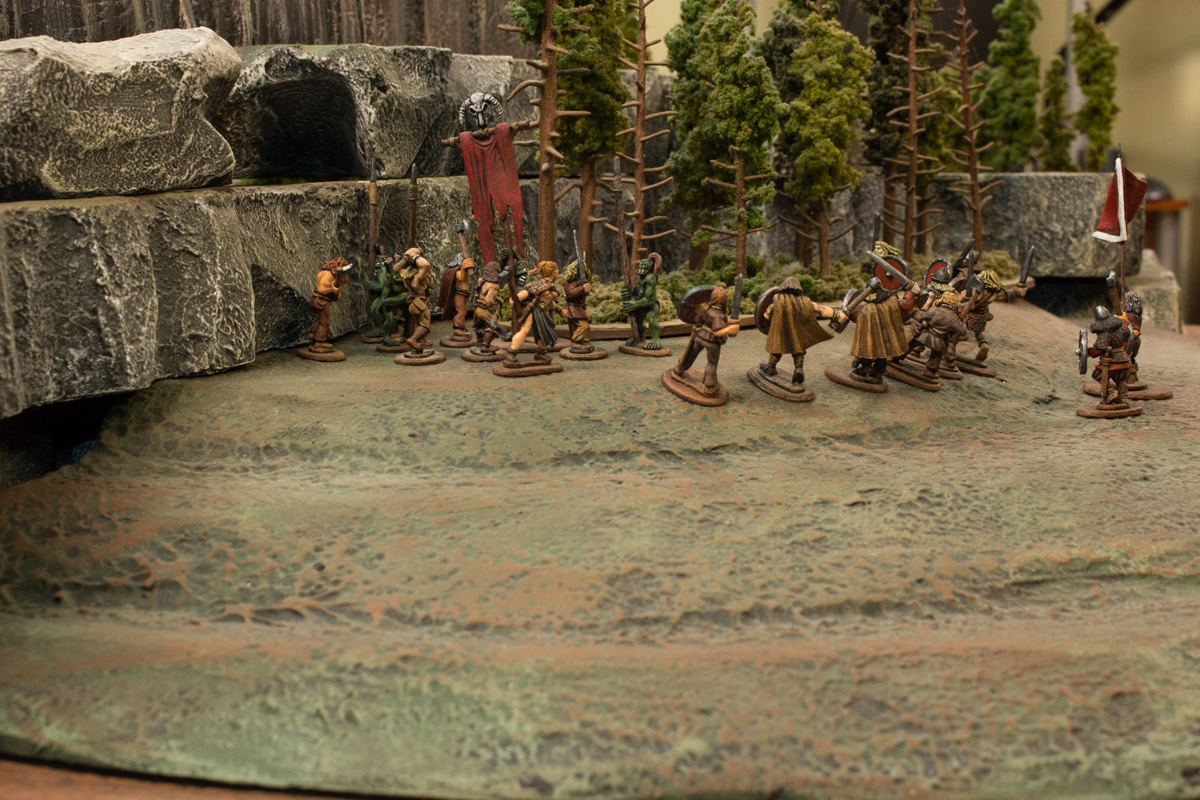 The shielded orcs lined up against the human cavalry on one flank, and the heavy infantry on the other.

The War-God held fast in the center against King Kvig, Wynston, and Bleddyn. 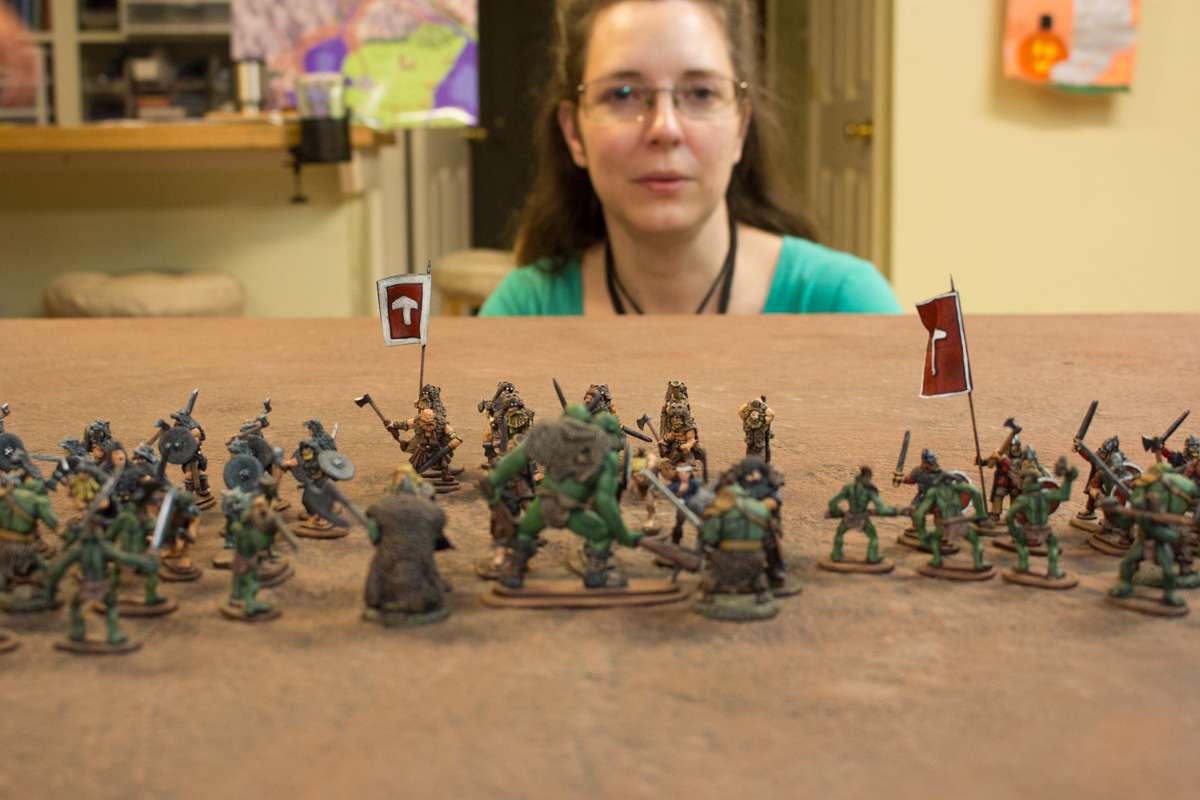 The Gautrians’ left flank was pushed hard by the armored orcs. 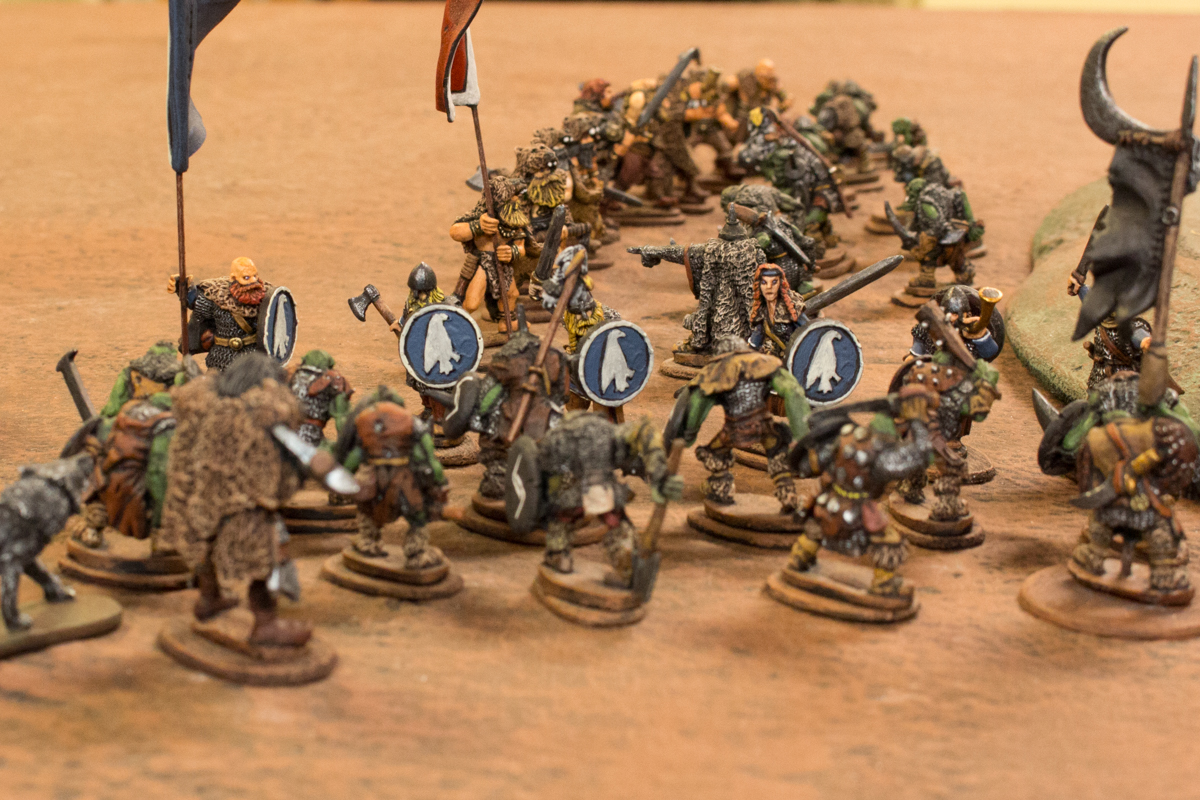 But it was not enough to threaten the integrity of Kvig’s line. 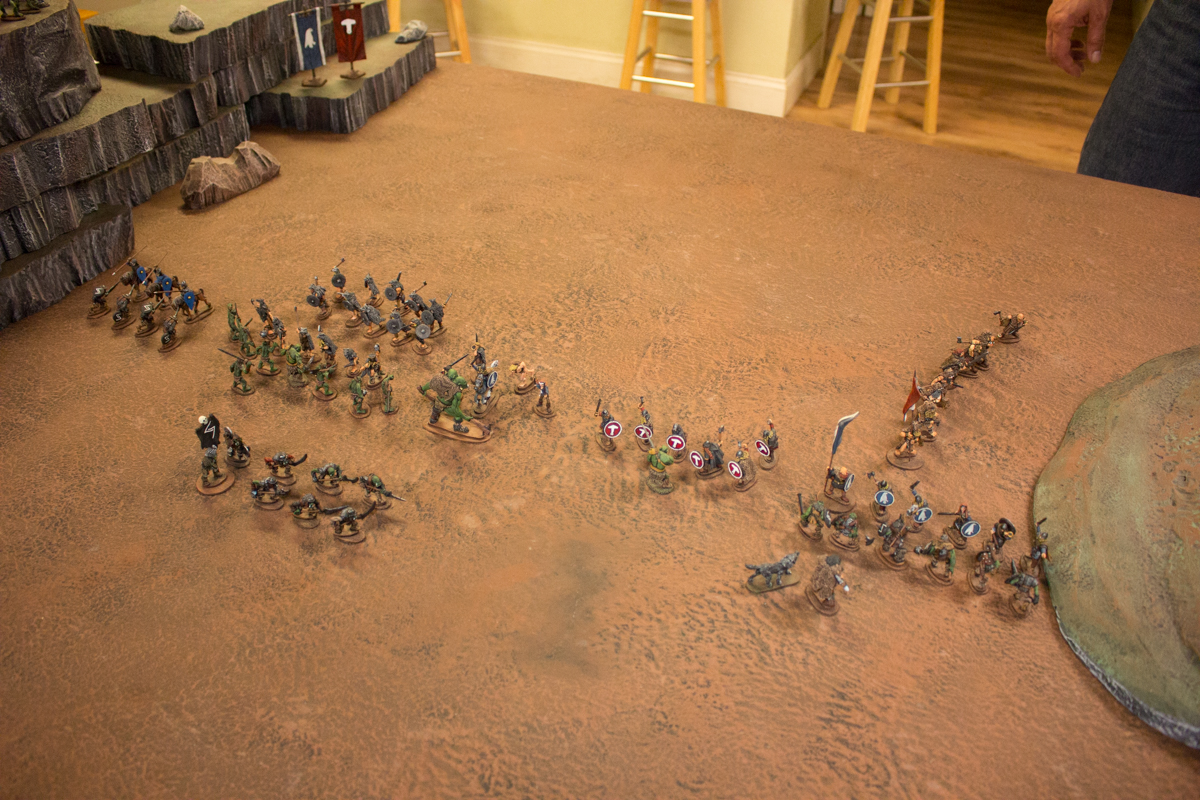 The unarmored orcs fell to the ulfhednar on the human’s right flank. 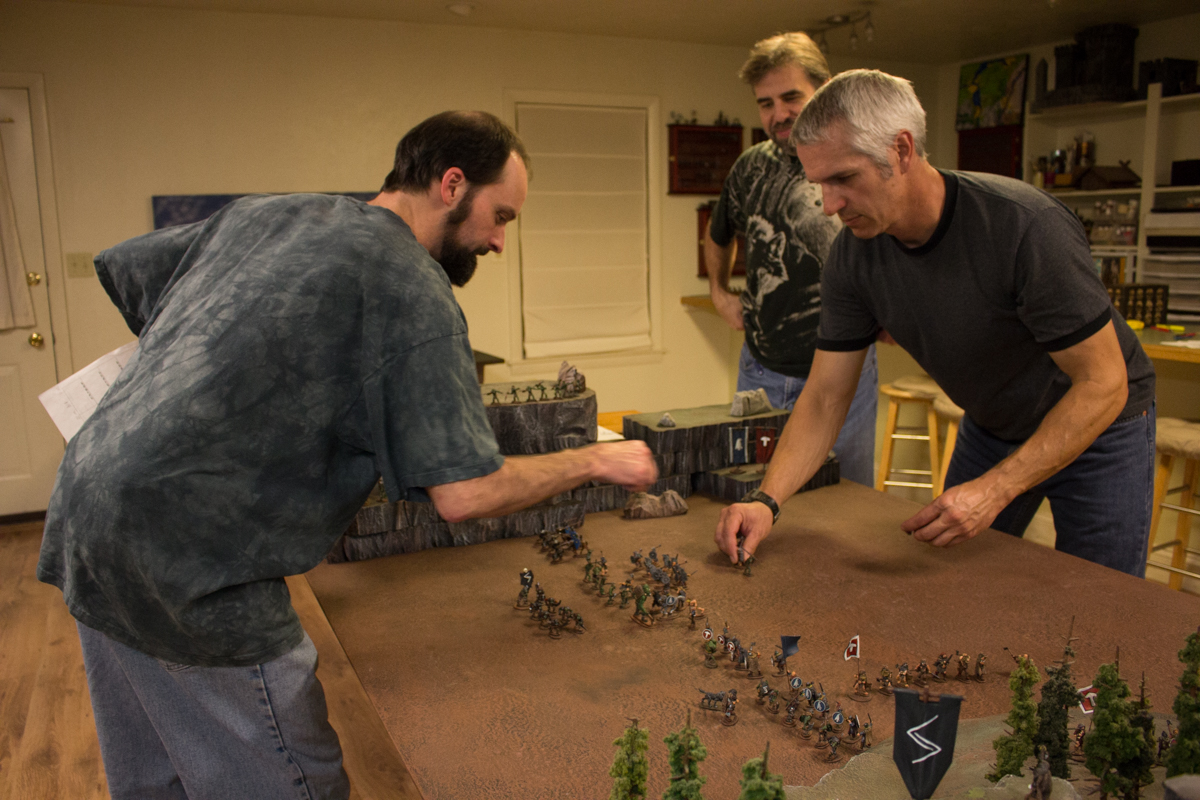 The wild orcs all routed, or were slain. The last kill was up to Wynston, Kvig and Bleddyn. 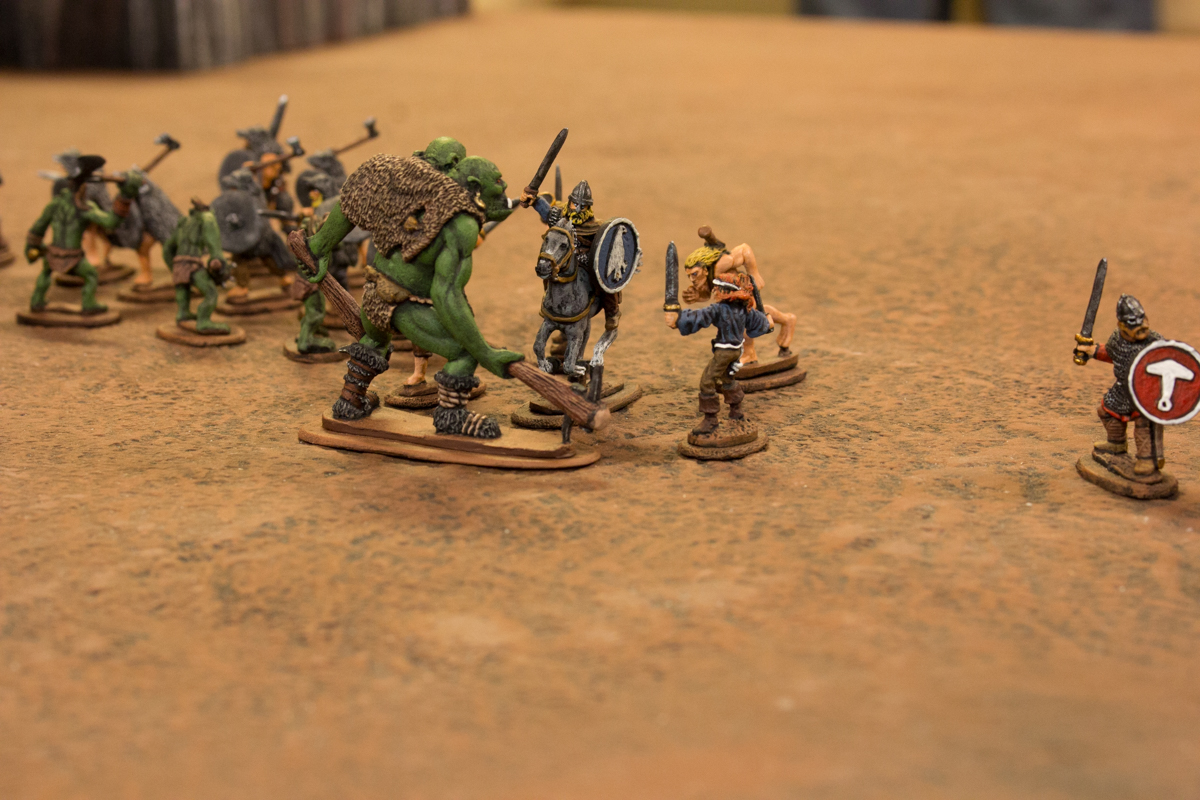 Soon, all that remained of the War-God were two severed heads waiting to be tied to Kvig’s saddle.

“They will return from their side of the mountains, King Kvig,” said Karlsefni. “You cut through their War-God in this battle, but the Varaks will send more fighters. On the other side of Hellgate pass lies their fortress of Langar. They have many of my people enslaved in that compound. Lead us there King Kvig, Orc-Slayer, and we will destroy their stronghold and keep the Varak orcs from returning to Gautria!”

Kvig thought for the briefest of moments before turning to his champion Bleddyn and minister Wynston. “There is only one way to push the orcs out of our lands. We must take the fight to them! To Langar!”

What will King Kvig find through Hellgate Pass? Will the Varak orcs fall before the advancing North Gautrian army? The adventures continue…